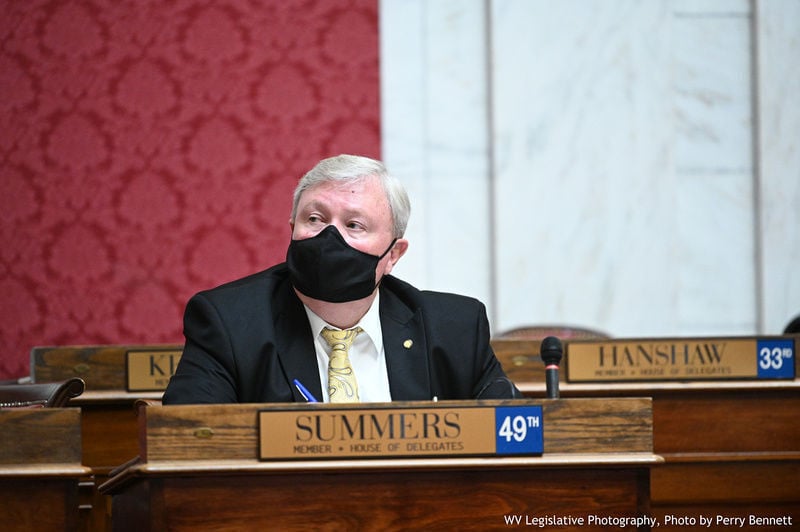 Rodney Miller, executive director of the West Virginia Sheriffs Association, listens to testimony on the state mental hygiene system May 10 in the House chambers. 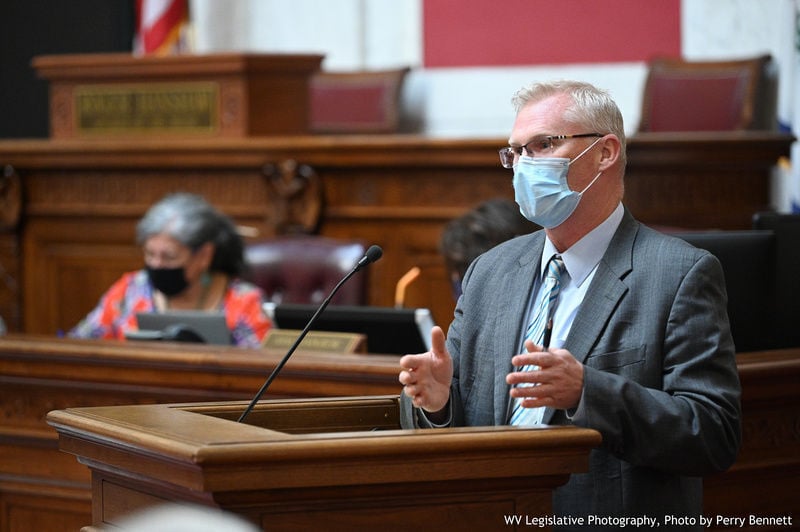 Rodney Miller, executive director of the West Virginia Sheriffs Association, listens to testimony on the state mental hygiene system May 10 in the House chambers.

Sheriff’s departments have long been overwhelmed by their mental hygiene order responsibilities, but a bill to help ease their burden by removing the medical clearance requirement died in the session as lawmakers with real-world experience expressed concern. Lawmakers are now using the interim to study the problem.

Sheriff’s departments are the sole entity responsible for executing mental hygiene orders. Deputies execute the order, transporting patients to psychiatric facilities sometimes across the state. But before they are taken to the psychiatric facility, patients must be medically cleared — something that has to happen at a hospital. This can result in hours of waiting with patients.

The Ohio County Sheriff’s Office estimates it costs more than $55,000 in not even a year to transport mental hygiene patients. Ohio County deputies must travel as far Princeton to find a bed sometimes, as Wheeling no longer has a psychiatric hospital.

“When we talk about the health and safety of a patient, is it in the best interest of a patient if an untrained deputy ... has custody? At least in our view, probably not,” Rodney Miller, executive director of the West Virginia Sheriff’s Association, told members of the Legislative Oversight Committee for Health and Human Resources Accountability on May 10. “We hear from deputies when things go bad. Inherently, you have a police officer is mean to mental hygiene patient when they handle them physically because that’s how they are trained.”

Miller said deputies receive five hours of training to deal with these types of mental health issues. The rest of the training is on the job from more experienced deputies.

Senate Bill 509, which passed the Senate but died in the House, would have removed the medical clearance requirement before a person is admitted to a psych hospital. The psychiatric facility would do a physical examination instead, and if it was determined they needed more care, it would be provided. It would have required the Supreme Court provide training for magistrates, mental hygiene commissioners and other examiners regarding medical conditions that mimic or cause psychiatrics presentation.

The model seemed to be based on how the system in ran in Randolph County, based off testimony Monday by Dr. Richard Kiley, a psychologist with Appalachian Community Health Center in Elkins. Kiley said for 40 years the county has done medical screenings, not clearances, before admittance. Medical clearance comes after the initial court case.

Lawmakers, particularly those in the House who are also medical professionals, disagreed with that process. Majority Leader Amy Summers, R-Taylor, an emergency medicine nurse, said Monday she feared removing the medical requirement would harm patients.

“I can’t just diagnose someone with hypertension just by looking at them,” Summers said. “If you have a brain tumor causing your psychosis, you need an MRI.”

Dr. Suzanne Holroyd, chair of the Department of Physiology and Behavioral Health at Marshall University and attending physician at Mildred Mitchell-Bateman Hospital, said the state psychiatric hospitals don’t have the capabilities to medically clear patients, even though they provide a wide range of medical care.

For example, Holroyd said, seniors with urinary tract infections can sometimes present with symptoms of psychosis. If a person with a UTI was not medically cleared first, their outcomes could end up much worse than if it was caught before they were admitted.

Kiley said the system works in Randolph County because they all work together, but as Miller said, it’s not really a statewide system. Each county runs the system differently.

According to information from the state Supreme Court, Randolph County only had 40 mental hygiene filings in 2020. Cabell County had the most in the state with 1,038 — down from 1,213 in 2019.

Paul Biser, Cabell County mental hygiene commissioner, said the high number is likely due to the fact there are three psychiatric hospitals in the county that accept state patients. If a patient is committed to Bateman, for example, from Wayne County and Bateman doctors decide the patient needs to stay longer than the 10 days permitted by law, they file a “final order” in Cabell County court. That starts a new case in Cabell County for that person, leading to higher case numbers. Patients are brought to Cabell County from all over the state.

Biser said he sees many problems with the system, including the timeframe of hospital stays. Psych hospitals have 10 days to determine if a person needs to be committed for 90 days. As commissioner, Biser must contact the person’s family by certified mail or in person before the commitment hearing. He said he typically has one or two days to contact them and have the hearing, which is nearly impossible to do, he said. In Cabell County, many of the patients’ families do not live in the county.

Then, if a hospital decides a patient needs to be committed longer than 90 days, they submit a letter to the court explaining why. A person could be kept in the psych hospital for up to two years based on just the letter, and it is on the patient to request a court hearing. Given the state of the patients, it is unlikely they have the ability or knowledge to request that hearing, or even know it is their right, Biser said.

From his perspective, the medical clearance process does not work, and can even lead to harming patients who need immediate psychiatric help.

Holroyd also agreed the system does not work, but said more work with all stakeholders needs to happen before laws are changed.

Several lawmakers committed to studying the issues during the interim, including Summers and Delegate Matt Rohrbach, R-Cabell, who said he would chair a sub-committee on the subject.

The discussion comes at a time as renewed calls for defunding the police and reallocating those resources for mental health services are being heard across the United States.