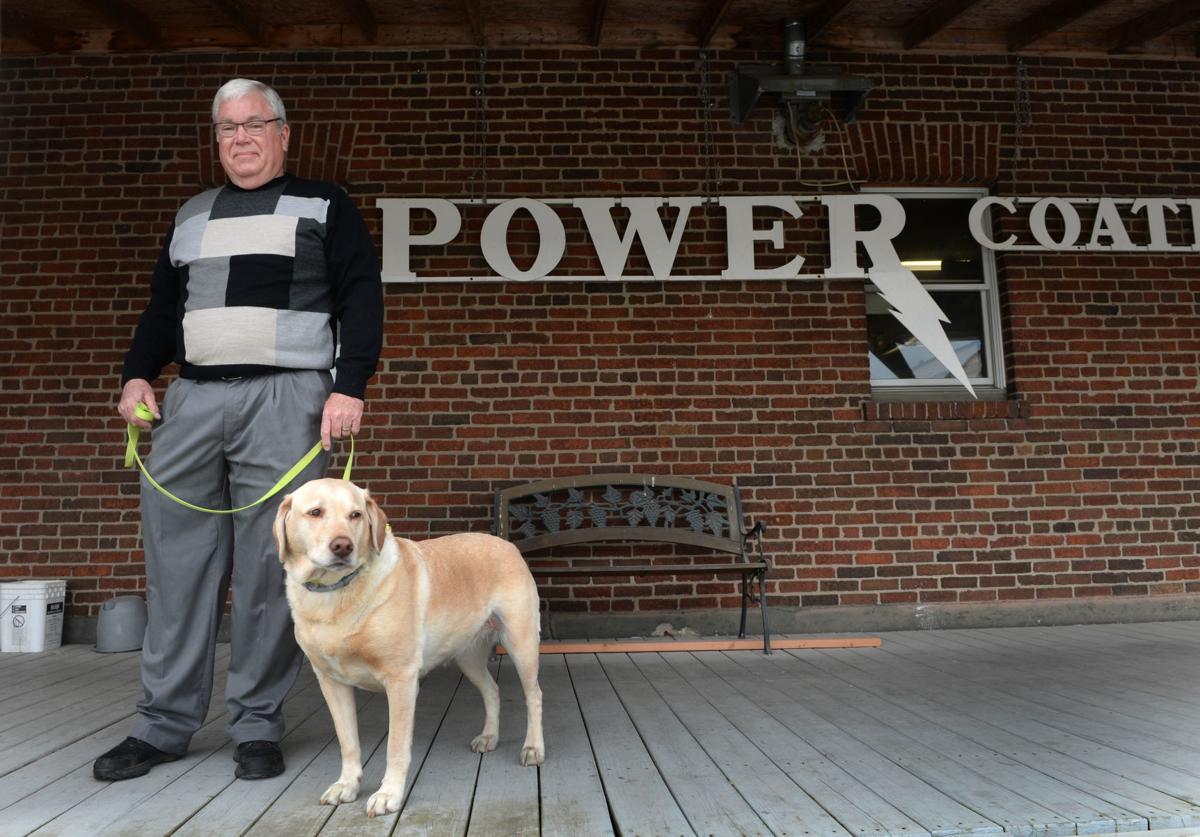 Bob Stephens, owner of Power Coatings Inc., in Nitro, stands with his dog, Daisy. Stephens, who lost his leg in a motorcycle accident when he was 19, is a newly certified peer visitor with the Amputee Coalition. 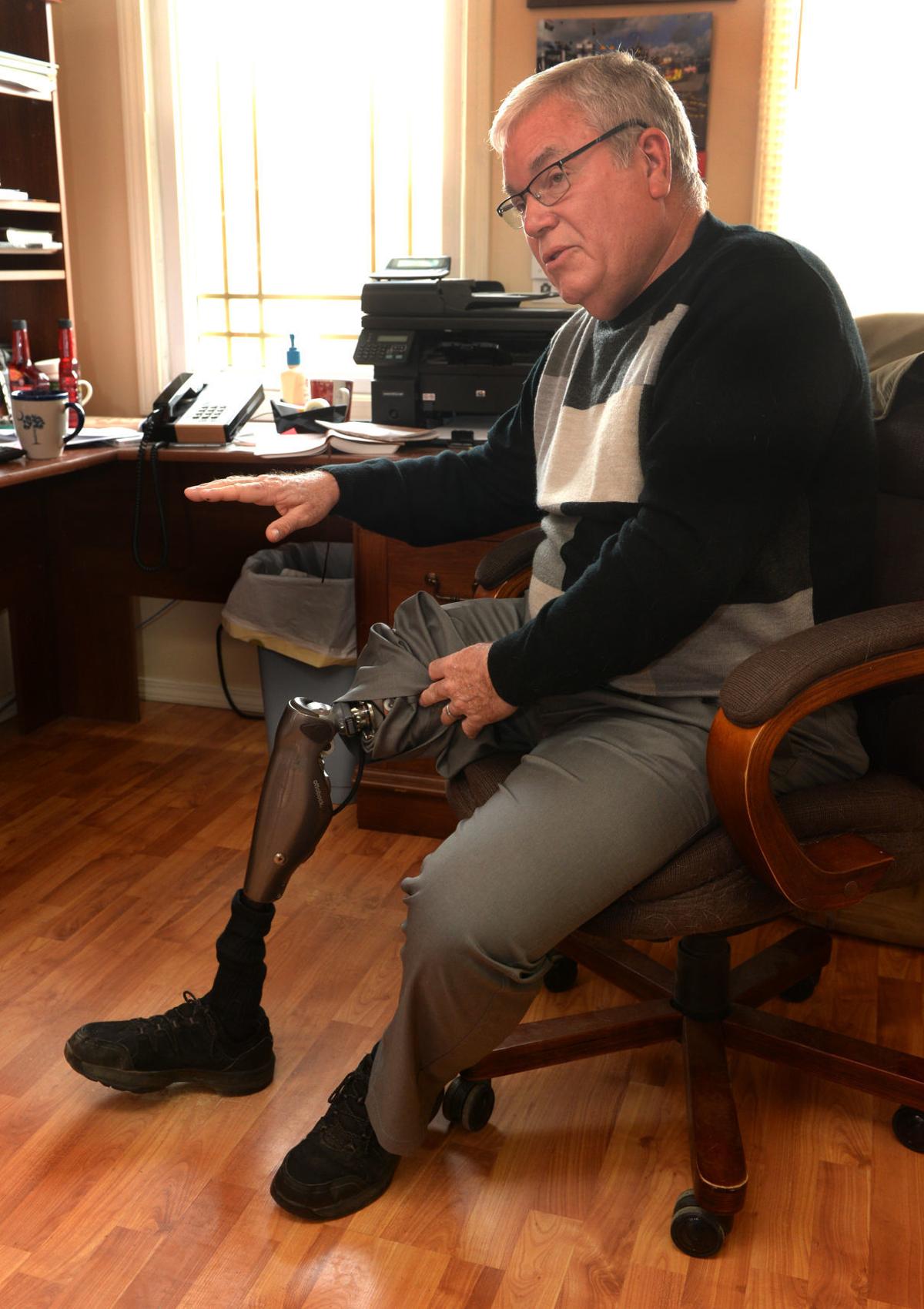 Bob Stephens shows his prosthetic leg. While his training through the Amputee Coalition is a new development, Stephens said he’s visited other new amputees to help them through the traumatic experience.

Bob Stephens, owner of Power Coatings Inc., in Nitro, stands with his dog, Daisy. Stephens, who lost his leg in a motorcycle accident when he was 19, is a newly certified peer visitor with the Amputee Coalition.

Bob Stephens shows his prosthetic leg. While his training through the Amputee Coalition is a new development, Stephens said he’s visited other new amputees to help them through the traumatic experience.

Bob Stephens has always felt there’s a reason his life was spared in a motorcycle accident that claimed his right leg above the knee.

Stephens, a 66-year-old Nitro business owner, lost the leg in the accident in August 1971. Stephens, then 19, was driving his girlfriend home from a visit to his parents when a vehicle driving on the wrong side of the road without its headlights on hit them head-on.

“I was hurt really bad,” Stephens said. “My leg was broken in five places. My knee was gone. The lady, her leg was broken, and that’s basically all that was wrong with her.

“The hit was so hard. I had a racing helmet on; it cracked the racing helmet and I looked like a raccoon where my safety glasses mashed against my face.”

The driver of the vehicle drove off and left them there.

As he lay in the road yelling for help, he remembers someone holding his head, telling him he would survive.

“Somebody come over and picked my head up and told me that I was going to be alright — ‘Bob, you’re going to be fine,’ and disappeared.”

Later in life, Stephens interprets the occurrence as a “spiritual intervention.”

Facing his leg’s amputation, Stephens recalled a neighbor up the street from his family’s house who had lost a leg in World War II. He spent time with the man, who was his best friend’s father.

“I always felt like that was my prep for what was going to happen to me in life,” Stephens said.

Now, as a volunteer certified peer visitor with the Amputee Coalition of America, Stephens will help other people who are going through the same thing he did 48 years ago.

He’s one of six people to complete training to be a certified peer visitor at a recent training event in Belpre, Ohio.

The Amputee Coalition is a national organization aimed at empowering those with limb loss through education, support and advocacy, and promoting limb loss prevention.

Peer visitors provide resource material to those who are new to limb loss and information about insurance coverage and material, said Nancy Miller, a representative of the Prosthetic Users Group, a Belpre, Ohio, support group that sponsored the certification training.

“Peer support is vital to recovery,” a news release about the training from Miller’s group reads. “Most amputees who have experienced the gift of a peer visit report this visit changed their life. A visit can help them from being overwhelmed and depressed. They realize if he/she can do it, I can do it. Often the recovery process is a blur, but looking back, the amputee can distinctly remember the affect the peer visit had on their lives.”

While the training is a new development, Stephens actually first visited with a new amputee in the first few years after his accident.

Back then, he was referred to people by word of mouth. Stephens said most of the people he visited with lost their limbs because of a complication related to diabetes.

He also recently met with a woman who lost her leg after being struck by a car on the East End of Charleston. He was referred to her by a friend from his church.

“When I talk to people, I usually tell them — and sometimes I’m too blunt — I say you either got to decide to get up or you’re going to be laying here the rest of your life,” Stephens said. “It’s tough. It’s kind of that tough love thing.”

Stephens said the hardest part of losing his leg was the job discrimination he faced after college.

“A lot of people wouldn’t take a chance on somebody with a prosthetic leg,” Stephens said. “That was probably the hardest part.”

Stephens has been the owner of Power Coatings Inc., an industrial painting business in Nitro, for about 30 years.

When he used to swim at a pool in Nitro, he said, he would draw the attention of the children there.

“When I take my leg off and get in the pool, every kid in the pool was there wanting to meet and greet and all that,” Stephens said. “So I felt like the Pied Piper. When I’d get out of the pool, I’d have all the kids with me.”

Stephens tells children who ask him about his leg that he had a motorcycle accident.

“Most of the time, I tell them ‘don’t ride motorcycles; they’re dangerous,’ ” he said.

For Stephens, helping people as a peer visitor is part of living out his faith. It’s a desire that’s grown throughout his life, ever since he felt the hand on his head after the accident.

“I always felt like God left me here, that I had a job to do,” Stephens said. “And what we’re supposed to do, if you read the Bible, is love and have compassion on people and help people.”

For more information on the Amputee Coalition, visit www.amputee-coalition.org.