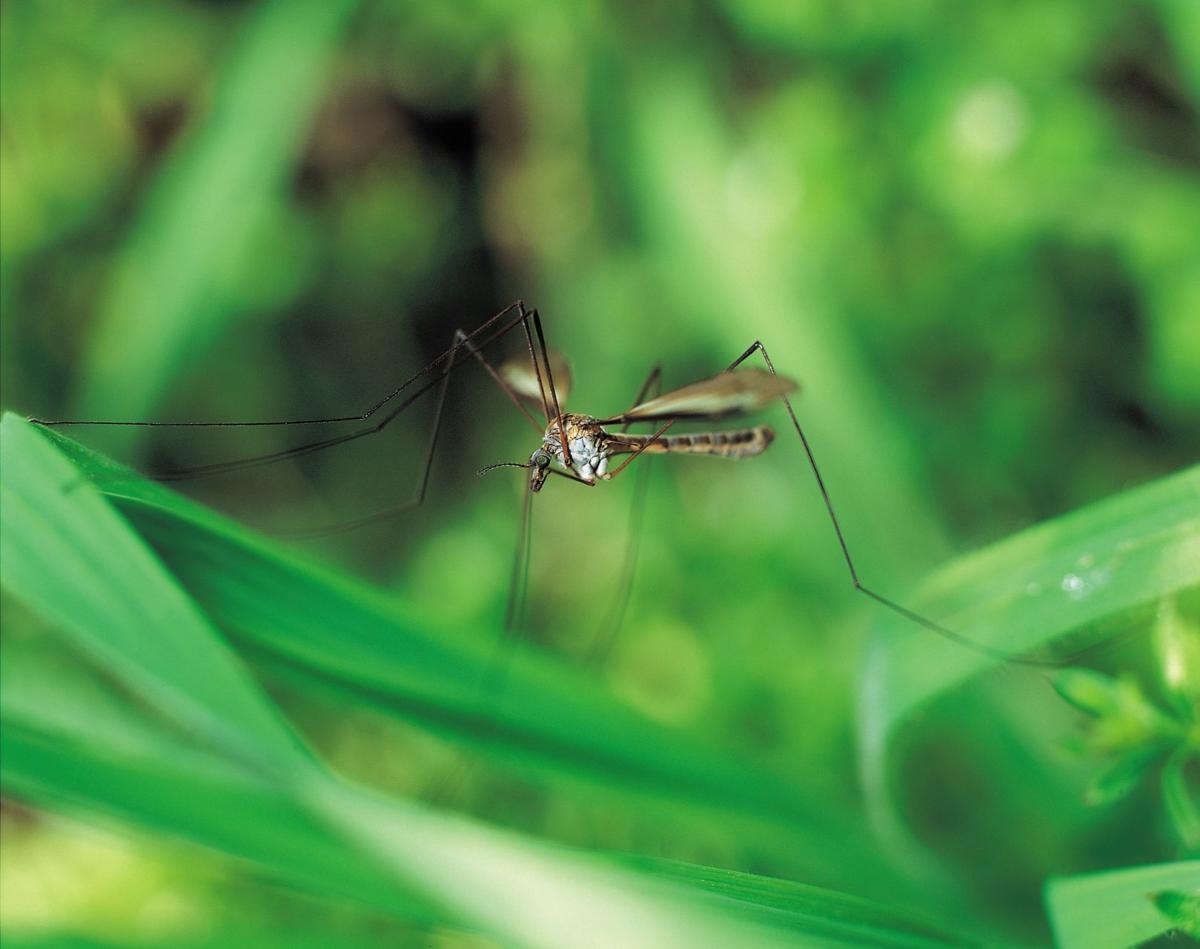 If people notice a larger presence of mosquitoes or ticks around their home, they should look around for shallow, stagnant water sources. This is where mosquitoes like to lay their eggs. 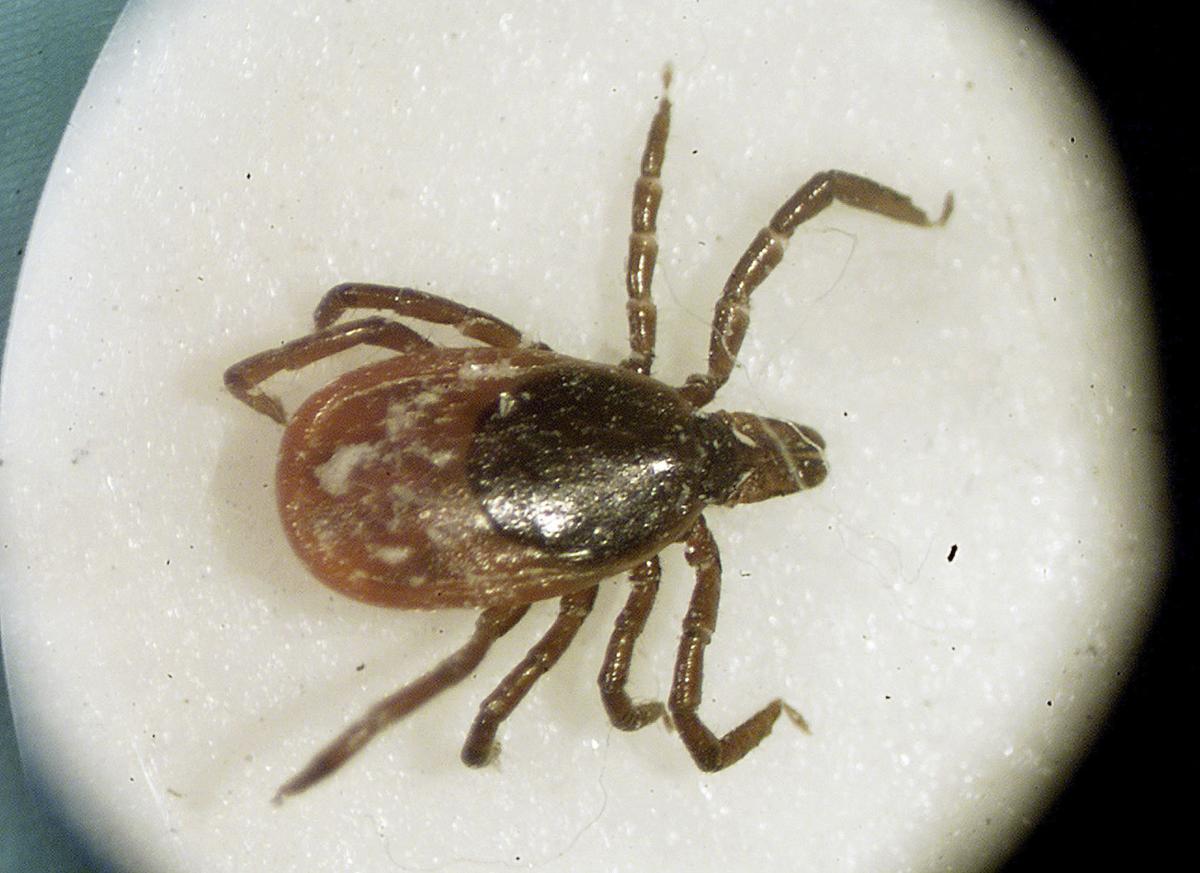 A deer tick is shown under a microscope in the entomology lab at the University of Rhode Island in South Kingstown, R.I., in 2002.

If people notice a larger presence of mosquitoes or ticks around their home, they should look around for shallow, stagnant water sources. This is where mosquitoes like to lay their eggs.

A deer tick is shown under a microscope in the entomology lab at the University of Rhode Island in South Kingstown, R.I., in 2002.

As summer heat picks up with wet weather accompanying, more mosquitoes and ticks are bound to be buzzing and crawling around homes and outdoor gatherings, presenting a nuisance but also a potential health risk.

Stanley Mills, the head of environmental services at the Kanawha-Charleston Health Department, said the risk of serious illness from the insects is relatively low, but not non-existent.

Ticks are best known for spreading Lyme disease. In recent years, Mills said, the number of Lyme disease cases in Kanawha County has been rising. The number of ticks, though, remains relatively consistent.

“We’re seeing about the same in general as we have in the past, but right now, with all the wet weather we’ve been having, it does seem the population is sky high,” Mills said. “If I go out in August, I probably won’t catch anything because it’s drier.”

Mills oversees a team of sanitarians and others at the health department who are responsible for annually trapping mosquitoes and ticks from around Kanawha County. Once captured, those insects are sent off to be tested for certain viruses.

While there are several ways to trap mosquitoes, most rely on replicating the “scent” — carbon dioxide — exuded by humans that attracts the insects.

Because of this, most of the mosquitoes caught are female. Given the rate of reproduction, each one caught makes a difference.

“There’s a compounding effect for each one you catch, because if half of one mosquito’s eggs are female, then they’ll give birth to 40,000 more, and so on and so on,” Mills said.

When the insects are sent for testing, it’s about more than checking for viruses. Scientists will also see if the insects have become immune to certain sprays and pesticides.

In Kanawha, no such immunity has been found.

“Our population monitoring doesn’t trigger treatment programs or spraying or anything like that. We can give some tips to help control [the insects] if we come out to your house and find a lot of breeding grounds or something like that,” Mills said. “It is comforting, though, knowing if we ever had an issue, we could use a pesticide.”

Though ticks are much different than mosquitoes, they tend to breed in similar areas: anywhere moist, preferably with higher grass, Mills said.

The tips to fending off the insects are also pretty similar, Mills said.

If people notice a larger presence of mosquitoes or ticks around their home, they should look for sources of shallow, stagnant water. This is where mosquitoes like to lay their eggs.

“Bird baths, drainage puddles, ponds, anything with a little bit of water,” Mills said. “If you look, you’ll probably be able to see the larvae wiggling around in it.”

To combat the insects, Mills says to dry out these water sources, or move them away from where people usually gather, if possible.

“If you’re sitting out there, inviting the mosquito bites and not trying at all to stop them or prevent it, well, shame on you,” Mills said.

When moving through long grass, people should tuck their pants into their socks and try to avoid exposing bare skin in order to avoid ticks.

If bringing pets with you, or if you have outdoor/indoor pets in general, Mills said it’s important to be vigilant, even if the animals receive regular tick treatments.

“Even if the ticks can’t latch on to the animal, they can carry it in, where it could try to latch on to you or other living things in the area,” Mills said.

Store-bought bug repellants can also work, Mills said. He prefers those that are botanical based, but people can choose whatever they feel works best.

When spending time outdoors this summer, Mills encouraged people to adopt “tick checks” for each other and themselves, meaning taking time to check everyone’s hair, exposed skin and private areas to ensure no ticks are latched on.

If an attached tick is found, Mills recommended slowly pulling it off — no need for a lighter or match, contrary to what many believe — and avoid panicking.

“Just because you found a tick attached doesn’t mean you’re going to get a disease,” Mills said. “But the longer it’s on there, the more likely you are to pick it up.”

Lyme disease is usually curable — as long as it’s caught — within a few weeks with a round of antibiotics. The most common symptoms include fever, headache and fatigue. Many people, though not all, will also experience a bullseye-shaped rash, and irritation or swelling at the site of the bite.

West Nile virus can present with similar symptoms — minus the specific rash — as well as body aches, joint pain, vomiting and diarrhea, among other things.

When the health department conducts its population monitoring for both mosquitoes and ticks, they ensure local physicians know what viruses are present so they can flag any patients who come in complaining of the symptoms, Mills said.

With detection and treatment, people diagnosed with West Nile virus or Lyme disease can usually make full recoveries, Mills said. Symptoms, though, can persist for weeks or months afterward.

This is why prevention is the best — and safest — method.

“I’ve been doing this for 40 years, and I’ve never picked up a disease. I never picked up anything because I don’t allow myself to be bitten,” Mills said. “I don’t think people should change what they do, but they should be aware. I think people are generally safe, as long as they pay attention.”