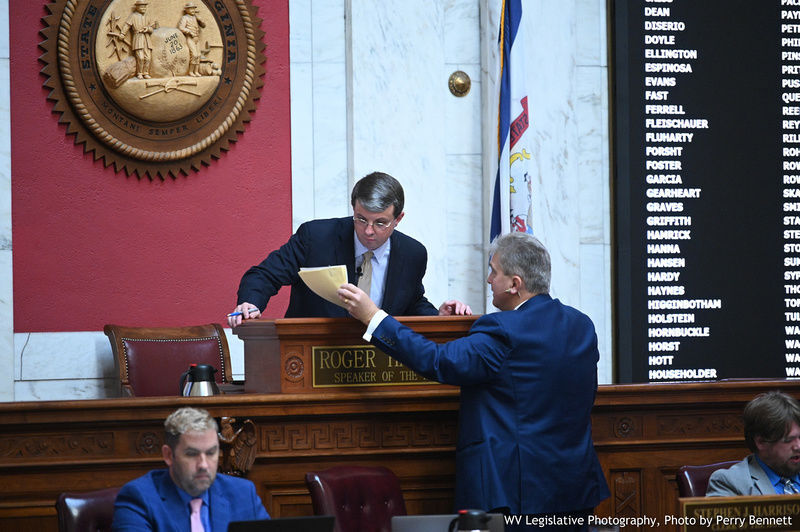 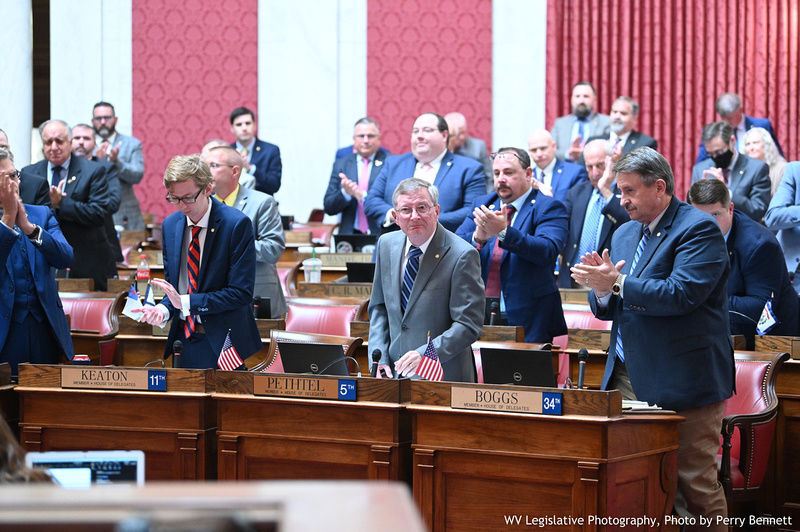 Members of the West Virginia House of Delegates give a standing ovation to Delegate Dave Pethtel, D-Wetzel, Monday in the House chamber. Pethtel announced Wednesday he would not seek re-election to the House in 2022, ending his 30-year tenure in the statehouse. 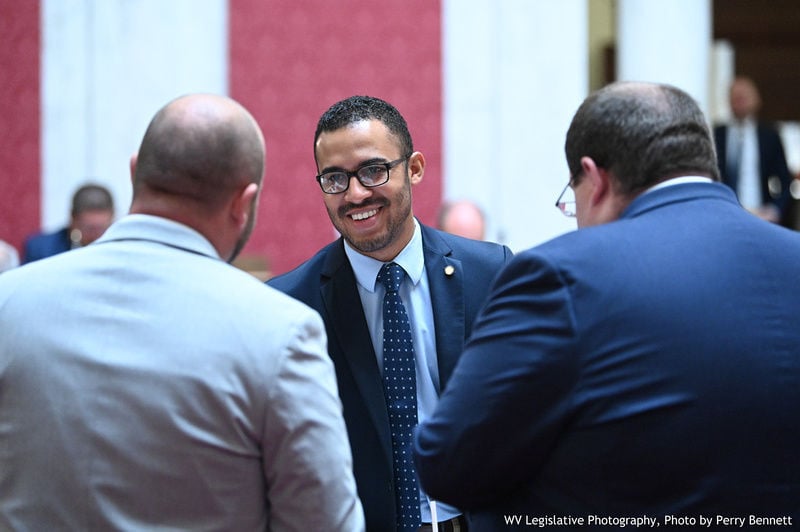 Members of the West Virginia House of Delegates give a standing ovation to Delegate Dave Pethtel, D-Wetzel, Monday in the House chamber. Pethtel announced Wednesday he would not seek re-election to the House in 2022, ending his 30-year tenure in the statehouse.

Before the West Virginia House of Delegates adopted a House district map Wednesday, two delegates announced they wouldn't seek reelection and others accused each other of racism and gerrymandering.

The House ultimately adopted House Bill 301, which is the bill that contains the House district map, in a 79-20 vote after two hours of debate Wednesday afternoon.

It was the first House District Map in decades to have 100 single-member districts, in keeping with a law the Legislature passed in 2018.

“The Joint Committee on Redistricting worked very hard all summer and fall to craft a plan that will give every West Virginian an equal voice in the House of Delegates,” House Speaker Roger Hanshaw, R-Clay, said in a news release Wednesday afternoon. “This plan will result in representation in the House that is both more uniform and more equitable for every citizen of the state.”

House Redistricting Chairman Gary Howell, R-Mineral, said the House had to work with population loss and shifts in population and areas of economic interest in the state to draw the map.

“We’ve taken great care to keep counties and municipalities whole as much as possible where it’s been requested, and you’ll see a few instances when the opposite was asked of us,” Howell said. “We’ve also tried to be mindful of communities of interest as much as possible, and those are considered to be groups of any size with similar interests, concerns and values.”

Debate about the map largely hinged on accusations from Democrats of gerrymandering and what Delegate Lisa Zukoff, D-Marshall, said was “Republican veto power,” on a one-on-one basis among delegates.

The House adopted the map after rejecting six proposed amendments from House Democrats that mostly would have altered a handful of districts in the delegates’ home counties.

House Minority Leader Doug Skaff, D-Kanawha, said the map had a higher rate of Democrat incumbents running against each other than Republican incumbents, saying single member districts were a step forward for the state, but the way they were drawn pushed parts of the state backward.

"We were inconsistent," Skaff said. "I know it's a hard, long process, and I respect everybody who was involved, but it's unfortunate that we actually had single member districts, like Wetzel County, that already existed and were broken up. It seemed like someplace in the state we went backwards, and in other places we made strides."

Skaff is the president of HD Media, parent company of the Charleston Gazette-Mail.

The debate about the actual map turned into accusations of racism from members of both parties, part of a ripple effect of learning that the House Redistricting Committee redrew a district line to prevent Delegate Caleb Hanna, R-Nicholas, who is Black, from being in a district with the National Alliance, a white supremacy group with its worldwide headquarters in Pocahontas County.

Delegates throughout the week have described the group as being fairly inactive with only a few members.

Other speakers at the morning hearing in the House chamber asked lawmakers to keep communities of interest, whether it was entire cities and towns or communities with similar economic and social interests, intact. Most speakers had addressed lawmakers in various redistricting public hearings throughout the summer and requested specific border changes in certain parts of the state to maintain their communities.

The Legislature is under a tight schedule to complete redistricting before Nov. 8, the residency deadline for people wishing to seek public office in their respective districts.

State lawmakers are drawing the maps amid a nearly 2-year-old pandemic that delayed the release of census data by four months, and they are compensating for the highest rate of population loss in U.S. over the past decade.

The most heated portions of debate Thursday came in the form of accusations of racism over two issues.

The first issue came earlier this week when House Analyst Jeff Billings told members of the House Redistricting Committee that at least two districts involving Pocahontas, Nicholas, Webster, and Greenbrier counties were redrawn to prevent Hanna, who also is the youngest delegate in the House, from being the incumbent delegate in a district that included the National Alliance white supremacy group.

On Monday, Hanna and Delegate Brandon Steele, R-Raleigh, told the Gazette-Mail they had discussed the matter, and Steele made the request to change the district, saying “it would be inappropriate and irresponsible to put him in a situation where he’s possibly at-risk.”

Delegate Evan Hansen, D-Monongalia, referred to that incident as well as Swint displaying the Confederate flag in the House chamber Wednesday, saying “the majority of West Virginians and the overwhelming majority of people in this Legislature don’t support that type of action, doesn't support racism or things like that.”

Under questioning from Hansen, Delegate Todd Longanacre, R-Greenbrier, took that time to say the House Redistricting Committee did a good job, and turned his attention to comments made by Delegate Kayla Young, D-Kanawha earlier during debate.

“[The map] was done with the population in mind,” Longanacre said. “I’ve sat here today and heard people insinuate it should have been done based on ethnicity. I think that’s the most racist think I’ve heard in this chamber, and it should be done based on population.”

“That’s a community of interest, and those people deserve to vote together,” Young said.

The House rejected her amendment, which attempted to make whole Institute, South Charleston, and Dunbar within their respective districts.

Delegate Danielle Walker, D-Monongalia, the only Black woman in the West Virginia Legislature, spoke about her experiences with racism, which include having eggs thrown at her home and threats of assassination so serious that she has contacted the FBI three times since being in office.

“I don’t think any of us were going to introduce an amendment where our colleague would be placed near that headquarters,” Walker said. “What are we telling our future leaders and our present leaders when they choose to put their name on the ballot? How many other headquarters like this exist in West Virginia?”

The House debate for the House map opened in a straightforward fashion with Howell describing the bill.

The first person to speak about the bill was Delegate Dave Pethtel, D-Wetzel, who has served in the House for 30 years.

Pethtel said he expected changes to his district due to population loss in Wetzel County, and he had gone back and forth for the last year about whether to run again.

“I prayed about it and asked the Lord to give me a clear sign as to what I should do,” Pethtel said. “When I saw the first draft map that put Wetzel into four districts and the gentlelady from the fourth, who I have great respect for, Delegate Zukoff and I were in the same district, I knew that was my sign to retire. I will not seek re-election in 2022.”

Del. John Doyle, D-Jefferson, announced he would not be seeking reelection as he proposed an amendment to the bill Tuesday, saying that his new district was impossible to win with or without his amendment.

Debate after Pethtel’s speech harkened back to comments Zukoff made during the debate about an amendment she proposed.

Zukoff told the House that she was told delegates should work with one another relative to their districts and counties to draw district lines.

"We were told, ‘Work with your colleague in your area,’ which in my case happens to be a Republican, and if they approve the changes, we’ll make the changes on the redistricting map,” Zukoff said. “So in essence what you did, if there were a Democrat and a Republican in the same district, you gave the Republican veto power. That’s not how this is supposed to work.”

After Zukoff’s amendment was rejected and during the debate about adopting the bill, Delegate Daniel Linville, R-Cabell, said Democrats had every opportunity to offer amendments and communicate their concerns but didn’t before Wednesday.

“It sounds like the left hand doesn’t want to know what the right hand is doing,” Linville said.

Delegate Larry Rowe, D-Kanawha, and Walker were among the delegates who asked the Legislature to consider legislation to establish a nonpartisan redistricting committee for the 2031 redistricting process.

Delegate Mike Pushkin, D-Kanawha, also asked for a nonpartisan commission, and went on to call the House map ”a gerrymandered mess” that was created only to protect political power “relative to one side.”

Update: This story has been updated to reflect that two delegates, Dave Pethtel, D-Wetzel, and John Doyle, D-Jefferson, announced they would not seek reelection to the West Virginia House of Delegates on Tuesday.

Relative to the day before it, Tuesday was a slow day for the redistricting process in the West Virginia Legislature.

How to improve your credit score in the New Year [Infographic]

How many couples make long-term financial decisions together? Just 20%