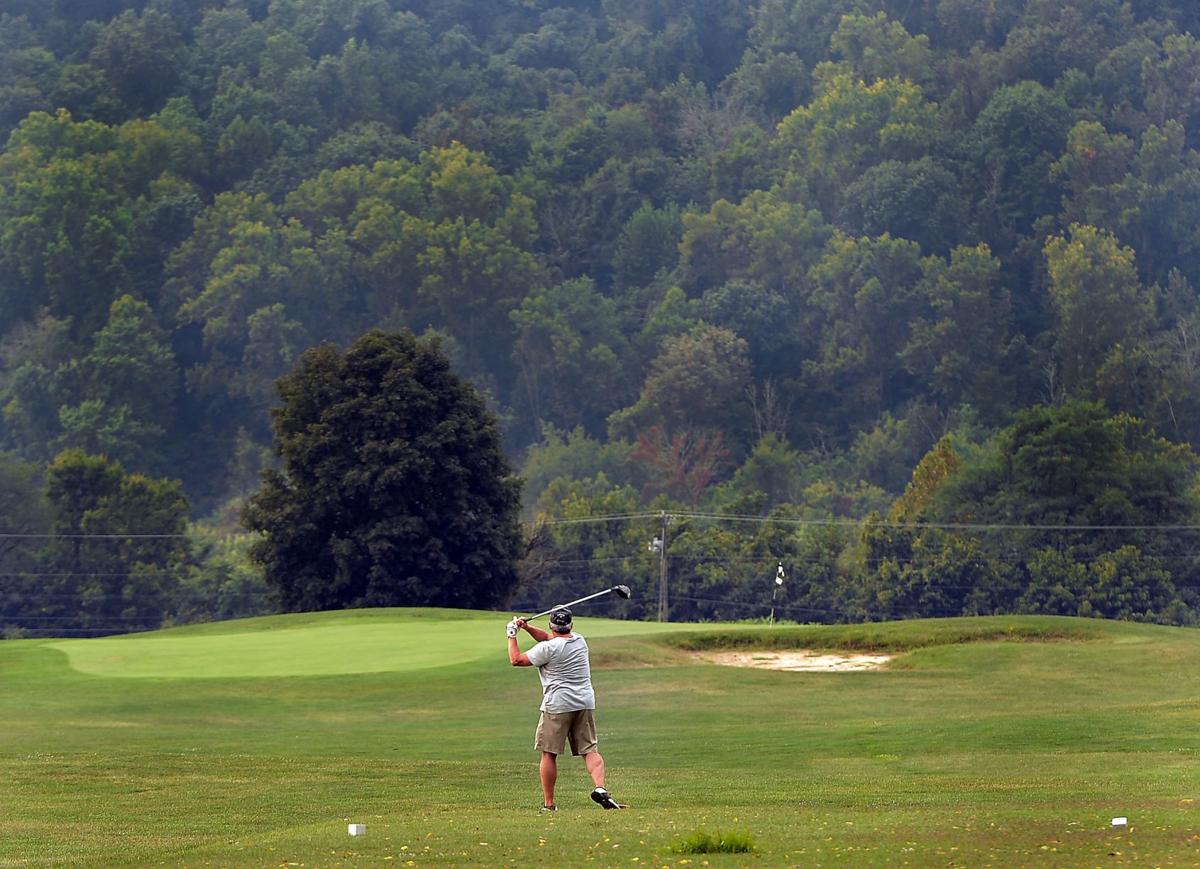 A golfer tees off Tuesday morning at Shawnee Regional Park golf course. The Kanawha County Commission on Tuesday voted to officially move forward with a plan to build a multi-sport complex at the park, which will require closing the golf course. 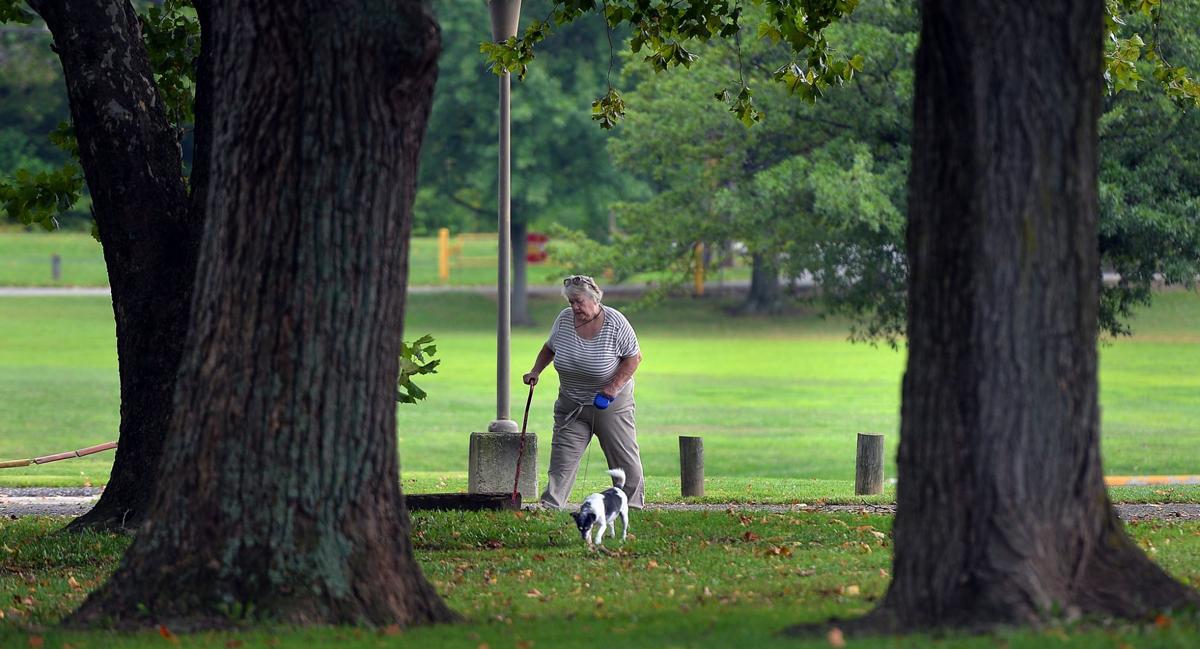 Elke Boyd walks her dog “Jaccy” around Shawnee Park on Tuesday morning. “I like this park the way it is,” Boyd said, referring to plans to turn the park into a sports complex.

A golfer tees off Tuesday morning at Shawnee Regional Park golf course. The Kanawha County Commission on Tuesday voted to officially move forward with a plan to build a multi-sport complex at the park, which will require closing the golf course.

Elke Boyd walks her dog “Jaccy” around Shawnee Park on Tuesday morning. “I like this park the way it is,” Boyd said, referring to plans to turn the park into a sports complex.

After hearing from an engineer hired to review chemical tests at the project site, Kanawha County commissioners on Tuesday gave final approval to build a multi-sport complex at Shawnee Park.

At a special meeting Tuesday morning, Ashok Sanghavi of S&S Engineers told commissioners he has no reservations with the commission’s plan to building the sports complex where tests determined there are chemicals.

“Basically, our recommendation to you is that since the land use doesn’t change — [it’s] basically the same as today with the golf course versus a multi-sport complex, it will be very similar in use,” Sanghavi said. “So we have no reservations.”

The project will include putting in several turf and grass soccer/lacrosse and baseball/softball fields at the park. That will mean closing the park’s golf course. The commission plans for the complex to host several travel tournaments as well as games and practices from local kids’ sports teams.

Additional testing done at the request of the commission indicated that the chloroform concentrations decrease radially in all directions from the maximum detected location in the soil vapor. The chemical was not detected in an ambient air sample at the park.

Dow Chemical agreed to fund the chemical tests and an “independent consultant’s evaluation” at Shawnee Regional Park after nearby West Virginia State University sued the company alleging that decades of chemical manufacturing at the Institute plant contaminated the groundwater beneath its campus. In its lawsuit, the school said the chemicals don’t pose a risk to human health but harms the school’s reputation and future development plans.

Commission president Kent Carper said State’s situation is different than State’s because the school wants to build buildings at its property, which would require digging deep into the ground. Putting in the sports complex will not require that, Carper said. A spokesman for West Virginia State University didn’t respond to an email requesting comment about what kind of projects the school has planned.

Carper said the commission has reserved the right to sue the chemical company to remove the chemicals in the future, should it deem it necessary.

Carper said Sanghavi’s opinion on the project might have been different if plans were to change the land use at the park.

“I think [Sanghavi] may have given us different advice if we decided to build a parking garage and build two or three stories into the ground,” Carper said. “He’s cautioned us not to tamper with the groundwater.”

Sanghavi said he will design a type of barrier to keep the contaminates in the ground contained. Dow will pay for the barrier, Carper said. Sanghavi will continue to monitor the project and can tell the commission to stop it if he sees something he doesn’t feel is safe, Carper said.

While an estimate said the sports complex would cost approximately $15 million, Carper said the project may change depending on the money available. The commission has already voted to obtain $10 million in bonds. Commissioner Ben Salango has said grants and donation funding will also be used in the project.

A few people came to the 8 a.m. meeting to voice concerns about the chemicals and traffic related to the project. Carper pointed out that the people who expressed concerns about chemicals were also golfers at Shawnee.

Salango said he understands the concerns about closing the golf course and the chemicals.

“The up side of this project is tremendous,” he said. “The economic impact on the community. You cannot have economic development without some sort of investment and this is a considerable investment not just for the community economically but also for the kids, socially.”

Salango said he didn’t see a reason not to move forward with the project.

The commission on Tuesday also voted to pay off early the rest of what it owes on the construction of the bridge at Coonskin Park. The commission owes $1.8 million to the state of West Virginia for the bridge, but in paying it off early, will save $300,000 and free up debt service for the Shawnee complex project

The Central West Virginia Convention and Visitors Bureau, which had been making payments on the bridge, will continue to make payments, but the money will go toward paying down the debt on the sports complex, Carper said.

The commission will use $1 million from its coal severance fund and $500,000 from its financial stabilization fund to pay off what it owes on the bridge.

Carper said the commission will not close the Shawnee Park golf course until it absolutely has to in order to start construction on the project.

Adam Krason of ZMM Architects and Engineers, which is designing the project, said bids for the project would likely be accepted in October.