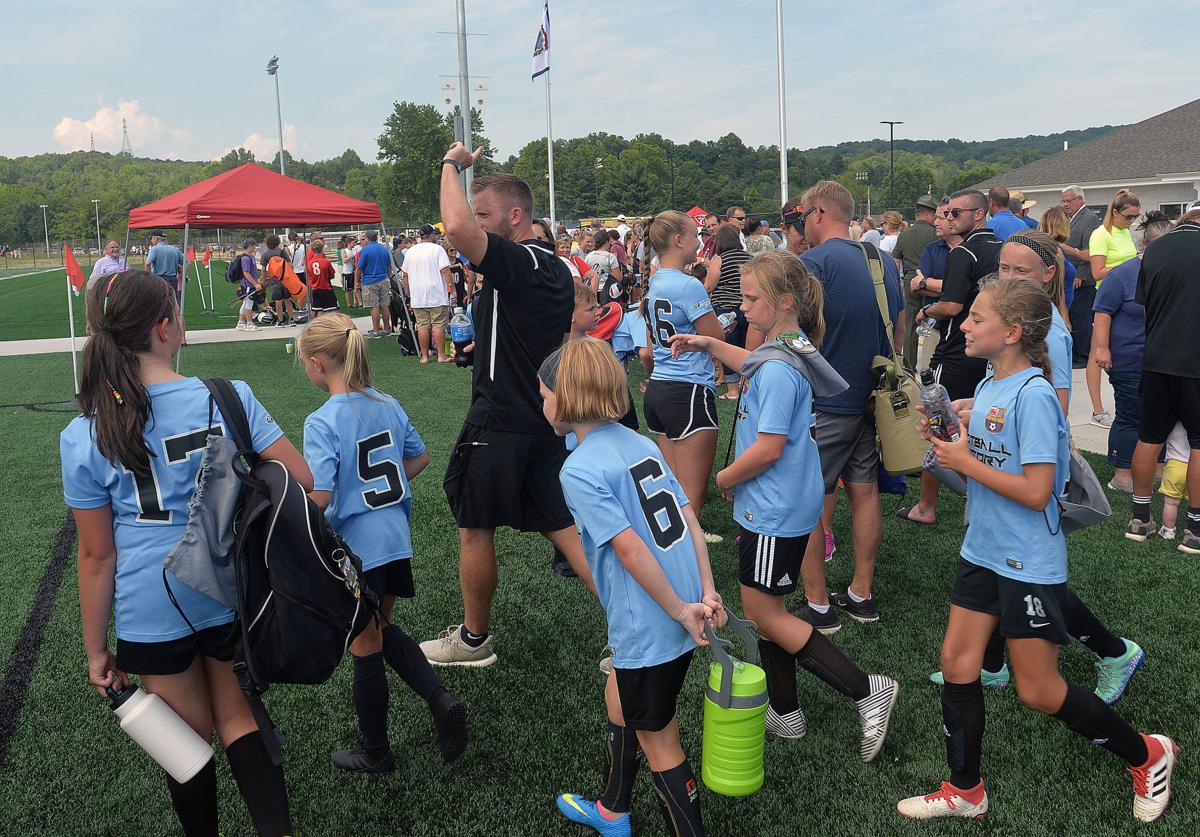 Youth soccer players take to the field Tuesday after the opening ceremony for the Shawnee Sports Complex. While the soccer, football and lacrosse fields are finished, four collegiate-size baseball and softball fields with turf infields and grass outfields still are under construction. Several grass practice fields will also be ready for use in the coming months. 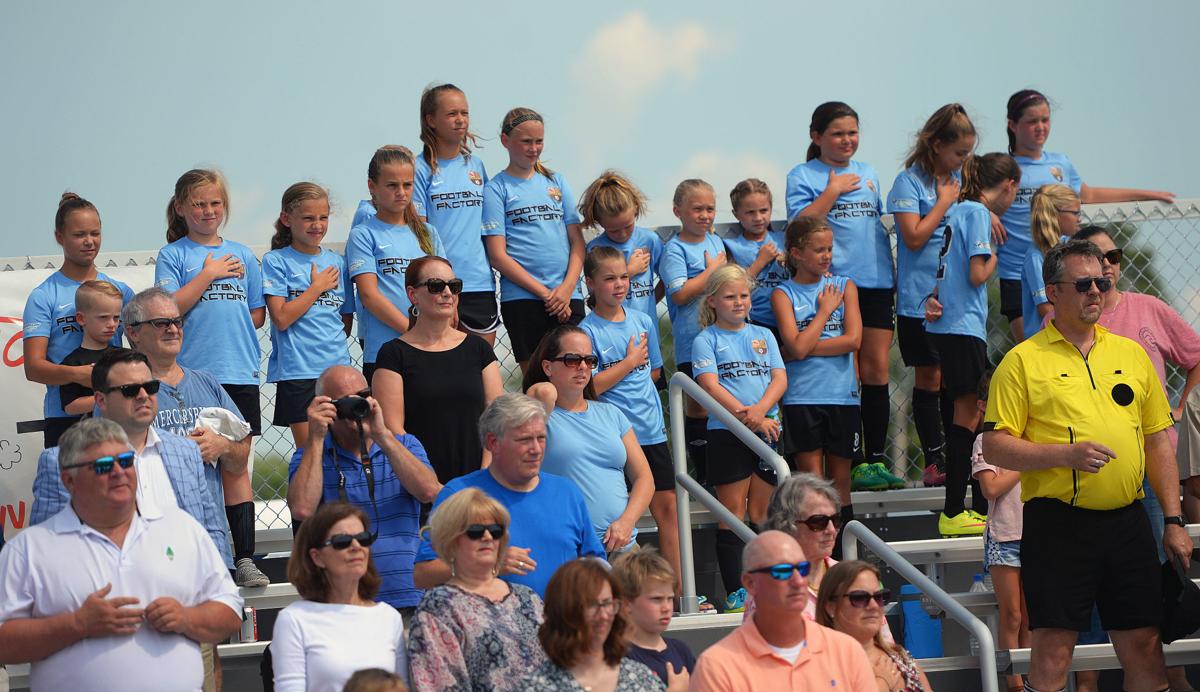 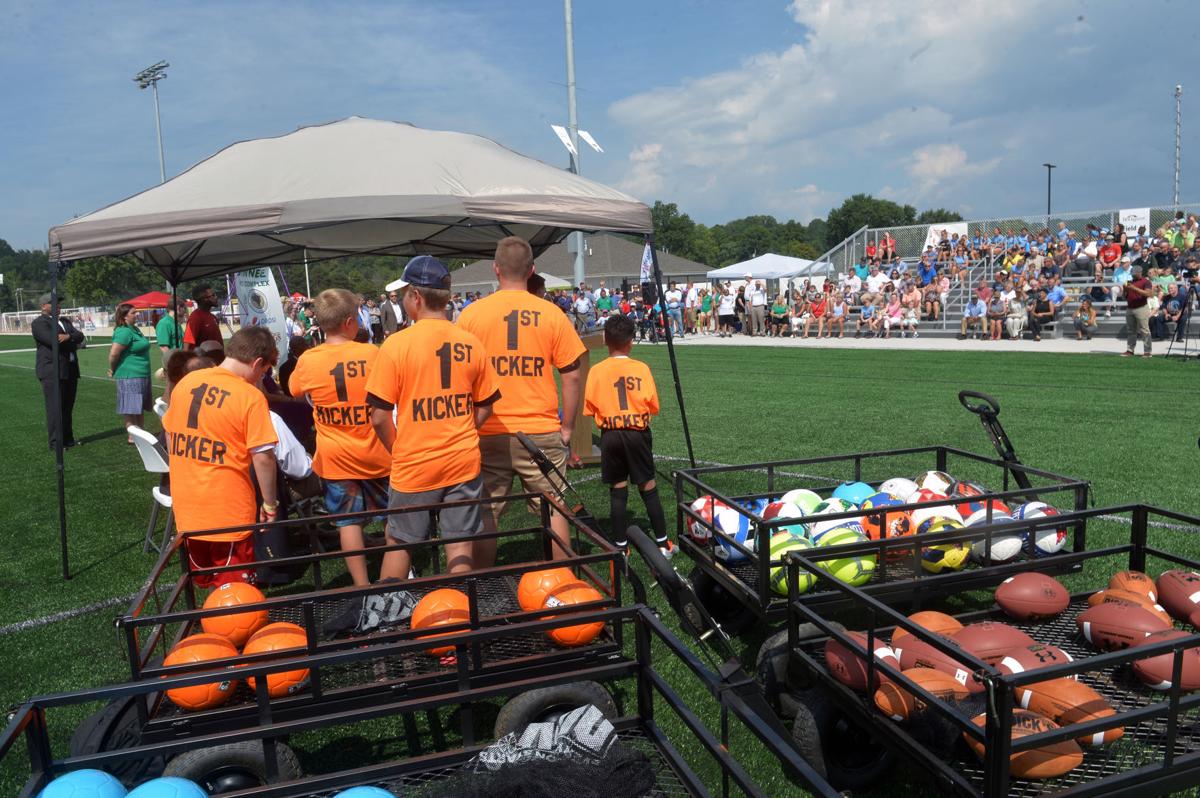 Soccer players joined in Tuesday during the Opening Ceremony for the Shawnee Sports Complex. The $17-million complex includes six collegiate-size turfed soccer/lacrosse/football fields with state-of-the-art lighting, along with an administrative building with office space, concessions and restrooms. 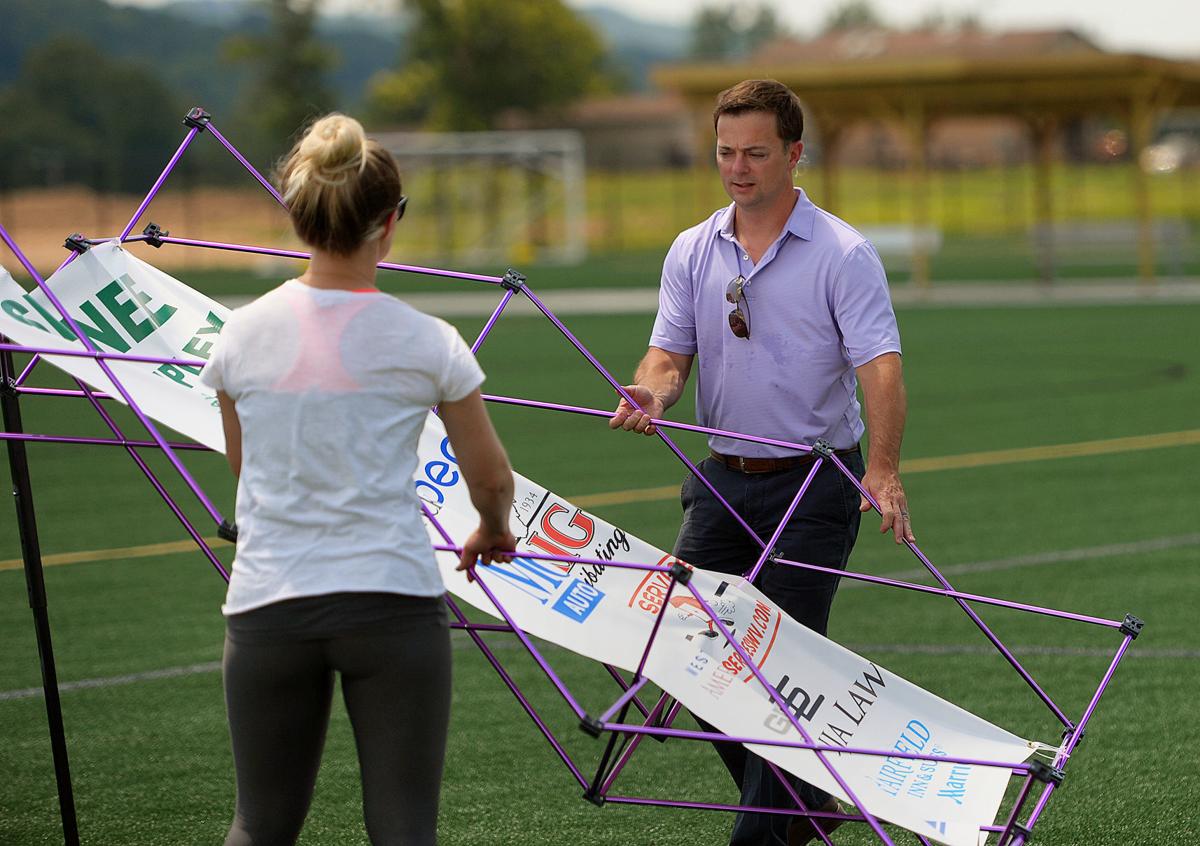 Youth soccer players take to the field Tuesday after the opening ceremony for the Shawnee Sports Complex. While the soccer, football and lacrosse fields are finished, four collegiate-size baseball and softball fields with turf infields and grass outfields still are under construction. Several grass practice fields will also be ready for use in the coming months.

Soccer players joined in Tuesday during the Opening Ceremony for the Shawnee Sports Complex. The $17-million complex includes six collegiate-size turfed soccer/lacrosse/football fields with state-of-the-art lighting, along with an administrative building with office space, concessions and restrooms.

As hundreds of young soccer and lacrosse players and their parents watched and waited on a shiny new set of bleachers for their chance to give the newly turfed fields at the Shawnee Sports Complex their first use, speakers at the complex’s dedication ceremony on Tuesday spoke of its importance.

“After months of preparation, public meetings and the tireless efforts of so many, I am thrilled to say that Kanawha County is now home to the premiere youth sports facility in West Virginia,” said Kanawha County Commissioner Ben Salango.

The $17 million complex, which opened less than 15 months after it was conceived, includes six collegiate-size turfed soccer/lacrosse/football fields with state-of-the-art lighting, along with an administrative building with office space, concessions and rest rooms.

Still under construction are four collegiate-size baseball and softball fields with turf infields and grass outfields, which will be ready for use next March. Several grass practice fields will also be ready for use in coming months.

Major upgrades to the Shawnee swimming pool, operated by the City of Dunbar, were paid for through the project, as was the rebuilding of several outdoor basketball courts adjacent to the pool.

The 137-acre site now occupied by the sports complex was, until last year, the Shawnee Park golf course.

“We consecrate today hallowed ground,” said Kanawha County Commission President Kent Carper. “Native Americans walked here long before any of us did. Later, it was owned by the first black property owner allowed to own land in this area, then it was used for a racetrack and a prison for children. Now it’s the home of new opportunities and a new beginning.”

So far, Hayslett Construction of Hurricane, the main contractor, has moved 60,000 cubic yards of dirt and rock to create the level surfaces needed for the complex’s athletic fields, said Salango, who has spent countless hours in meetings and site visits to help speed the completion date of the project.

“Youth sport travel is a growing, $15-billion-a-year business,” he said. “I thought it was time for Kanawha County to get into the game as soon as possible.”

A Charleston attorney, soccer dad and soccer and wrestling coach, Salango was appointed to the Kanawha County Commission in February 2017 to replace Dave Hardy, chosen by Gov. Jim Justice to head the state Department of Revenue. He wasted no time getting acquainted with the idea of developing a sports facility suitable for hosting regional, or even national, tournament play.

“An economic impact study had come out on the benefits of having a travel sports facility,” Salango said. “The day after I was appointed, I started sending out emails to see if a project like that would be viable here.”

In April of last year, a second study indicated that the Shawnee Park Golf Course was the best of six possible sites within the county for such a sports complex. Another study indicated that if the funds could be raised to build such a facility in Kanawha County, it would generate enough income to more than cover expenses, “which would let us set a little aside each year to replace the turf” and pay for other maintenance needs, Salango said.

Before Tuesday’s ceremony, Salango pointed out that the turf used at Shawnee was the same brand used by the Atlanta Falcons and the Atlanta United pro soccer team at their home statdiums.

“I think I know more about turf now than anyone should know,” he joked.

The new sports complex lies within a few hours drive of cities like Lexington, Columbus, Cleveland, Cincinnati, Charlotte and Pittsburgh, making it a feasible locale for travel teams to drive to for tournament competition.

Among those on hand for Tuesday’s opening ceremony was Marc Boldurian, director of the Pro Football Hall of Fame’s national championship tourney for youth teams. A state tournament scheduled for the Shawnee Sports Complex this November for Midget League youth football teams under the auspices of the Pro Football Hall of Fame will determine which team will represent West Virginia at a regional tourney in Richmond, he said. The winner of that tourney will travel to Canton, Ohio, for the national championship.

Another major tournament booked for November is the Friends of Coal Cup for soccer teams across the state. From July 16 to 20, Marshall University’s men’s soccer team will host a World Cup Day Camp at the complex, and T.R. Dues will hold a football training camp on July 21 from 9 a.m. to 1 p.m.

Next year, the complex will co-host, with Barboursville, the U.S. Youth Soccer Eastern Championship tournament, and the following year, the Eastern Presidents Cup, drawing hundreds of teams from across the east to Institute.

Together, those tournaments are expected to have a $32 million impact on Kanawha Valley hotels, restaurants and other amenities.

Following Tuesday’s dedication ceremony, the West Virginia Chaos soccer team played its final game of the season on one of the new fields, with Landau Eugene Murphy Jr. scheduled to sing the national anthem. Following that game, a fireworks display was to take place.

“We set out to build a sports facility that we could all be proud of, and we did so in a transparent and responsible way,” said Carper. “The Shawnee Sports Complex is going to be a huge success for all of Kanawha County.”