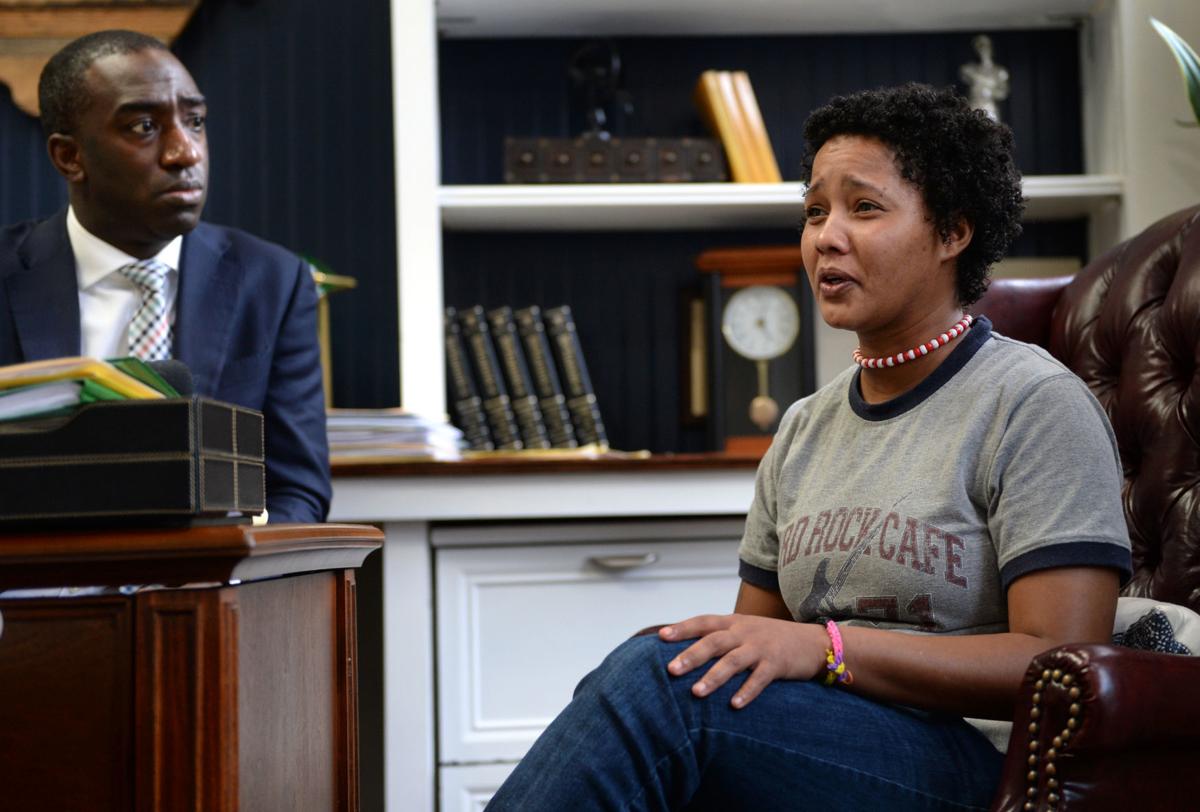 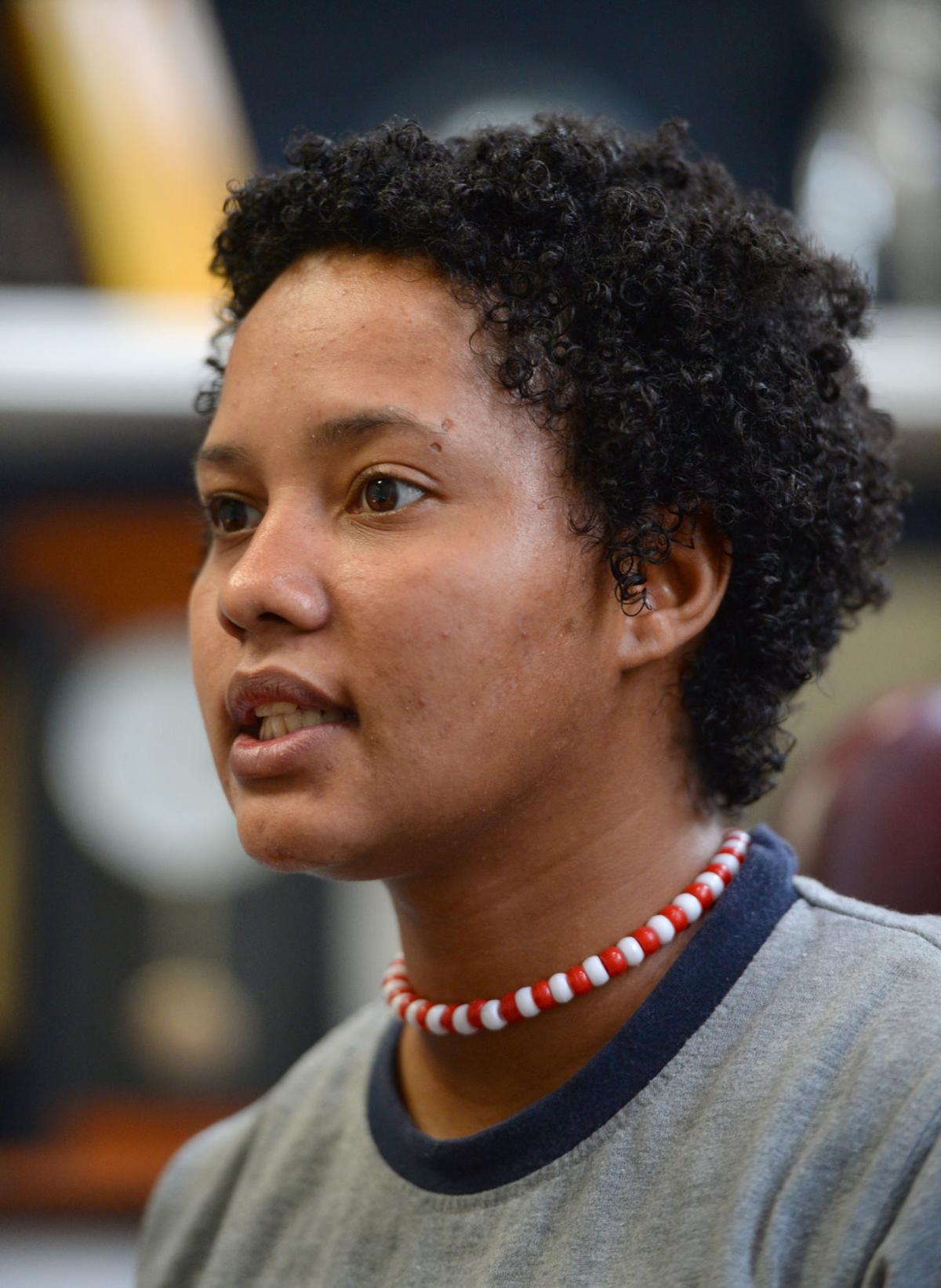 In October, Freda Gilmore lay nearly restrained on the ground outside  the Family Dollar on Charleston’s West Side. Charleston Police Officer Carlie McCoy straddled Gilmore’s back. One of Gilmore's hands was handcuffed, and as McCoy attempted to wrangle the other one, Officer Joshua Mena arrived on the scene.

A released dashcam video shows Mena — in a span of less than 10 seconds — leaving his vehicle, charging to McCoy and Gilmore and kneeing Gilmore in the head before punching her with a closed fist four times in the skull.

The incident rattled Charleston after cellphone video of the incident began circulating on social media, sparking community conversations as residents questioned the culture of the city’s law enforcement and how to stop anything similar from happening again.

Now for the first time, Gilmore is ready to speak about the incident.

“Today, now, I’m afraid for my life to call the police. If I was in danger, I wouldn’t call them,” Gilmore said. “I could have lost my life. I’m afraid walking down the street. I don’t feel — I’m not safe.”

Gilmore has spent the last three months at River Park Hospital, in Huntington. There, she decompressed from the brutal arrest that she said left her with a broken jaw, an injured back, a black eye and what she believes are two unfounded misdemeanor charges.

“I shouldn’t have been arrested in the first place,” Gilmore said. “I wasn’t breaking the law, I wasn’t resisting arrest and I didn’t have anything to get arrested for.”

She said she was walking by the Family Dollar around 10 p.m. on Oct. 14 when a woman on the side of the building, who she believed to be intoxicated, began provoking her to fight. Someone, who has not been identified, called the police in response to the potential altercation

Gilmore didn’t fight, though. Instead, she said she was scared.

“I was being the adult, I was walking away, I didn’t want a part of that,” she said.

When the police arrived, “it all happened too quick,” according to Gilmore.

She doesn’t remember a lot of their initial arrival. Per a criminal complaint filed by McCoy, Gilmore did not listen to commands and would not remove her hands from her pocket. She tried to walk “backward away from” McCoy.

According to a lawsuit filed by Gilmore against the city, the officers and Family Dollar, she didn’t respond due to “special needs.”

That, the lawsuit reads, is when McCoy went to tackled Gilmore, “without justification,” to restrain her.

Gilmore said all she remembers is lying on her stomach with McCoy on top of her.

Neither the cellphone video of the incident or Mena’s dashcam footage documented this part of the encounter. Both start later, as Mena arrives on the scene.

As the case has gained more and more attention, Gilmore said the persisting rhetoric that she is mentally incapable is one of the more difficult things for her to cope with.

In her lawsuit, filed by Charleston attorney Michael Cary, it’s stated that Gilmore did not follow McCoy’s initial commands due to “special needs.”

Gilmore said she was evaluated by a doctor at River Park, who found she was wholly capable, mentally and physically, of leading an independent life. She doesn’t see herself as mentally disabled.

And either way, she said, the officers who responded shouldn’t have treated her, or anyone, like that.

Gilmore, who is black, believes her race was at least partially the reason for the responding officers’ behavior toward her. There wasn’t a fight happening when they arrived at the scene, and instead of attempting to talk to her, Gilmore said she felt they saw her as a threat immediately.

“Right away they acted like I had a weapon, like I was doing something wrong or was threatening,” Gilmore said. “I don’t think that would happen to someone else, I do believe it had to do something with my race.”

After being detained by McCoy and Mena, Gilmore was charged with two misdemeanors: obstructing an officer (for not following McCoy’s commands) and animal cruelty.

As McCoy wrote in her criminal complaint, Gilmore was holding a small puppy in her front pocket. It died from parvo, a highly contagious virus common among young dogs. McCoy noted that while Gilmore did not intentionally kill the dog, she didn’t have the “necessary supplies” to take care of it.

Gilmore said that’s because it wasn’t her dog. She found it while she was walking, and was hoping to try and find some help for it, not knowing if it was dead at the time. She didn’t have the chance, though, as the incident occurred at Family Dollar occurred soon after.

“I just wanted to help it, I wasn’t trying to hurt it, not at all,” Gilmore said.

Gilmore spent four days in South Central Regional Jail for the misdemeanors. After she was arrested, she was bleeding heavily down her face from where Mena kneed her.

She said her head was throbbing from both he and McCoy’s strikes. Her jaw, previously injured, ached. She requested to go to the hospital but the officers refused.

According to CPD’s use of force policy, “immediate steps will be taken” if an officer’s use of force results in injury. That policy was not followed by anyone at the scene.

Today, Gilmore said she’s reminded of the violent arrest every day. A doctor at River Park prescribed her lidocaine patches to numb the ongoing pain she suffers in her back, where McCoy straddled her.

The patches are about the size of an adult hand, and cover the entirety of her lower back. She puts one on every morning.

“I’m still hurting, so no, I’m not going to forget any time soon,” Gilmore said. “I’m traumatized, I severely am. … I don’t even go outside because I feel afraid.”

While Gilmore healed at River Park, the Charleston community questioned the city law enforcement’s culture and what, if anything, needed to be fixed to ensure this did not happen again.

A bystander — who was also arrested that night — recorded Gilmore’s arrest and the alleged brutality at the hands of Mena and McCoy. After public outcry, CPD opened an internal investigation into the officers’ conduct. Per Police Chief Opie Smith II the actions reported by Gilmore and shown on camera did not violate the department’s use of force policy, and the two officers returned to work after a brief period of paid leave.

That use of policy was last updated in 2003. It’s a 14-page policy mostly based on a “continuum of force” that ranges from verbal commands to deadly force. According to the policy, McCoy and Mena acted at level two and level three of the five-level scale.

Lt. Autumn Davis, CPD’s public information officer, said the policy is still under review, as it has been for the last two months. Charleston City Attorney Kevin Baker, who provided the policy in an email, confirmed Davis’ statement.

The policy went under review in October, when Mayor Amy Goodwin said she respected CPD’s response, but if Mena and McCoy’s actions were in line with policy, then that policy needed to be revisited. In November, Smith passed all information regarding Mena and McCoy’s conduct to the FBI for further review. That’s still ongoing.

Gilmore hopes to see change come from what happened to her. She wants the officers to be held accountable. She also said she would like a formal apology from city leaders. Since the arrest, she feels like she’s been regarded as less of a citizen than others around her, despite growing up here.

Baker said that, since a lawsuit has been filed against the city, any communication to Gilmore would have to go through Cary, her lawyer. According to Baker, it would be improper and unethical for anyone with the city to contact Gilmore.

Still, Gilmore said, she’d like for the pain she went through to be acknowledged by city leaders, not just the community, which she appreciates greatly.

“I didn’t know so many people cared about me until they spoke up,” she said. “I want to thank them a lot.”

Gilmore said she knows she’s not the only person who has suffered at the hands of the police.

“If there are other people out there who know who I am because of this, who have gone through something the same, I want them to stay strong and keep going,” Gilmore said. “I’m OK now, I’m safe, and I hope things change around here. They have to.”