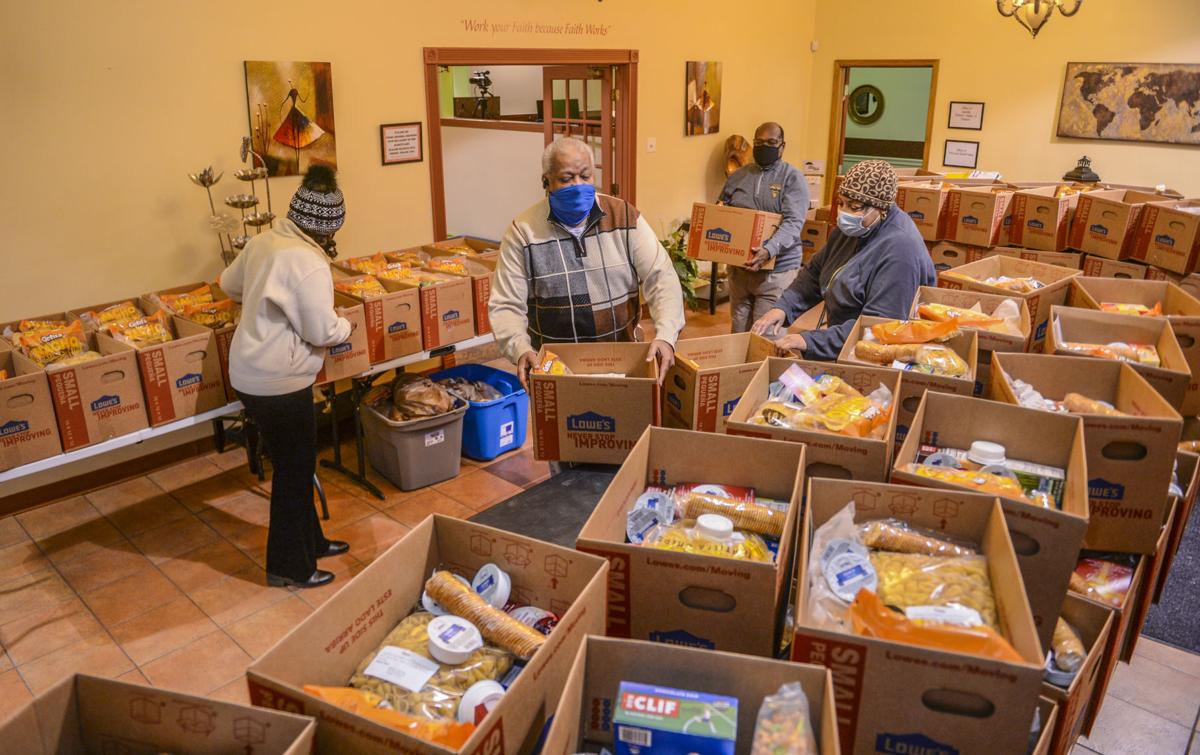 Bishop Robert Haley (center) and congregation members help stack over 400 boxes in the entryway of A More Excellent Way Life Center Church on the West Side after the Family Dollar burned down in February. 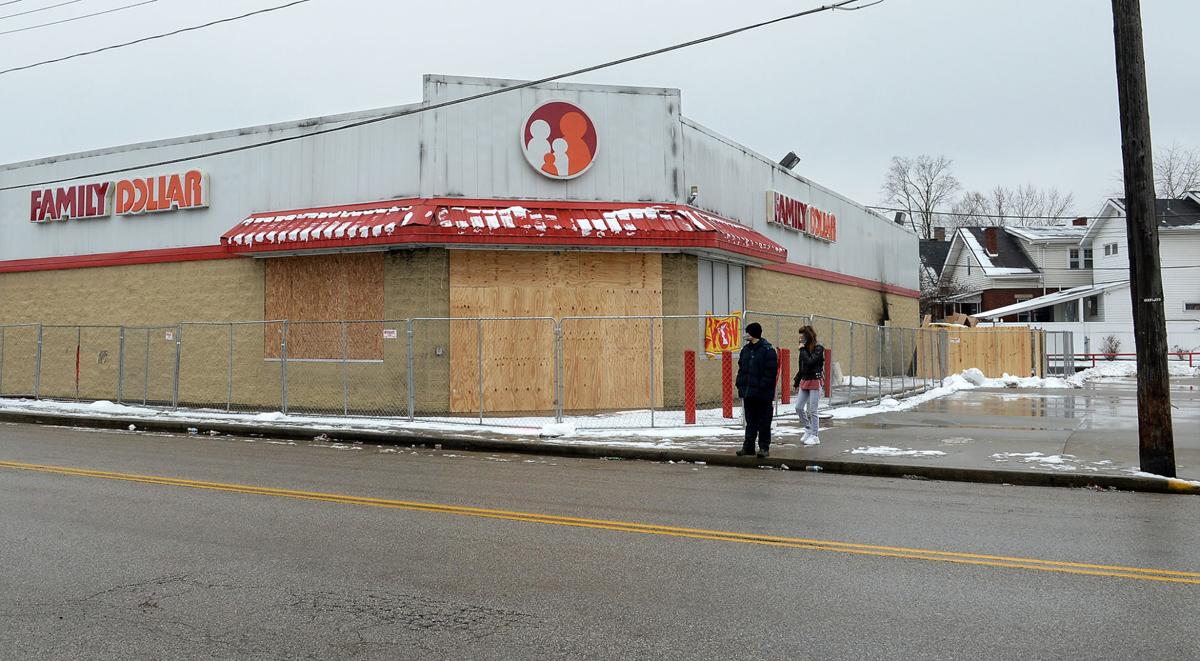 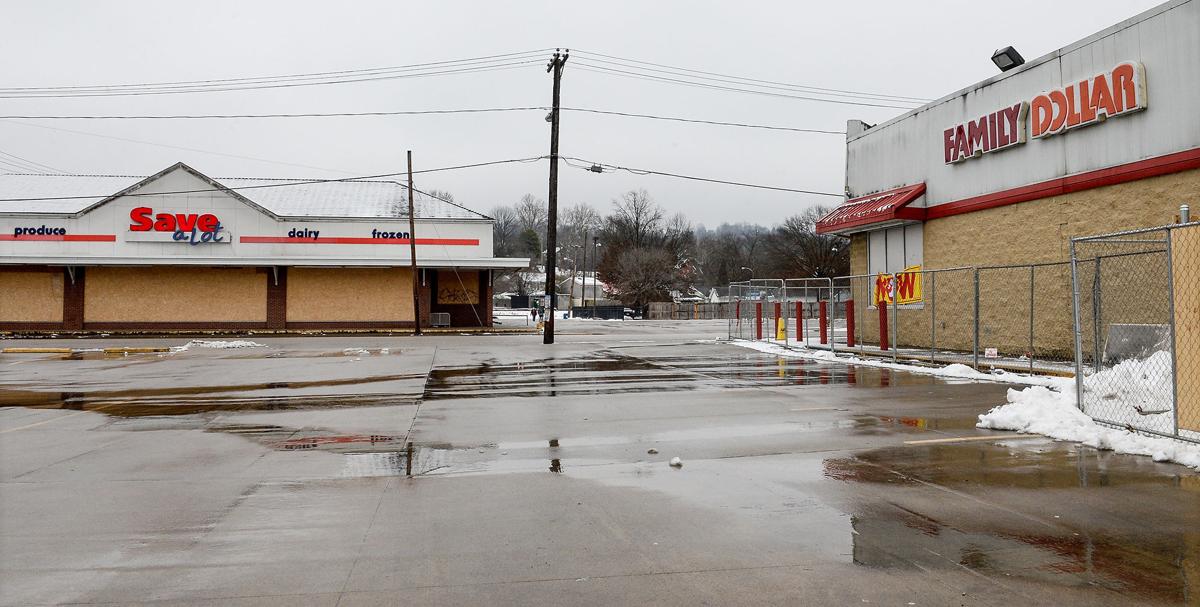 The boarded-up Family Dollar Store (right) is across the street from the already-boarded-up Save A Lot grocery store.

Bishop Robert Haley (center) and congregation members help stack over 400 boxes in the entryway of A More Excellent Way Life Center Church on the West Side after the Family Dollar burned down in February.

The boarded-up Family Dollar Store (right) is across the street from the already-boarded-up Save A Lot grocery store.

Set across the street from a shuttered Save A Lot grocery store, the charred remains of Family Dollar on Charleston’s West Side stand in grim testament to a growing problem.

“When they brought food into that Family Dollar, it was a blessing for this community,” said Charleston City Councilwoman Deanna McKinney, who represents the city ward where the store burned Feb. 8. “Think of all those families, old people and grandparents who don’t have a car, who can’t drive, who are going without right now in the middle of winter storms. What do they do?”

The U.S. Department of Agriculture defines people as “food insecure” when they lack consistent access to enough food — especially fresh food — to support a healthy lifestyle. Some 37 million Americans and nearly 300,000 West Virginians were classified as food insecure in 2018. Thousands more were living “one bad month” away from the designation, according to Feeding America, a national nonprofit organization focused on closing the hunger gap.

Those numbers are bound to increase as a result of the coronavirus pandemic.

On the West Side, a mid-sized Kroger is the lone grocery store where produce and healthier foods can be purchased. The options there are limited compared to those offered at larger Kroger stores or the Piggly Wiggly elsewhere in Charleston.

“This, unfortunately, is the norm as food systems are laid out in grids linked to income,” said Joshua Lohnes, the director of the Food Justice Lab at West Virginia University. “What we see in lower income areas is less access to fully stocked stores as corporate entities choose not to site there, and of the stores that are there, the offerings are less.”

In Kanawha County, 14% of residents are classified as food insecure, according to Feeding America, a slight drop from 15% in 2016.

The West Side isn’t the only area affected. In eastern Kanawha County, where dollar stores have sprouted every few miles offering higher-priced and lower-quality food products, food insecurity has deepened.

Charleston’s East End lacks a grocery store or fresh produce vendor. Kanawha City and South Charleston offer grocery stores and supermarkets but can be inaccessible for people without cars.

“It’s one of those things [where people say], ‘Oh it’s on the bus line,’” said Charleston City Councilwoman Tiffany Wesley Plear, who also represents the West Side. “Have you caught the bus with three kids? I’ve done it, and it’s a feat — three kids and groceries.”

He said his church is working to help tenants at two senior high-rise apartment buildings near the site of the burned store.

“We’re just trying to find basic needs so that these people don’t have to walk all the way over to Kroger, or all the way — I don’t even know where the next store is,” Haley said.

The timing is particularly poor, he said.

A More Excellent Way is carting basic supplies such as mouthwash, toothpaste, toothbrushes, deodorant, razors and shaving cream to the high rises, Haley said. The church also is gathering women’s hygiene products along with diapers and wipes for parents in the neighborhood.

This work is separate from the 250 to 300 food boxes the church distributes monthly. What’s left over this month will go to the high rises, Haley said.

Food insecurity on the West Side is coupled with a near-complete absence of fruits and vegetables, an issue no matter the time of year, Haley said. Sometimes, the heat, rather than the cold, is a deterrent for older people to get healthy foods.

“Even in the summer months, it’s a challenge for them to get over [to the store]. Now, with the storms that we’ve had, I mean back-to-back-to-back-to-back — cold weather and temperatures have just been crazy, it really disables our seniors,” he said.

Then there is the specter of COVID-19.

‘We don’t have the help we need here’

While there is a direct relationship between poverty and food access, the current situation on the West Side — a Black community — highlights how these issues are tied to race, said Angi Kerns, community coordinator and outreach liaison for A More Excellent Way.

“Racial dynamics in the food system go very far back, to plantation economies where Black bodies were devalued and have continued to the present day,” Lohnes said. “Throughout the country we see these dynamics unfolding in cities like [the West Side] where racial minorities have less access to food because of corporate decisions, and sometimes nonexistent support networks on the ground.”

In communities with chronic food insecurity, many people, including children, go hungry for long periods. This cycle often makes it difficult for people to focus on anything but hunger as they also face health complications through undernourishment or malnutrition.

“One of the biggest costs of hunger is you can’t afford to dream,” Kerns said. “If a kid is wondering where their next meal is coming from, they’re not thinking about their future. That kid is not thinking, ‘I could be president one day.’”

Frequently, the focus is on temporary solutions, such as food distribution through pantries and banks.

The loss of Family Dollar shined a light for some on vast, intersectional issues in the community, including the need for resources for people such as Latasia Badger, the 20-year-old woman charged with setting fire to the store.

“They can rebuild a Family Dollar,” McKinney said, “but no one can rebuild that girl for what she has to face now.”

‘We need to face the root of these issues’

The battle against food insecurity reminds Kerns of the West Virginia Mine Wars, during which miners fought corporate oppression.

“We have to realize in West Virginia that things really have not changed all that much, and it is still the people of West Virginia being exploited by corporations who don’t give a s**t about us,” Kerns said. “That is what it’s going to take to turn this situation around.”

In recent years, child hunger has become a focal point. The teachers’ strikes in 2018 and 2019 and the pandemic showed how many children rely on schools for meals they don’t get at home.

Lohnes called for an emphasis on permanent solutions.

“As long as we keep putting this energy and investments into Band-Aids, we’re not going to see change,” Kerns said. “The issues at hand spawn from systemic racism, housing inequality, mental health issues, criminal justice reform ... we need to face the root of these issues before we’ll make progress.”

Returning to School with a Smile: Tips & Tricks

They Saved A Baby’s Life—Here’s How You Could, Too