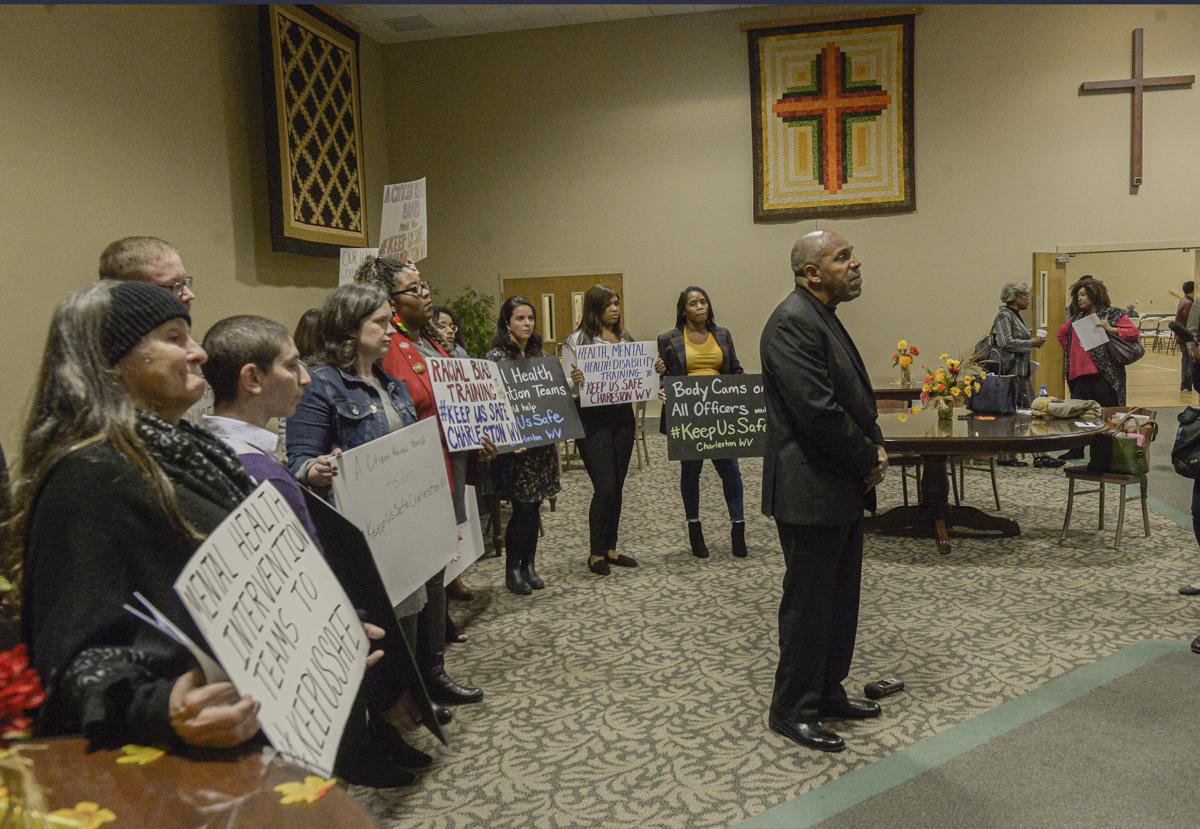 West Virginia NAACP President Owens Brown speaks at Tuesday evening’s community forum on police use of force at Emmanuel Baptist Church, on Charleston’s West Side. The goal of the forum was to allow residents to offer feedback to police after a use-of-force incident and for police to share their experiences. 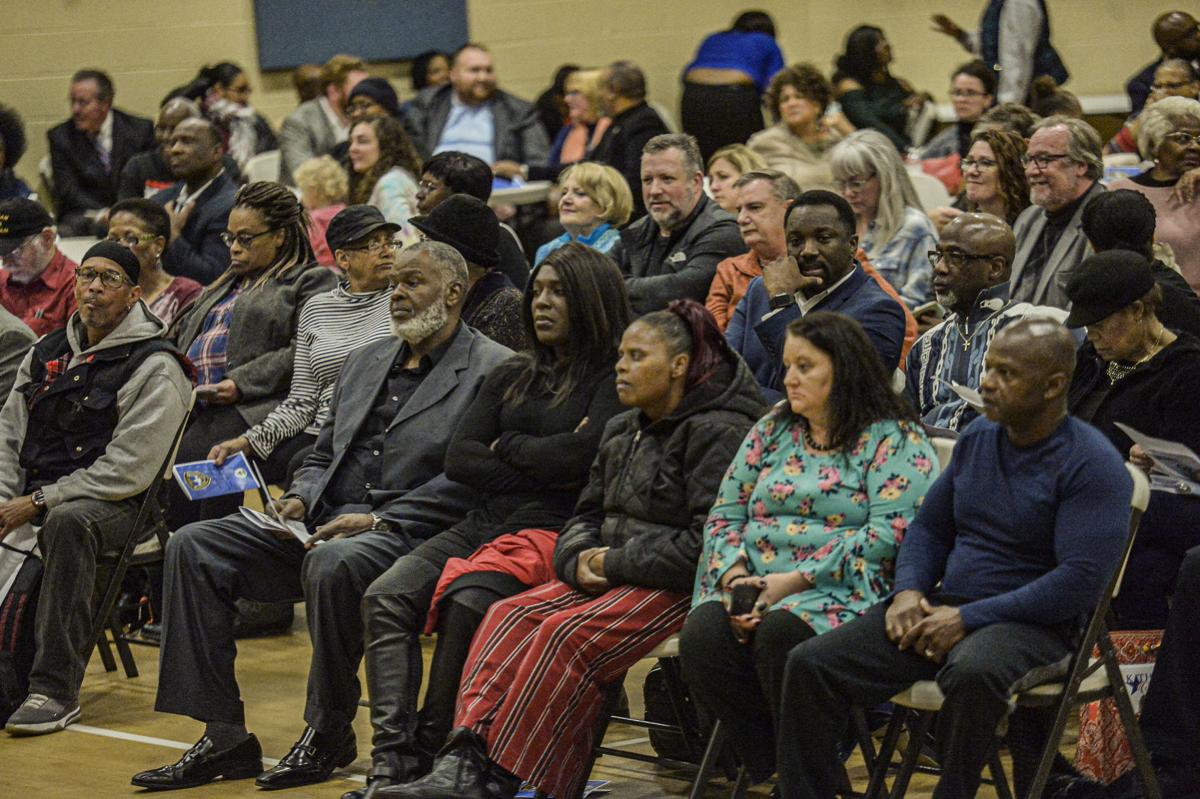 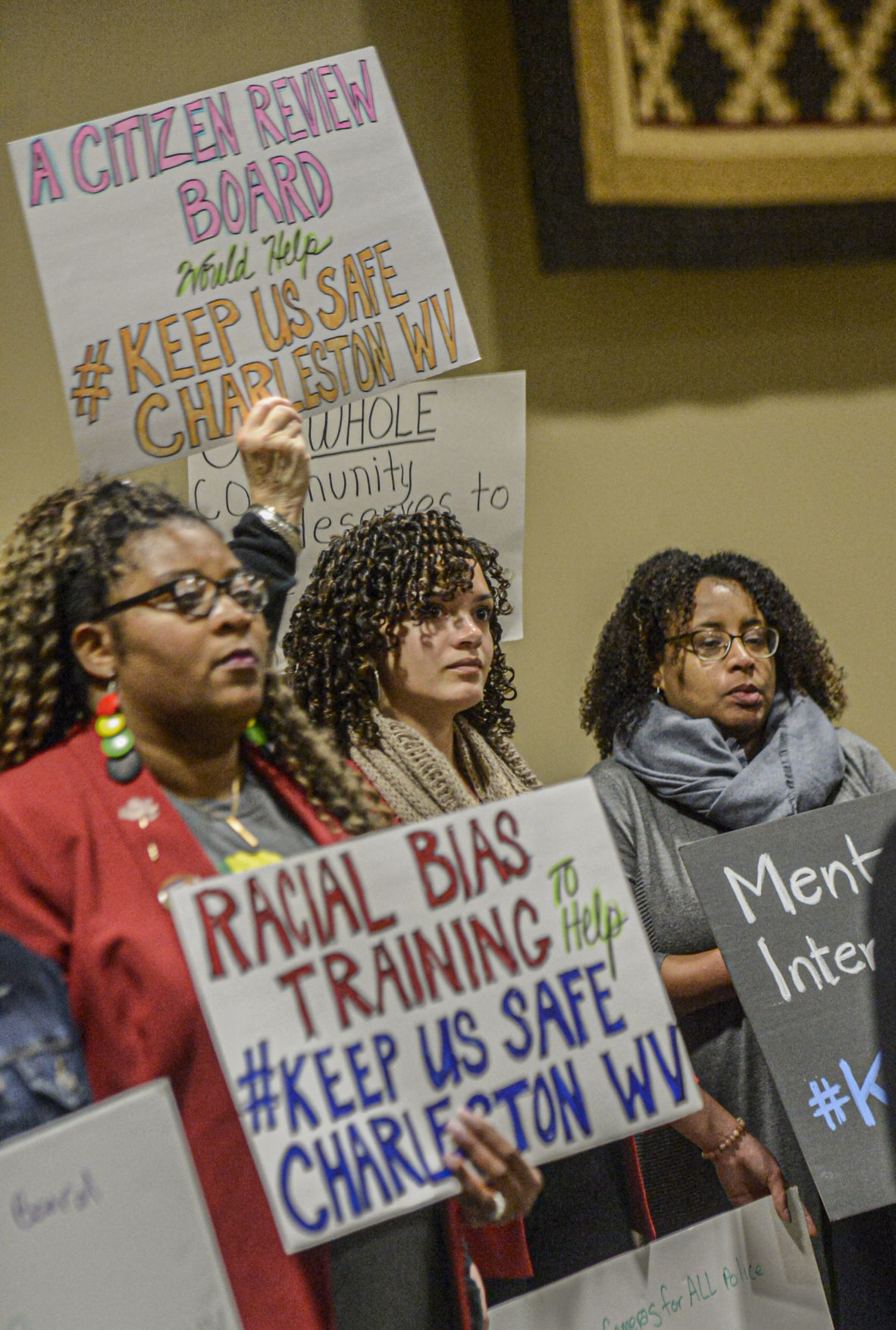 These residents made signs for Tuesday’s forum.

West Virginia NAACP President Owens Brown speaks at Tuesday evening’s community forum on police use of force at Emmanuel Baptist Church, on Charleston’s West Side. The goal of the forum was to allow residents to offer feedback to police after a use-of-force incident and for police to share their experiences.

These residents made signs for Tuesday’s forum.

Her family has said Gilmore, 27, has special needs.

Police Chief Opie Smith said the officers’ actions were OK under the department’s use of force policy.

Following an internal review in the police department, the pair were cleared of any wrongdoing and permitted to return to work.

Nearly 30 clergy men and women delivered their request for an external investigation Tuesday evening at a public meeting billed as a chance for the community to discuss the police policy on “situations where active resistance is occurring.”

The Charleston-sponsored meeting, held at Emmanuel Baptist Church on Charleston’s West Side, was attended by nearly 200 people.

Goodwin joined Smith and three other officers in front of the crowd as clergy, community leaders and citizens demanded a policy change.

“It’s wrong that there was no outside investigation done in order to take away all appearance of impropriety,” Rev. Lloyd Allan Hill said, turning to face Goodwin. Hill spoke on behalf of RESET, a group of Charleston clergy and community advocates who serve as liaison to CPD.

“It is wrong to reference and lean on a policy to justify an abusive situation,” Hill added.

Goodwin released a statement via Facebook in support of Smith’s decision to allow Mena and McCoy to return to work but noted that the policy needed to be updated “to reflect our community values.”

She told the crowd Tuesday that the actions used by the officers were “too much.”

Clergy also asked that the officers return to administrative leave if an outside review was initiated.

Goodwin told the crowd she would respond to the requests in 10 days.

The police chief declined to comment to the clergy’s requests.

Gilmore’s father, Richard, and stepmother, Kim, attended the meeting and publicly thanked the community for their support.

The pair have said they intend to sue the city over the incident.

Police chief: “I don’t have time to review every policy”

Smith said Tuesday, when asked if he believed the officers did anything wrong, that he would “not have done it that way.”

However, he maintained that the current policy exonerates them.

When a community member demanded to see a copy of the policy, Smith responded, “I don’t have time to review every policy.”

Police said the officers were responding to a report of a fight between two women Oct. 14 on Virginia Street West.

A cellphone video taken by a bystander shows Gilmore lying on the ground as McCoy attempts to handcuff her.

That is when a second officer, identified as Mena, runs to where Gilmore and McCoy are, drops to his knees and punches Gilmore in the head multiple times.

Kevin Baker, Charleston city attorney, said Tuesday the department’s use of force policy is a 30-page document that was implemented in the 1980s.

Ricardo Martin, president of the local chapter of the NAACP, said, “If there is a policy or training video that you can hold up that particular incident in the way it was handled and say, ‘That policy exonerates the behavior,’ we are in trouble.”

Goodwin and Smith said they are looking at policies from throughout the country to determine what works in other cities before implementing new policy in Charleston.

The pamphlet did not include information on the use of force in arrests.

Prior to the community meeting, representatives from local and statewide nonprofits held a news conference asking CPD to adopt a list of policing reforms.

Representatives from the groups, including West Virginia Healthy Kids and Families coalition, Rise Up WV, asked that CPD review its use of force policy, create a citizen review board to review police activity and equip officers with functioning body cameras at all times.

“We will be watching and there will be a timeline,” Delegate Danielle Walker, D-Monongalia, said during the news conference. “Our government has checks and balances, and the time is now that our police have the same thing.”

Goodwin said in Facebook post last week that she was “committed to finding funding to provide more body cameras for our officers.”

Neither Smith nor Goodwin addressed body cameras during the community meeting.

Amelia Ferrell Knisely is a corps member with Report for America, an initiative of The GroundTruth Project. Reach her at amelia.knisely@wvgazettemail.com, 304-348-4886 or follow @ameliaknisely on Twitter.