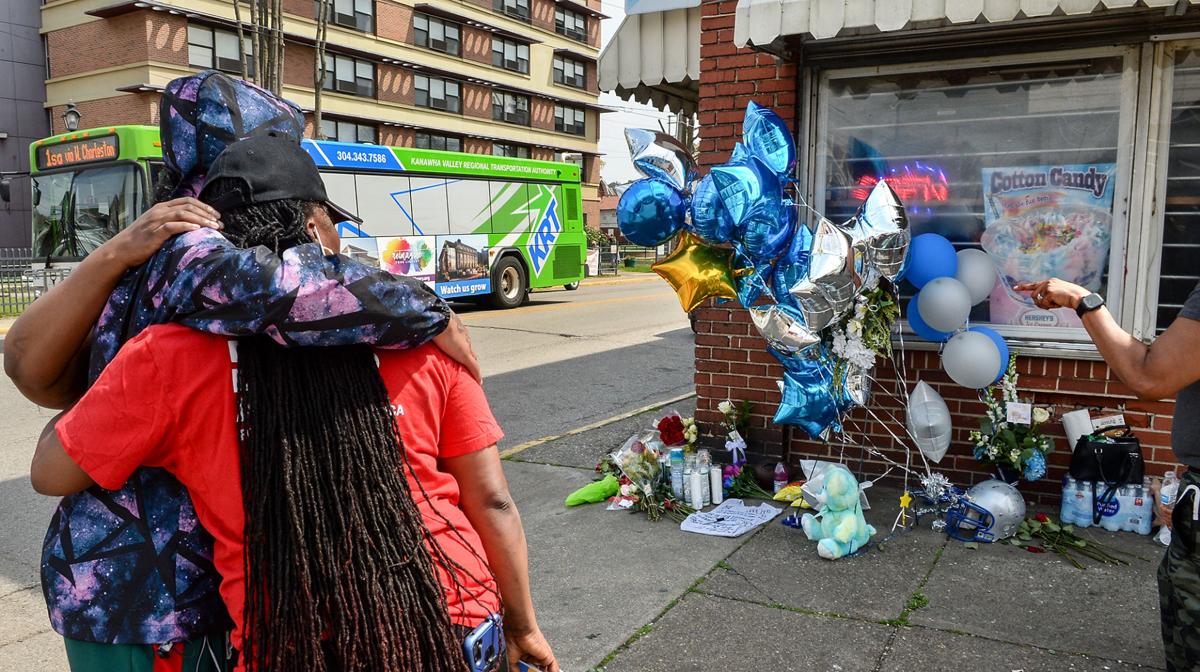 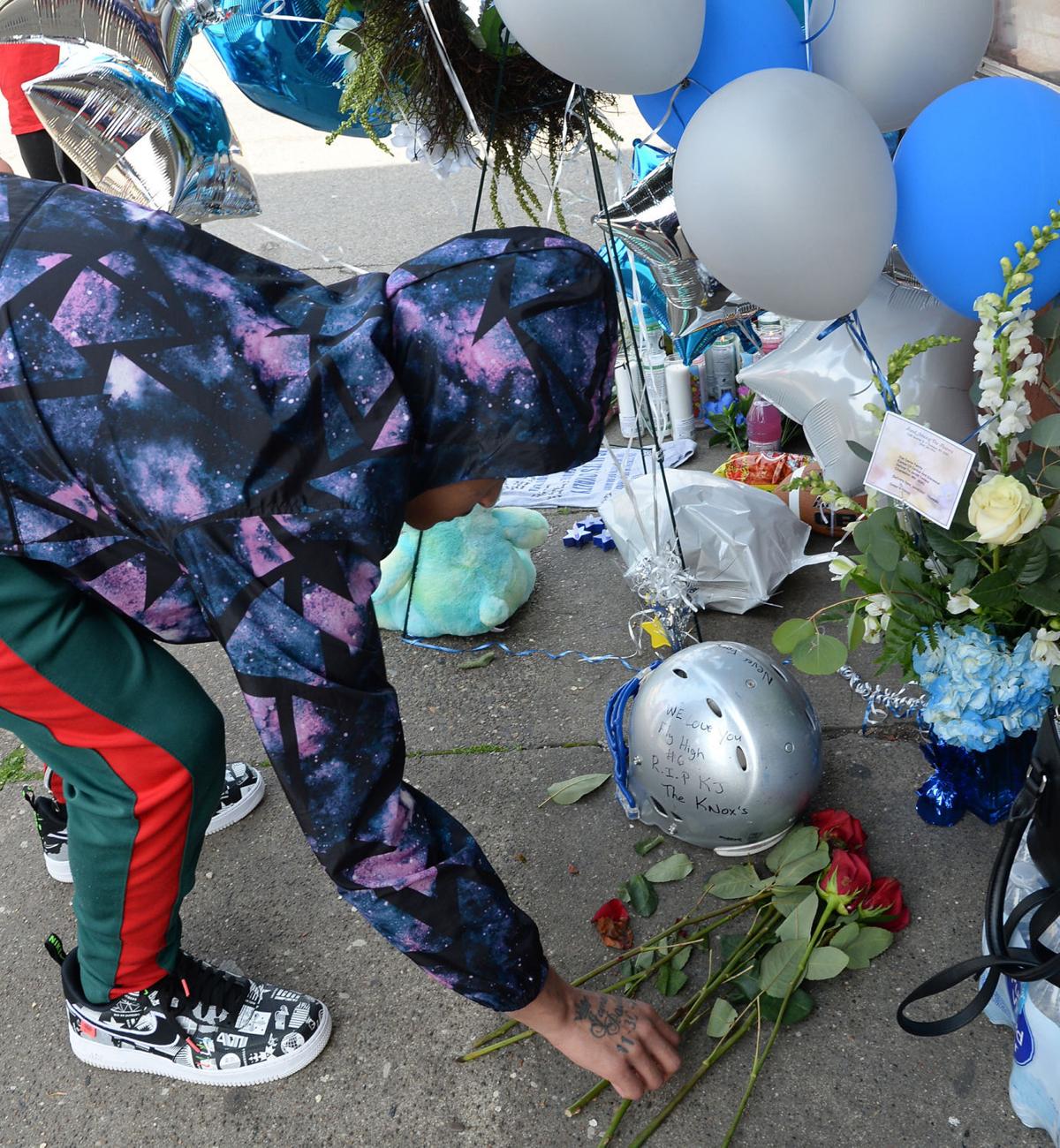 Capital High School student Omar Hanbrick places roses next to a football helmet Thursday at the memorial for classmate Kelvin “KJ” Taylor. Taylor was shot and killed at the site on the corner of Central Avenue and Glenwood Avenue Wednesday night. 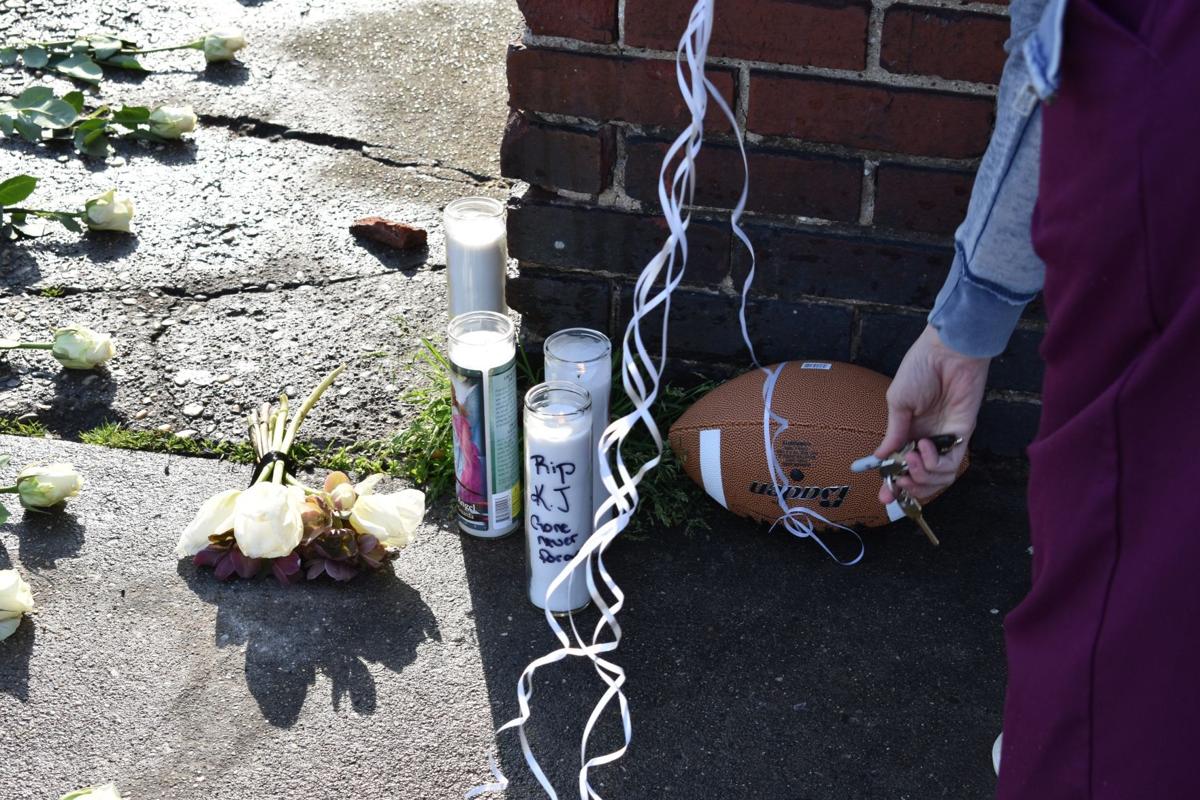 A memorial to Capital High student Kelvin “KJ” Taylor was set up on Central Avenue Thursday morning. Taylor was shot there Wednesday night and later died of his wounds. 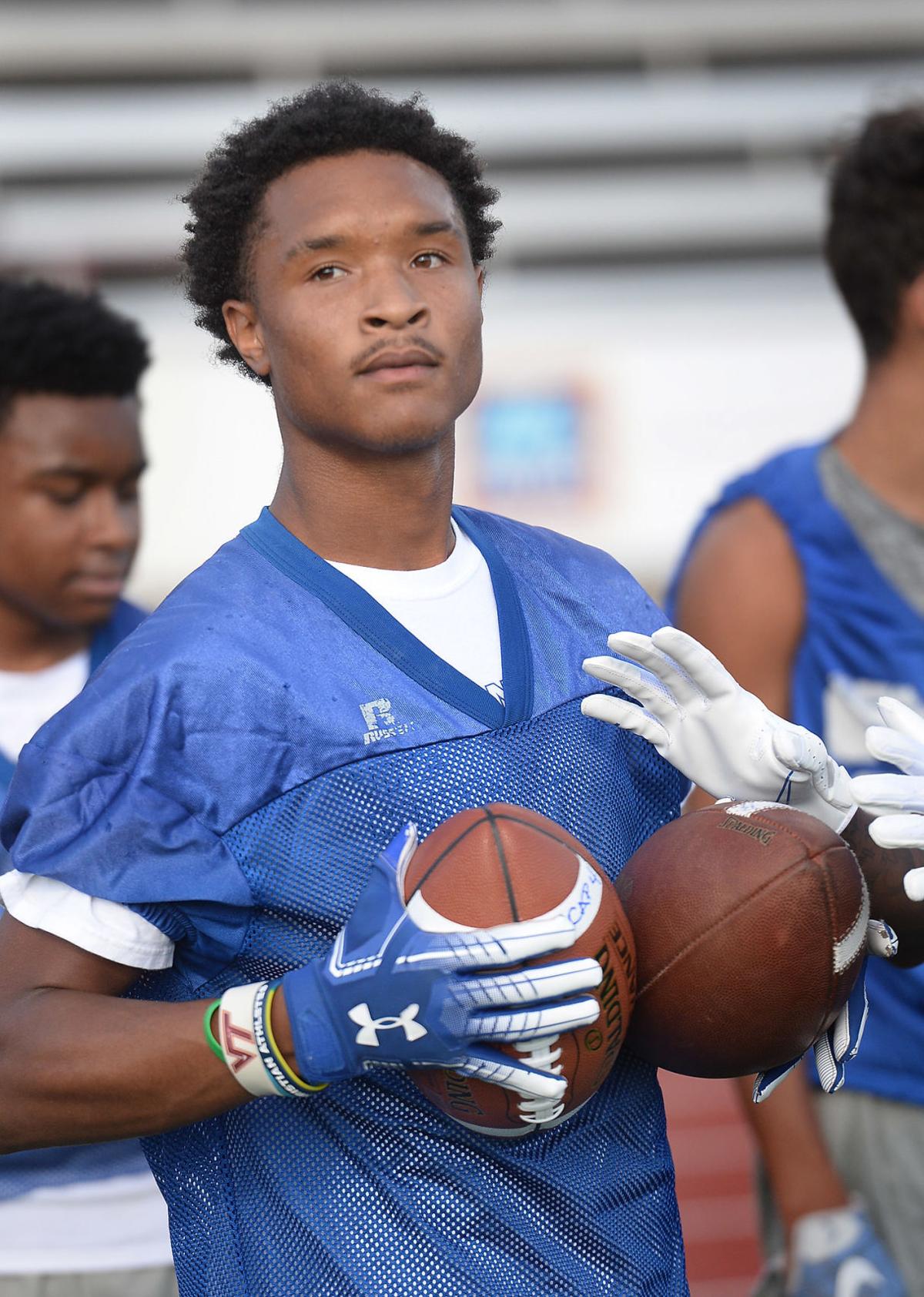 KJ Taylor is seen during a Capital High football practice in August 2020. Taylor was shot to death on Charleston’s West Side Wednesday, April 7.

Update: Vigil to be held for KJ Taylor Friday evening

A Capital High School student-athlete was shot and killed on Charleston’s West Side Wednesday night.

Charleston Police Chief Tyke Hunt said Thursday morning Kelvin “KJ” Taylor, 18, did not survive wounds suffered as a result of the shooting that happened around 8:15 p.m. Wednesday on the corner of Central Avenue and Glenwood Avenue.

City police officers witnessed people running from the area at the time of the shooting, and officers were on scene rendering aid before a dispatch call went out, Hunt said, but Taylor died in the hospital hours later.

Hunt asked the community to support Taylor’s family during this time, and said an investigation is underway. The community should expect an increased police presence on the West Side, he said, as officers will be asking questions and trying to gather information.

Hunt did not give any details on possible suspects. He said the investigation is the department’s top priority.

“I didn’t know KJ, but I do know he was never in trouble, a good kid, focused hard on his athletics and was really excelling in that” Hunt said. “So, for this bright star to be taken from us, [it] really impacts the police department, and this investigation is priority No. 1.”

“Our city, our community is hurting over the senseless, senseless act of violence and the death of Kelvin ‘KJ’ Taylor,” Mayor Amy Shuler Goodwin said Thursday. “We will do everything in our power to find who took the life of this young man — a bright, wonderful young man.”

Martec Washington, a West Side resident, said he was on the scene after the shooting Wednesday night and came back around 7:30 a.m. Thursday. He said he called the city street department to hose Taylor’s blood off the sidewalk so he could place a memorial where he was killed.

Amanda Jones, who works in the neighborhood but lives in Campbells Creek, said her son played football at Riverside High School. She said he remembers Taylor as “one of the stars” when Capital and Riverside faced off.

At about 9 a.m. Thursday, Jones said she was heartbroken for the school children who were standing at the bus stop on the corner hours earlier.

“These kids that had to catch the bus here this morning were standing on this kid’s blood that they look up to,” she said. “That’s sad.”

Shanita Robertson, who paid her respects at the memorial, said her 15-year-old son often hangs out around the area. The corner where Taylor was killed is right in front of Sali’s Market and Deli, which had a bullet hole in the front glass.

“My son said he couldn’t even sleep last night,” Robertson said. “He hangs over in this area sometimes, too, and yesterday was one of them days he was not over in this area. It could have been anyone’s son in front of this store.”

Terrencesa Shanklin, who came to the scene at the same time as Robertson, said she is heartbroken for Taylor’s mother, who she knows personally.

Sherri Gollihue’s son, Brock, was in the same grade and played football with Taylor, she said while placing a Capital Football T-shirt on the corner. She said Taylor had a lot of best friends, and Brock was one of them.

“If my son wasn’t at work, he’d probably be driving [Taylor] around — I mean they were best friends,” Gollihue said. “It’s horrible. It’s scary. I don’t know what to say. This shouldn’t happen.”

Jones, through tears, thought about the countless young people who continue to be victims of gun violence.

Washington said the work must be put in to end this violence. Everyone in Charleston — not just the West Side, or the mayor, or parents or the police force — everyone, he said, must hold themselves accountable.

“When I got here this morning, my heart was still broken. My community was broken, and I’m not sure how we’re going to heal unless we’re honest and we hold ourselves accountable,” he said. “If we don’t do that, there’s going to be another KJ. There’s going to be several more KJs.”