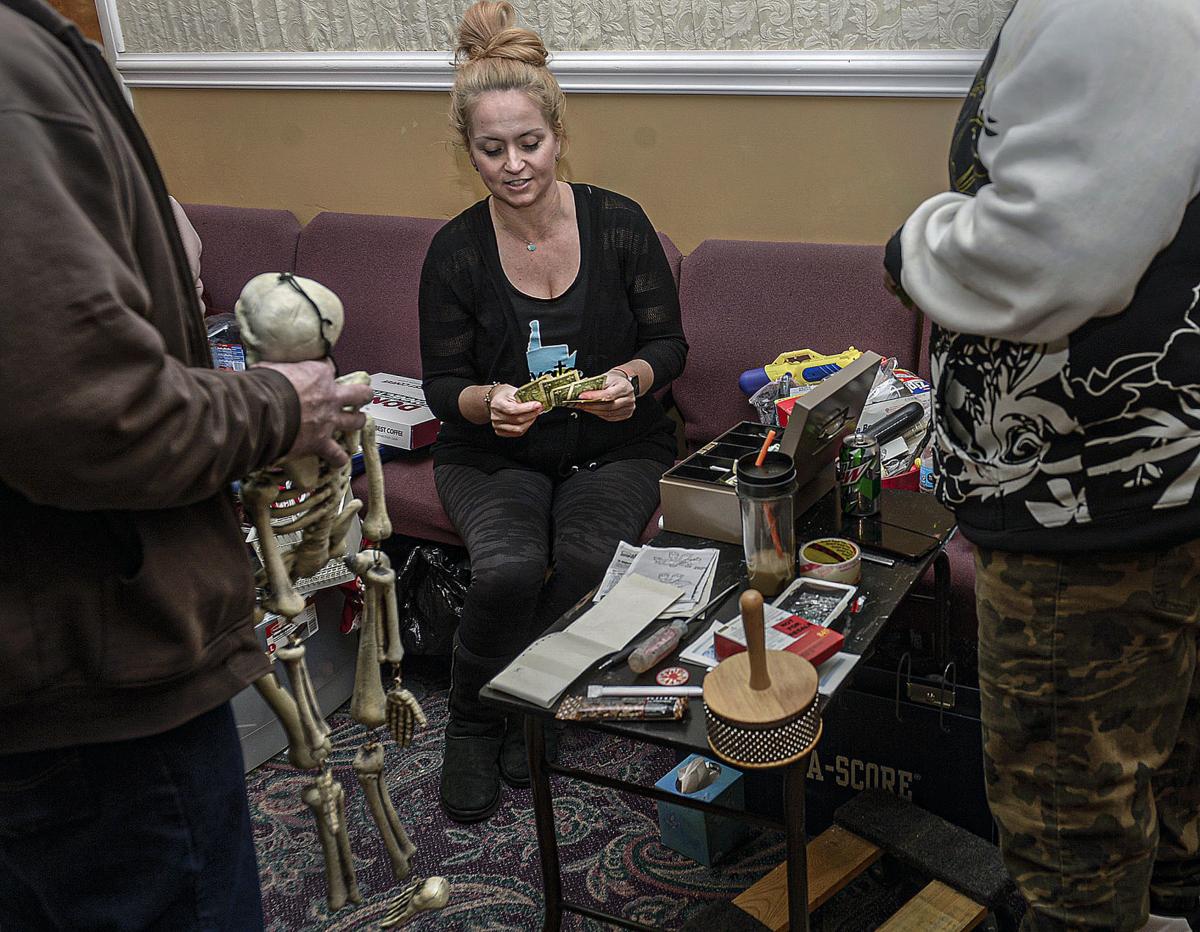 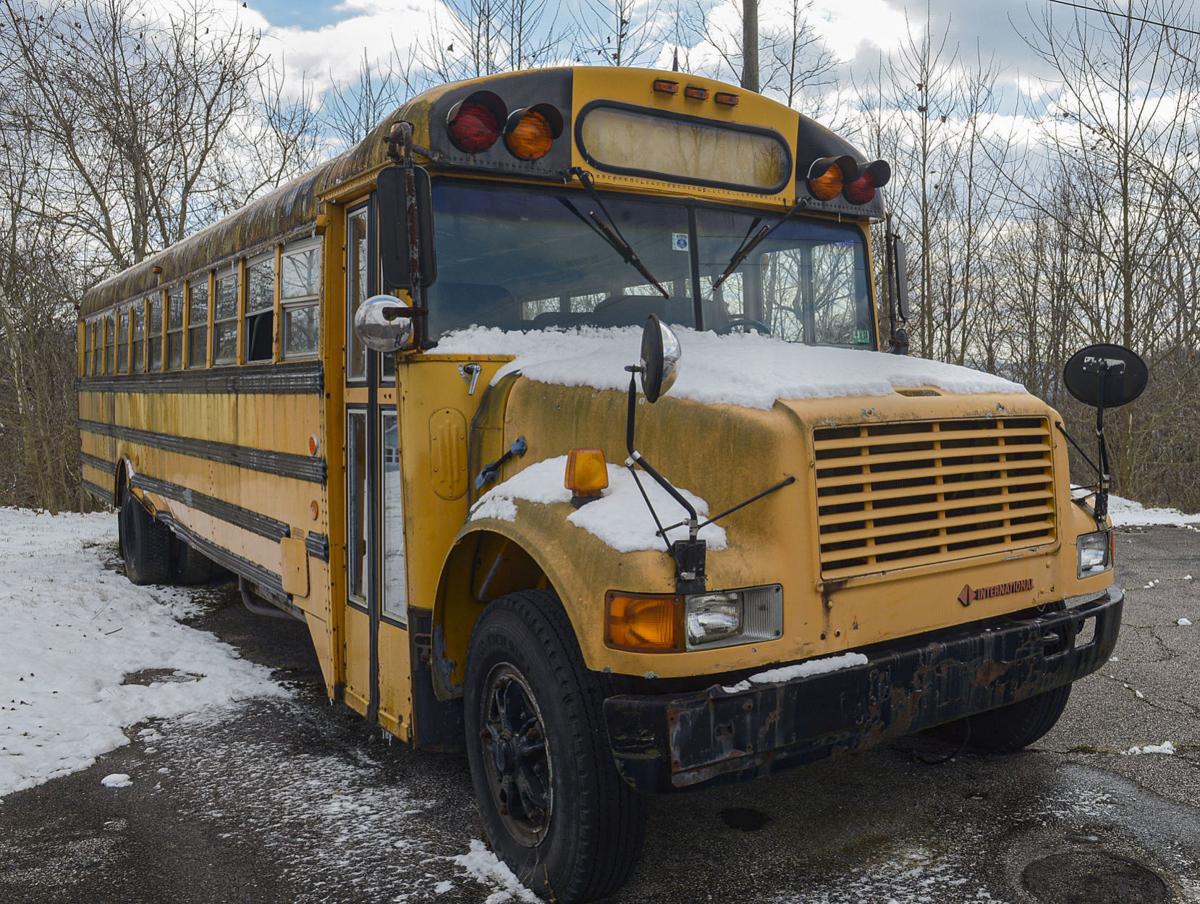 The school bus that will be renovated for a mobile wellness clinic sits outside Covenant Christian Fellowship's church. Congregation leaders held a liquidation sale Saturday, and will have another next week, to raise money to rehabilitate the bus. 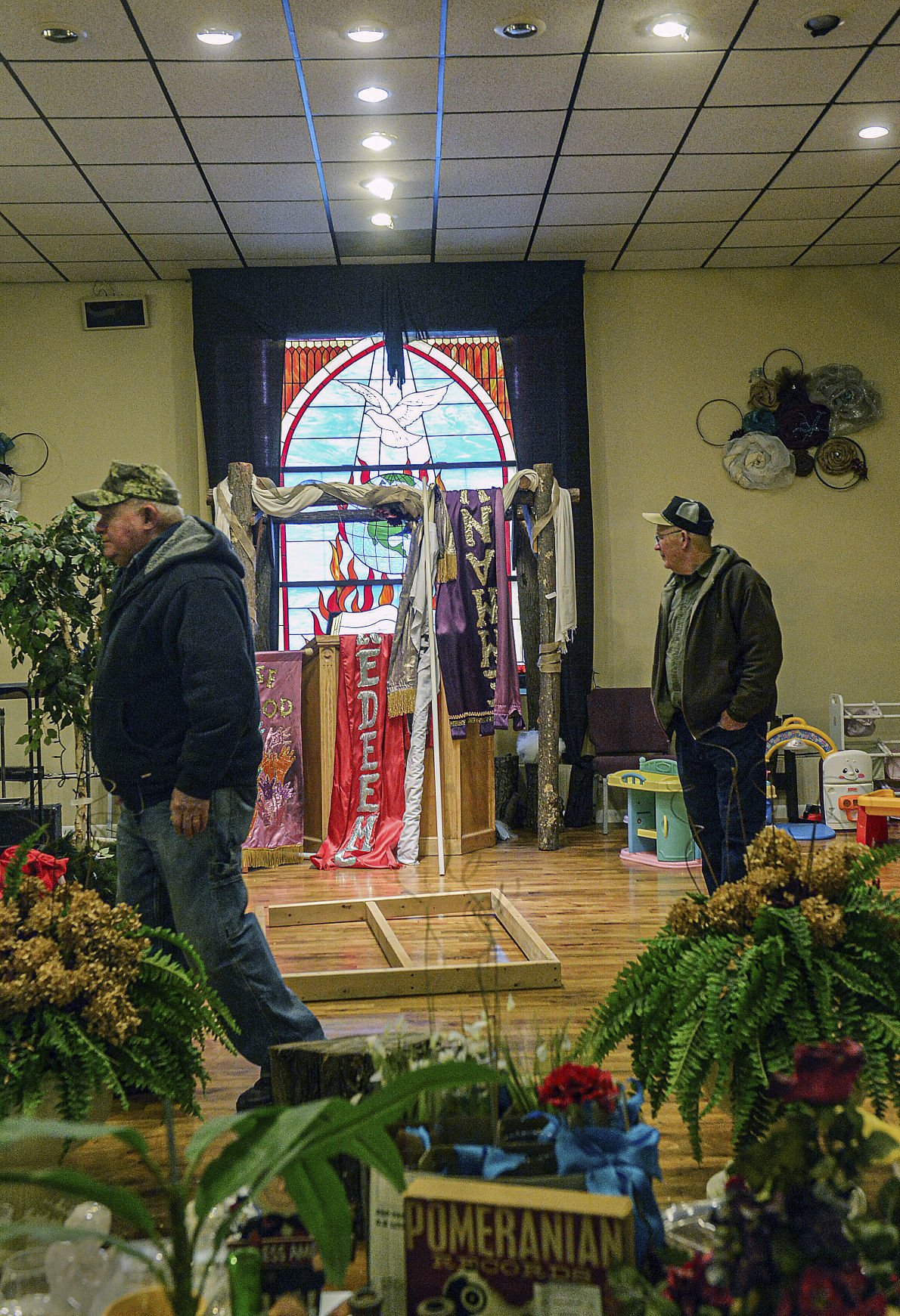 Prospective buyers look over items during Covenant Christian’s liquidation sale Saturday. The church is selling off its belongings in order to raise money to fund a mobile wellness clinic. 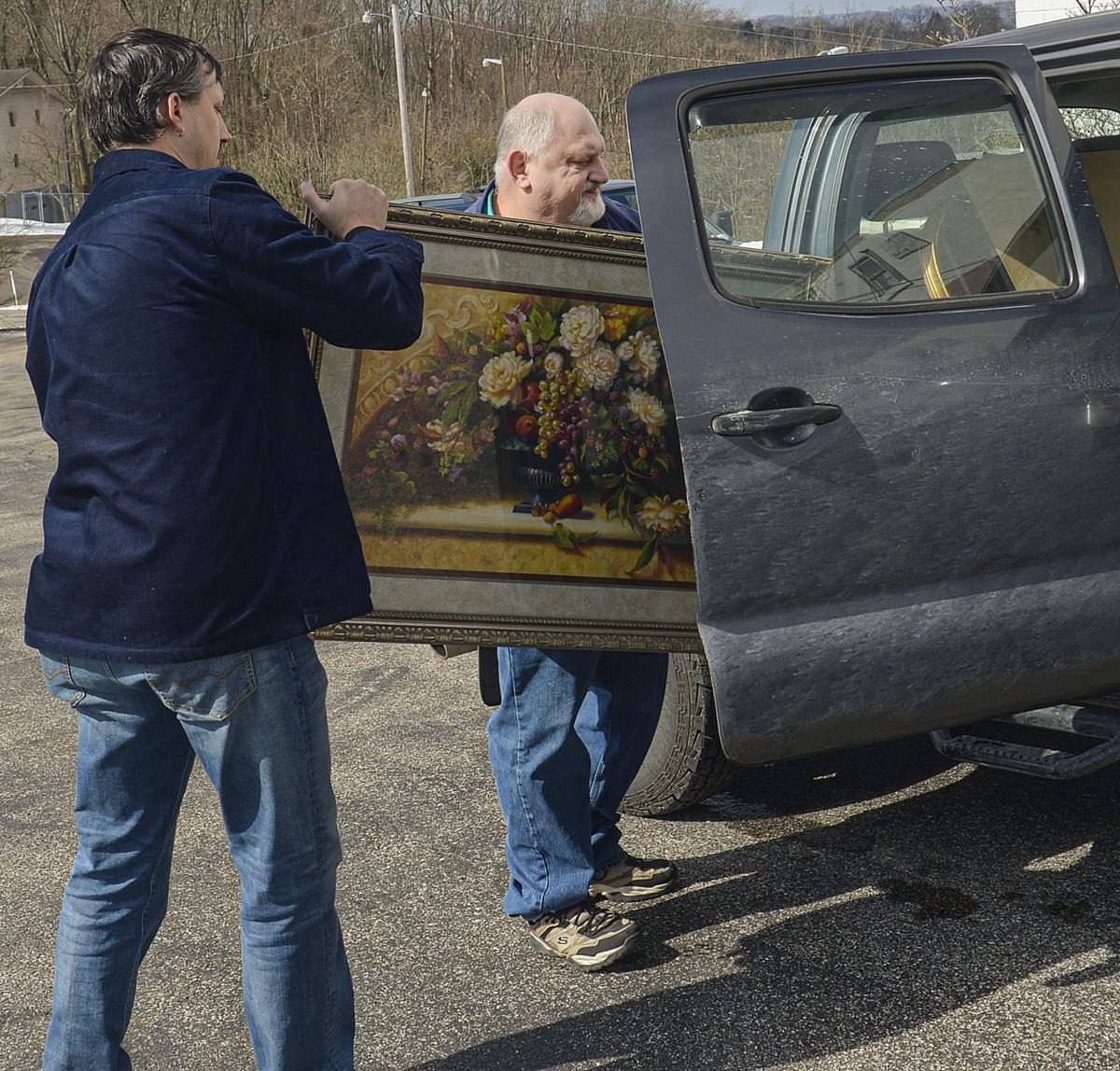 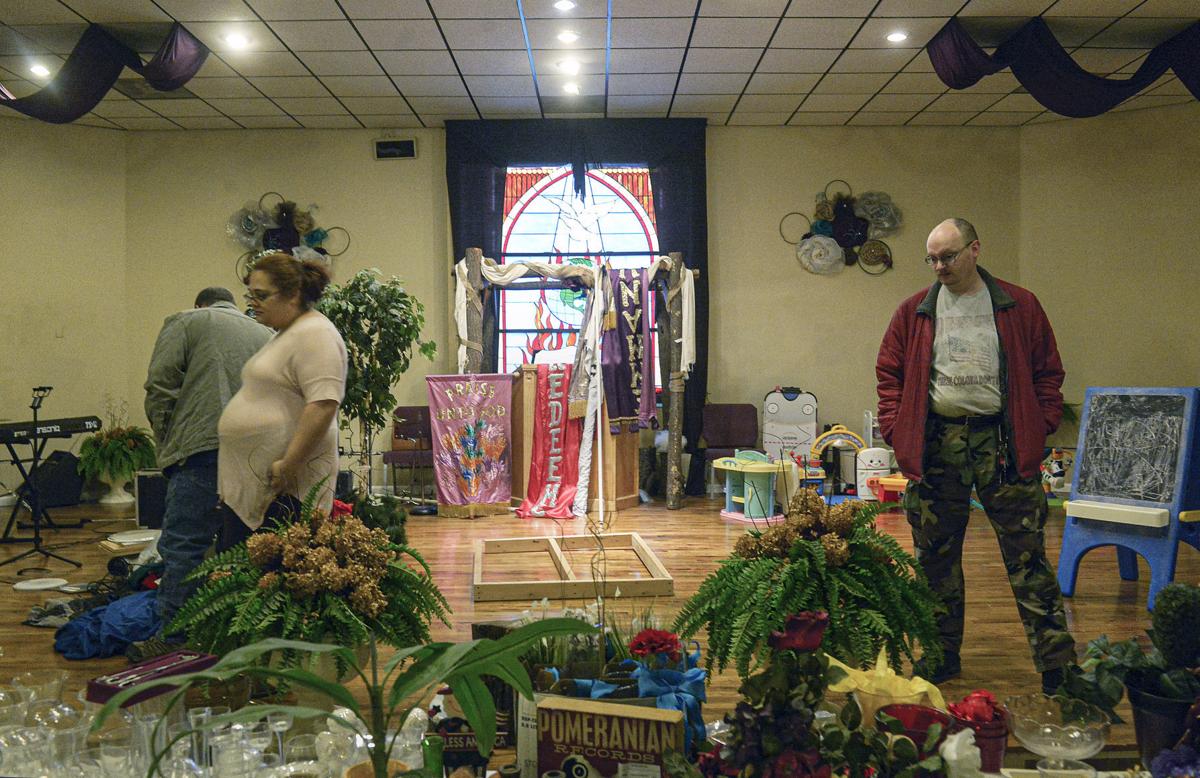 The school bus that will be renovated for a mobile wellness clinic sits outside Covenant Christian Fellowship's church. Congregation leaders held a liquidation sale Saturday, and will have another next week, to raise money to rehabilitate the bus.

Prospective buyers look over items during Covenant Christian’s liquidation sale Saturday. The church is selling off its belongings in order to raise money to fund a mobile wellness clinic.

For more than 40 years, Covenant Christian Fellowship has operated a somewhat traditional church service — congregation members meet every week at the church, off Oakridge Drive, to sing hymns, pray and and celebrate their fellowship.

Today, though, leaders of the congregation are starting a new mission: a mobile wellness clinic, run out of an old school bus, that will remove boundaries from their reach.

“In the Bible, it tells you to go out and meet people where they are, and that’s what we’re going to do,” said Neil Legg, pastor at Covenant Christian. “This is a bit scary and exciting all at once. We have a whole new adventure in front of us.”

The venture will be called Elevate, the original name of Covenant’s youth and student outreach program which Legg said has expanded substantially in the last few years.

Stephanie Legg, who is married to Neil, is trained as a therapist. She has experience working with children across the state who are suffering from, and trying to overcome, trauma. With a mobile wellness clinic, she hopes to be able to reach out to more kids in more places who are struggling.

“We can take this anywhere, to any population and provide them with the tools they need,” Legg said. “We’ll be able to make a deeper impact in people’s lives, and in addition to that, we can still do our church and fellowship, just in a different way. We’re excited — scared, yes, but excited — to see this come to light.”

Stephanie Legg said she sees this next step as a continuation of the “non-traditional” values she and her husband, as well as their congregation, espouse. Yes, she said, they are Christian and run a Christian church, but they tend to be “more real” about their beliefs and demeanor.

“That makes some people, usually those in other churches with, I guess, a different outlook on what Christianity looks like, uncomfortable sometimes — even angry,” Stephanie Legg said. “We’ve been criticized, judged for how we operate, but we’ve come to the realization that for us, our religion is based on being as Christ-like as we can. That means accepting and helping people, even in a nontraditional way.”

It’s a change, though. Neil Legg has been pastor at Covenant Christian for years, and before that, his father served there. He grew up in that church, and today he and Stephanie raise their three children in it. But they’re giving that up to fund their next pursuit.

Someone is set to buy the church building, but the Leggs and Covenant’s congregation held a liquidation sale Saturday to sell 40 years worth of belongings and raise money to renovate an old school bus into the mobile wellness clinic.

There was everything from Bibles and hymn books to kitchenware, costumes and decorations for sale, displayed in rows in the former sanctuary.

Stephanie Legg said it was emotional — she didn’t expect there to be as much stuff as there was.

“But they kept bringing it out and my eyes kept getting real wide. We’re saying goodbye to a lot here, some things I didn’t consider before today,” she said. “You know, they brought out these little crowns — little gold crowns from some play — and I had to step away and collect myself. This is, this was, our entire life.”

Shawn Price has volunteered with Covenant Christian for almost 10 years. He has four children, ranging in age from 5 to 11, and they grew up in the church’s halls alongside the Leggs’ children.

“I’m seeing things I haven’t seen in years today,” Price said. “There was a highchair — this old wooden one — that belonged to all of my kids at one point. We took it off the floor, we couldn’t put a fair price on it.”

Price said he plans to stay involved with Elevate as it moves forward, perhaps even getting more involved. The bus they’re going to renovate isn’t in great shape. It’s been sitting idle on the church’s property for about a decade. It needs more than just a new aesthetic — there’s a lot of mechanical work needed, too.

“It’s going to be a lot more work, and we know that, but it’s time,” Stephanie Legg said. “We’re not traditional, so why put ourselves in a traditional space?”

And now, without the limits of a brick-and-mortar building, there’s a bit more freedom, Price said.

“This is a freeing experience, and by being nontraditional we’re malleable, we can meet the needs of whoever we come across in a way, I think, a lot of other places can’t,” Price said. “Life is crazy, it can’t always be structured, and we reflect that — organized chaos, that’s what we say we’re dictated by here.”

Through the mobile wellness clinic, they hope to lessen that chaos for others, especially children, who may need some structure and help.

Stephanie Legg said that, while working with schools, the religious aspects are left out. Instead, she uses her specialties as a therapist and a yoga instructor to help train children to develop healthy coping mechanisms through a holistic approach.

And now, when the bus is finished and they can travel anywhere, they can bring similar services to anyone in need, not just children, while continuing to hold church-related services in different places.

“The poor and the needy, they can’t get to where you are, so we’re going to go to them,” Neil Legg said. “That’s our responsibility, I believe, to help people any way we can. Now we have more ways, and we’re going to use them to better our community and connect people to the resources they need when we’re able.”

The church will be hosting another liquidation sale from 9 a.m. to 1 p.m. March 7 at its location off Oakridge Drive. It’s cash only, and Stephanie Legg said all are welcome.