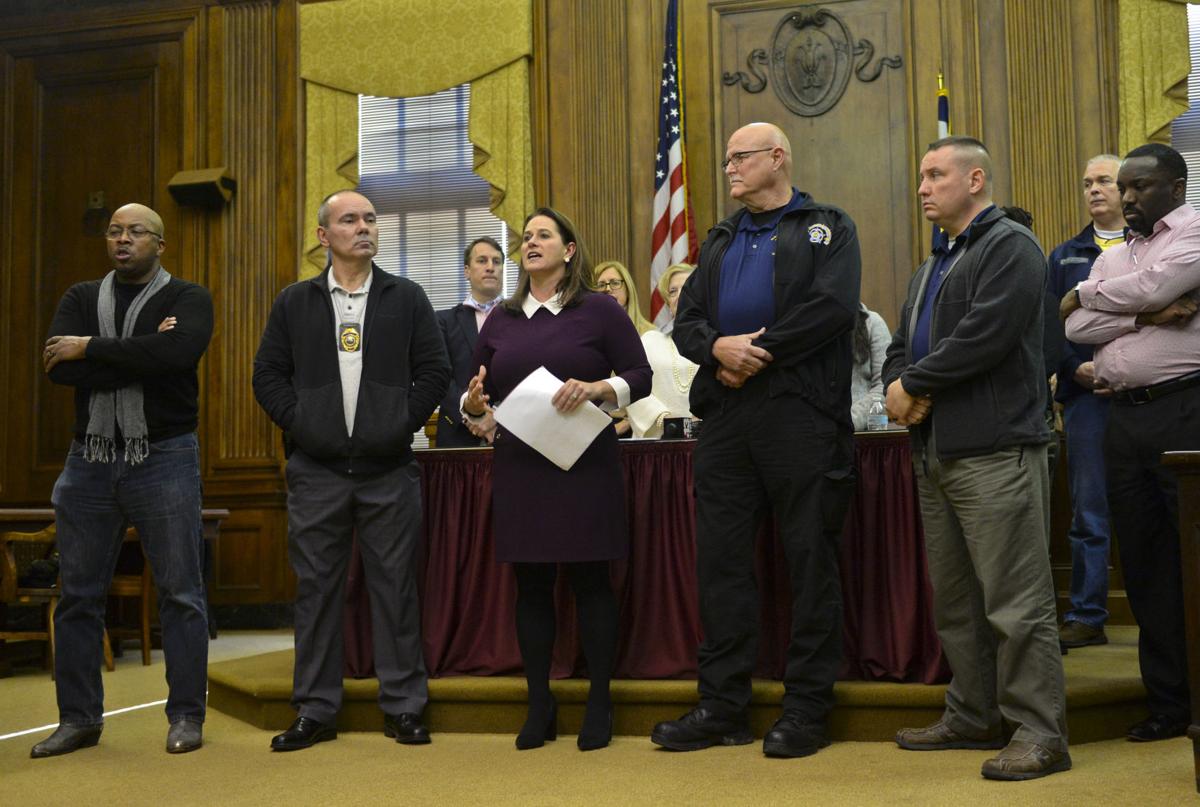 Charleston Mayor Amy Goodwin talks about the police incident where a women was stuck by a police officer. 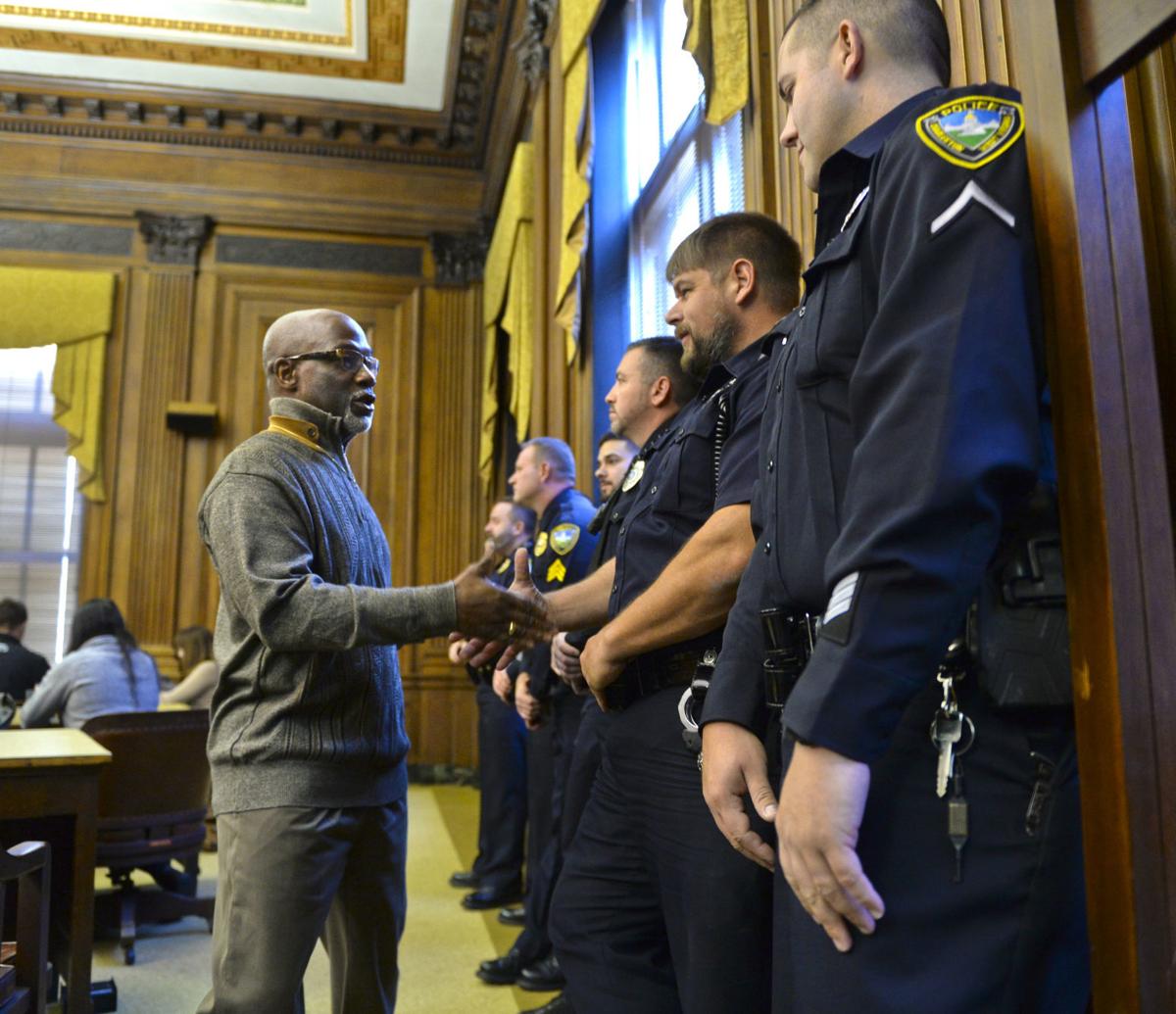 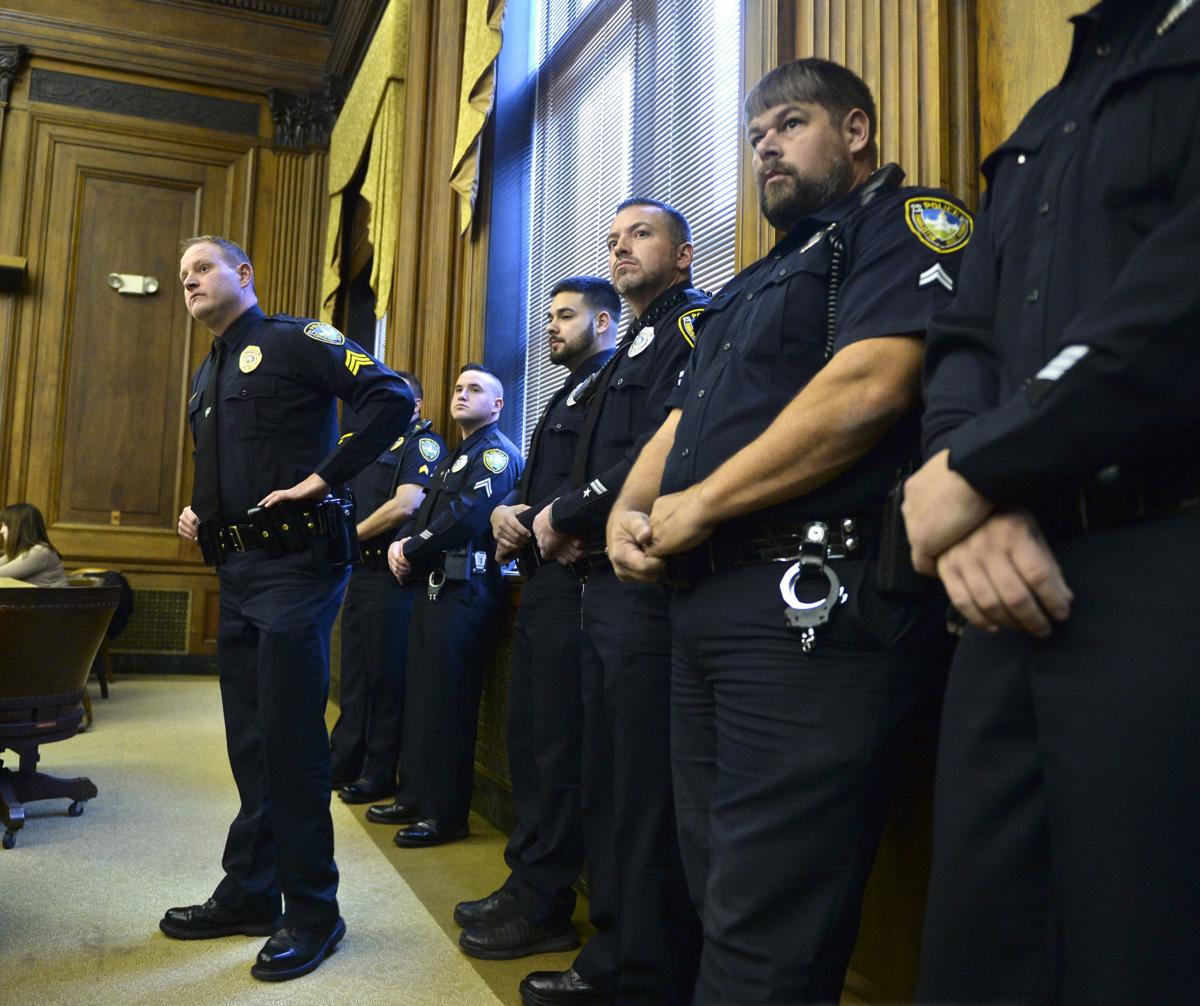 Charleston police officers listen to questions from the public during the news conference. 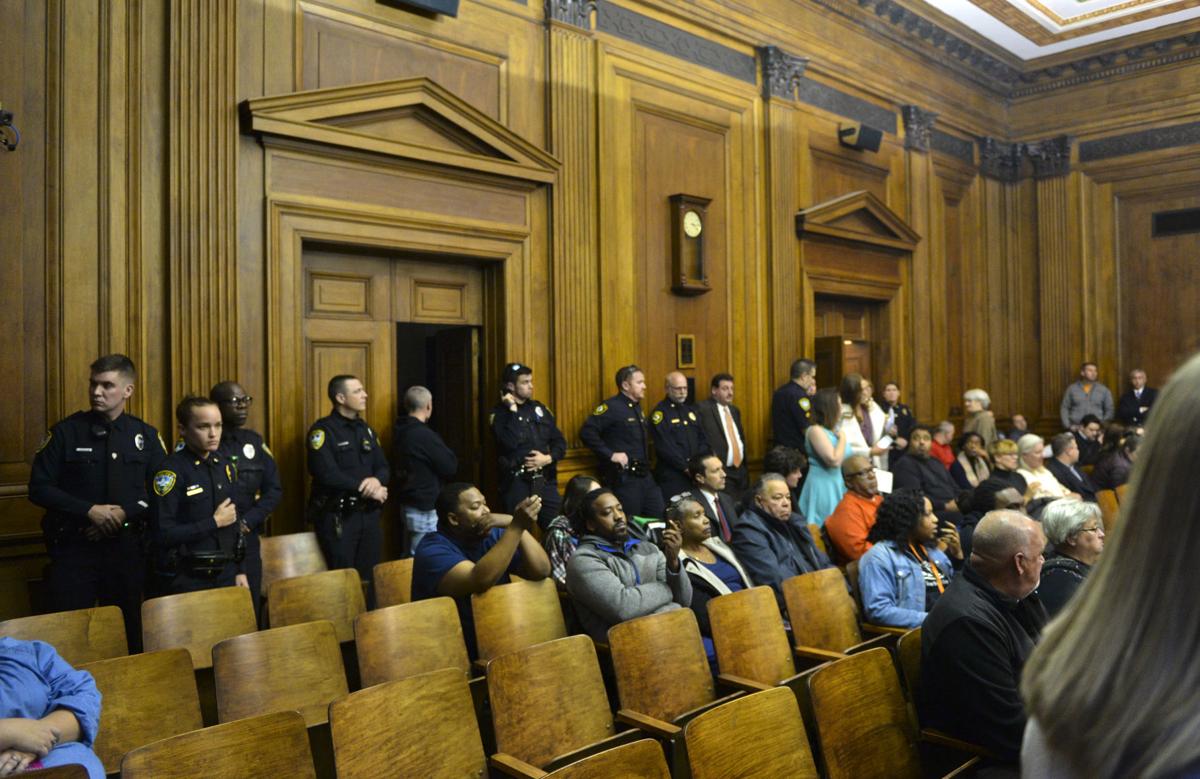 The mayor's news conference was moved to City Council chambers in Charleston City Hall because of the number of people who attended. 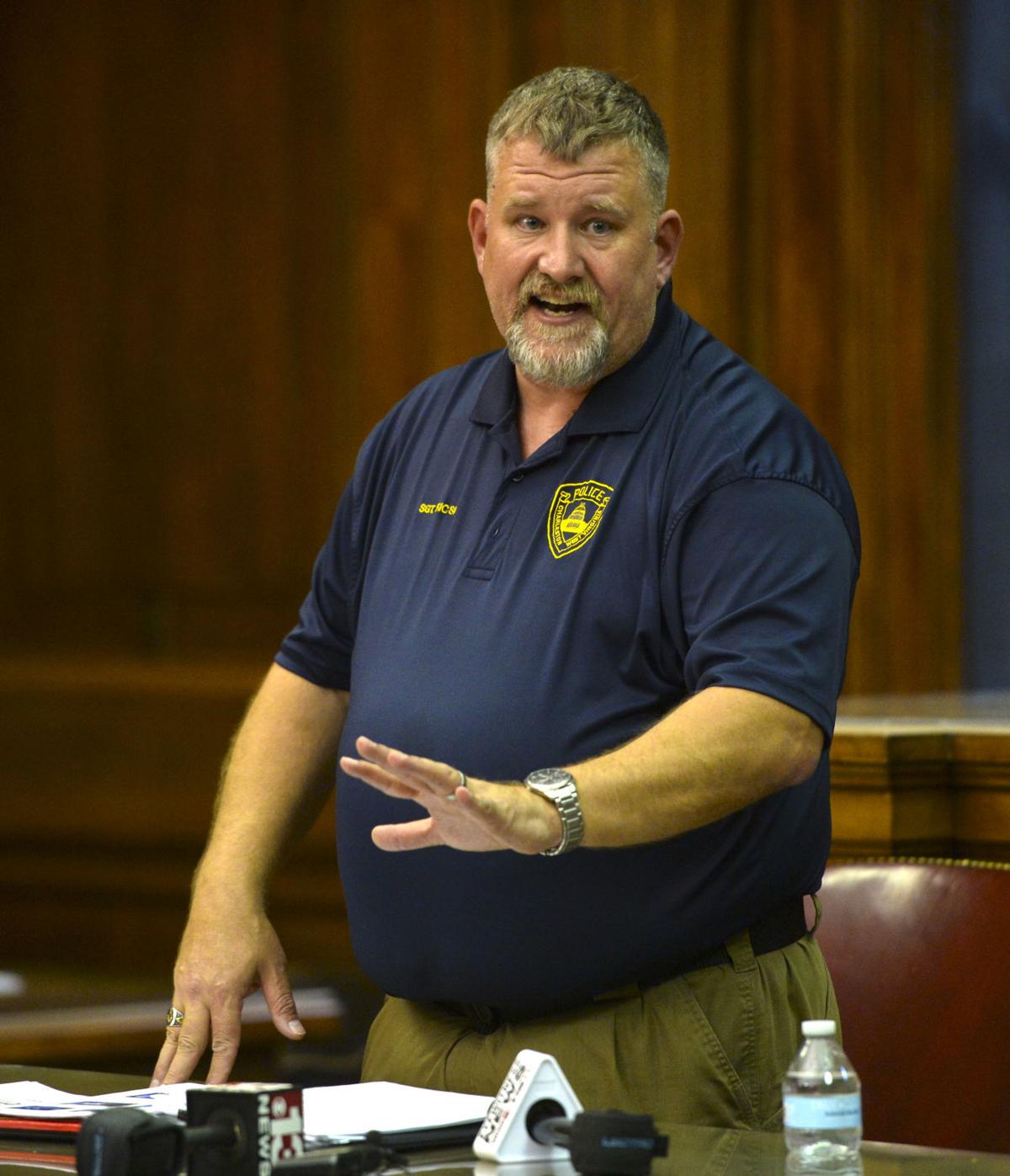 Retired Charleston policeman Eric Smith breaks down the video explaining what the officers did.

Charleston Mayor Amy Goodwin talks about the police incident where a women was stuck by a police officer.

Charleston police officers listen to questions from the public during the news conference.

The mayor's news conference was moved to City Council chambers in Charleston City Hall because of the number of people who attended.

Retired Charleston policeman Eric Smith breaks down the video explaining what the officers did.

Mayor Amy Shuler Goodwin made the announcement Thursday afternoon at a news conference that combined what were previously scheduled separate conferences planned by the Mayor’s Office and the police department.

More than 100 people attended the news conference in Charleston City Council chambers, where dozens of uniformed police officers lined the walls and community leaders and citizens filled the benches.

The announcement of the FBI referral came 10 days after the Concerned Clergy Coalition asked Goodwin to facilitate an external investigation into the arrest of Freda Gilmore on Oct. 14.

Gilmore’s arrest was filmed by a bystander, who also was arrested, and shared widely on social media before being picked up by news outlets.

The video and police records indicate two officers, Carlie McCoy and Joshua Mena, struck Freda Gilmore, whose family has said has special needs, while they arrested her following a fight at the Family Dollar along Virginia Street.

An internal police department investigation cleared McCoy and Mena of any violations of department policy. In response, Goodwin and Smith said on Oct. 25 that they were in the early stages of reviewing the department’s use-of-force policy.

On Thursday, Goodwin said former Charleston Police Chief Dallas Staples would be part of the policy amendment process. City of Charleston policy requires that the mayor, police chief and city attorney sign off on any changes to police policies before they can go into effect.

The coalition submitted a request for an external investigation into Gilmore’s arrest to Goodwin during a community forum on Nov. 5 at Emmanuel Baptist Church, on Charleston’s West Side.

Goodwin and 22 of the 26 Charleston City Council members signed a letter addressed to the coalition Thursday.

In the letter, Goodwin said she was working with police officials to review department policy and procedures. She also vowed to provide more financial and other support for the department to better recruit, train and keep officers on the force, as well as equip them with body cameras.

During the combined news conference, Goodwin, Smith, the Rev. Marlon Collins, local Fraternal Order of Police President Erik Miller and West Virginia FOP President Steve Walker said no one intended an “us vs. them” scenario, and they acknowledged that their respective organizations had not communicated well with each other.

“We know this is a very trying time for our community,” Goodwin said. “We know that. But what we also know is we have to open up conversations. ... I know that our police department, they want what we want, which is a safe and vibrant community. We want the same thing.”

Collins said different groups had pooled together and blurred the lines of facts and understanding of the incident and actions by city officials and community leaders.

He also said that, even though there had been “black and white elements” to Gilmore’s arrest, with Gilmore being a black woman and the officers being white, religious and community leaders didn’t want to focus on that.

“I can say everyone here cares enough about this community to do the right thing for the community,” Collins said. “We did not want this to be an us against the police issue. We wanted a review in policy that would keep certain people safe and keep police safe, as well. This wasn’t about taking power away from the police. This was dealing with an issue that we’re dealing with across the country — and what we’re trying to do is not have it happen again.”

The four council members who did not sign Goodwin’s letter were Adam Knauff, Shannon Snodgrass, Courtney Persinger and Brady Campbell. Campbell, who spoke in support of police, said he wasn’t hearing support for police officers prior to the start of the news conference of city and police officials and local pastors.

Walker said Campbell asked him to go to the police news conference. Walker, standing behind Goodwin during the joint conference, said he wanted to be sure police officers have influence in the policy changes, since they would be the ones to put them into practice.

“A policy is a living, breathing element,” Walker said. “The thing is, you’ve got to get together and focus on the well-being for the police officers and the well-being for citizens. Everybody needs to treat each other with respect and dignity, and it’s not happening. That’s our issue.”

When the combined news conference ended, Campbell and retired Charleston police sergeant Eric Smith continued the police conference, with Smith describing the police perspective on Gilmore’s arrest, saying it was helpful for the community to be educated about officer training.

That conference ended as two women in the crowd responded to what Smith said.

One woman said police “hijacked” the event. Another, addressing Smith, asked if there was training to better help officers identify when someone is experiencing psychosis and respond without using unnecessary violence.

Three police officers in the crowd responded to the woman at different times, and the conference ended amid that conversation.

In Thursday’s letter, Goodwin said that, if the FBI finds it necessary, investigators can refer this matter to the Kanawha County Prosecuting Attorney’s Office.

Goodwin also said police will post the department’s policies on its website, although there was no deadline set as to when the department policies would be posted online.

Goodwin said she intends to create a Charleston Police Department Citizen Advisory Council, which would be made up of individuals throughout Charleston who “represent diverse demographics and occupations.” The group would act as a liaison between the police department and the community, Goodwin said.

Gilmore was held at the South Central Regional Jail for five days before she was released on bail.

Alisyn Proctor, 24, of Charleston, the woman who filmed Gilmore’s arrest and posted it to Facebook under the name Mollie Monroe, was charged with misdemeanor disorderly conduct, for allegedly screaming profanities at the police.

Gilmore’s father and stepmother, Richard and Kim Gilmore, have said Freda Gilmore has special needs. They also said they intend to sue the city over the incident.

contributed to this report.