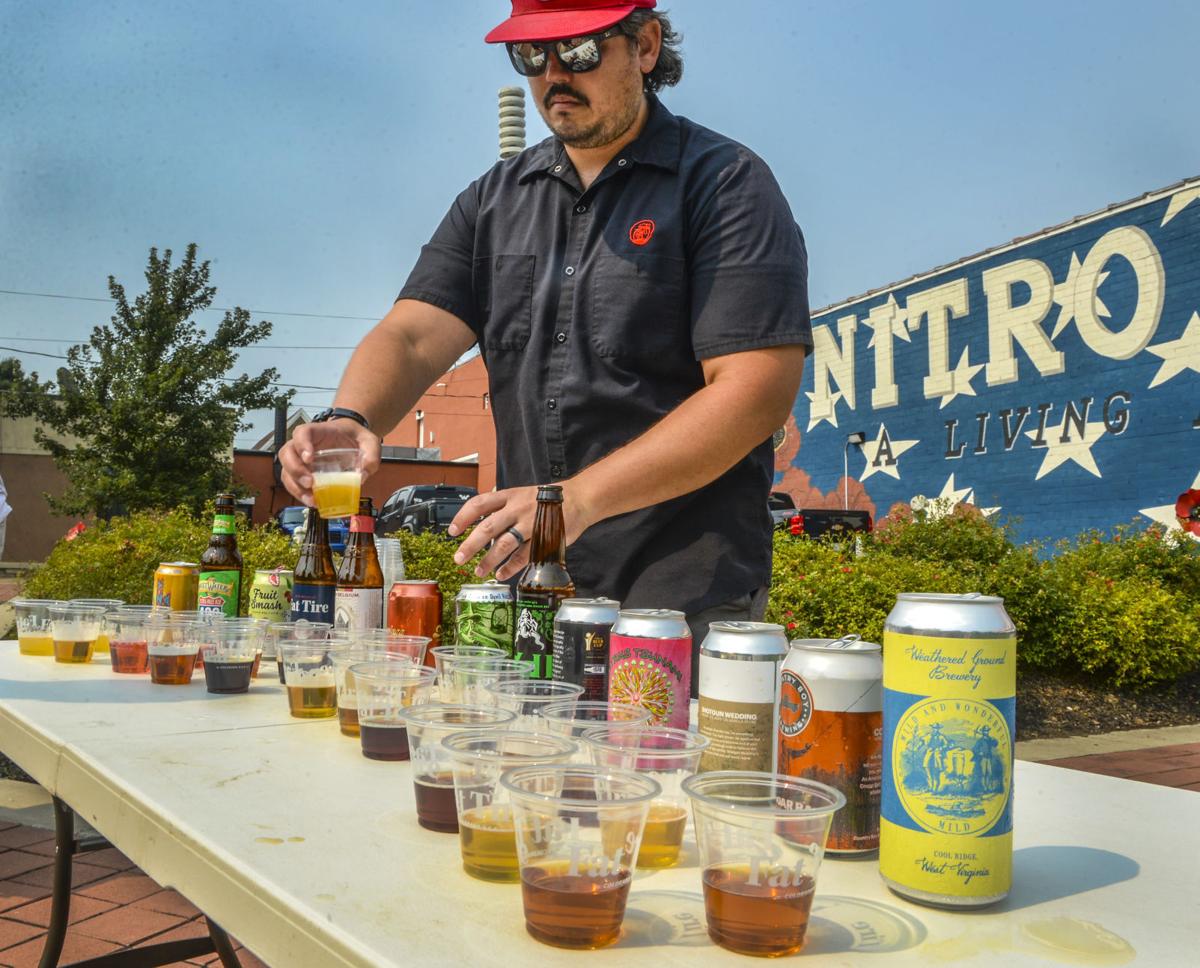 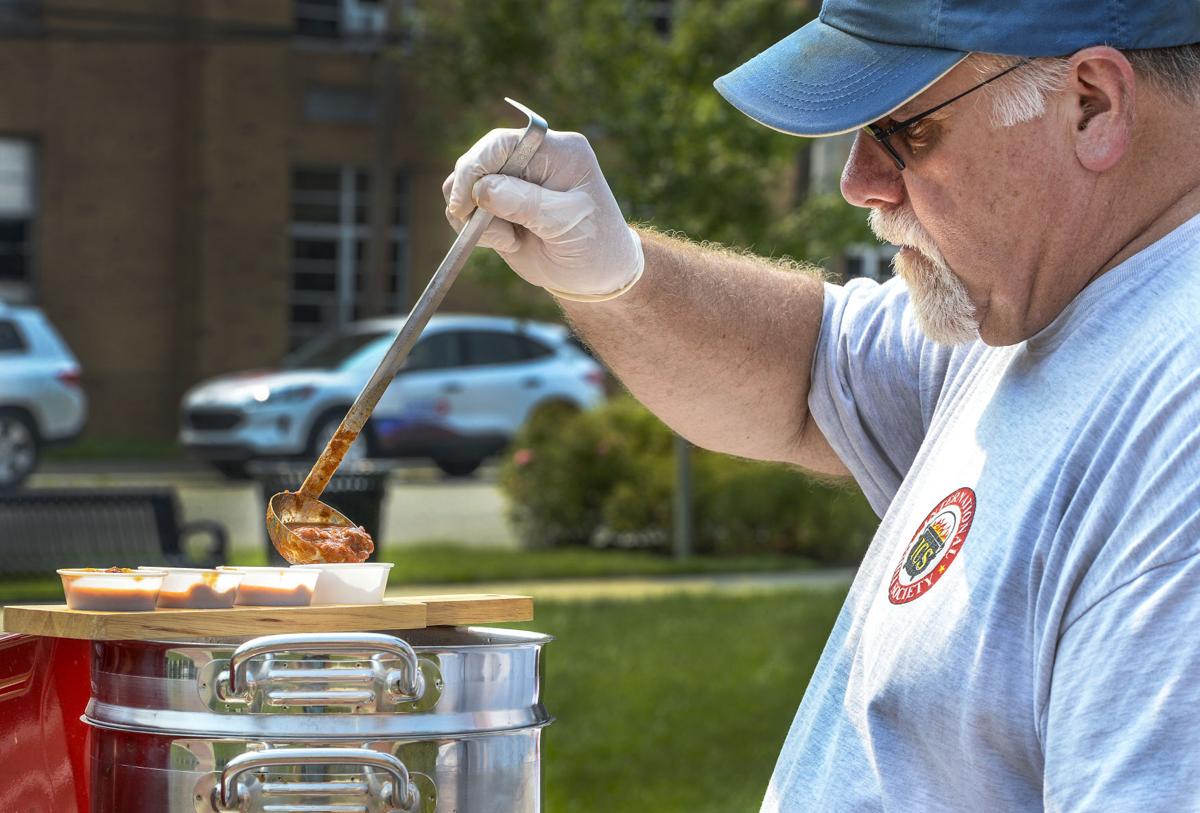 Jim Kerrigan, an award-winning chili cook, dishes out samples of his chili at a news conference announcing the Wagging Tails & Nitro Ales: Smoke on the Water edition Thursday in Nitro.

Jim Kerrigan, an award-winning chili cook, dishes out samples of his chili at a news conference announcing the Wagging Tails & Nitro Ales: Smoke on the Water edition Thursday in Nitro.

Some things just go together — like salt and pepper, peanut butter and chocolate, or chili and beer on a brisk fall day.

Which is why two well-known, festive Kanawha County events — Wagging Tails and Nitro Ales, along with Charleston’s popular Smoke on the Water Chili Cookoff — are teaming up for a single festival later this year after each was sidelined in 2020.

“On Saturday, Nov. 13, we are going to have the Wagging Tails and Nitro Ales Chili Cookoff: Smoke on the Water edition,” Joe Stevens, executive director of the Nitro Convention & Visitors Bureau, announced Tuesday morning.

Both annual events were canceled in 2020 because of the COVID-19 pandemic. While many pandemic-related restrictions have been lifted this year, that didn’t happen in time to allow for the planning and preparation needed to organize Smoke on the Water, which usually takes place in conjunction with the capital city’s summertime FestivALL celebration.

Smoke on the Water typically draws dozens of competitors from across the nation, and even some international cooks, who all need time to get ready for the competition and travel.

“By the time the guidelines were relaxed, and we had some information, there really wasn’t time for us to prepare” for Smoke on the Water to take place in June, said Jennifer Piercy, a longtime organizer of the event.

But with restrictions easing, there was time to plan an event for November.

There already was some overlap between the two events, so, when both sides began to consider a merger, at least temporarily, “We thought it was a natural fit,” Piercy said.

“About five years ago, Wagging Tales came to Nitro ... and, through the tremendous support of the city, it has grown to be a big success,” Jim LeFew, co-founder of the Wagging Tales event, said. “It has gotten bigger every year, and we’re all excited about Smoke on the Water coming with us.”

Something else that made sense to organizers: raising funds for the two charities that have benefited in the past from the two separate events.

Wagging Tales and Nitro Ales raises funds to benefit Dog Bless, a rescue advocacy group that works to find foster and permanent homes for sometimes hard-to-place shelter pets before they are euthanized. Smoke on the Water raises funds for the HospiceCare organization, which provides palliative and hospice care for patients living with serious illness and end-of-life needs.

This year’s combined event will raise funds for both nonprofits.

This year’s event will include the Local Heroes chili cookoff category, something that’s been a highly competitive part of Wagging Tails in year’s past.

“That is any and all first responders, law enforcement, military. They compete against each other so they can have the bragging rights of being the best cook in the area,” LeFew said.

But the 2021 edition includes a twist.

Johnson, a Charleston police officer, was shot and killed in the line of duty last December.

“Prior to becoming a police officer, Cassie was the humane officer for the city of Charleston,” Sampson said. “And so, in honor of her dedication to making the world a better place for both people and animals, we are very proud to be naming our award the Cassie Johnson Award.”

As an event sanctioned by the International Chili Society, organizers are hoping this year’s combined event will attract even more competitors. They expect upward of 50 entries this year, in addition to food trucks, music and vendors.

“Our last in-person Smoke on the Water event was in 2019, where we had 43 competition cooks,” Piercy said. “We have cooks come from across the nation. We’ve had them come in from Canada. So we’re excited to have them come back and show off yet another area of Kanawha County that we take a lot of pride in.”