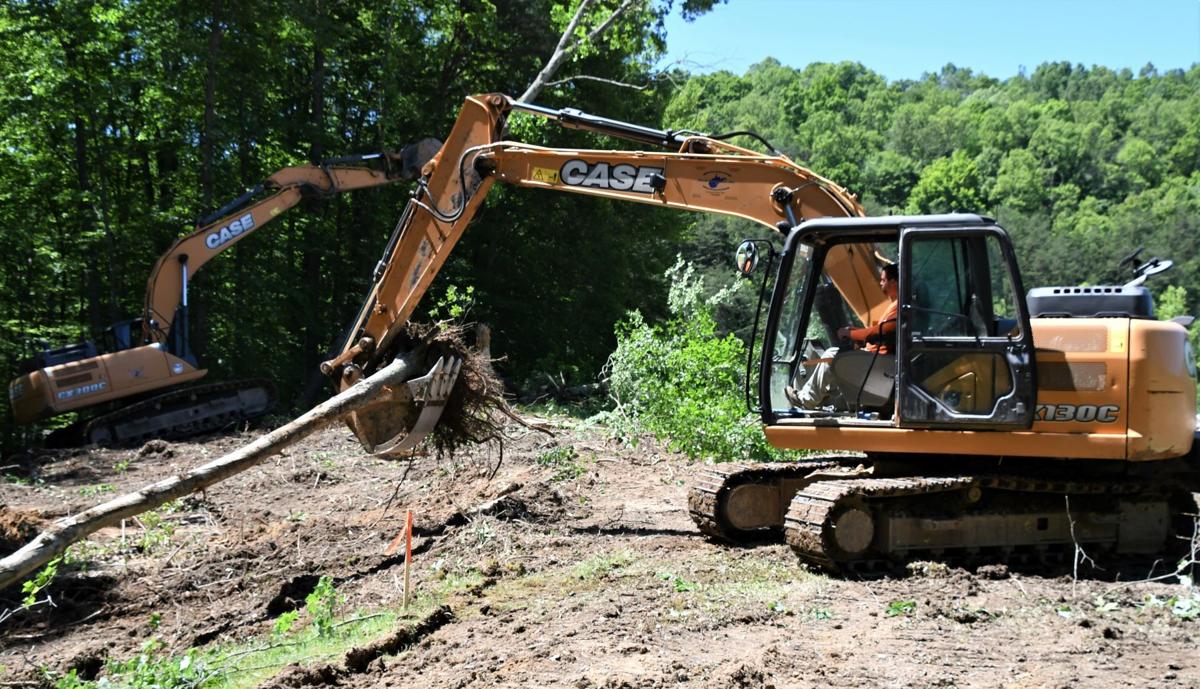 Workers for Wolf Creek Contracting have cleared trees and are preparing the ground where the new Claudia L. Workman Wildlife Education Center will be erected. The center will be the centerpiece of the Forks of Coal State Natural Area, near Alum Creek.

Visitors to the Claudia L. Workman Wildlife Education Center will be surrounded by exhibits that display the Forks of Coal State Natural Area’s fish, wildlife and ecology.

Workers for Wolf Creek Contracting have cleared trees and are preparing the ground where the new Claudia L. Workman Wildlife Education Center will be erected. The center will be the centerpiece of the Forks of Coal State Natural Area, near Alum Creek.

Visitors to the Claudia L. Workman Wildlife Education Center will be surrounded by exhibits that display the Forks of Coal State Natural Area’s fish, wildlife and ecology.

ALUM CREEK — After 31/2 years of planning, the final phases of work on West Virginia’s newest nature center are underway.

Workers began clearing trees and excavating foundations for the Claudia L. Workman Wildlife Education Center on Monday. If all goes as planned, the 7,000-square-foot facility will open to visitors in 12 to 18 months.

When complete, the center will become the centerpiece of the 105-acre Forks of Coal State Natural Area. Businessman Jack Workman donated the property to the West Virginia Division of Natural Resources in November 2015, on the condition that a nature center be built there in honor of his late wife, an amateur naturalist.

The $6.36 million facility will be built with money from several sources, including interest from the DNR’s Kanawha River Endowment Fund, revenue from oil and gas royalty payments and donations through the Forks of Coal State Natural Area Foundation.

The building and its exhibits will cost more than $4 million to construct. On May 28, Gov. Jim Justice announced that the center would receive a $959,613 grant from the state’s Abandoned Mine Lands fund to cover the exhibit costs.

Plans for the building have been in place since 2017, but the state’s notoriously slow bidding and procurement procedures delayed its construction until this year. Members of the Forks of Coal Foundation, who chafed at the delays, were elated by the grant announcement and the start of construction.

“The first thing I thought was, ‘I’m going to turn cartwheels, I don’t care how old I am,’” Master Naturalist Diana Green said. “It was an exciting moment.”

Art Shomo, who coordinated the DNR’s role in the center until he retired from the agency in 2019, said he “didn’t think it would take this long [for construction to begin].”

“I’m happy now that the building is being worked on,” he added. “Now we need to get busy on the exhibits.”

Visitors to the center will walk under a vaulted, timber-framed ceiling into the center’s exhibit hall. A carpet pathway — blue, to simulate the Coal River and its two main tributaries — will wind through the exhibits.

Just inside the entrance, a 1,500-gallon aquarium will feature fish species native to the river. An exhibit that features some small live animals will be located nearby.

“There will be exhibits that deal with wildlife management, wildlife habitat, forest growth and succession, and law enforcement,” Shomo said.

The exhibits, designed by Split Rock Studios, a professional design firm from Arden Hills, Minnesota, will feature a section devoted to full-body taxidermy mounts of animals found in Southern West Virginia. Another section will detail how young forests grow to become mature forests. Yet another will focus on famous conservationists.

Still another portion of the exhibit will focus on how law enforcement helps protect wildlife and the environment.

Because the center is expected to attract students from area schools, one exhibit will give youngsters an opportunity to arrange rock-shaped foam pillows into simulated stream-improvement structures on the center’s blue-carpeted “rivers.”

“A lot of stream improvement has been done in the Coal watershed, using the same structures the kids will be imitating,” Shomo said.

Large windows across the back of the exhibit area will give visitors an opportunity to look for birds in the nearby trees, and electronic recordings allow visitors to hear the calls of several common local species.

Part of the building will include a classroom that will accommodate up to 50 people. DNR officials expect it to attract classes from local elementary, middle and high schools, as well as students from the University of Charleston, West Virginia State University and Marshall University.

“Within a 50-minute drive of the center, there are more than 120 public schools,” Green said. “If you add in the universities within an hour’s drive, you have a student population of 68,000-plus.

“The general population of the counties closest to the center is 318,000 people, so the center has the potential to serve a lot of folks.”

A DNR employee will be in charge of the center, but it also will rely heavily on volunteers to staff its exhibits, lead nature hikes and help maintain trails.

Leanna Preston, a member of the Forks of Coal Foundation, said foundation members are still figuring out the role they’ll have once the building is complete.

“We’re working out through the memorandum [of understanding with the DNR] how the relationship with the foundation will be,” she added. “Some of it isn’t well-defined, but we’re working on it.”

She said foundation volunteers routinely help with trail maintenance. Last year, they planted wildflowers along one of the nature trails. This year, they’ve been spreading compost over the wildflower area.

Despite the construction taking place, most of the area’s trail network will remain open to visitors. Since it opened to the public on June 2, 2016, Forks of Coal has become a popular place for birders, hikers, trail runners and wildlife watchers.