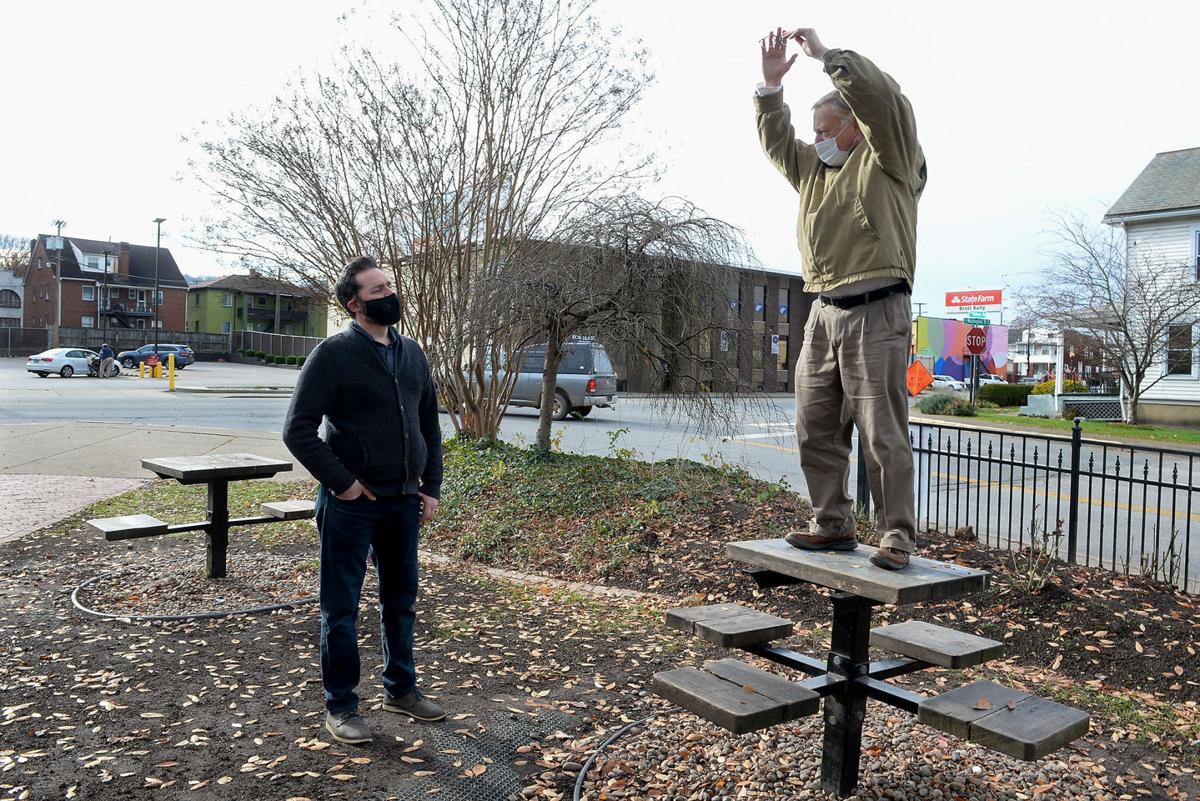 Carl Maxwell one of the founders of the Living AIDS Memorial Garden, shows Jeff Pierson, Charleston’s director of the Office of Public Art, how high the new sculpture by Jeff Fetty will be after it’s installed in place of the table Maxwell is standing on. 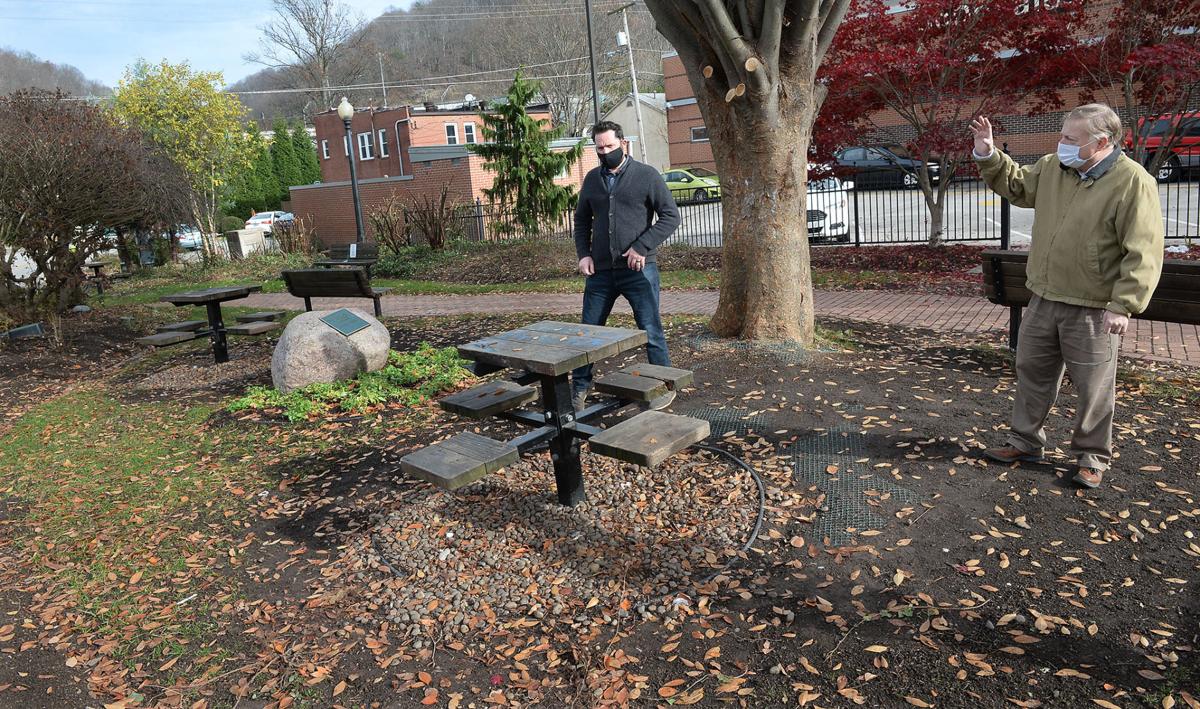 Jeff Pierson (left) Charleston's director of the Office of Public Art, and Carl Maxwell, one of the founders of the Living AIDS Memorial Garden, stand in the park where a new sculpture by Jeff Fetty will be installed in place of the table in front of them. 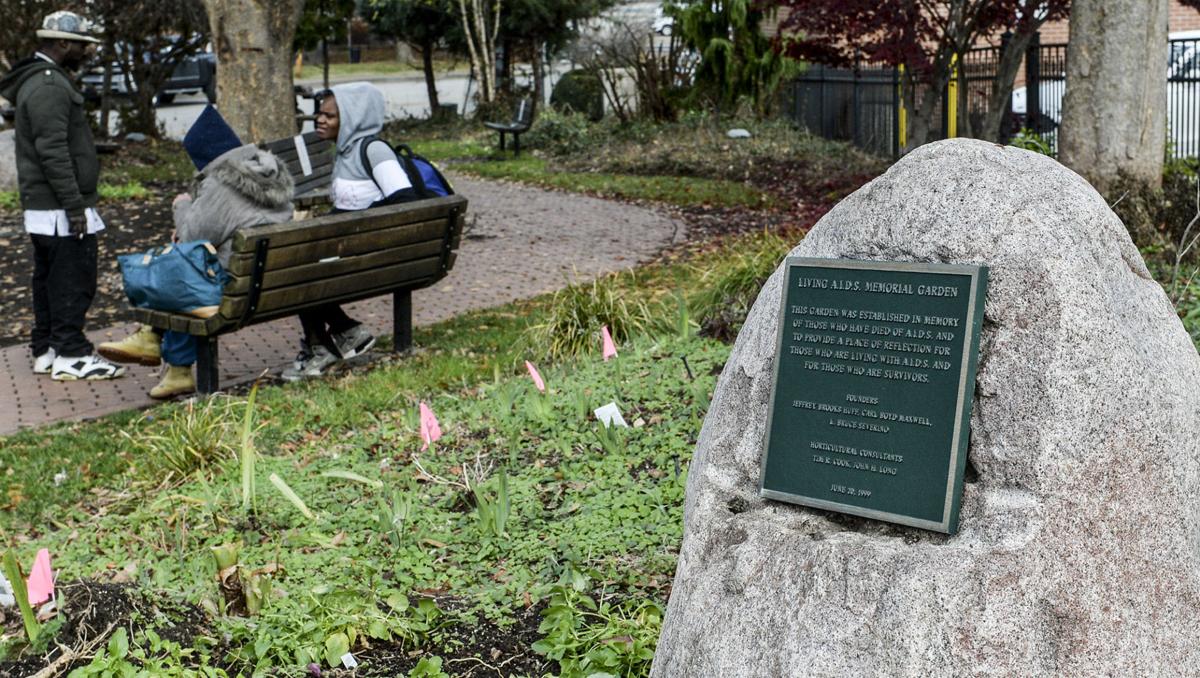 The Living AIDS Memorial Garden, located on Washington Street East, next to McDonald’s, was created in 1999.

Carl Maxwell one of the founders of the Living AIDS Memorial Garden, shows Jeff Pierson, Charleston’s director of the Office of Public Art, how high the new sculpture by Jeff Fetty will be after it’s installed in place of the table Maxwell is standing on.

Jeff Pierson (left) Charleston's director of the Office of Public Art, and Carl Maxwell, one of the founders of the Living AIDS Memorial Garden, stand in the park where a new sculpture by Jeff Fetty will be installed in place of the table in front of them.

The Living AIDS Memorial Garden, located on Washington Street East, next to McDonald’s, was created in 1999.

Millions of people around the world are fighting their second bout against an unknown global killer.

Roger Banks has lived with HIV for 27 years. Banks, who grew up in Logan County, directed a documentary on the HIV/AIDS epidemic in West Virginia, telling the stories of people who were affected by the virus and the history behind the Living AIDS Memorial Garden on Charleston’s East End.

The first episode aired on Vimeo on Tuesday — World AIDS Day. World AIDS day has been recognized internationally every Dec. 1 since 1988, commemorating those who have died of HIV/AIDS. When it started, it was the world’s first global health day, according to the World AIDS Day website.

Despite the virus only being identified in 1984, more than 35 million people have died of HIV/AIDS, making it one of the most destructive epidemics in history.

Banks is one of an estimated 38 million people globally who live with HIV/AIDS today. The disease significantly weakens the immune system, leaving people vulnerable to infection and death.

The two-minute teaser for Banks’ three-episode documentary, titled “For The Living,” takes place in the memorial garden. The garden has been on the corner of Washington Street East and Sidney Avenue since June 20, 1999. It was founded by Carl Maxwell, Bruce Severino and the late Jeff Huff.

Annually on Dec. 1, the garden hosts a candlelight vigil to honor those lost to the disease. It was not held this year because of the COVID-19 pandemic.

The feeling that haunted millions of LGBTQ people in the early days of the AIDS epidemic returned in 2020, when COVID-19 brought the United States to its knees. The fear of the unknown, but now it felt familiar.

“I’ll be honest. I had a lot of flashbacks. I really did,” Banks said by phone. “I’ve talked to other people with HIV and many of us have experienced the same thing — almost a reliving of the AIDS pandemic — but this time it was through everybody.”

Banks has visited the garden before. He went with a friend from Morgantown, he said, because it was hard to go alone. It was still an emotional experience.

The garden’s brick walkway lists the names of West Virginians and other Americans who have died from AIDS — it also includes messages to loved ones and names of some supporters of the garden.

“As I walked up the sidewalk and saw all the bricks, I was just amazed how many names I knew. One in particular, my best friend who I lost,” Banks said.

Facing the entrance to the garden, on the east side of the brick walkway is the Wildflower Garden, and on the west side of the site sits the Rose Garden. It’s been like that since its creation, but now the garden is undergoing major renovations.

A 10-foot metal sculpture of the red ribbon will be the most prominent addition to the garden. The red ribbon is the universal symbol of awareness and support for people living with HIV.

The sculpture, which is finished, will be installed after a concrete base is poured, Charleston Director of Public Art Jeff Pierson said.

Jeff Fetty, an artist from Spencer, designed and created the red ribbon sculpture. He said his design is simplistic yet powerful, and he hopes it will serve as a reminder of why community is so important in times of crisis.

“My hope is for the visitor or the viewer to be reminded of what a terrible disease this has been,” Fetty said. “I hope it serves the viewer knowing that their community cares about them and what they have been through. You’re not alone in our community. We care about you.”

Pierson, who has headed the Charleston public art office since its creation in 2017, lost his uncle to AIDS in 1995. He taught Pierson how to draw as a child, and supported his art career until the day he died.

“I lived the [AIDS epidemic] through the eyes of my uncle as a teenager, watching that fear of that community of people that didn’t know what was happening,” Pierson said. “In March, it reminded me of that. I’m not seeing it firsthand, like they did, but I was a witness to that as a kid, basically.”

How nearly every American felt in the spring — trying like hell to know the unknown — was similar to how only a certain population felt in the early days of the AIDS epidemic, he said.

“The fear of the unknown — what are the symptoms, how do you get it, how do you cure it — those were all question marks,” Pierson said, “and we’re in the same place now.”

Charleston’s public art scene has stayed integral to the city for decades, and Pierson said he believes the renovations will revive the meaning behind the memorial garden.

“It’s going to be a presence in the garden, and my hope is it’s going to redefine the entire space,” he said. “I wouldn’t say it if I didn’t believe public art can really make those changes. We’ve seen it in Charleston time and time again.”

Also coming to the garden: a sound system broadcasting classical music 24/7, bench and table repairs, additional fencing, new flowers and new sod installation. The garden’s board launched a GoFundMe for the renovations, with almost $1,000 in donations received already.

The pandemic also “lit a fire under myself” and documentary co-director Zach Labin, Banks said, to finish the film in 2020. It was commissioned before the coronavirus pandemic, but the similarities between now and then drove the two to deliver the final product.

As someone who’s lived with the disease and continues to fight, Banks said his advice to others dealing with COVID-19 is to lean on one another.

“The thing I share most with people is to share [feelings] with others, because that was the only thing that got us through the early days of the AIDS crisis — it was being there for each other,” Banks said. “We didn’t have a lot of hope, but what we could do was, we could be there and share the pain that other people had and hopefully make it a little bit less.”

“Living” defines the memorial garden. When Huff, Maxwell and Severino founded the small sliver of land nearly 21 years ago, its purpose was to serve the living — those living with the disease and those living with loved ones killed by it.

“AIDS at this time is not a death sentence,” Maxwell said. “It’s something you can control, if you take the medicine.”

The memorial garden always has been, and will always be, for the living, he said.

“I want people to be able to know that, when they enter that garden, that it’s not just to remember, but it’s also for the living,” Banks said. “The garden is evolving, and the meaning of the garden is evolving. I think COVID-19 helps us understand that.”