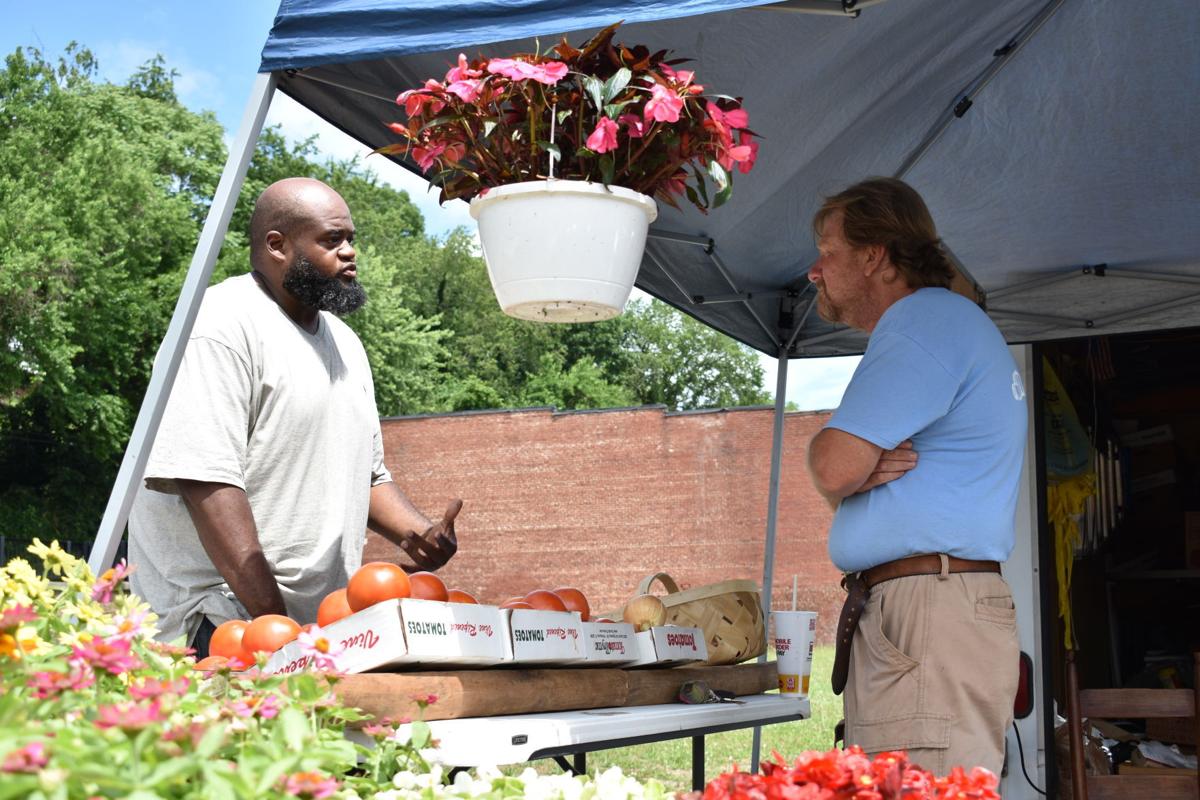 Larry Moore (left) speaks to Keith Parsons on Thursday about where local produce and flower sellers can operate in the West Side when a new park is built. 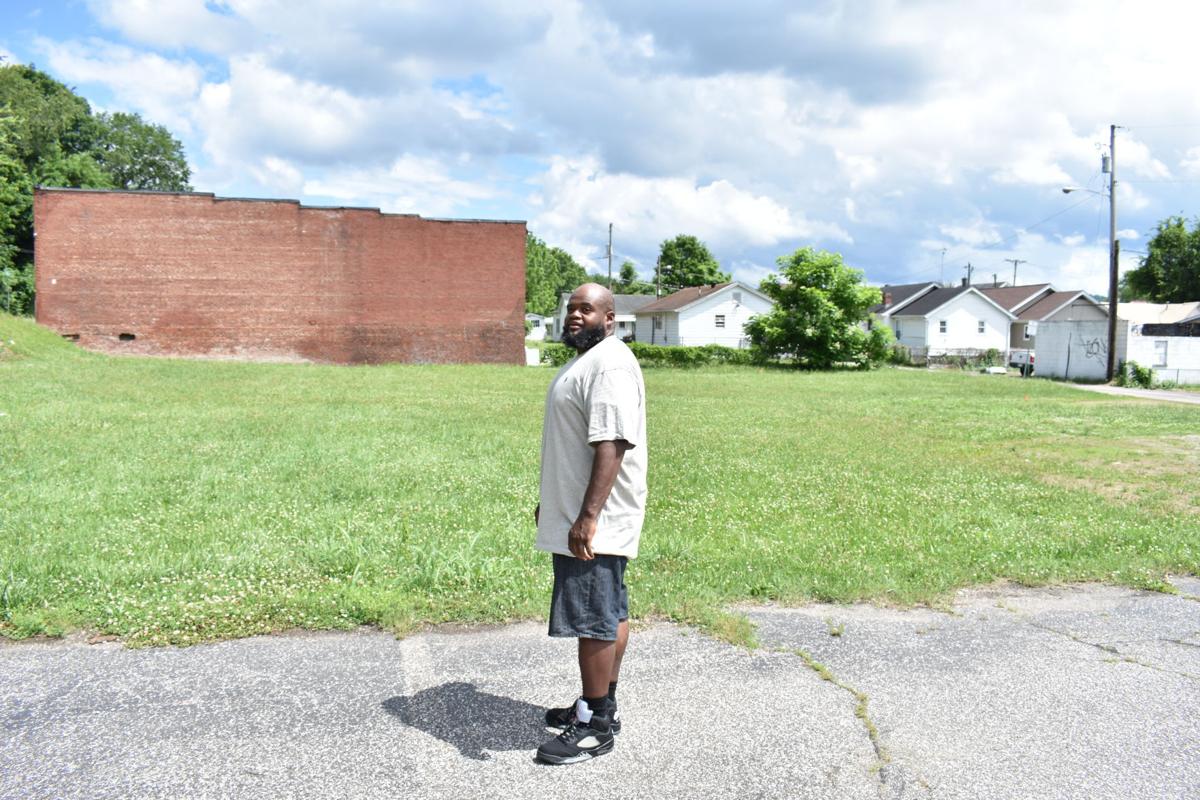 Moore, the city’s newest councilman, stands in the vacant lot on Beatrice Street where a new park will be installed

Larry Moore (left) speaks to Keith Parsons on Thursday about where local produce and flower sellers can operate in the West Side when a new park is built.

Moore, the city’s newest councilman, stands in the vacant lot on Beatrice Street where a new park will be installed

Moore is a special education teacher at Capital High School, where he is also a football and track coach. He is a Glenwood Elementary, Stonewall Jackson Middle and Capital alumnus, holding degrees from Marshall and West Virginia State universities.

Born and raised on the West Side, Moore said he’s ready to carry the torch for Wesley-Plear. He said his lifelong friend made significant progress in her nearly two-and-a-half years on the council responding to systemic and everyday problems in the neighborhood.

Wesley-Plear was elected after longtime West Side Councilman James Ealy chose not to seek another term because of health reasons. Moore will finish Wesley-Plear’s term, which ends in January 2023.

“I mean, Tiffany did so much,” Moore said. “She’s one of the best people you could have as a councilwoman. She was on it.”

When Wesley-Plear asked Moore if he would accept her nomination, Moore said he worried it could hinder his work in the community. He quickly decided the decision was a no-brainer. This was a platform to make voices heard.

During her final council meeting, Wesley-Plear thanked her constituents for trusting her with the office and said they would be in good hands.

“If you’re a kid or adult on the West Side, you’ve seen him, you know him, you may not know him by name or you may just know him as Big L,” Wesley-Plear said, “but he’s always giving some kid a ride or getting them something to eat or just being a true advocate for the West Side through and through.”

Moore’s nomination wasn’t scheduled to be voted on Monday night, he said, until Mayor Amy Shuler Goodwin called him while he was leaving track practice that afternoon. He would be voted on, and if approved, be seated at Wesley-Plear’s empty desk and going to work immediately.

“It was a crazy day because I had workouts to do for the football kids, I had to go home, take a shower and get to City Hall,” Moore said. “It was almost like a comedy skit. I’m running crazy and stuff, calling people up like, ‘Hey, what you doing today? Come see me get sworn in.’”

Moore will serve the people who live between Kanawha Boulevard, Patrick Street, Glenwood Avenue and Washington Street West. His ward also stretches west beyond the Elk Two Mile Creek to School Street and east to blocks of Park Avenue. Moore said his goal is to help the city change beyond these lines.

“This is my area, but I don’t want to get stuck into being ‘I’m just a Ward 4 guy,’” Moore said. “Everything I do is really for the West Side and for the whole city.”

First on the new councilman’s to-do list: hit the streets.

“I believe in getting back into the old school days of going out and having a meet-and-greet with people, because you’re going to have to,” Moore said. “A lot of people who’ve been living here for years — like 40, 50, 60 years living in the neighborhood — and a lot of the time they don’t really get heard.”

Older residents aren’t often on social media, Moore said, so the only way to truly understand their perspectives is by knocking on their doors.

The West Side is also home to a large population of children and young adults. Moore works for Keep Your Faith Corporation, a local nonprofit group founded in 2006 by his longtime friend Dural Miller. The organization began as a literacy-focused volunteer group primarily serving children, but it also serves adults.

Keep Your Faith works to get children the experience, resources and skills they need to live a good life, Moore said.

“It helps our kids, getting them at an early age and showing them different parts of life and what to do and how to do it,” he said. “Some of these kids are real brilliant kids, [but] there are a lot of things that you need to be shown to help grow in life.”

He cited the lack of people on the West Side owning their homes. He said he wants to work to ensure people have the chance to move beyond rental housing.

“When you own something, you take more pride in it because it’s yours,” Moore said.

The City Council on Monday voted to apply for a grant from the Greater Kanawha Valley Foundation to partially fund what would be the West Side flats’ only park. Goodwin said the park would feature two basketball courts and a play area, possibly some chess tables, and be located at the corner of Beatrice Street and Washington Street West in a corner of Moore’s Ward 4.

Walking with a reporter Thursday on the vacant lot where the park would be built, Moore spoke to a couple who sells fresh produce and flowers there. They likely be moved off by the park. Moore told them he’s going to work to create a farmer’s market-style space on the West Side.

Whether there’s a need for children’s literacy, urban agriculture, workforce training or new city parks, Moore said, he sees everything connect to the same few issues. He sees how one decision affects another and the people it helps and hurts. He pledged to his new constituents that he’s going to fight to restore the neighborhood’s reputation as a home for all.