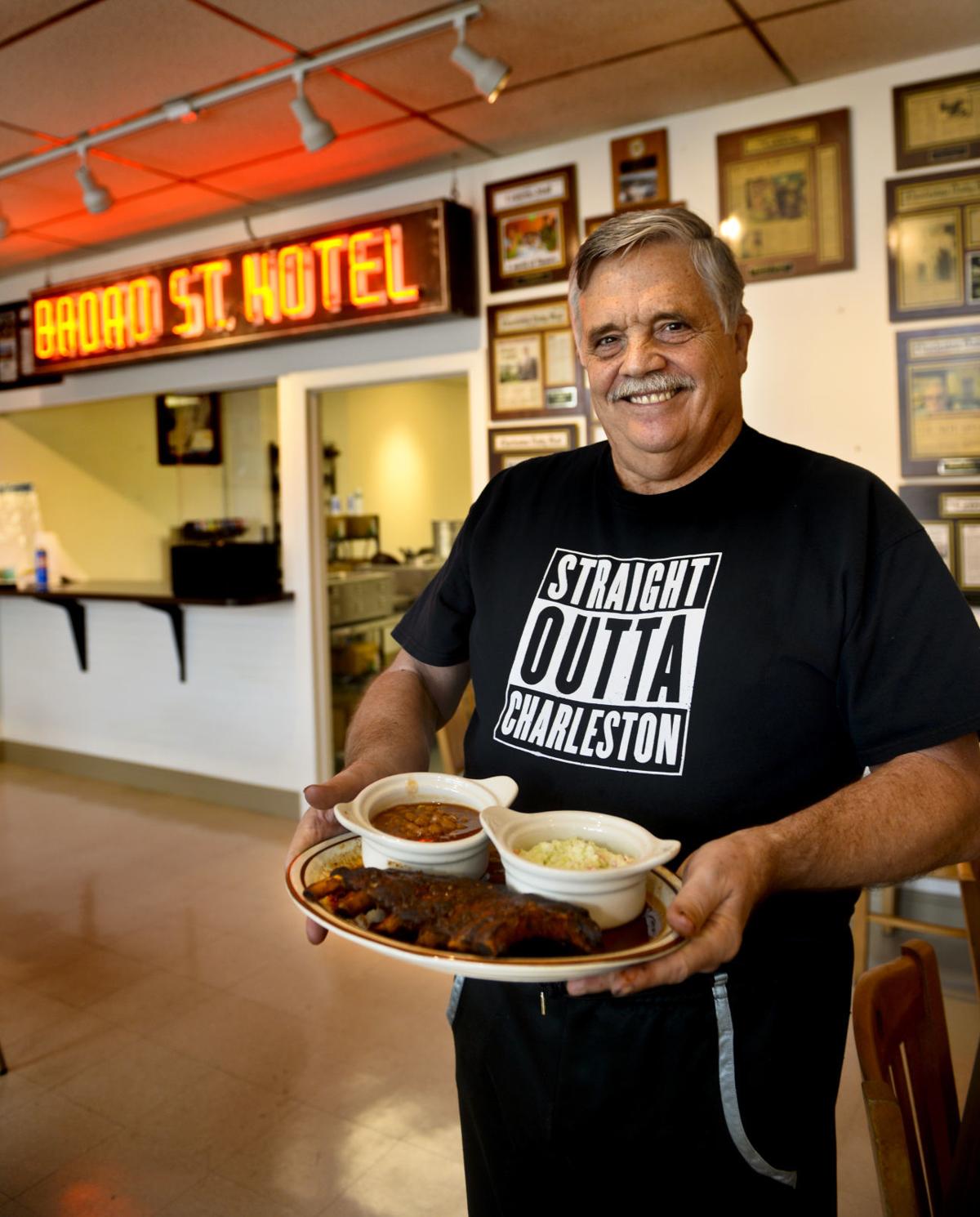 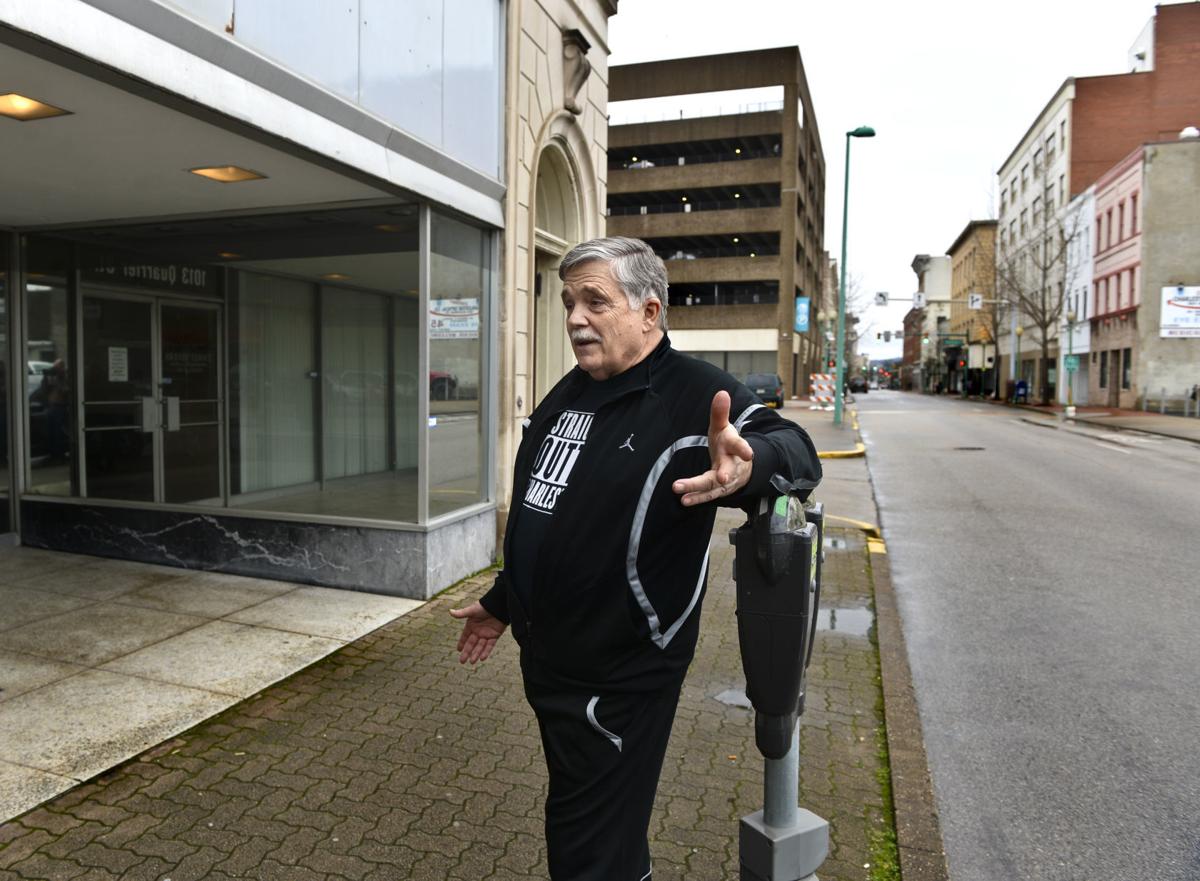 Danny Jones reminisces about the way Quarrier Street was when he was younger. 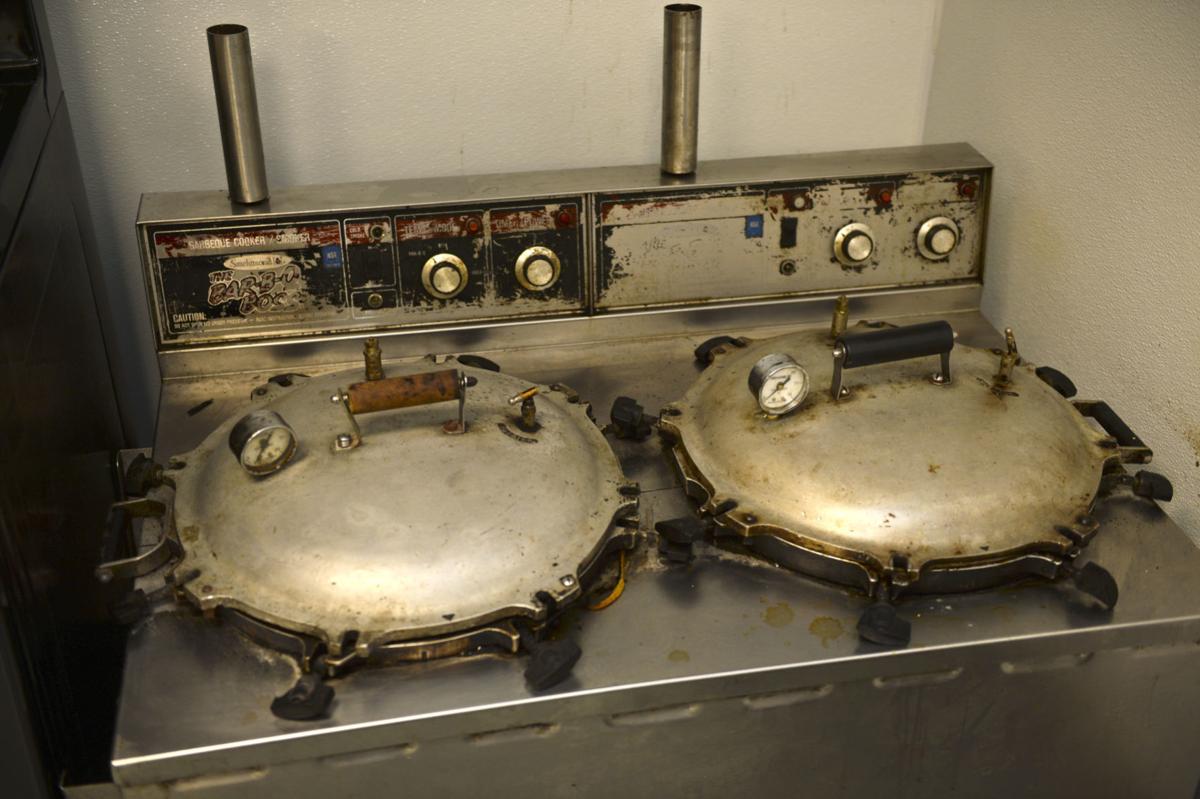 Jones uses a 30-year-old BBQ cooker and smoker to prepare his meat. 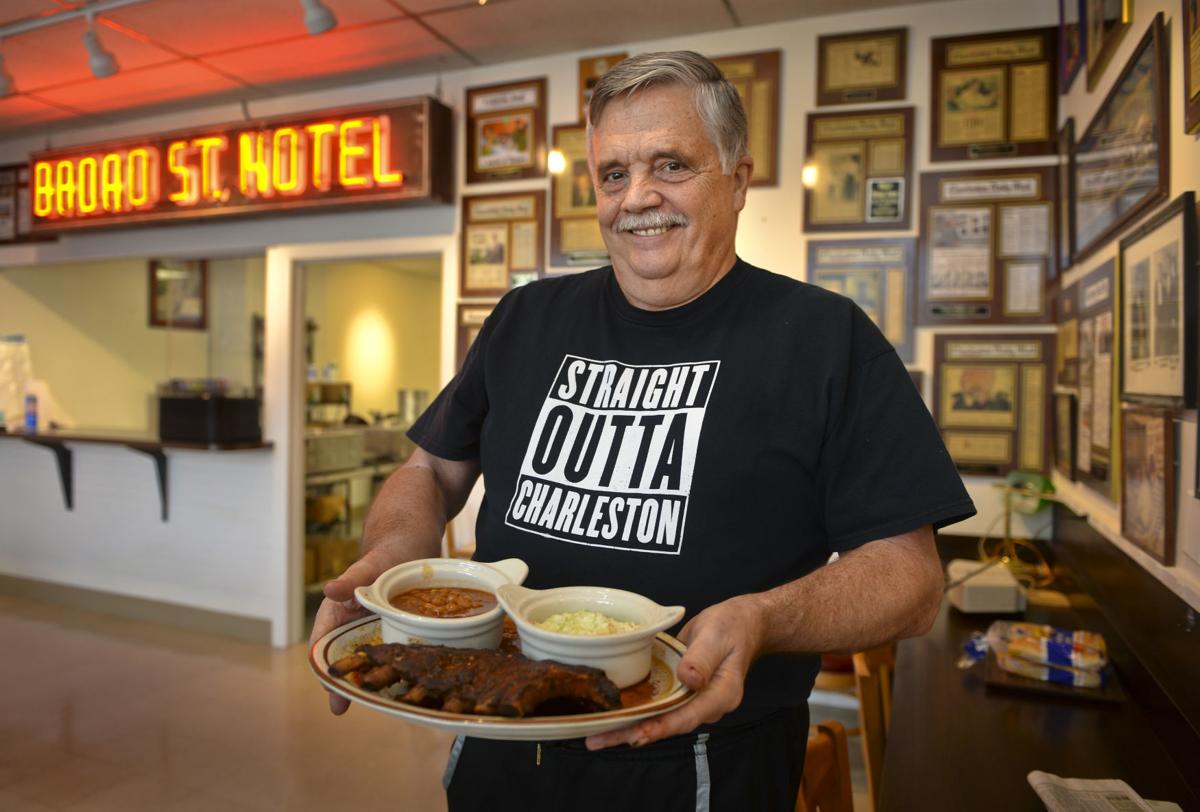 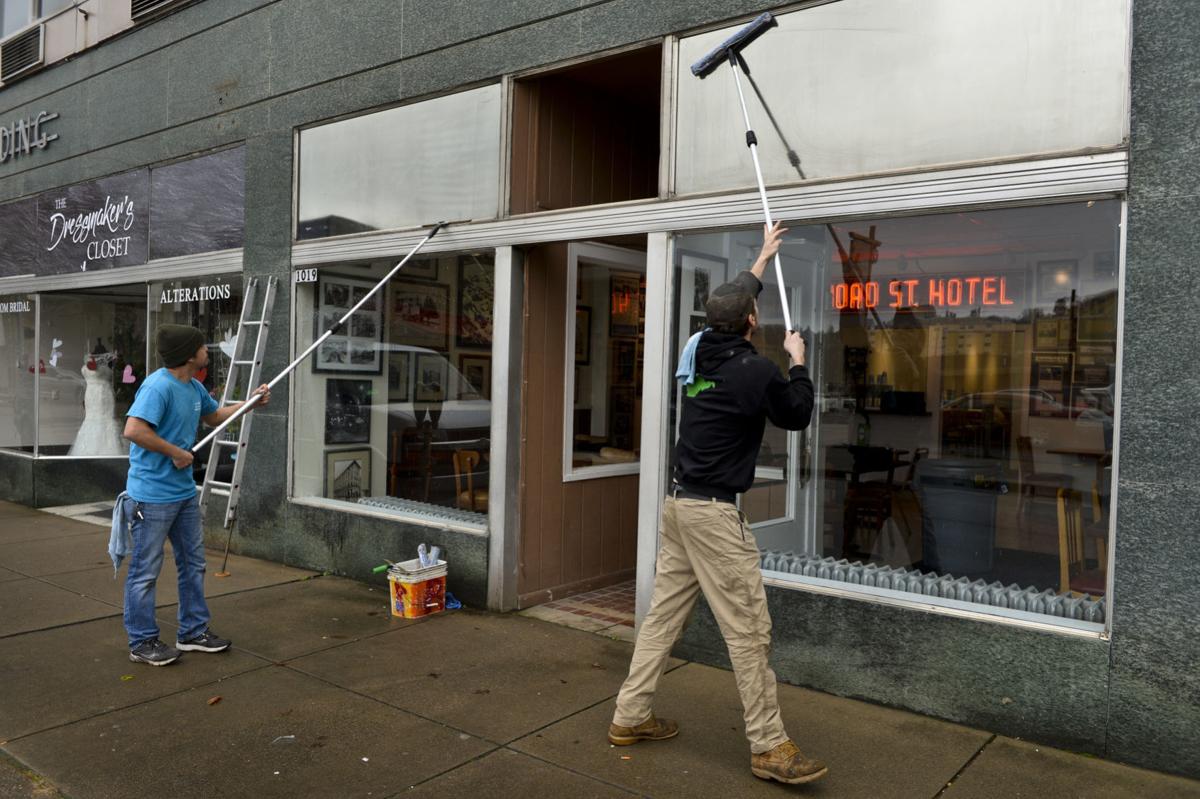 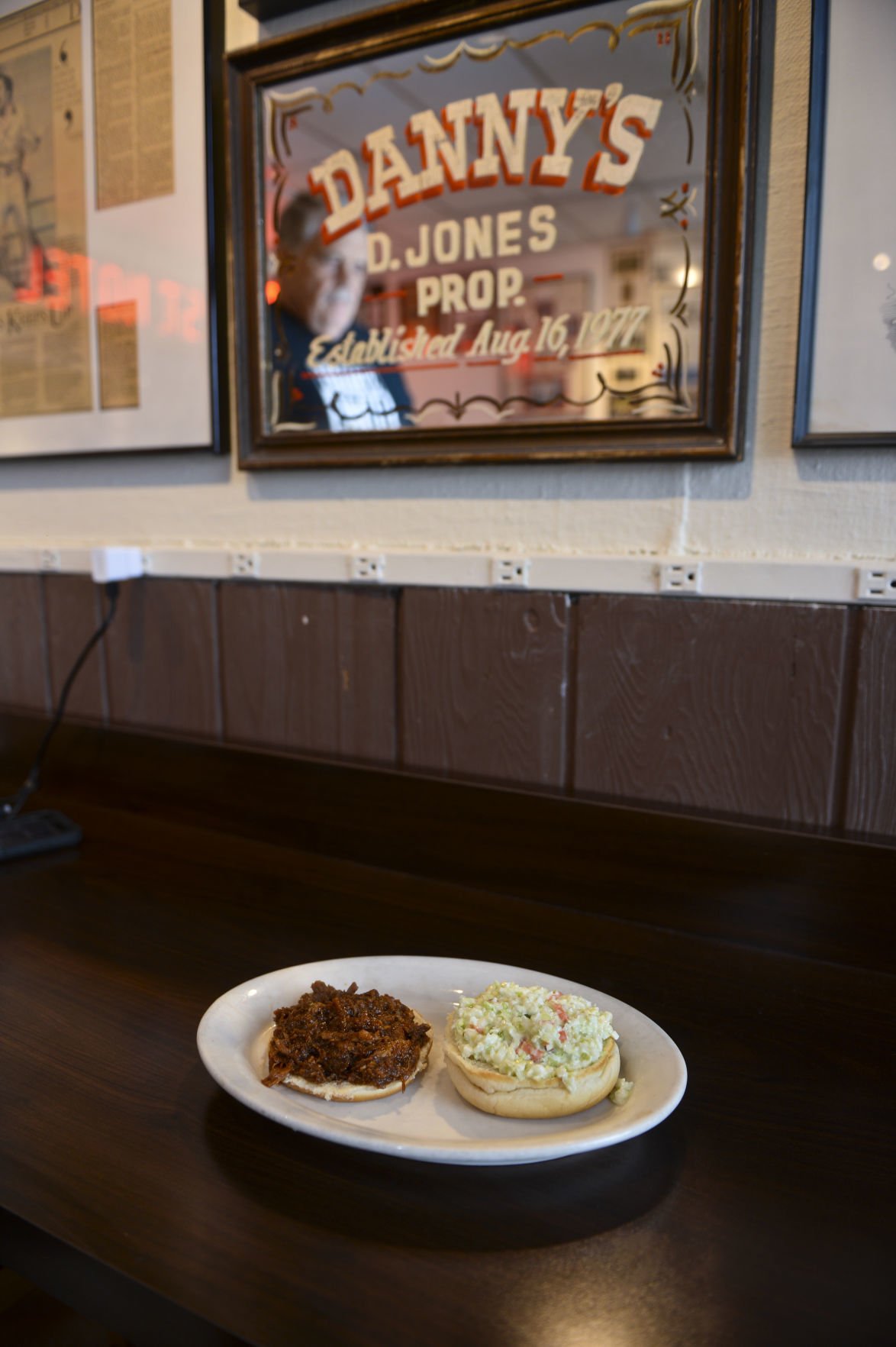 A barbecue sandwich will be on the menu at Danny Jones' new restaurant. 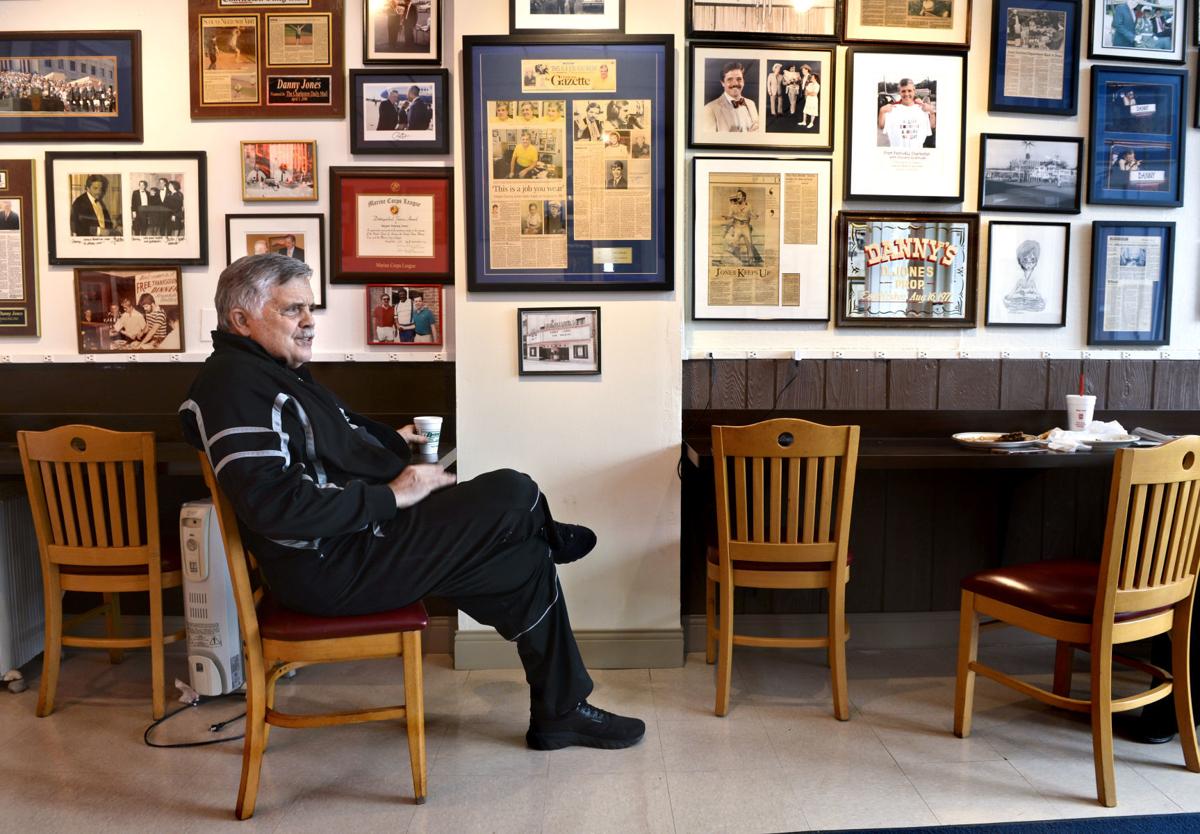 Danny Jones reminisces about the way Quarrier Street was when he was younger.

Jones uses a 30-year-old BBQ cooker and smoker to prepare his meat.

A barbecue sandwich will be on the menu at Danny Jones' new restaurant.

Danny Jones has had a hard time sleeping lately.

Sitting in the front room of his space at 1019 Quarrier St., tucked between a few nondescript storefronts, the former Charleston mayor straightened a vintage photo of the city from back in the day, rubbed his weary eyes and gestured around the room.

“I was down here smokin’ meat at 1:30 this morning,” he said last week. “I can’t sleep, so I smoked some barbecue.

“Can’t sleep ’cause I’m thinking about this place.”

He paused, trying to find the words to explain the insomnia.

“It’s kinda like doing theater. I’m just getting into character.”

The curtain opens on his newest venture — Danny’s BBQ Stand — Wednesday. For now, at least, there’s a single act: lunch, and only lunch. The place will be open weekdays from 11 a.m. to 2 p.m.

There’s an old Broad Street Hotel sign at the counter, and seats for 35. Covering every available bit of space on the walls are photos and articles, a “Who’s Who”-style tribute to the peaks and valleys of his life.

He reads from an editorial from the Gazette-Mail: “Words like colorful and maverick have been used over the years to describe Jones ...” and goes off on a mini-rant. Then it’s back to the urgent matter at hand: his food.

He’ll be making chili and a “really good” creamy, smoked chicken noodle soup. But he fully expects the ribs to steal the spotlight.

“When you see the bones, that’s when they’re ready to fall off,” he said. “You don’t need a knife to cut my ribs.”

He grabbed a fork and a rack of steaming baby backs to prove his point.

“Watch me do this,” he ordered, and slid the tines through the tender meat until the first juicy bite gently fell to the plate.

“That’s what I’m talking about right there,” he said, triumphantly.

Clearly, this is not his first rodeo.

Danny’s BBQ Stand is the latest chapter of an unlikely career that began when Jones was a teen working as a line cook and bartender in the late, late night and early morning hours on the streets of Charleston.

“I was in the game at 15,” working at the old Sterling restaurant, he said.

“I got off at 6 o’clock [in the morning] and walked by the Roaring 20s once. … There’s still people up there drinking. Because there was no regulation. It’s all illegal. Making it legal finally put the Sterling out of business, I think, because we thrived off that subculture, that underbelly of Charleston.”

He pauses, lost in a memory or two, and finally grins. “It was great.”

Following military service in Vietnam, a long year in college and a handful of modest jobs, Jones went from serving the public on plates and trays to a very different kind of public service.

After a stint as Kanawha County Sheriff, two years in the state House of Delegates and a gig as a radio talk show host, Jones was elected to an unprecedented four terms as the Capitol City mayor.

“And then I had 205 Capitol Street. I had the old Muldoon’s location for 18 months. I had my restaurant in Nitro, Danny’s Rib House in Nitro, for four years. Very successful place. Then I had Danny’s at Coonskin for a year.”

Running a restaurant is, he admits, a lot of hard work.

The question is, why now?

Approaching 70, he’s been out of office for just over a year. He loves his sons; the younger two are still in school, and the oldest is finding his own path — at least, that’s the hope.

“About half the time he’s in the penitentiary and that’s unfortunate,” Jones said. “He was in a year-and-a-half and he got out in August, and 10 days later he’s passed out in a parking lot with a needle in his arm. Almost died.”

Meanwhile, Jones said he’s “tired of Dr. Phil” and not inclined to travel the world or join coffee groups. He’s just not ready for retirement.

He half laughs, half spits at the idea the new place could make him a little cash.

“Money?” he scoffs. “This is a quote — If this place shows a profit, I’ll demand a recount.”

Sure, he’d love to pay off the equipment he’s bought, but it won’t affect his lifestyle either way.

“I just felt like there was something missing from my life,” Jones said.

Turns out, the former mayor has a vision. A couple of visions, actually.

It began with a quote from Morgan Freeman in “Shawshank Redemption.”

“Get busy living, or get busy dyin’,” Jones said.

That quote was in the back of his mind somewhere when he rented the space on Quarrier Street. Ostensibly, he wanted a place downtown to meet people. But it was hard not to compare Quarrier Street today with the hustling, bustling days of its vibrant past.

“Quarrier was an exciting street. Quarrier had the Hub Pool Room, had these three hotels,” he said, pointing just across the street from his barbecue spot. “There was a lot of traffic.”

The space he’d rented was too quiet. But slowly, between those quiet walls, an idea began to take shape.

What if he could somehow bring that traffic back?

He nodded in the direction of a nearby shop.

“Dressmaker’s has a few people every day. Maybe one of them will shop here. Maybe somebody here will shop there,” he said. “Then you add one more. And there’s people in this place. And this place. Pretty soon, everybody’s going everywhere. That’s how you create traffic.”

Gradually, what he calls his “little anchor” theory began to take root.

He nods in the direction of the Charleston Town Center mall, which opened in 1983.

“They had four anchors. Now they have one. I wanna be a little anchor. On this street we need little anchors. I think it will help the city,” Jones said.

And just like that, the two most strikingly divergent, polar opposite aspects of his life came together.

“I have been involved in public service a good portion of my life, and I think this may be part of that,” he said.

Opening a little barbecue joint on a street that could be busier is his vision of a contribution to a greater good. He can see it all so clearly.

“There’s some storefronts empty on that block of Quarrier Street. And it’s really sad, you know?” he said. “There’s one, two, three, four empty slots. If you can get somebody to just come in there, give ’em that place for a while. We could have little anchors all up and down this street. That’s where we’re going to bring this town back.”

But there’s more to this vision.

Jones understands the challenges of addiction — and recovery — in a way that non-addicts cannot.

He remembers his days of more-than-heavy drinking, and how many times he saw the movie “Clean and Sober” before he was ready to be clean and sober himself.

He remembers the days of going from meeting to meeting, just trying to “stay sober between the meetings,” he said.

Now, with his city in the throes of an addiction crisis, his son a struggling addict and no easy answers on either front, Jones said he hopes to someday hire a few determined folks in the midst of their own recoveries.

“I’m a 12-stepper. I’ve given talks down at Recovery Point. I’m not some big liberal, but I’m willing to take a shot at it,” he said.

“I figure, you try a couple. What if you try one and they worked out for three months? Try another one. Maybe they get hooked on a different lifestyle.”

Whoever he hires, make no mistake — this is a one-man show.

“There’s nobody that’ll make ribs like I do. Or barbecue sandwiches. Or soups,” said Jones. “I’m gonna have salads like I used to make, with smoked chicken on ’em.”

He steams and smokes the ribs at the same time. He makes his own coleslaw and barbecue sauce, too — went through nine gallons a day, he said, at his old rib place in Nitro.

There’s a chance he protects his recipes more closely than some government secrets. He all but choked at the suggestion that his croutons might come from a box.

The croutons, apparently, are a point of pride.

“I’m telling you. My ex-wife — we get along very well — she took a bite of those croutons and she said, ‘This is a game changer.’”

Years ago, someone came up with catchy ad slogans for his restaurants that he remembers to this day.

If he goes that route again, Jones said he already knows the phrase he wants to use.

“The place to eat’s on Quarrier Street,” he said with a bit of glee.

“My place is gonna bring some traffic. I always did,” he said. “People lined up the stairs at Number 8 to eat our food, myself and Otis Laury. They lined out the door at Lee Street.

“The question is, will they line out the door here?”