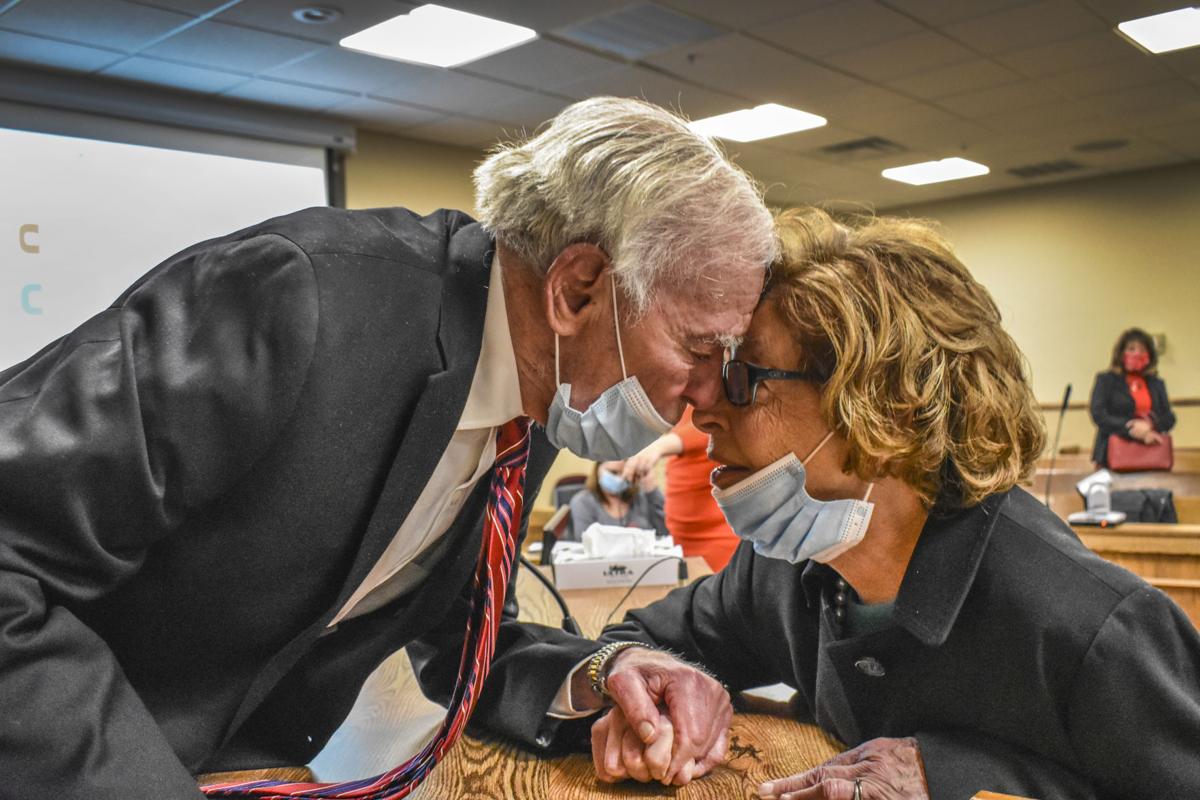 Hoppy Shores and his wife, Bronson, lean in to kiss each other following Shores’ final Kanawha Commission meeting Dec. 17. Shores served on the commission for 42 years, declining to seek an eighth term in office 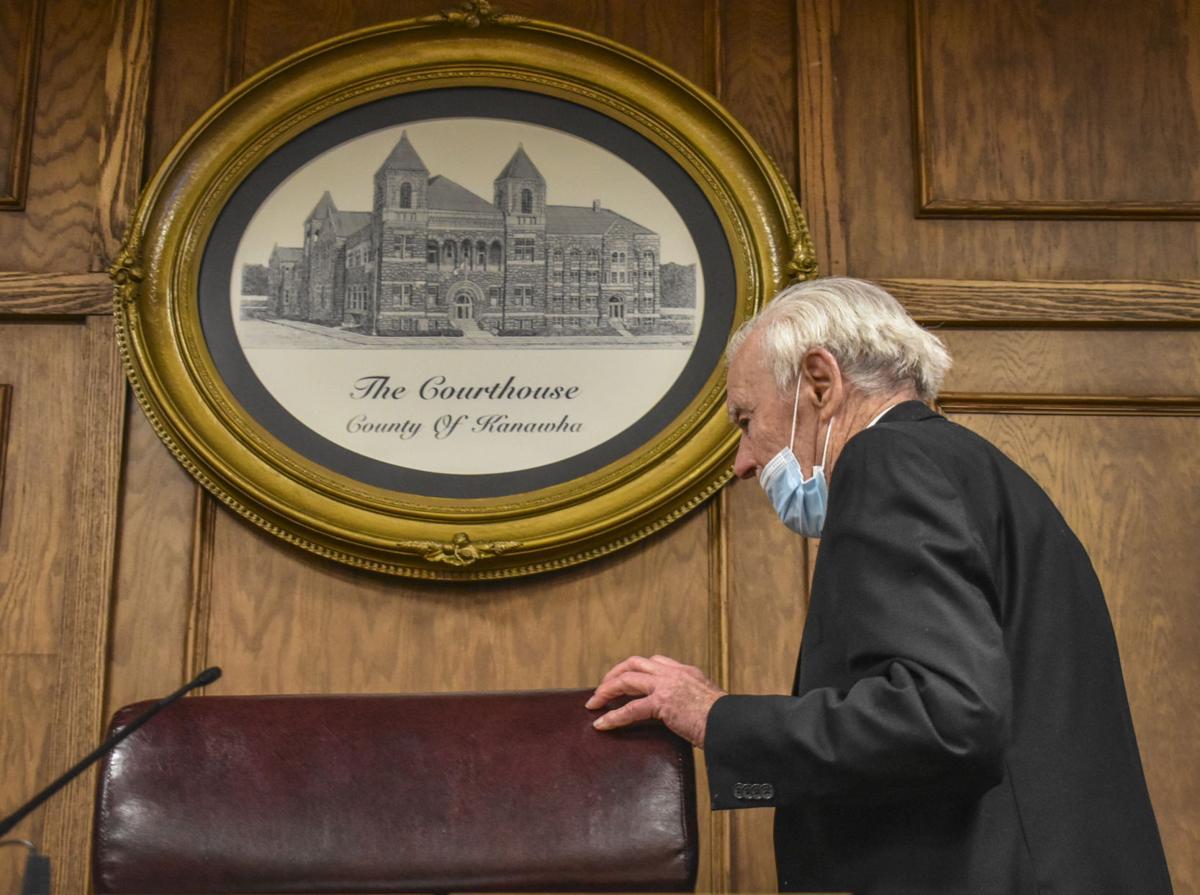 Shores exits the Kanawha Commission Courtoom, which was named after him Aug. 10, one final time. 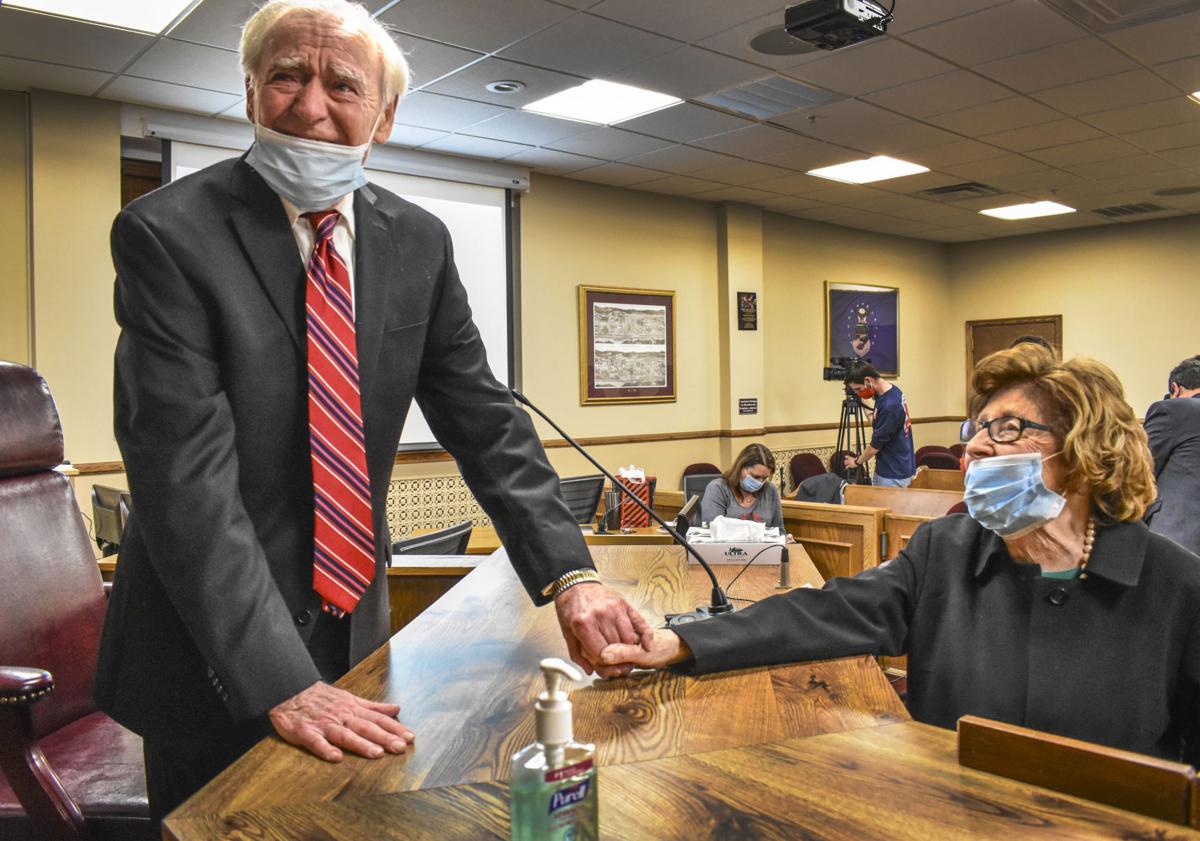 Shores and Bronson share a moment before leaving his final meeting. 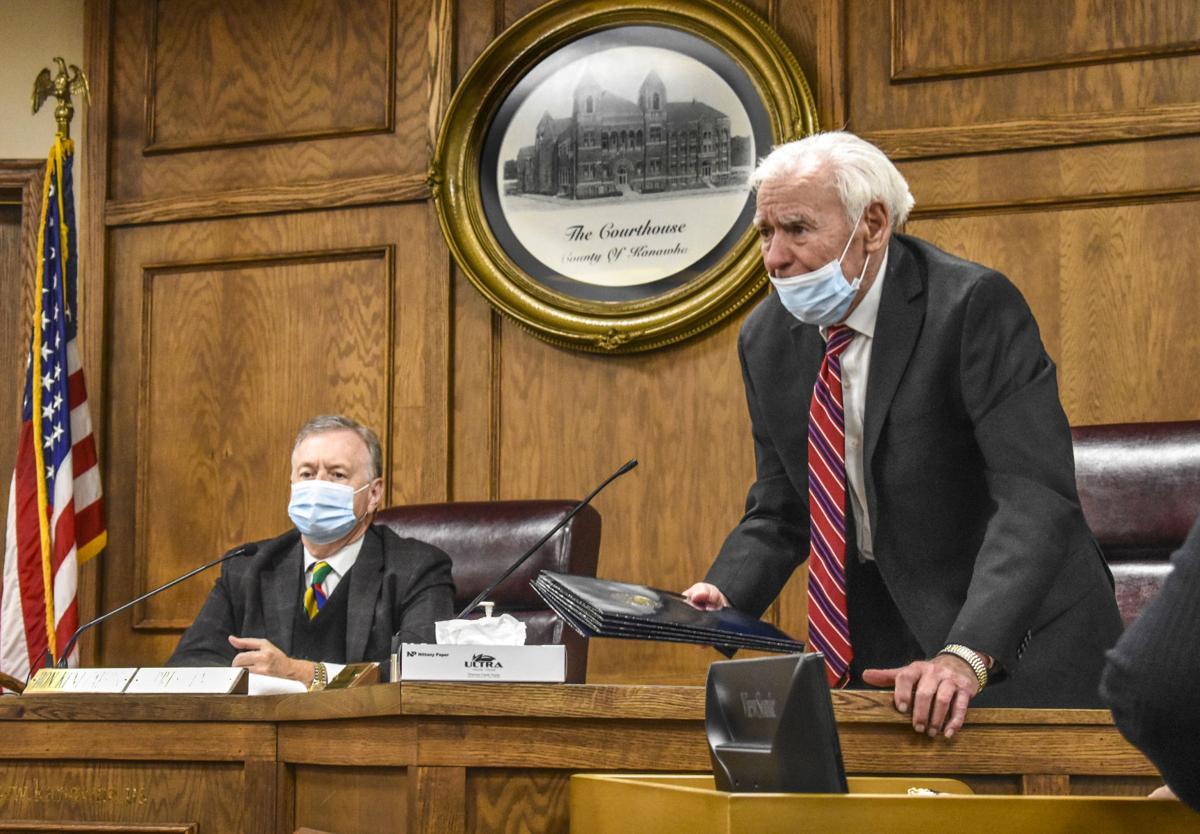 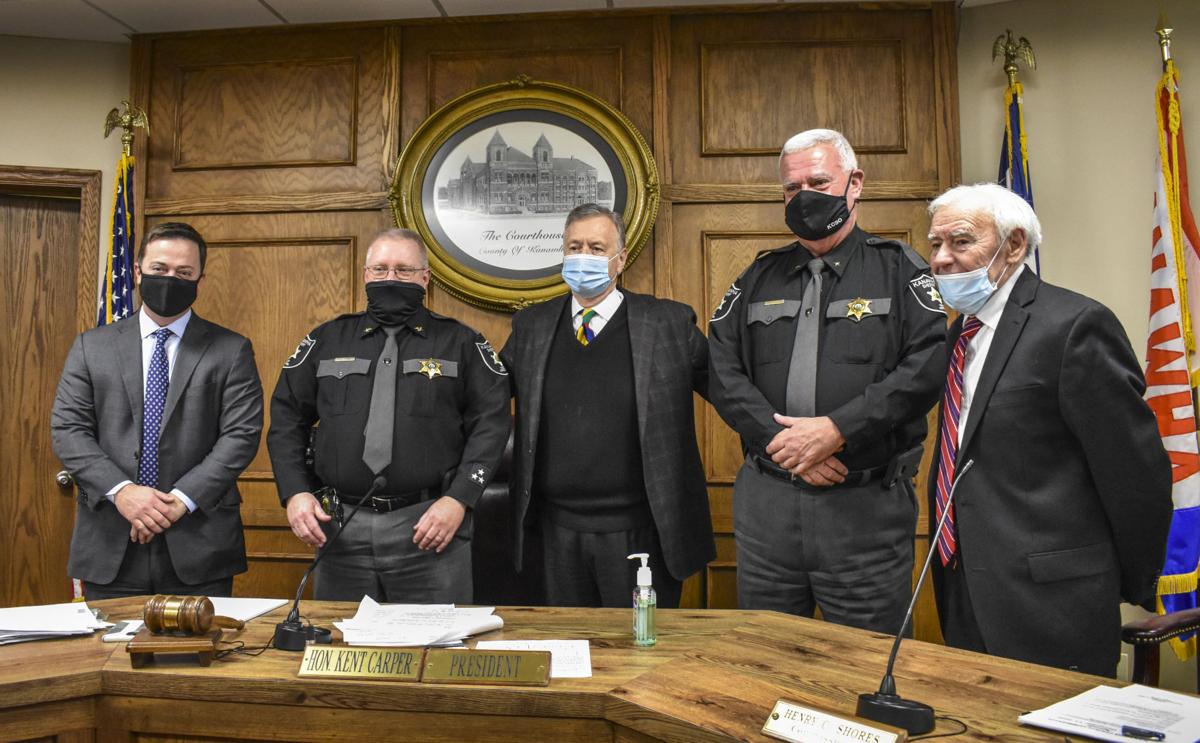 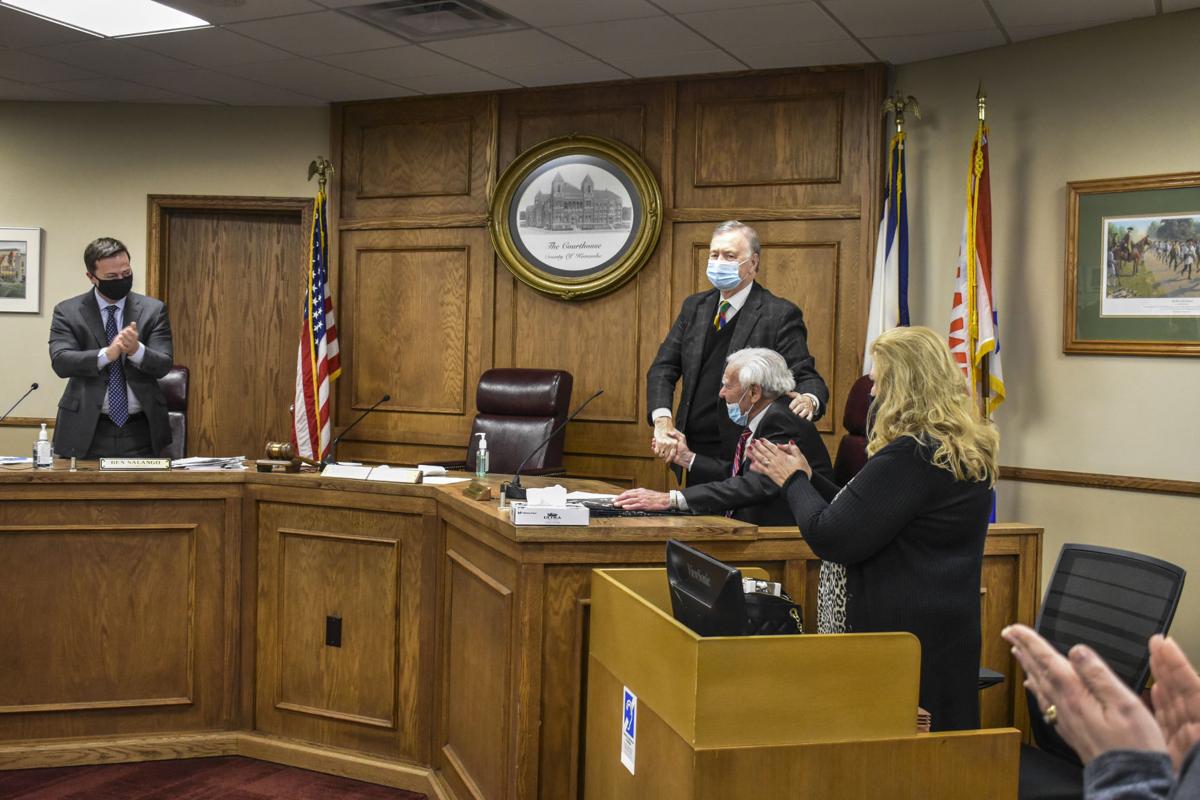 The commission courtroom holds a round of applause for Shores. Pictures is Salango, Carper, Shores and commission administrative assistant Leslie Koepsel.

Hoppy Shores and his wife, Bronson, lean in to kiss each other following Shores’ final Kanawha Commission meeting Dec. 17. Shores served on the commission for 42 years, declining to seek an eighth term in office

Shores exits the Kanawha Commission Courtoom, which was named after him Aug. 10, one final time.

Shores and Bronson share a moment before leaving his final meeting.

The commission courtroom holds a round of applause for Shores. Pictures is Salango, Carper, Shores and commission administrative assistant Leslie Koepsel.

Henry C. “Hoppy” Shores walked out of the courtroom that bears his name one final time on Dec. 17, concluding his stint as the longest-serving Kanawha County Commissioner in history, with an unmatched record of public service.

For 42 years, Shores said, he’s had the best job in the world. The Kanawha County native will retire at 90 years old.

Shores was born in Dunbar during the Great Depression. He moved to Charleston’s West Side to live with his sister after his parents died when he was at a young age.

Shores was a sophomore running back on the 1947 Stonewall Jackson High School state champion football team. As a senior, Shores was awarded the Kennedy Award, given to the state’s top high school football player. He was the third-ever recipient of the award and the first from Charleston.

It was on the first day of high school when Shores met Bronson Garcelon, whom, six years later, he would marry. Shores said it was love at first sight, but that love had early restrictions.

“When I first met Bronson, I said, ‘This is a girl for me,’ but my coaches gave lectures about staying away from the girls, and my athletic career was important to me,” Shores said. “So it was a year and a half later that I first asked her for a date.”

Shores returned to Kanawha County after his service, turning to the insurance business. The company bearing his name still sits on Kanawha Boulevard.

Then, in 1966, prominent Charleston attorney Cleo Jones made a late-night phone call to Shores, telling him he should run for the Kanawha County Commission. According to newspaper archives, Jones finally urged Shores to join the race after two hours on the phone.

“The commissioners were fighting among themselves. It was like a power play, and I brought more of a feeling of cooperation and doing what was best for the county. I was new and owed no favors,” Shores said.

He said he made sure county resources were allocated to hardworking county employees.

“I also tried to treat the employees with respect, give raises when they deserved one and implement an insurance program for them,” Shores said.

Sen. Shelley Moore Capito, R-W.Va., honored Shores on the Senate floor Dec. 15, reading some of his life moments and career accomplishments into the Congressional Record. Capito said one of Shores’ early accomplishments was creating a program to get county employees free mammograms.

Shores served in the West Virginia House of Delegates from 1986 to 1990, before again running for the Kanawha County Commission. He was elected in 1991, and has held the seat since.

Commission President Kent Carper, who was elected to his seat in July 1996, remembers being asked by a Charleston Gazette reporter before his first meeting what it was going to be like serving alongside Shores.

“He was an icon. I called him the conscience of the county,” Carper said. “And that was 25 years ago.”

Carper recalled an alarming number of droughts in the late 1990s and early 2000s, which only furthered Shores’ push for expanding clean water access to every corner of the county. Clean water was a luxury many people in Kanawha County’s outer regions didn’t have; Shores said that was just unacceptable.

“Above all, the residents of this county deserved fresh water. A little at a time, we have been able — with the water company — to provide many of the outlying areas [with] fresh water,” Shores said. “What could be more important?”

Shores came to the rescue in 2006 when the miniature train that carried children and families around Coonskin Park to see holiday light displays could barely stay running. He secured funds to save the train, and it was renamed “Hoppy’s Little Express.”

During Shores’ final commission meeting on Dec. 17, community members who spoke to honor Shores often credited him for his love of helping children.

“I have always loved children. Seeing them happy is just important to me. That small play area at Coonskin, and now Shawnee, have brightened the day for a lot of children,” Shores said.

“Hoppy Shores knows what public service is all about,” Capito said on the Senate floor. “It’s about the children and providing a better future for all of those that we care about.”

Shores successfully lobbied to keep the 130th Airlift Wing of the West Virginia Air National Guard at Yeager Airport when the unit was set to be reassigned. He’s credited with keeping Yeager Airport afloat because of it.

He said the county must continue to support this kind of economic development to serve the citizens.

County Commissioner Ben Salango, who has served with Shores since 2017, said he admires Shores for his dedication to public service and overall kindness.

Carper said he’s been proud to serve alongside Shores for nearly a quarter-century, going through the good and bad. Even in the not-so-good moments, Shores’ true character always showed, Carper said.

“One thing about Hoppy, he’s an optimist,” Carper said. “He sees the good in people when, sometimes, you have to look real hard.”

When his father died, Carper said, Shores became his dad. And now that comforting and reassuring feeling Shores is famous for will be noticeably absent in the Henry C. “Hoppy” Shores Courtroom.

Shores said he takes great pride in the response to the COVID-19 pandemic by the Kanawha-Charleston Health Department, the ambulance authority and the rest of the county’s employees. Who on Earth could have predicted something like this, Shores asked, but he credits employees for answering the call to service.

“County government, I feel, is the closest government to the people. I hope my legacy is that I treated everyone fairly, helped maintain an honest, dedicated county government and met the needs of its citizens,” Shores said.

As for advice for future generations of commissioners, Shores said it’s all about having a real commitment to serving people.

“I think there is a larger picture we need to address,” he said. “Anticipate the future. Not be happy with the status quo. Join hands with all our partners.”