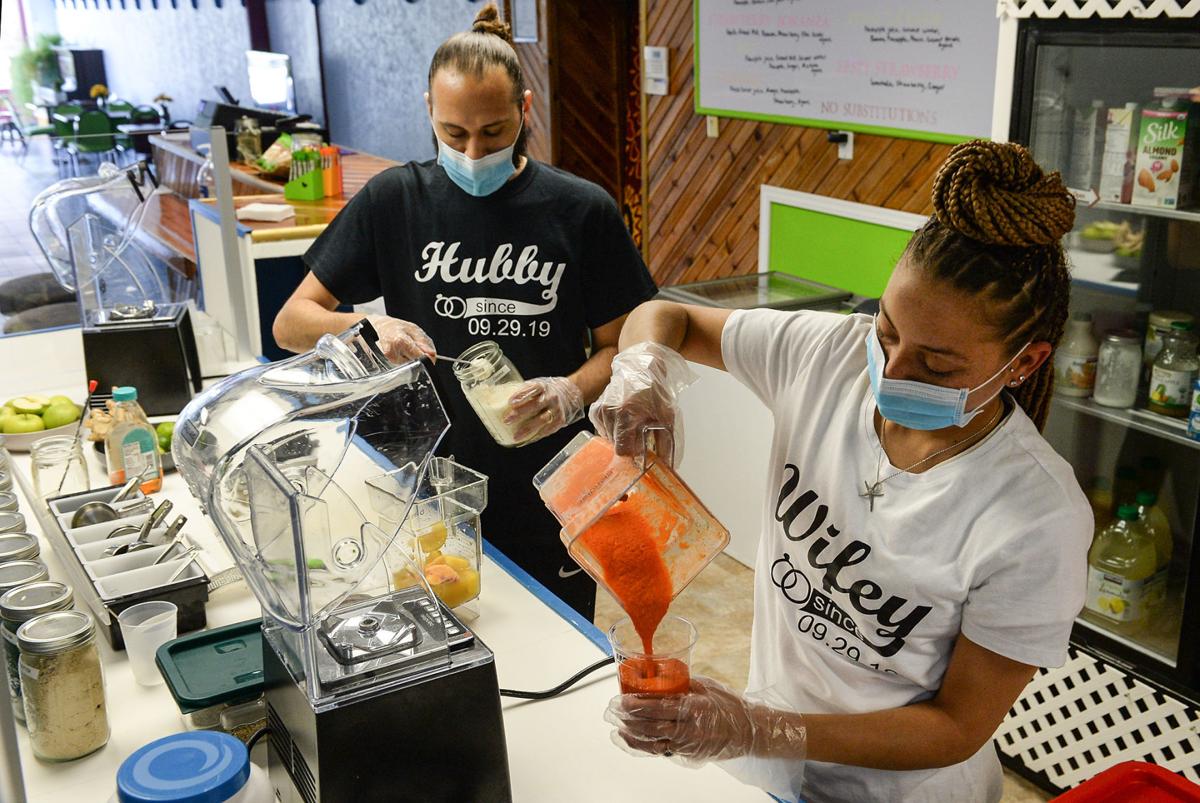 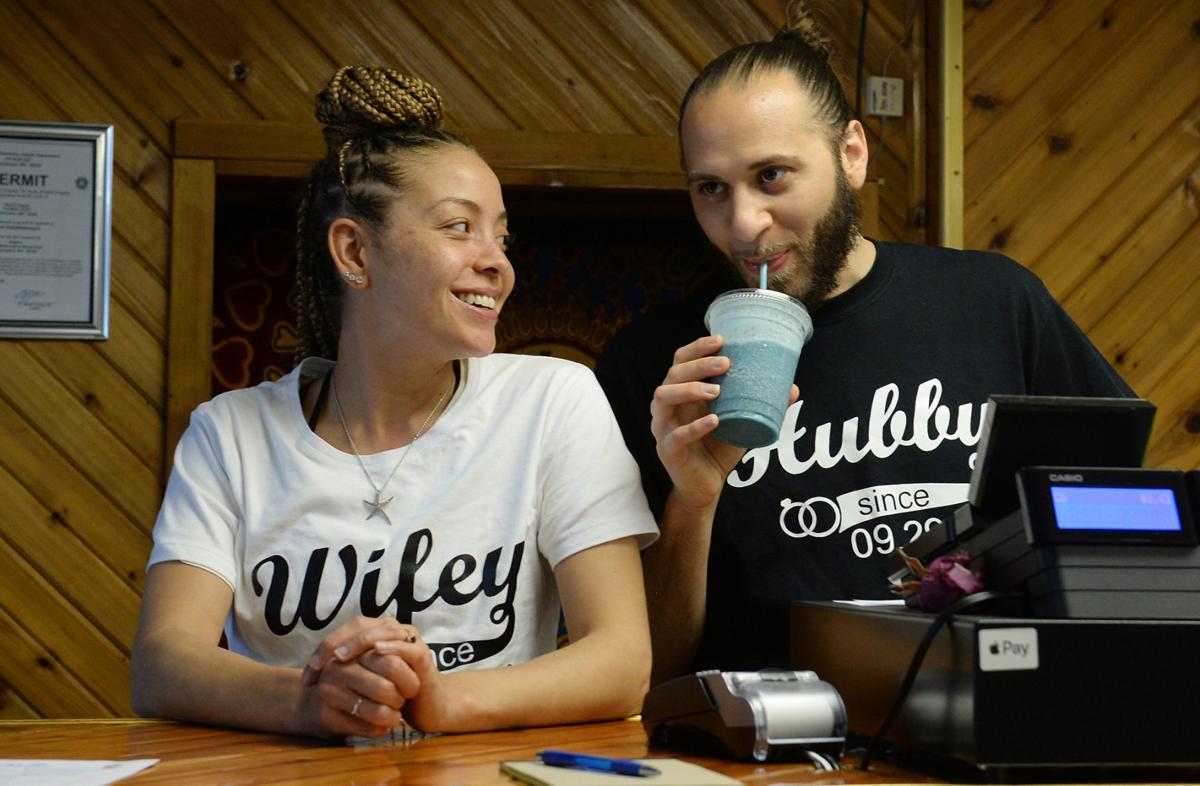 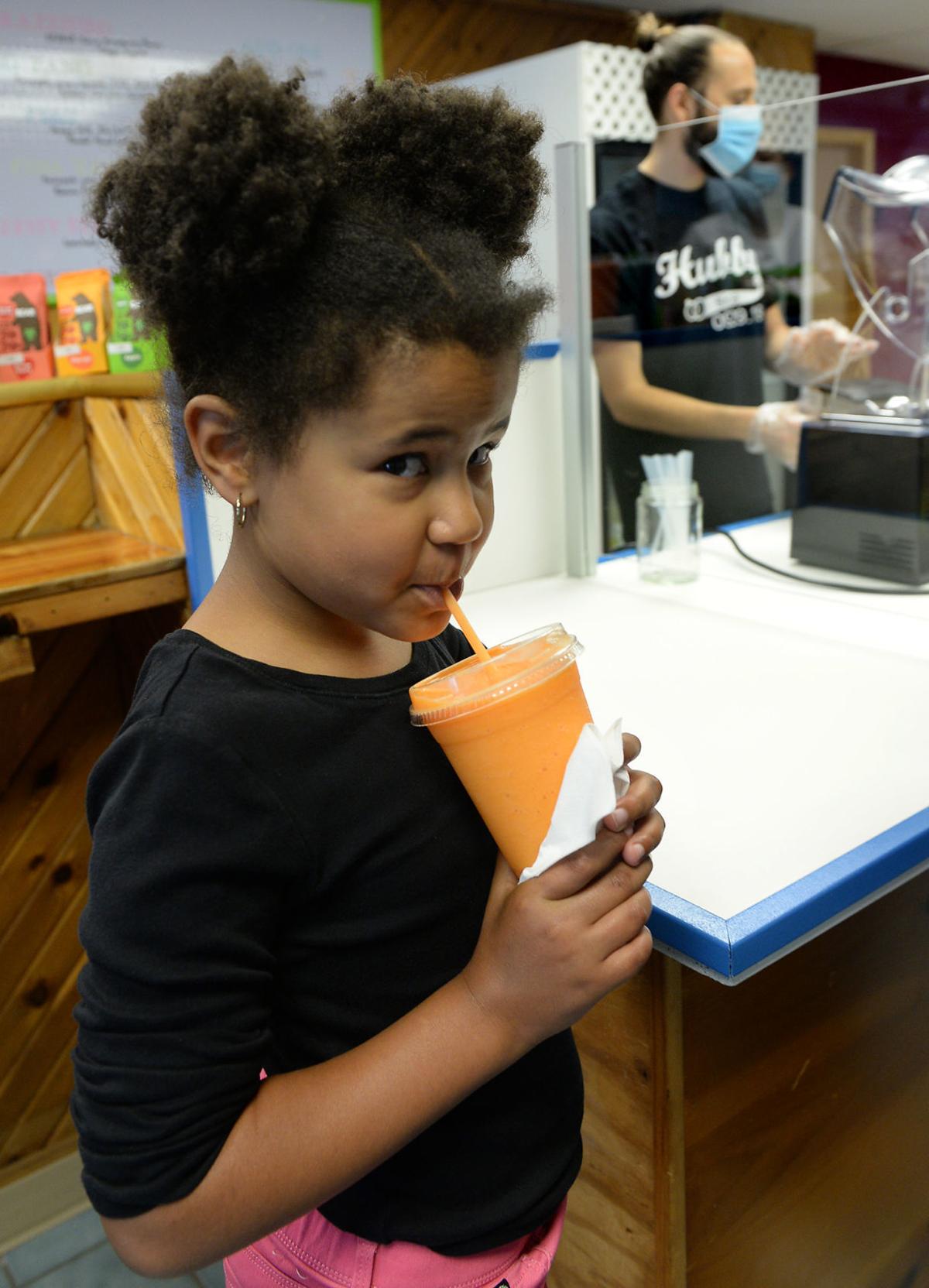 Jars of organic herbs and spices which can be added to the smoothies are seen at Zeganz. 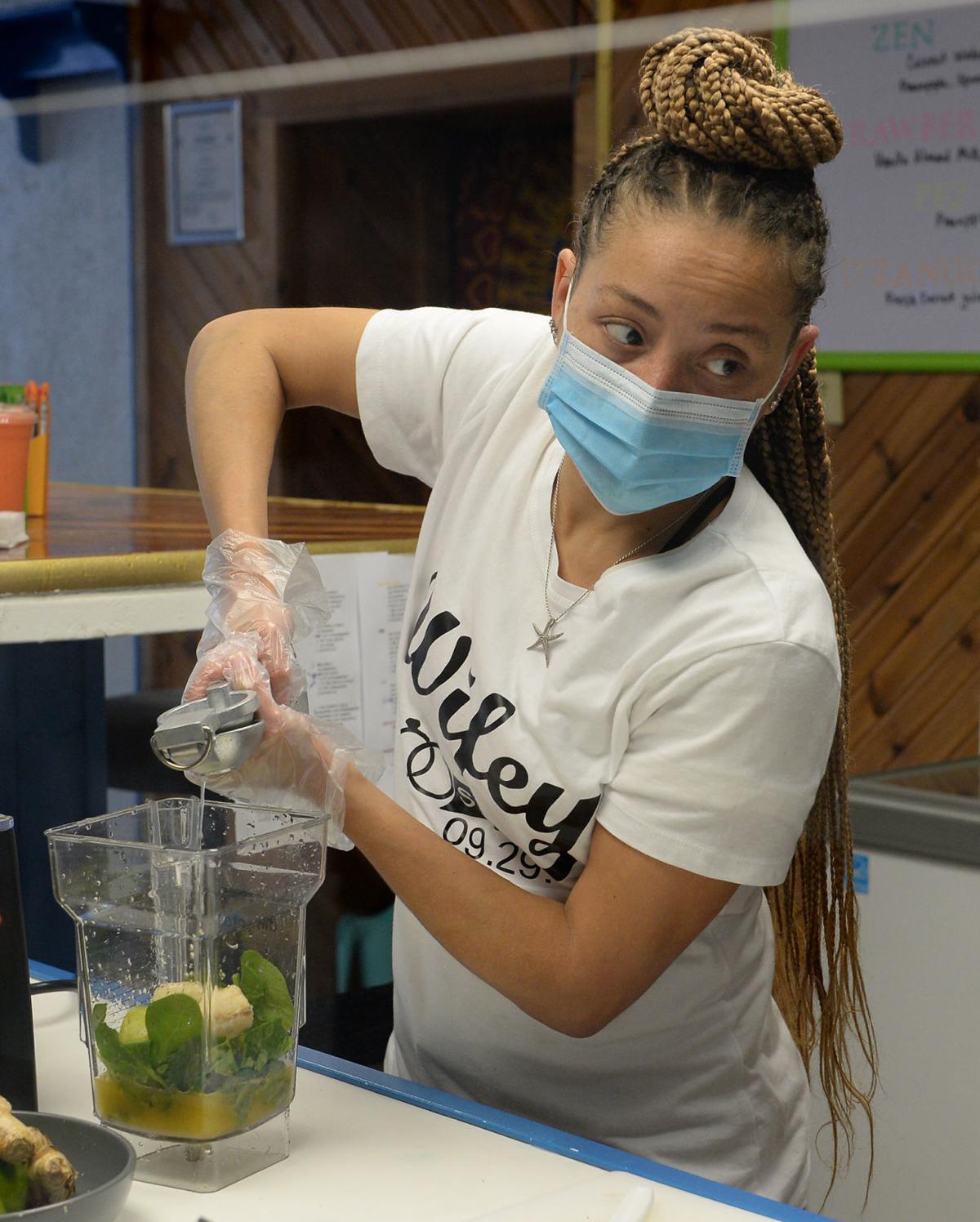 Alexis Zegeer squeezes juice from a lime as she makes a Zing Zang smoothie, which also has pineapple juice, spinach, kale, green apple, banana and spirulina. 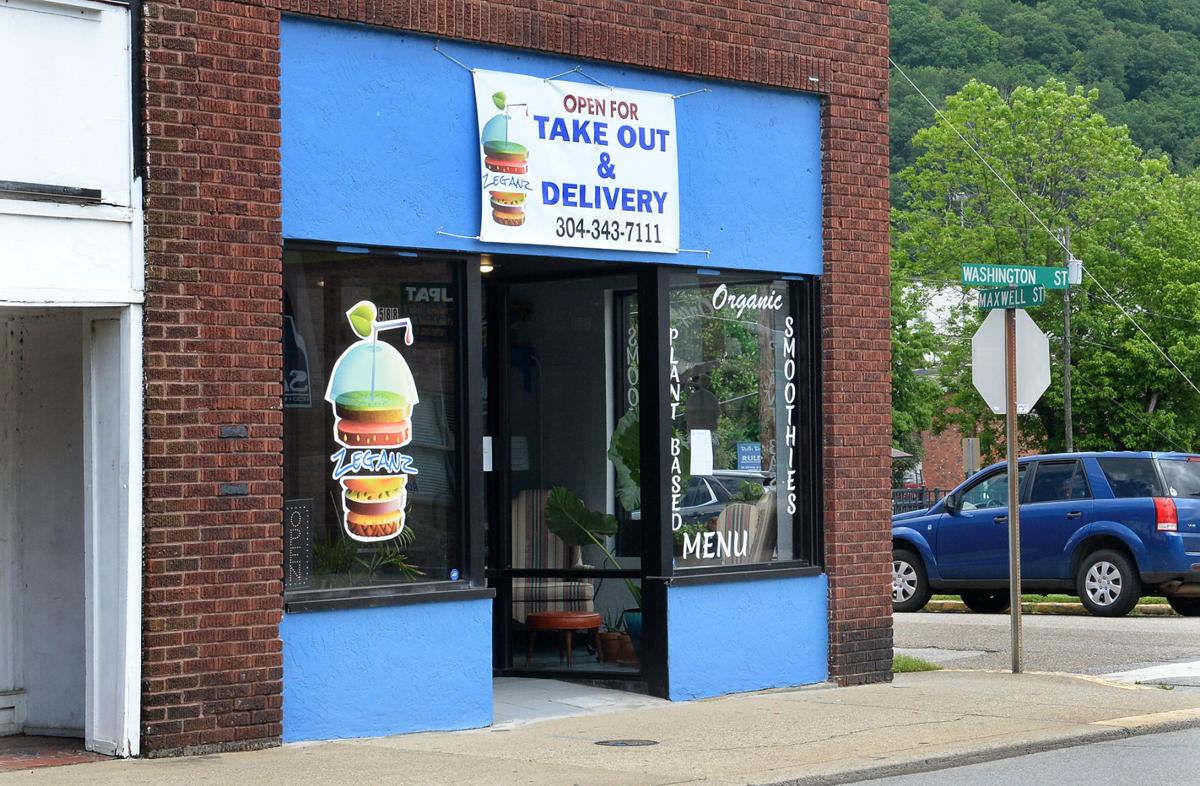 Jars of organic herbs and spices which can be added to the smoothies are seen at Zeganz.

Alexis Zegeer squeezes juice from a lime as she makes a Zing Zang smoothie, which also has pineapple juice, spinach, kale, green apple, banana and spirulina.

Paul and Alexis Zegeer didn’t plan on opening Zeganz, their vegan smoothie shop and juice bar, in the middle of a global pandemic. They were just hoping to bring a new, healthy option to Charleston in time for spring.

“We got approval from the health department right before the governor closed things down,” said Paul Zegeer, a Charleston native. “We were considered essential, but thought maybe we should hold off for a while.”

The young couple delayed their opening until three weeks ago, just as safety restrictions began to loosen. Now they’re trudging through another wet West Virginia spring.

The 31-year-olds said they were looking forward to warmer weather and summer sunshine to boost sales.

“When the sun is out, this place can get busy,” Alexis Zegeer said.

The couple said they decided to open a smoothie shop in Charleston because there weren’t any here. In Florida, where Alexis Zegeer lived for about 15 years, she said there were smoothie shops all over the place — along with plenty of healthy eating options.

“There wasn’t a lot of that here,” she said, adding there were very few vegan restaurants in the state.

“If you look, you can usually find a couple of places that have some vegetarian or vegan options,” Paul Zegeer said. “We ate at Bluegrass Kitchen three or four times a week because they had things on the menu that you could change to make vegan without much effort, but there wasn’t a lot in Charleston.”

Token, single-menu vegan items tended to make them uneasy, they said, so they usually stayed away from those places.

The couple hasn’t always been vegan, but they switched from a mainstream meat and vegetable diet to vegetarian, and then to vegan, about a year and a half ago — about six months before they got married.

“There’s a lot of good information out there. Documentaries you can watch on Netflix. Plant-based is just better for your health,” Paul Zegeer said.

“You can avoid, reduce or even correct all kinds of health problems through diet — diabetes and weight issues, arthritis, inflammation,” Alexis Zegeer added.

Instead of dairy products like yogurt and milk, the Zegeers rely on almond milk, coconut water and a wide assortment of fruits, seeds and leafy greens to make their smoothies.

The menu currently includes offerings like the Orange Zinger, which features orange juice, carrots, pineapples and ginger; the Strawberry Bonanza, which has vanilla almond milk, bananas and strawberries; and the Zing Zang, a green smoothie made with kale, spinach, lime, spirulina and more.

Smoothies come in 16-ounce and 24-ounce sizes, and prices range from $7.50 to $10. Add-ons like chia seeds, peanut butter or matcha cost extra.

Zeganz, located on Charleston’s East End next door to Sullivan’s Records and across from Starlings Coffee and Provisions, opened with little fanfare. Paul Zegeer said they had plans to do a much bigger grand opening celebration later this summer, but like a lot of other businesses, they’re watching and waiting to see what happens with COVID-19.

They said they also plan to expand the menu past smoothies to include full-fledged vegan diner fare.

“We’re probably going to do a lot of what might be considered comfort food, things like vegan bratwursts and burgers,” Paul Zegeer said.

“But I definitely want to get my mac ‘n’ cheese in there,” Alexis Zegeer added.

And maybe a fish sandwich, though Paul Zegeer assured no fish are harmed in the making of the sandwich.

“It’s made with banana blossoms, but it is so good,” he said.