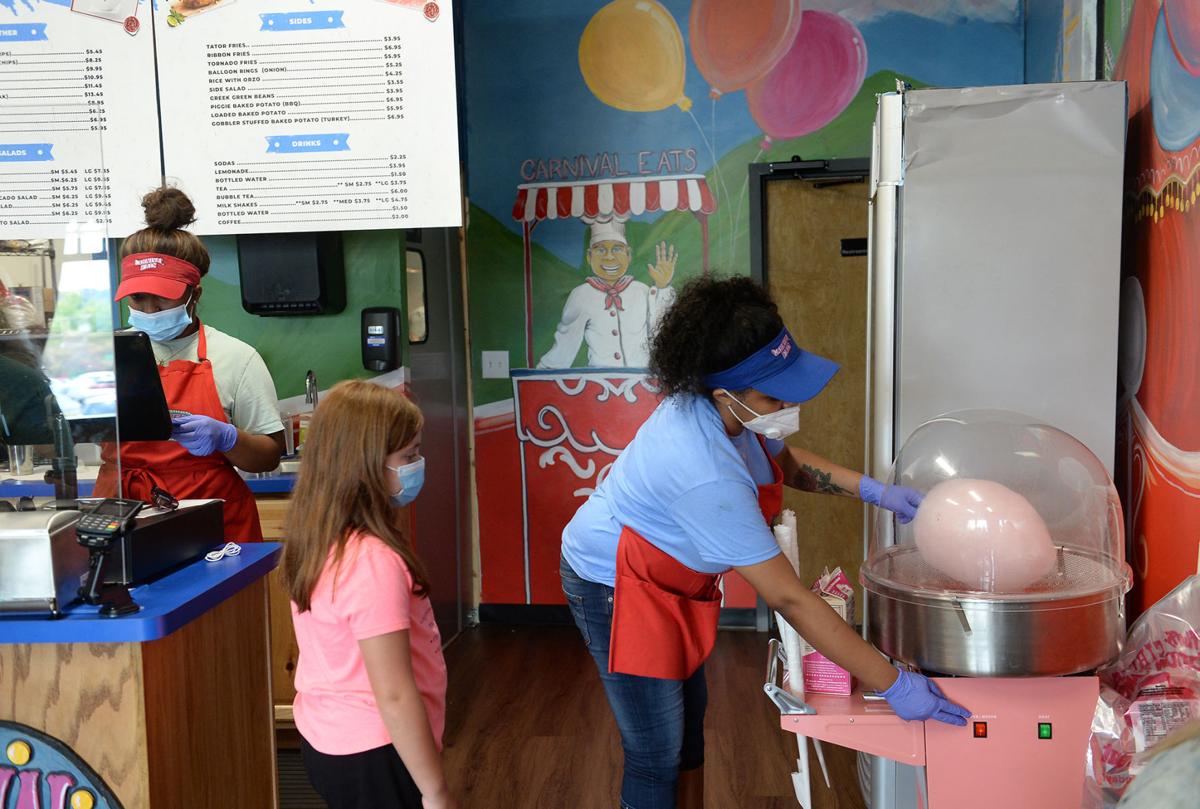 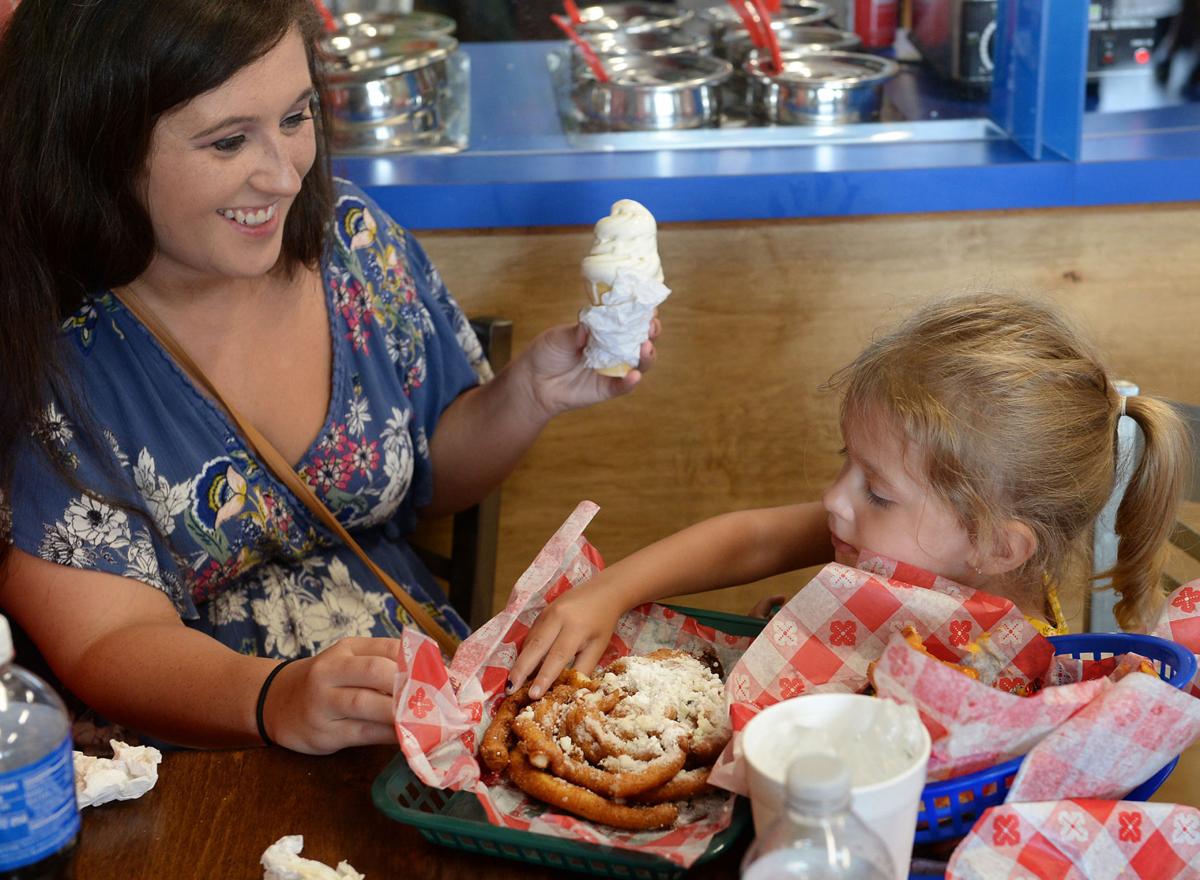 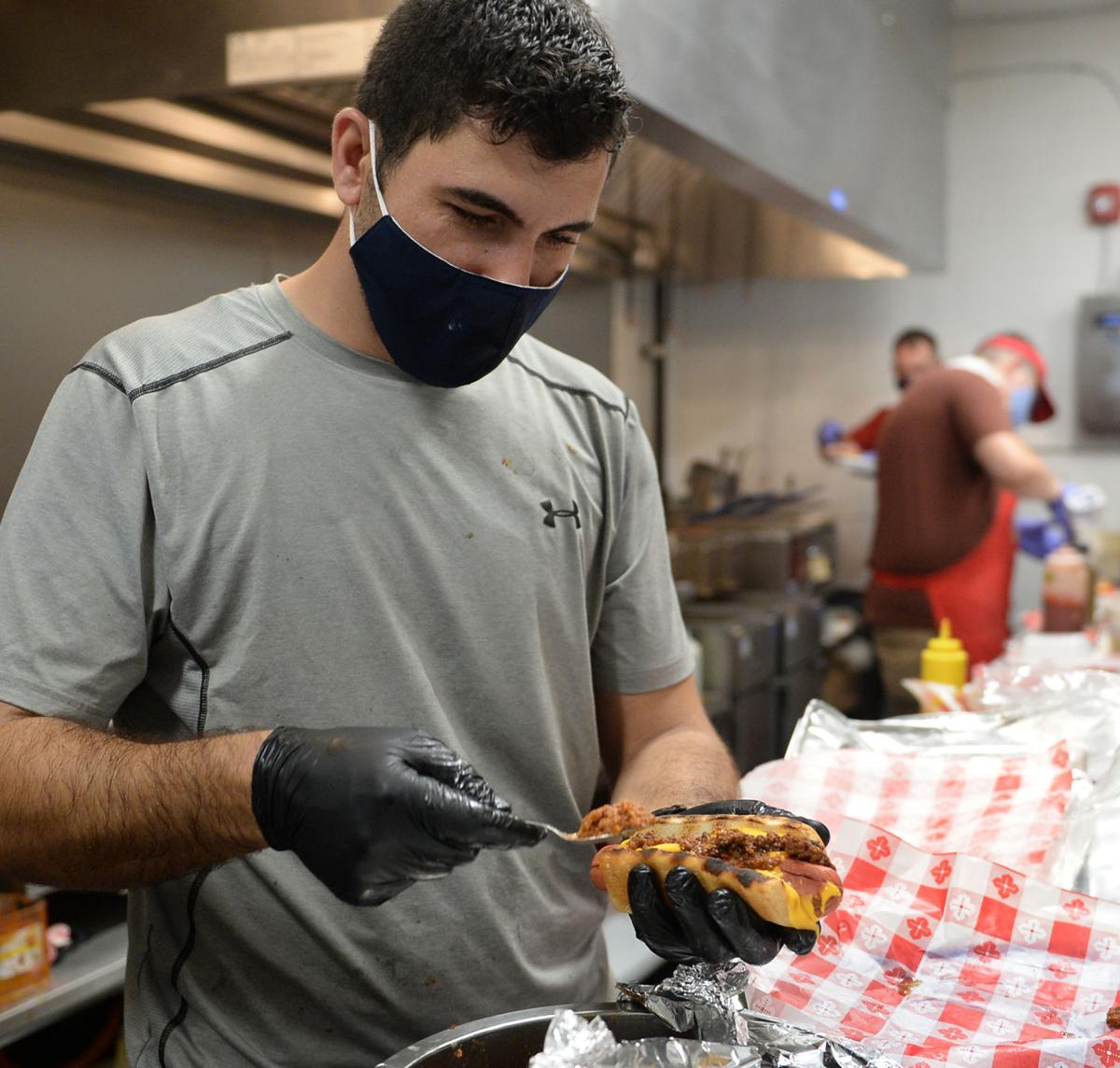 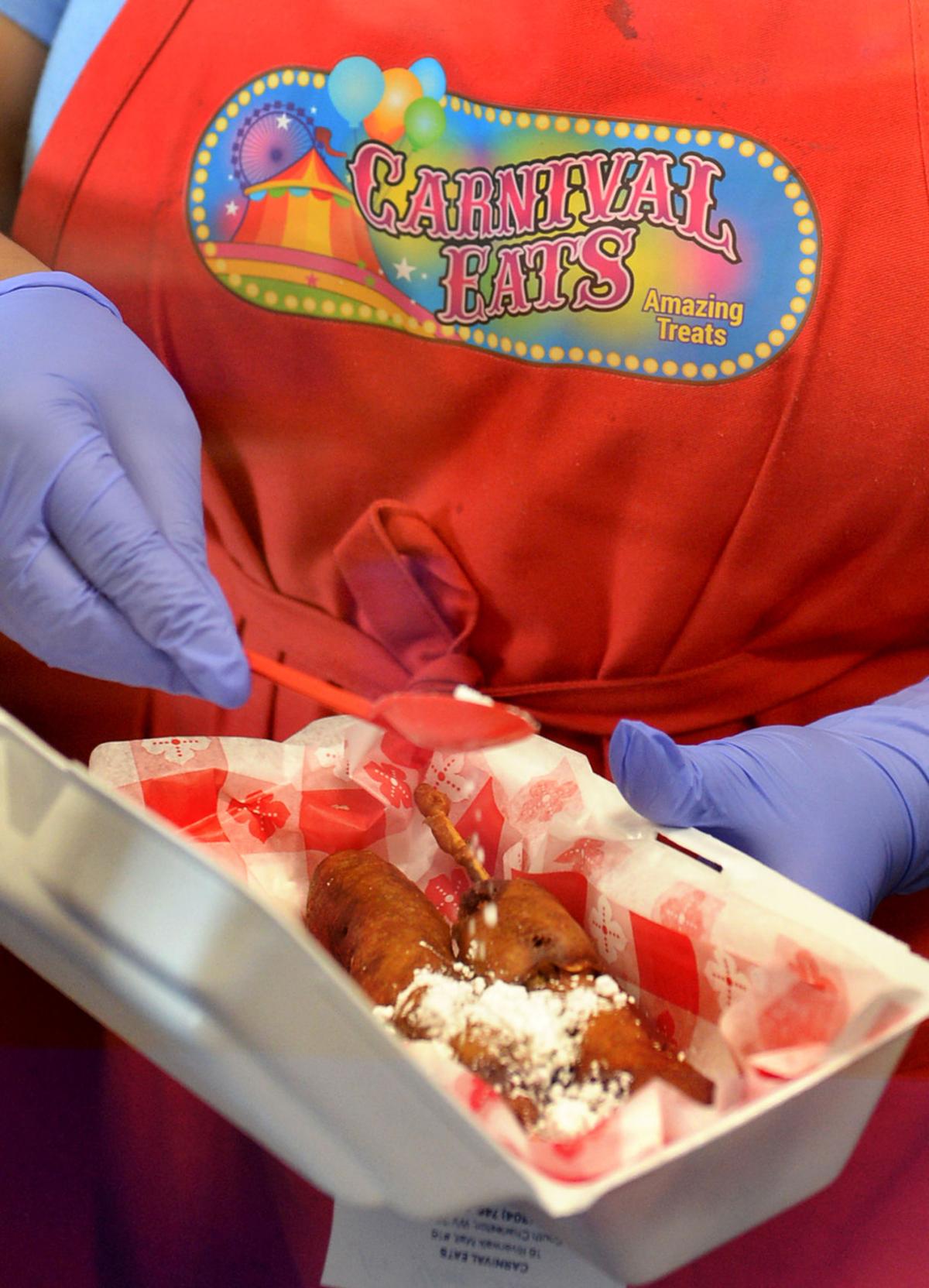 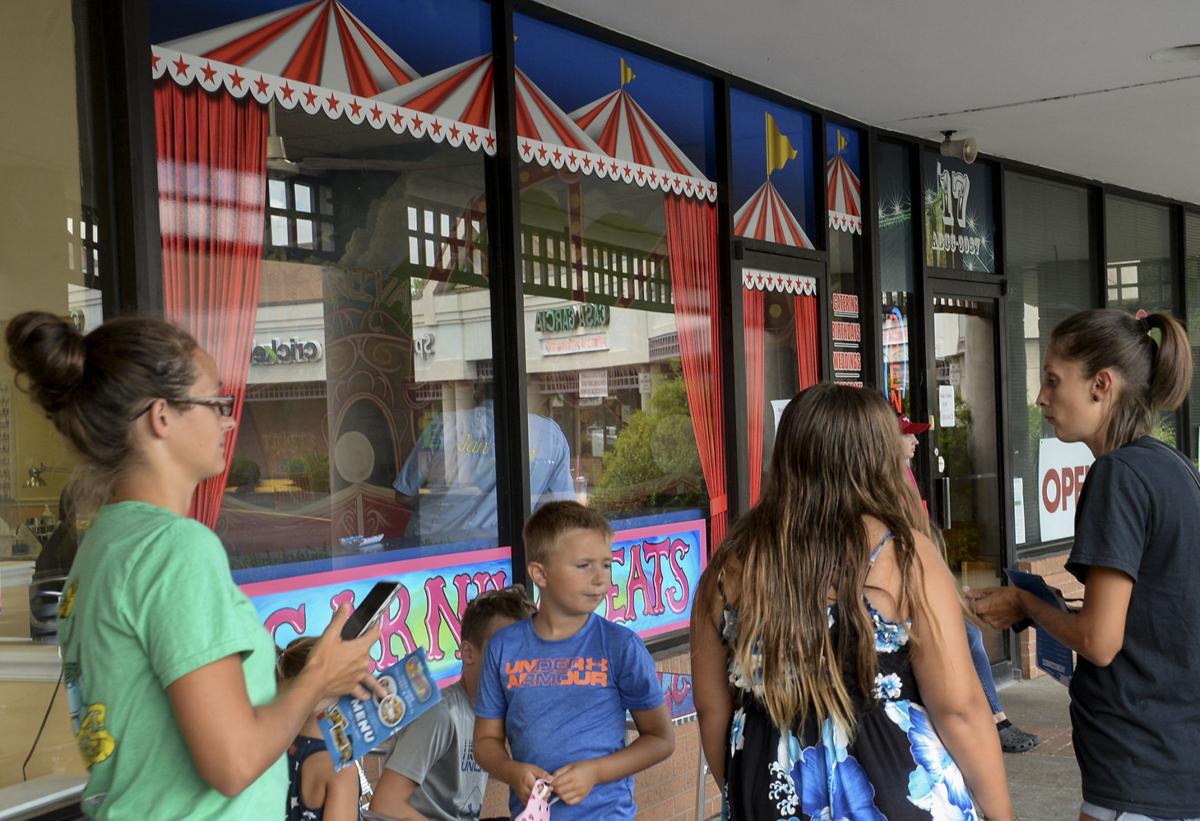 People wait to get inside Carnival Eats, at the Riverwalk Plaza in South Charleston, earlier this week. 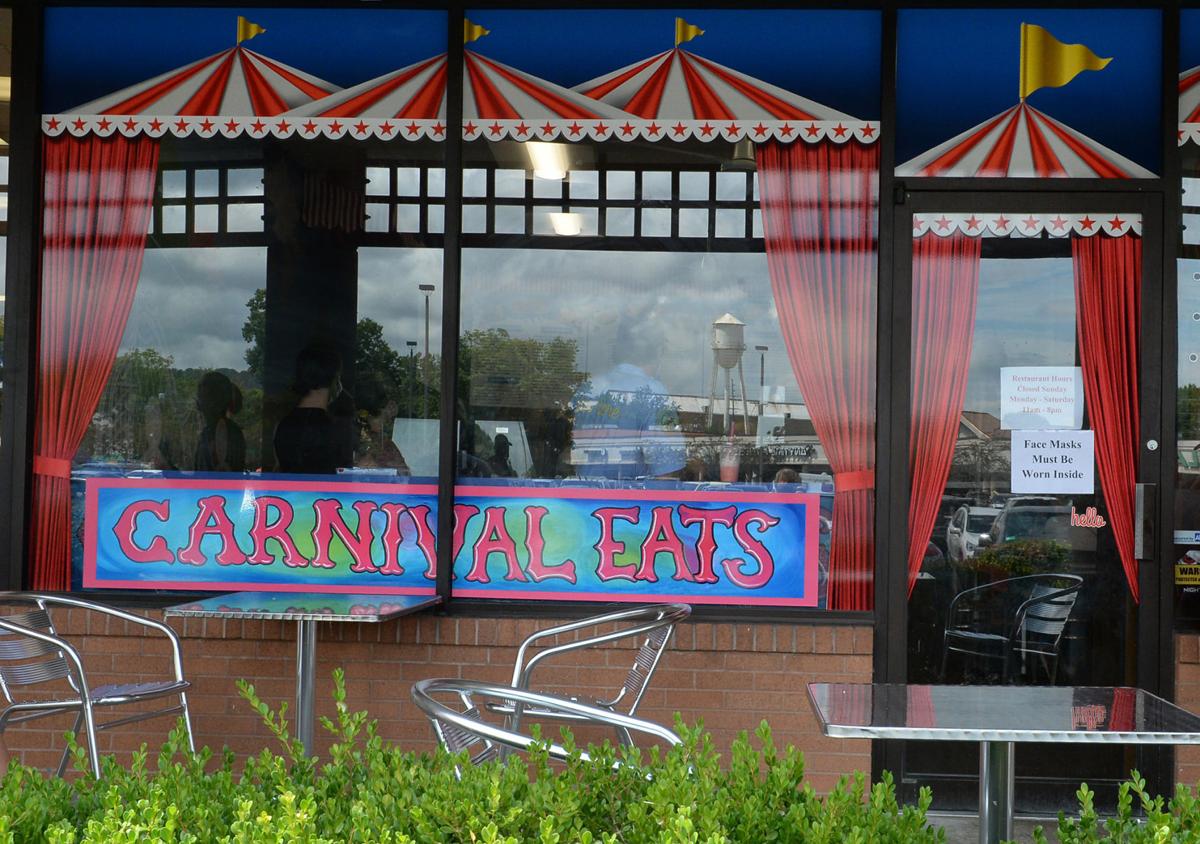 Carnival Eats, located at the Riverwalk Plaza in South Charleston, offers typical county-fair food, such as funnel cakes, deep-fried candy bars and corn dogs. The restaurant opened shortly after most fairs and festivals in West Virginia were canceled because of the coronavirus pandemic.

People wait to get inside Carnival Eats, at the Riverwalk Plaza in South Charleston, earlier this week.

Carnival Eats, located at the Riverwalk Plaza in South Charleston, offers typical county-fair food, such as funnel cakes, deep-fried candy bars and corn dogs. The restaurant opened shortly after most fairs and festivals in West Virginia were canceled because of the coronavirus pandemic.

In the middle of a rainy afternoon, the crowd around Carnival Eats at the Riverwalk Plaza, in South Charleston, had thinned out. The tables on the sidewalk were full, but there was still a pair of empty tables inside the small eatery’s dining room.

Looking a little haggard behind his face mask, owner and chef Alan Takla sat down at a spare table and said, “We’ve been swamped since we opened. The last four days, we’ve been slammed.”

He and his stepson, 20-year-old Nick Withrow, the restaurant’s manager, said they believed it was only because of the rain that they were getting a break.

Busy is a good problem to have for a new restaurant.

Like several other new businesses in the area, Carnival Eats opened late. Takla said he and his partner, Debbie Joyce, planned to open in mid-spring.

“But then COVID-19 shut everything down. Not only could we not open, but we couldn’t get anybody to come in and finish the store. Nobody could work,” Takla said.

The family rolled up their sleeves and finished the dining room. They installed the counter. Takla said he finished the floor, and his wife’s nephew painted the carnival mural on the walls.

But Takla recognized a little serendipity in their timing. Carnival Eats opened just a few weeks after virtually every fair and festival within driving distance announced they would not be opening this year.

That people would flock to a place that serves elephant ears, cotton candy and spiral-cut fries seemed inevitable.

“People were missing their summer fun,” Takla said. “They wanted their funnel cakes.”

And Carnival Eats is pleased to serve them.

None of it is “health food,” although they do have a small selection of salads. Takla said they’ve had customers order the salad.

“They got it with the chicken. It’s very good,” he said. “That’s healthy.”

Withrow nodded, but said, “Yeah, but when you go to the fair, are you really looking for health options?”

Probably not, but Carnival Eats wants to be more than a novelty fair food restaurant. While they’ve got all the festival food hits, including deep-fried Twinkies and French Toast Bacon Bombs, there’s some Mediterranean fare, as well.

Takla was born and raised in Syria, but he left the Middle East decades ago.

“I was in the Caribbean for 12 years,” he said. “I’ve been all over the place — been around the world twice.”

Six years ago, Takla came to the United States, and then, to West Virginia. He has a background in the restaurant business and found work locally. He married Withrow’s mother, Amanda, and became a naturalized citizen last year.

“I love America,” he said. “I love West Virginia. I don’t know why anybody would ever want to leave. We go to visit other places and we just want to come back. It’s just really great here.”

The response from the community has been a little more than they expected, Takla said, and they’re working out some rough spots with their service.

While Takla spends most of his time in the kitchen, Withrow is working with the staff at the front counter. Many of them look like teenagers.

He acknowledged that he might look a little young for the job, “but I’ve been working in restaurants since I was 16.”

Withrow is still working in other restaurants. Outside of his job at Carnival Eats, he has a job at a restaurant in Barboursville. He’s also an incoming junior at Marshall University, studying hospitality management while minoring in entrepreneurship and marketing, among other things.

For now, Withrow and Takla have their hands full with Carnival Eats, although Takla already is talking about adding to the menu and expanding to offer catering services.