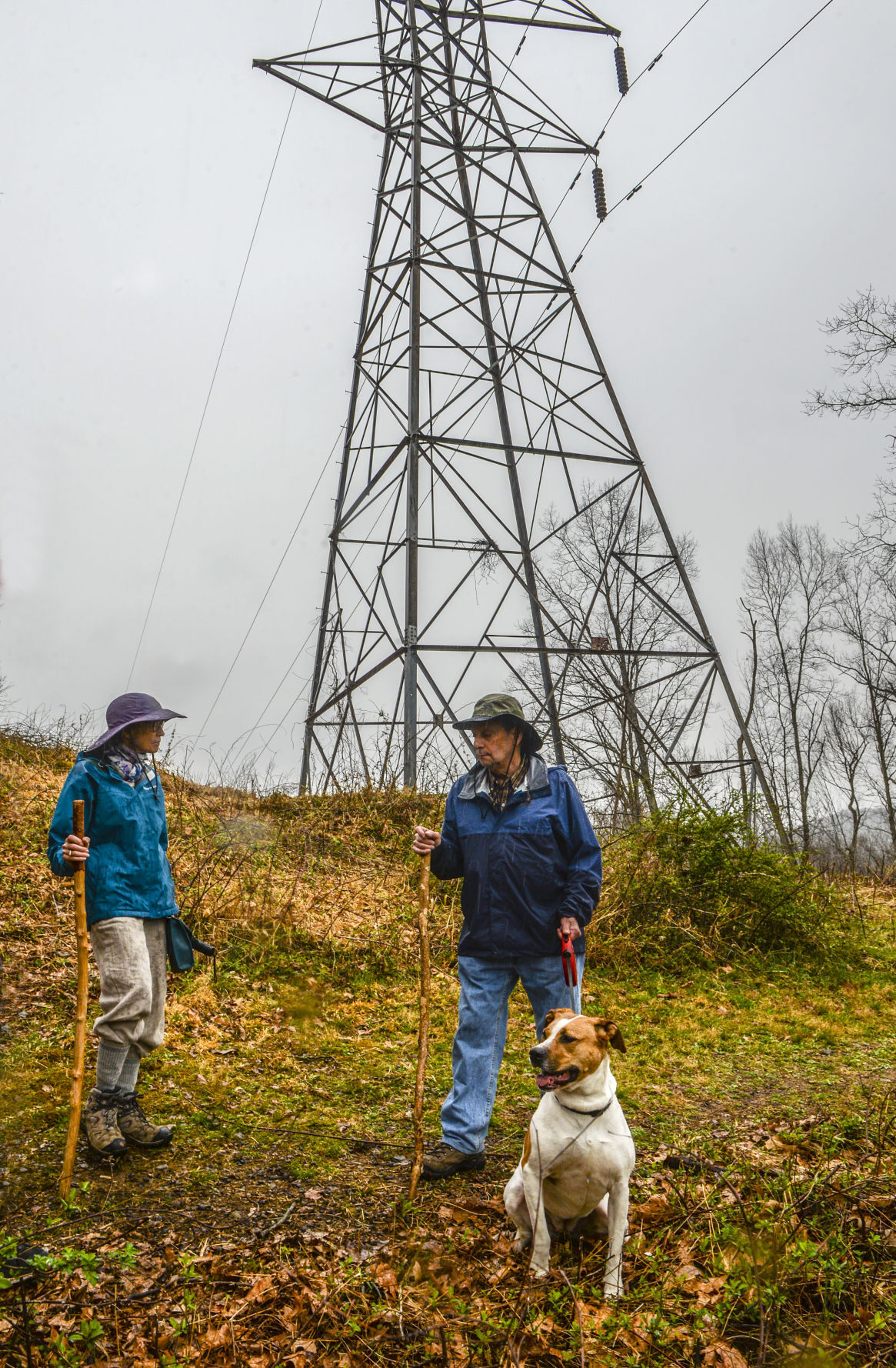 Charleston attorney Robin Godfrey and his wife, Mary Ellen O’Farrell, walk their dog, Diamond, near an AEP tower in Cato Park on Thursday. The power company plans to add lines to its towers in the West Side park, using a roadway it will widen. Godfrey, O’Farrell and others who frequent the park are unhappy that the company did not inform the public of the road work. 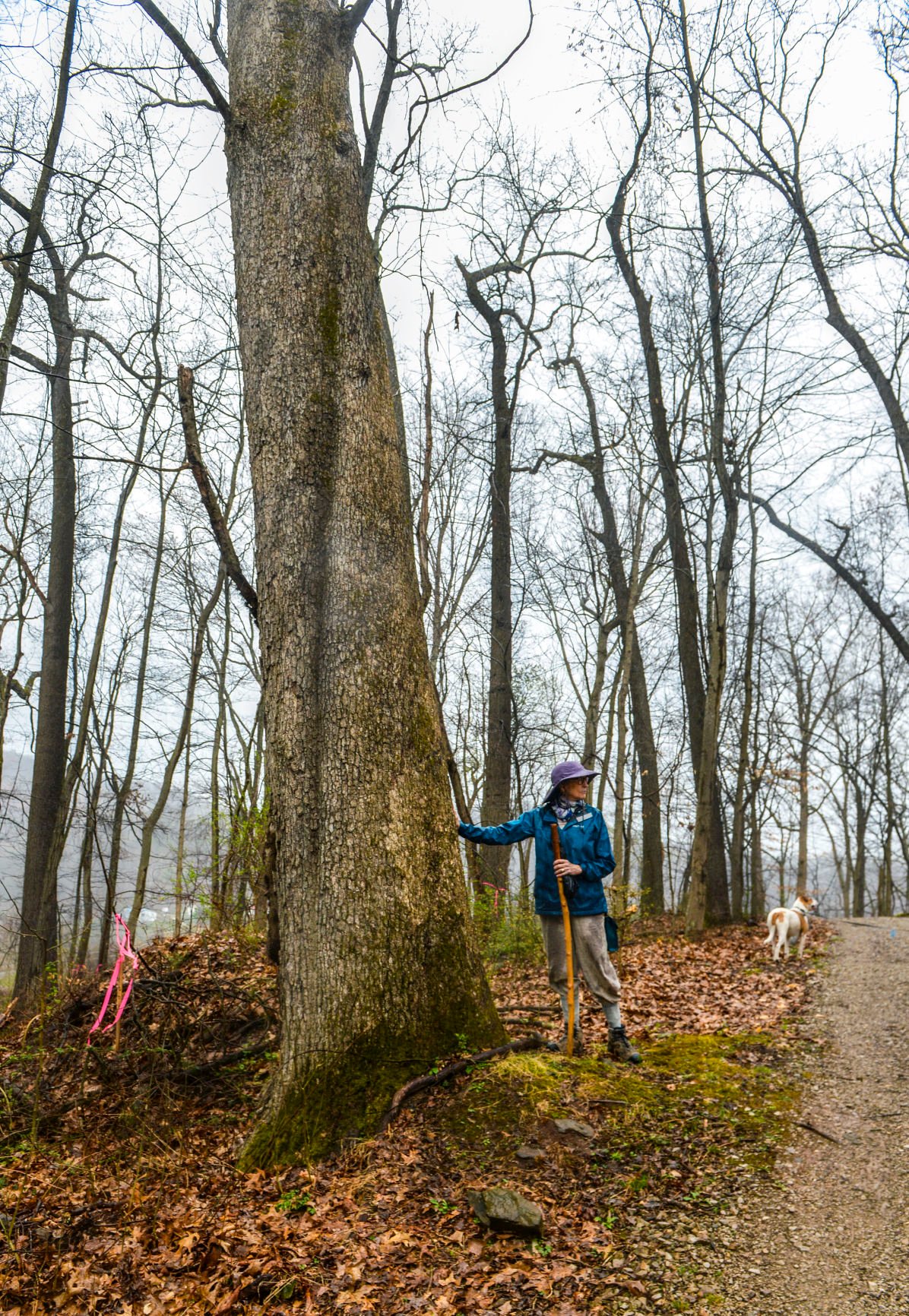 Mary Ellen O'Farrell stands beside a tree along Garrison Trail in Cato Park. 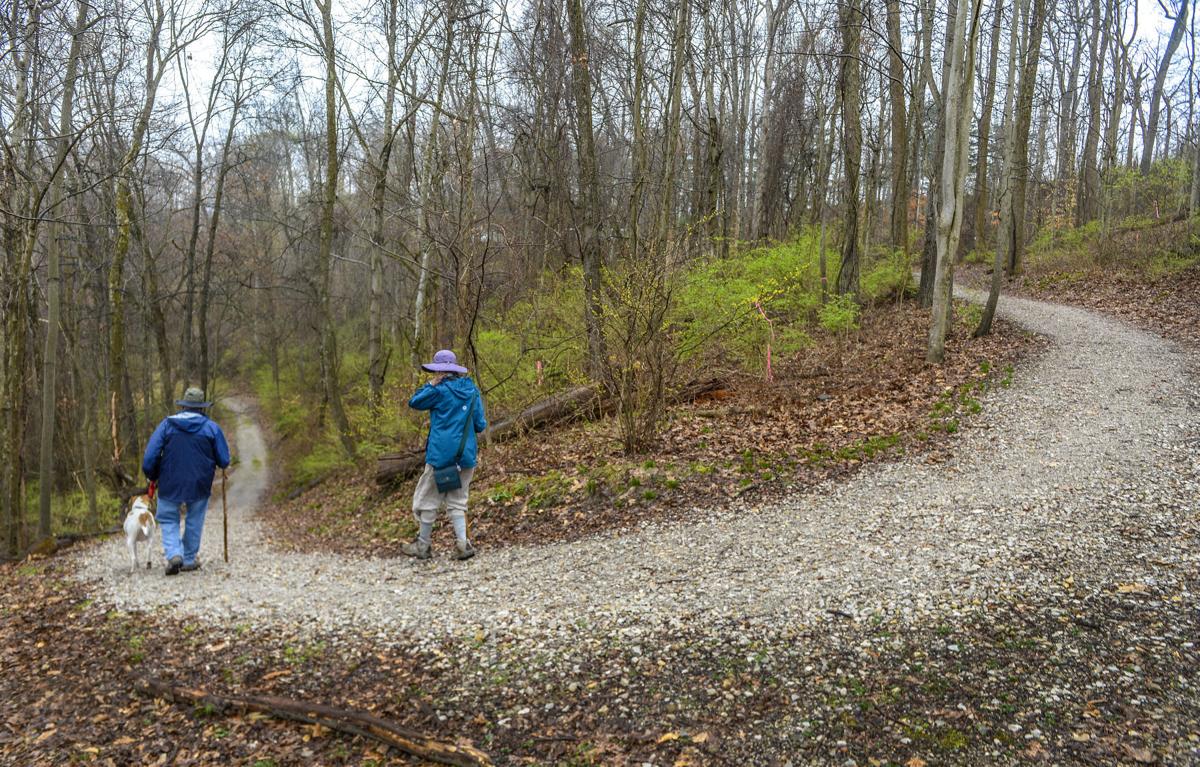 Charleston attorney Robin Godfrey and his wife, Mary Ellen O’Farrell, walk their dog, Diamond, near an AEP tower in Cato Park on Thursday. The power company plans to add lines to its towers in the West Side park, using a roadway it will widen. Godfrey, O’Farrell and others who frequent the park are unhappy that the company did not inform the public of the road work.

Mary Ellen O'Farrell stands beside a tree along Garrison Trail in Cato Park.

Those who regularly hike or bike on Cato Park’s 5-mile network of trails first realized a new road through Charleston’s West Side preserve was being planned when survey stakes and hundreds of strips of orange tape suddenly appeared one day in parallel lines framing much of Garrison Trail.

“We knew that AEP [American Electric Power] plans to add new power lines to existing towers that go through a part of Cato Park,” said retired Charleston attorney Robin Godfrey, who first spotted the survey markers on March 18 while walking the trail with his wife, Mary Ellen O’Farrell.

Several months ago, an AEP contractor cleared trees and brush from the area beneath the towers to prepare for the work.

“We assumed AEP would use that large right-of-way for access to work on the new lines,” Godfrey said during a walk Thursday along Garrison Trail. “But we found out they are planning to build a new road that will traverse about 50% of this trail — the park’s main walking trail,” he said.

Soon after entering the trail from the the parking area near Cato’s swimming pool, lines of survey stakes and strips of survey tape appeared on either side of the trail, while ribbons of blue tape appeared to mark a centerline for a proposed road corridor.

“This all happened without any public notice being posted or public hearing being held,” Godfrey said. “Most of the trail work at Cato has been done by volunteers, yet no one was consulted.”

The vacuum of information about the road work planned by the power company spawned a volley of emails and social media postings among concerned Cato Park users. The width of the planned roadway, based on survey marker placement, was described as 60 or more feet. Concerns were expressed over the size of crushed rock that would be left on the road, since an AEP access road stemming off the road to nearby Edgewood Elementary School was surfaced with fist-sized rock chunks.

Later on Thursday, the Charleston City Council’s Parks and Recreation Committee devoted much of its meeting time to addressing concerns over the road’s potential effect on the park.

Frank Jenkins, AEP’s transmission project manager, told committee members, Mayor Amy Shuler Goodwin and about 50 members of the public attending the session, that, while the West Virginia Department of Environmental Protection allows for a 50-foot right-of-way for the road, AEP plans to use a narrower path.

“We can keep the new road to 12 feet wide,” plus another 2 feet in width needed for an adjacent drainage ditch, Jenkins said. Garrison Trail, built on the path of an abandoned roadbed, is already 9 to 10 feet wide, he said.

The roadway might be widened temporarily to allow bucket trucks and other construction vehicles to negotiate sharp curves along Garrison Trail, or to bypass mature trees growing near the planned road, Jenkins said.

“We plan to avoid as many trees and as much vegetation as possible,” he said. “I don’t think any large trees will be cut.”

Jenkins said AEP’s work in Cato Park involves a portion of an upgrade to a 6-mile section of transmission line stretching from a substation on Capitol Hill to a substation in North Charleston. Currently, only one-half of each support arm on each steel lattice tower along the route carries power lines and conductors. The upgrade will add transmission lines and conductors to the portions of support arms that are empty.

Access to two of the towers located on ridge spurs off Garrison Trail will be accomplished by using ATVs to haul work crews and ladders to the worksites, Jenkins said.

Culverts and sumps along Garrison Trail will be replaced or repaired after the work is complete, he said, and the trail/road will be resurfaced with the same size of crushed rock now topping the trail.

Plans call for closing Cato’s trails while the work is in progress. A two-week work session is set to begin during the week of April 5, with a second work period scheduled to run from May 3 to June 4, Jenkins said.

During a public comment period following Jenkins’ presentation, Harvey Allen of the Kanawha Trail Alliance said trails other than Garrison will be affected by AEP’s power line work, including several “hand-cut single-track trails that will be destroyed.”

According to Allen, “90% of Cato Park’s trail system was built by volunteers, and yet we were never asked our opinion” on how to avoid damaging them.

“Citizens value this area but have been shut out of the planning process,” O’Farrell said. “Charleston is under-parked, and Cato is the only wooded park in the city. What’s proposed is bad for Charleston.”

“We were blindsided by this,” said Godfrey. “There was no posting about what is planned on AEP’s website and no public hearing or comment period. We had to look at the flags and try to figure out for ourselves what is going on.”

Deanna McKinney suggested that she and fellow City Council and Recreation Committee members “take the time to walk the trails and see for ourselves how building the road will affect them. The idea is not to try to stop the project, but to work together to make it better.”

“Let’s take time to be thoughtful and reflective,” the mayor said. “I think it would be good to walk the trails with AEP,” which she described as “a good partner with the city.”

After the meeting, Goodwin said the city first learned of AEP’s plan to build the road in Cato a few weeks ago.

“When you don’t provide information, that space can be filled with anything,” she said. “I understand the frustration of the people who love Cato Park. That community wants to be heard and, tonight, AEP heard them.”