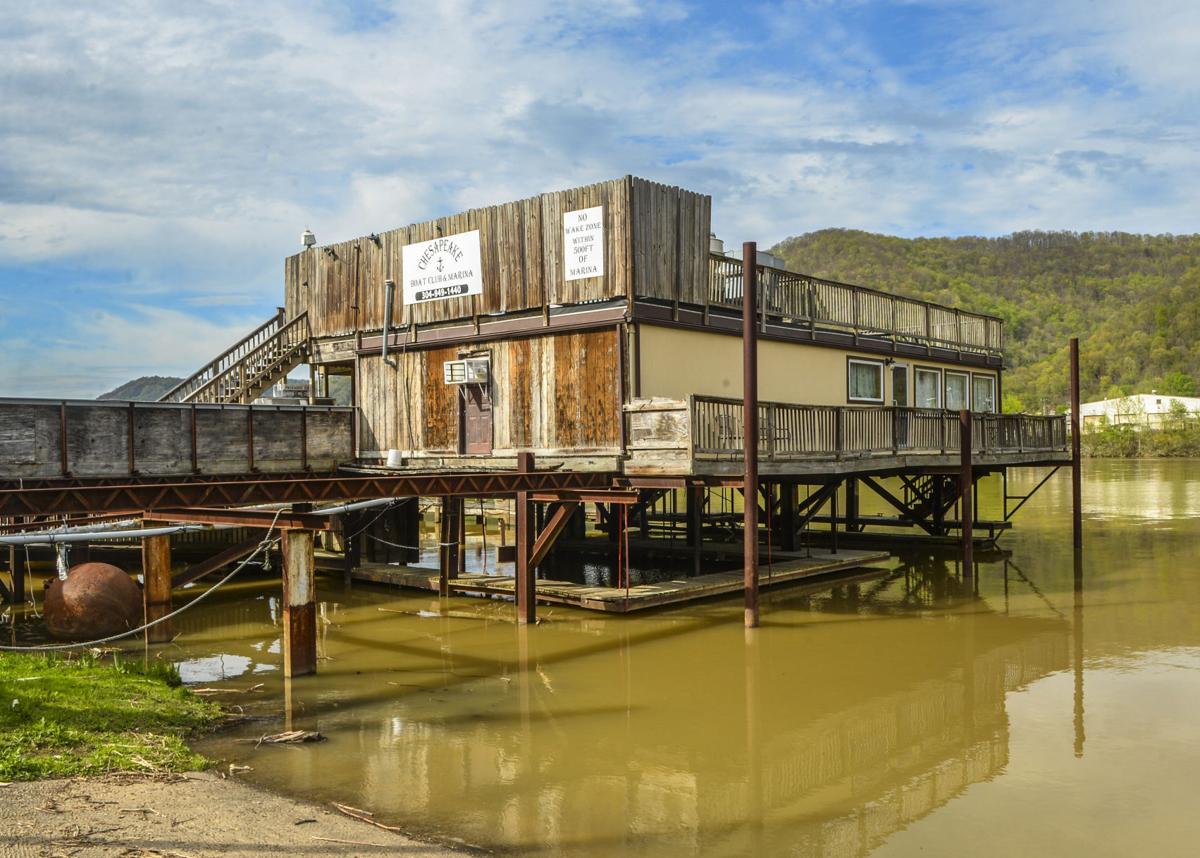 Chesapeake’s boat ramp and marina would be upgraded under an outdoor recreation plan for the Upper Kanawha Valley. 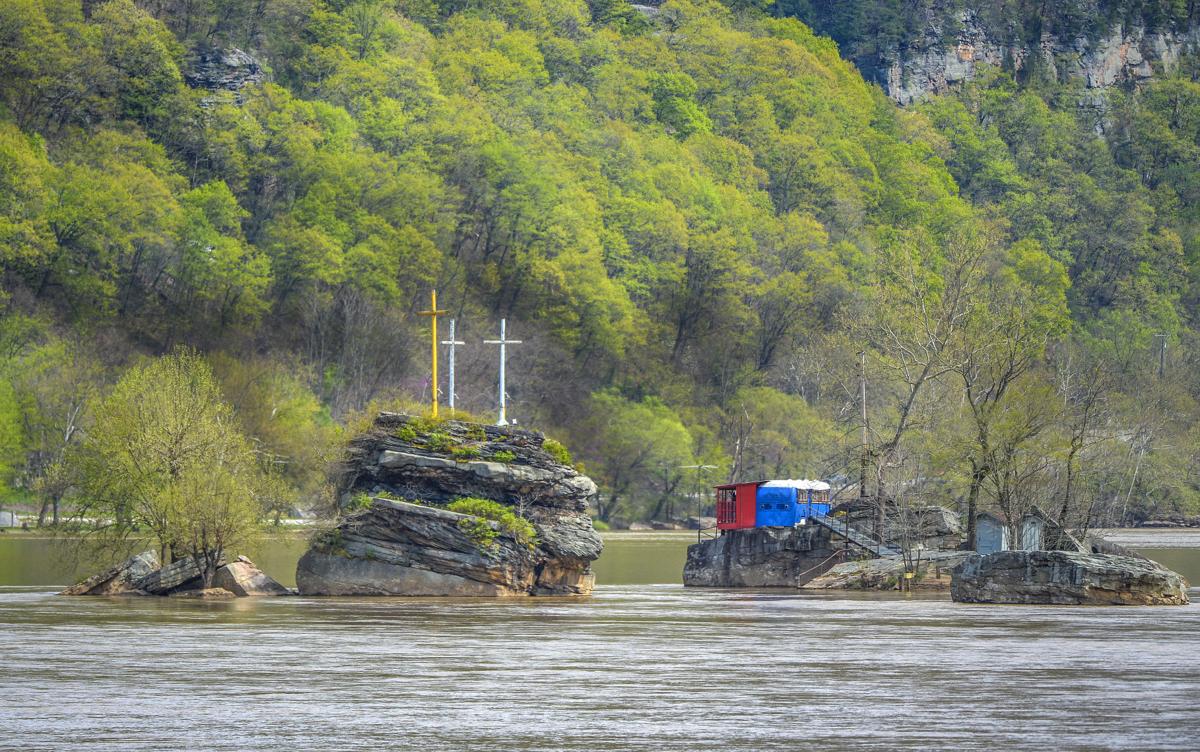 A small picnic area and improved fishing access would take shape in Gauley Bridge across from School Bus Rock at the confluence of the New and Gauley Rivers under a new outdoor recreation plan. 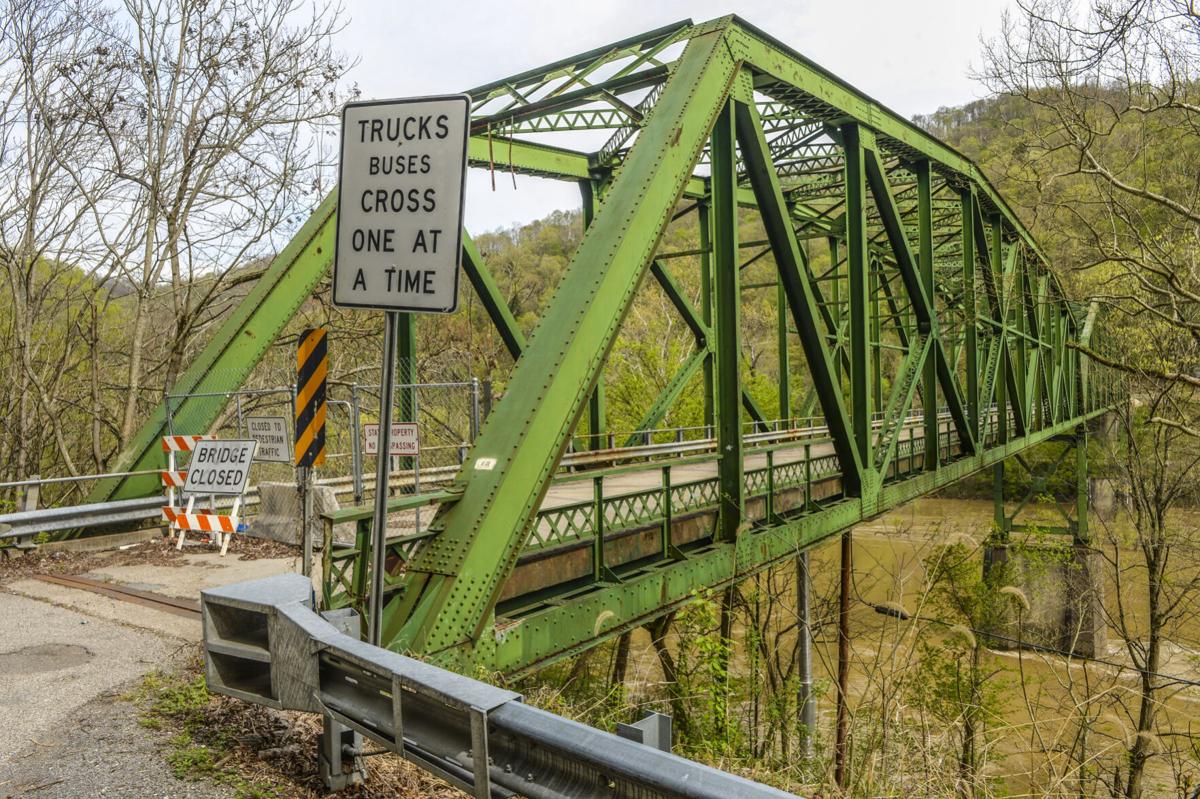 A new outdoor recreation plan for the Upper Kanawha Valley envisions the possibility of the state Department of Transportation reopening the Kanawha Falls Bridge, closed since 2018, to at least pedestrian traffic. 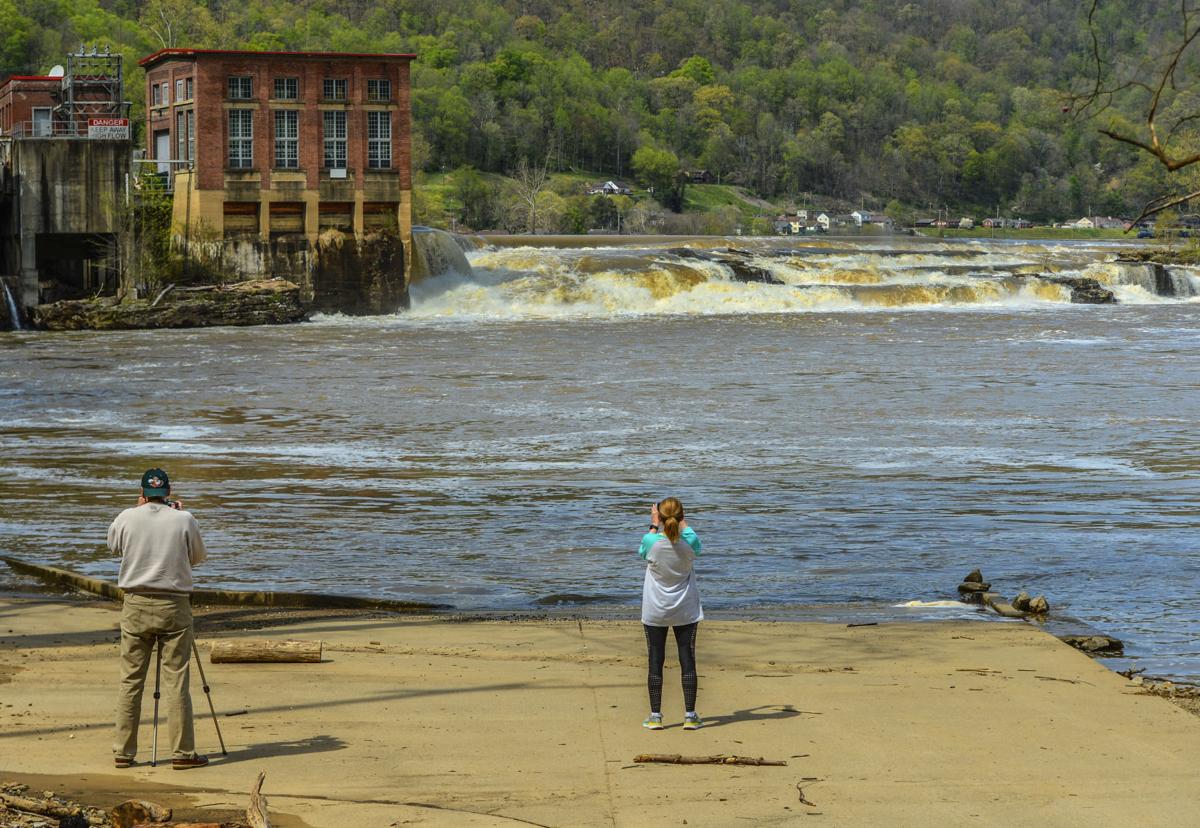 A pair taking the scenic route while driving through West Virginia stops at Glen Ferris to photograph Kanawha Falls, where a campground and portage trail would take shape under an outdoor recreation plan for the Upper Kanawha Valley. 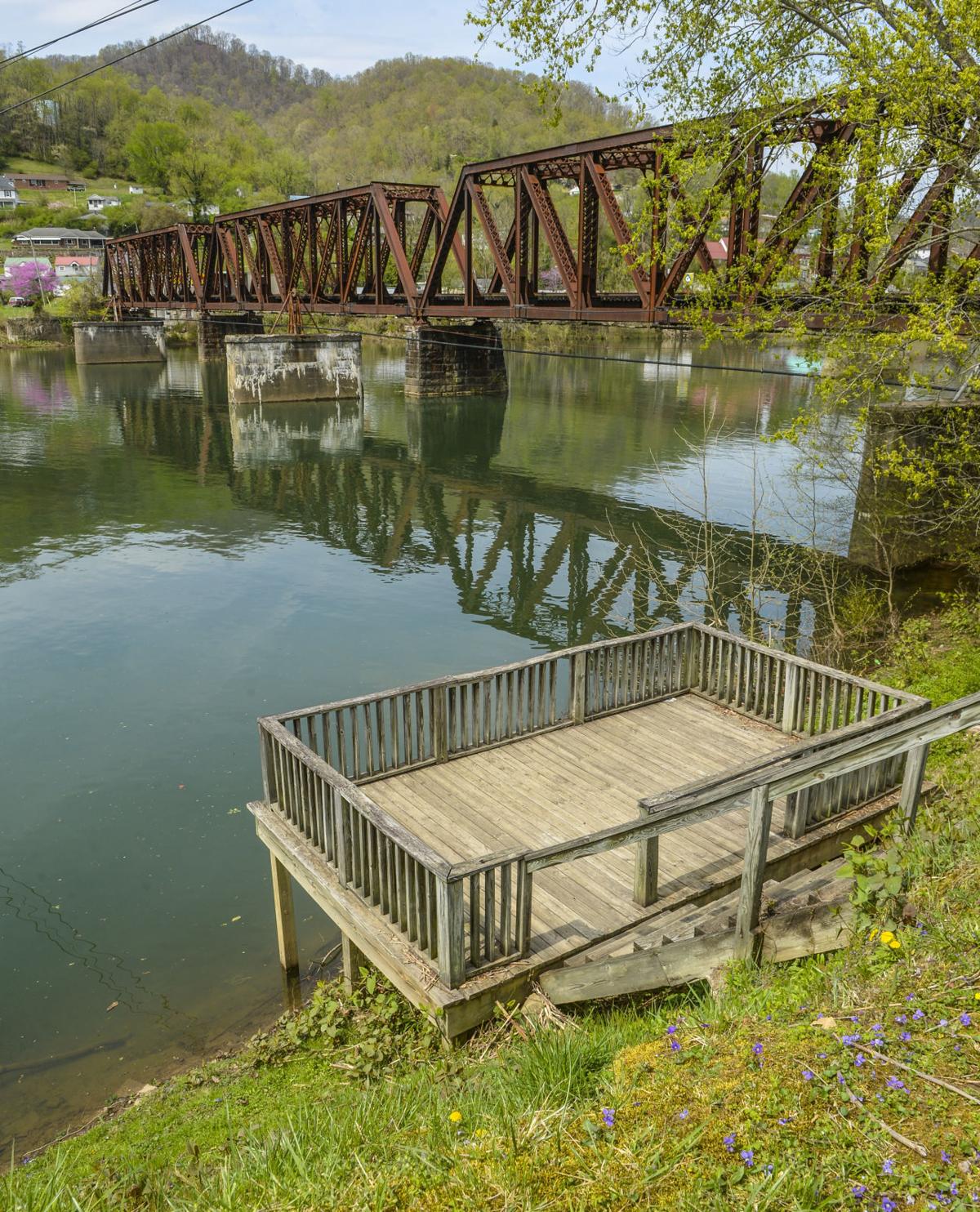 A boat ramp near this site at the mouth of the Gauley River at Gauley Bridge would be developed under a master plan for outdoor recreation in the Upper Kanawha Valley.

Imagine hiking or biking on a wooded mountain trail, spending the night in a yurt with a sweeping view of the Kanawha River, and then descending a spur trail to one of a dozen Upper Kanawha Valley river towns for an afternoon of ATV riding or kayak angling followed by a riverside dinner.

Those and a host of other outdoor recreation possibilities are envisioned in a recently released development plan for the often-overlooked stretch of the Kanawha River Valley between Charleston and Gauley Bridge.

The plan, prepared for the Kanawha County Commission with support from the Benedum Foundation by Pittsburgh-based Civil & Environmental Consultants, views the 30-mile segment as “The Valley,” an ecotourism destination encompassed by the natural beauty of the Upper Kanawha Valley.

Included in the plan is a development proposal for the 5,000-acre Mammoth Preserve, a former surface mine site north of Smithers now owned by the West Virginia Land Trust, and a proposed addition of a new Hatfield-McCoy ATV trail system near Montgomery. Several new campgrounds, marinas and boat launches are also proposed.

If developed as suggested, The Valley, which connects Charleston with the New River Gorge National Park and Preserve, would “fill in the missing tourism gap” by providing new amenities for visitors and area residents alike, according to the plan’s introductory text.

“The existing landscape lends itself to engaging outdoor amenities such as boating, paddling, fishing, hiking, horseback riding, off-road adventures, ATV trail networks and diverse lodging opportunities,” according to the plan.

A centerpiece of the plan is the creation of a trail system on the ridgelines topping both sides of the river, with spur trails providing connections to Upper Kanawha Valley communities and other outdoor recreation activities. Between the spur trails, cabins, huts, yurts and other remote rental lodging would be placed at overlook sites along the ridgeline.

With the ridgeline trail system in place, visitors will be able to choose their day’s adventure, depending on how much hiking or biking they feel comfortable completing and the availability of other recreational activities to sample.

The plan calls for building a new boat ramp at Malden, while Diamond would be the access point for a proposed four-wheel drive off-road excursion area and ATV system on a 4,500-acre former surface mine tract.

On land adjacent to the Walmart off U.S. 60 at Dickinson, a welcome center for The Valley is proposed. It would include a campground, upscale RV park, space for shops, a non-chain restaurant, an amphitheater, a BMX bike park with a skate park component, and an “event-sized boat ramp and marina.”

On the outskirts of Smithers, a new welcome center for the Mammoth Preserve would be built. In the preserve itself, the plan proposes designating one portion for use by hikers, another for mountain bikers and a third for horseback riders, each with separate campgrounds.

The bridge across the Kanawha between Smithers and Montgomery would connect North Rim hikers and bikers with amenities in the former college town of Montgomery, and provide a link to to the South Rim Trail. It also provides vehicle access to a proposed trailhead campground for the Hatfield-McCoy Trail segment either at the mouth of Morris Creek or a short distance up Morris Creek Road.

At Longacre, an expanse of flat land along the Kanawha between Smithers and Boomer, an RV campground is proposed, along with boat-accessible primitive campsites on nearby Wheeler Islands, a pair of forested sandbars in the Kanawha. A new boat ramp is proposed for Boomer, while a kayak launch area is planned at Charlton Heights.

A few miles upstream at Glen Ferris, a campground is proposed for an unspecified site below Kanawha Falls, along with a portage trail providing paddlers with access to the river below the falls and the pool above.

Gauley Bridge would serve as the northern terminus of the trail. Under the plan, improvements would be made to an existing unofficial take-out site at the mouth of the Gauley River, and a small park with a picnic area and fishing access would take shape nearby, across the last few yards of the New River before it merges with the Gauley to form the Kanawha.

Marmet would be the southern terminus of the proposed South Rim Trail, and under the master plan, would also get a new boat ramp. Long-range plans call for a trail connecting Marmet with Kanawha State Forest. Connector trails stemming off the South Rim Trail would provide links to Chesapeake, Chelyan/Cabin Creek, East Bank, Pratt, Handley, Mount Carbon/Deepwater and a northern terminus at Kanawha Falls.

Chesapeake’s marina and boat ramp would get an upgrade under the plan, while a new campground offering everything from tent camping to an RV park and cabins is on the drawing board for the mouth of Cabin Creek at Chelyan/Cabin Creek. A kayak launch would be built on Cabin Creek near the Cabin Creek Clinic to provide a 6-mile paddle to the stream’s confluence with the Kanawha.

Another campground and boat launch are envisioned for East Bank, where a former coal-loading dock could be repurposed as the mooring site for a floating, barge-mounted restaurant, serving diners arriving by boat or vehicle.

At Pratt, an existing boat launch area would get added parking space and improved pedestrian access, and an access site for kayaks would be added near the mouth of Paint Creek. The plan calls for extending the Paint Creek Rail Trail an additional 6 miles to connect with Mossy, in Fayette County, providing improved access to the trout stream.

At Handley, a new boat ramp would take shape. Upstream of Montgomery and the proposed Hatfield-McCoy Trail segment on Morris Creek, the South Rim Trail continues upstream past Mount Carbon/Deepwater to its northern terminus at Kanawha Falls.

The plan’s creators are hopeful the state Department of Transportation will reopen the bridge across the Kanawha between Glen Ferris and Kanawha Falls to at least foot and mountain bike traffic to provide a link between the two valley rim trails. The bridge was closed to vehicular traffic in November 2018.

With the rim trails and connector spurs in place, visitors “can travel from one adventure to the next, spending the day in the mountains before traveling back down to the river communities for the night,” according to the plan. “This creates a flexible system for tourists and allows them to customize their trip to the Upper Kanawha Valley in a way that best suits their desires.”

Cost estimates were not included in the plan.

The recent designation of the New River Gorge as a national park, the West Virginia Land Trust’s acquisition of the Mammoth Preserve and plans by the Hatfield-McCoy Trail system to develop a new trail system near Montgomery “make the timing perfect to get this plan implemented,” Salango said.

Development of The Valley would take place in phases, and would be financed through grants from federal agencies and programs, he said.

“It will take awhile to implement, so we want to get started as quickly as possible,” Salango said. “We will be reaching out soon to the Appalachian Regional Commission and other federal sources.”

Salango said the multi-layered plan is broad in scope and “outside the box,” but also very feasible.

“I think people from all over will come here to take advantage of what’s planned,” he said. “People love to get outside and into nature, especially in a beautiful area like this, with all the activities that are available. The Upper Kanawha Valley could become a real haven for outdoor enthusiasts.”

Those living in the area “have been devastated by the decline of coal, and could use some help in creating jobs and preserving businesses,” Salango said. “It’s time we stopped talking about making coal communities viable and started doing something.”

What is envisioned in the plan would also benefit everyone in Kanawha and neighboring counties, he said.

“People want things to do on a weekend and getting outside and active and enjoying nature is a wonderful option,” Salango said. “This will improve the quality of life for everyone, and give people thinking about moving here another another reason for doing so.”

Hygge in the hills: Danish concept is Appalachian way of life