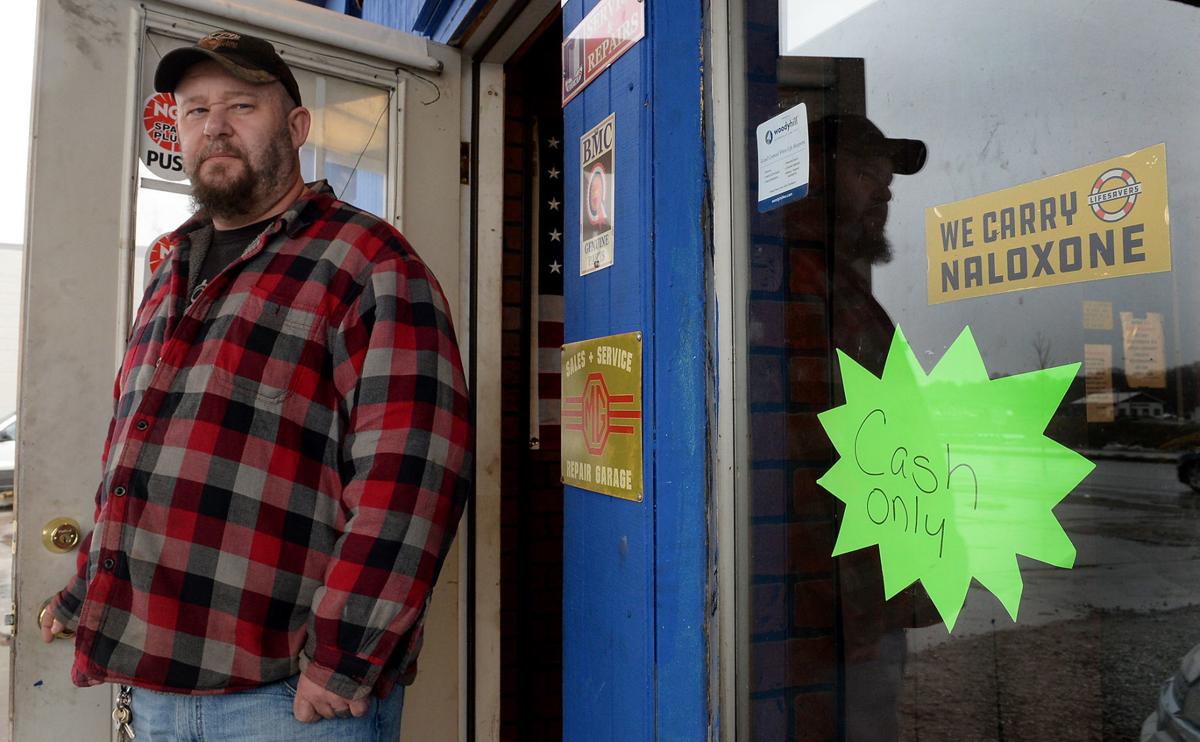 Dan Stewart, owner of Dan’s Auto Service on Kanawha Boulevard West, stands outside his shop. His business has carried the opioid-overdose antidote naloxone since last fall. 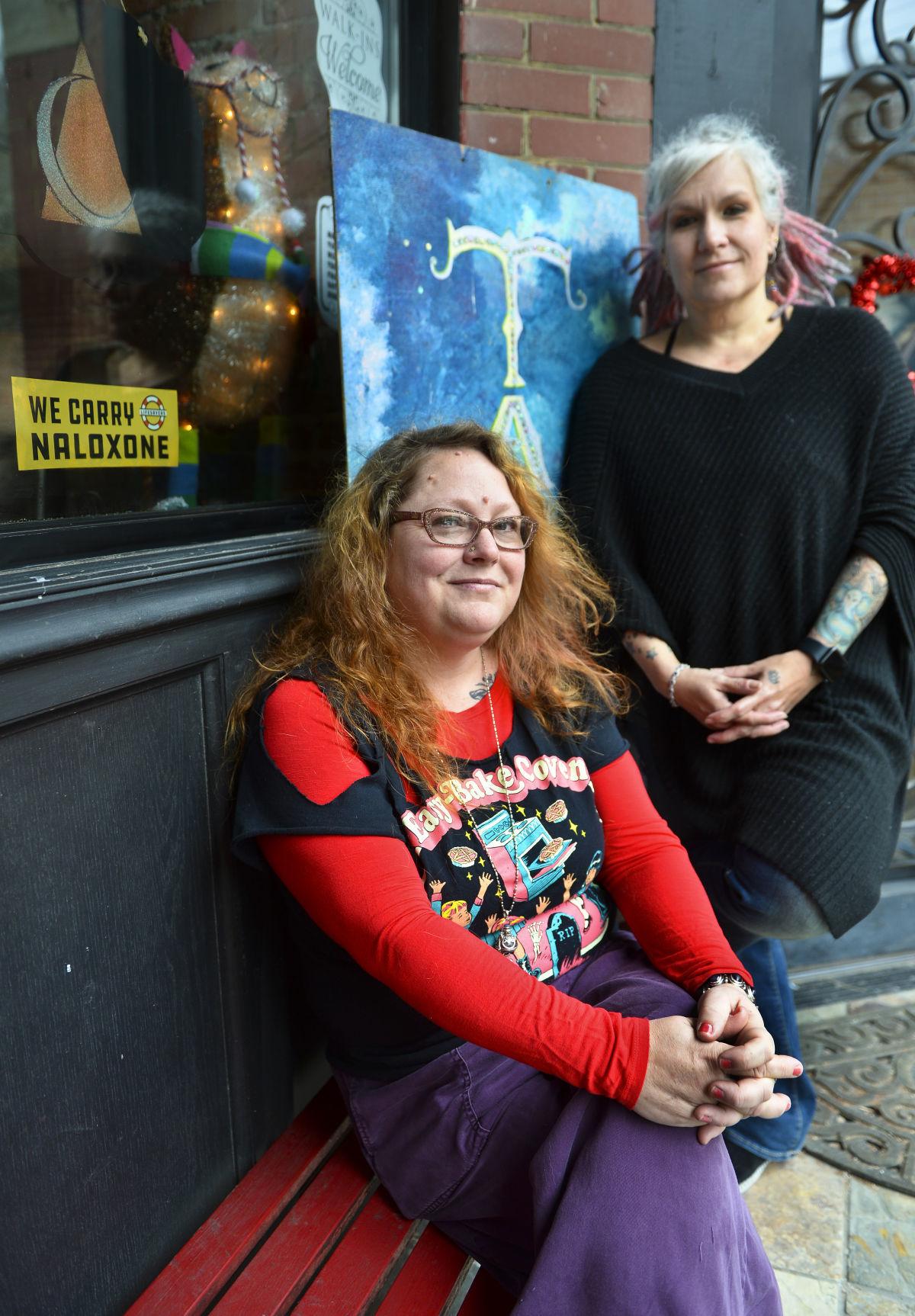 Gypsy Sisters Tattoo owners Teena Merlin (left) and Myra Wade sit near their naloxone sticker by the front door of the Madison business. 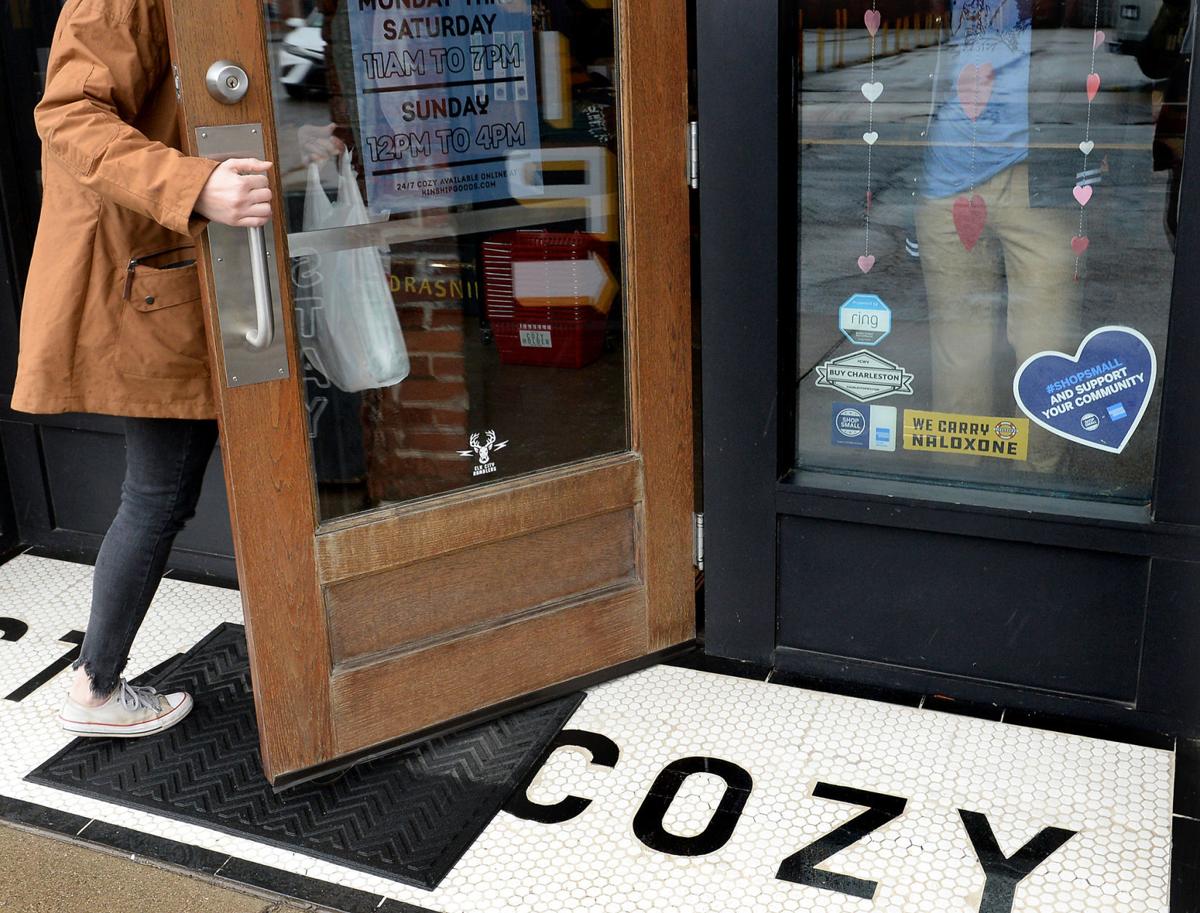 A sticker on the window of Kin Ship Goods says the store carries naloxone. 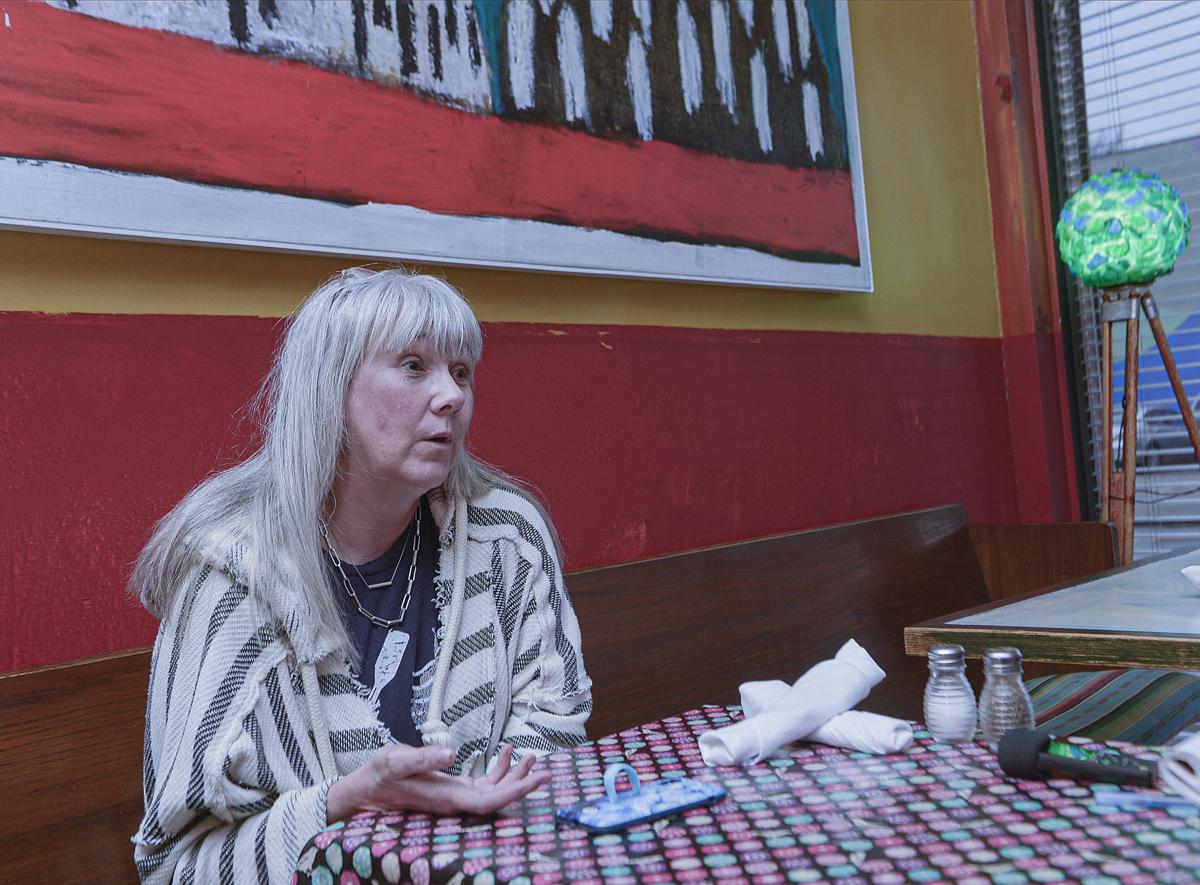 Keeley Steele sits inside Bluegrass Kitchen, one of several restaurants she owns in Charleston’s East End.

Dan Stewart, owner of Dan’s Auto Service on Kanawha Boulevard West, stands outside his shop. His business has carried the opioid-overdose antidote naloxone since last fall.

Gypsy Sisters Tattoo owners Teena Merlin (left) and Myra Wade sit near their naloxone sticker by the front door of the Madison business.

A sticker on the window of Kin Ship Goods says the store carries naloxone.

Keeley Steele sits inside Bluegrass Kitchen, one of several restaurants she owns in Charleston’s East End.

As the drug crisis continues to have a hold on cities and towns across West Virginia, dozens of businesses in Charleston and surrounding areas are stepping up to fill a harm reduction gap.

Through a program started last summer, nearly 50 businesses in the region now keep naloxone, a medication that counters the effects of opioid overdoses, on their premises. A yellow sticker in business windows signifies to patrons, “We Carry Naloxone.”

The program was started by the Charleston-based group Solutions Oriented Addiction Response, or SOAR. Joe Solomon, one of the group’s leaders, reported at an HIV Task Force meeting in December that, since SOAR began training businesses to use naloxone last summer, 18 people had been revived through the kits, which many keep in their onsite first aid kits.

“We’ve had it here since probably October,” said Dan Stewart, who owns Dan’s Auto Service off Kanawha Boulevard, on the West Side. “We haven’t had to use it, not yet, but I feel more secure knowing that if someone were in trouble, if they needed it, I can do more than just call an ambulance and wait.”

When members from SOAR were canvassing for businesses to participate last fall and walked into Stewart’s shop, he said it didn’t take a lot of convincing to get him to carry the life-saving medication.

He, like many, isn’t a stranger to the effects of the area’s drug epidemic. He said he regularly finds needles in the area around his shop. There’s an unlocked bathroom on the side of the building, open to whoever needs it, and he said he worries someone could one day overdose there.

Stewart said he has known at least eight people during his life who died due to fentanyl overdoses. He said his girlfriend’s sister was revived with naloxone once. It saved her life.

“You see all these folks out here all the time, and they need help, so we do what we can,” Stewart said. “This is our community, we’re going to help take care of people in any way we can.”

Businesses participating in the program span from hair salons and restaurants to churches, grocery stores and clothes shops. They’re on the West Side, the East End and in downtown Charleston. There’s also one, Gypsy Sisters Tattoo, in Madison, Boone County.

As the program gains traction, Brooke Parker, an organizer with SOAR who heads the effort to get naloxone in businesses, hopes to see more businesses from more places participate.

Business canvassing and outreach has been the most effective way to get businesses to participate. She and others organize every few weeks to target an area, and just walk business to business, speaking with owners and managers.

Sometimes there’s reluctance, other times there’s curiosity. To address the former, there are usually people in the group who are in recovery. They share stories about how naloxone had saved their lives at one time or another, and how it can do the same for people in need around them.

“Sharing those stories, I think that’s one of the things that helps us bridge a gap. They see, right in front of them, a human being who may not be there if it weren’t for this thing we’re trying to tell them about,” Parker said. “That’s been most effective — just engaging with people and their businesses, and walking together to the next steps.”

If a business is convinced, there will be a followup meeting where staff are trained to administer naloxone. There’s a PowerPoint presentation that educates on how the drug works and debunks some myths that surround it. Among those:

These, Parker said, are the most frequent questions — and they can be answered with ease. West Virginia’s Good Samaritan law ensures the first two don’t happen, and the way the drug works — by specifically targeting opioid receptors — makes it completely ineffective in a body without opioids.

When those questions are asked, though, Parker said it’s rewarding — it means those asking them are engaging with the information and willing to hear something new.

“When I started here, I was most curious about the backlash we were going to potentially get, but I’ve been surprised. We’re working toward something better, and people want to be a part of that, even if some don’t understand it or aren’t on the same page yet,” Parker said. “So much of this is education, the more people know, the fewer reservations they have.”

One of SOAR’s goals with this program is to fight the stigma that surrounds naloxone. Some see the medication as a way to enable people who use drugs, but that’s not what it is, Parker said: “It’s a way to save a life, give a second chance. Who among us hasn’t needed a second chance?”

For Teena Merlin, co-owner of Gypsy Sisters Tattoo, in Madison, having the yellow sticker in her window has been a way to start a community conversation.

“It’s not always positive, but it’s coming up and people are becoming more familiar, I think, with what naloxone is and what it can do,” Merlin said. “There’s been intrigue and questions, but if we can get to the point that people are saying something normal about it, that’s progress.”

Before opening Gypsy Sisters with Myra Wade last year, Merlin worked with veterans who suffered from substance abuse disorder. Carrying naloxone, she said, seemed like an obvious thing to do.

“There was a need, and I saw an opportunity to fill that need,” Merlin said. “There wasn’t much other thought to go into it — I can potentially help people with this, so OK, let’s do it.”

Kin Ship Goods was one of the first businesses to adopt the program. Co-owner Hillary Harrison saw it as a “no-brainer.”

“Why in the world would I say no? I mean, if someone gave us epipens for free I’d carry them behind the counter, but I don’t know of a program that provides that,” she laughed.

Like Merlin, she sees the opportunity to normalize naloxone through talking about it.

Harrison’s younger brother suffers from addiction. He’s in recovery, but before he got there he was revived by naloxone, administered by strangers, several times. When he was in active addiction, she experienced first-hand the difficulty some in her family had talking about it.

“It’s something we have to talk about though — all of us. I think everyone knows someone who has been affected by addiction, so we need to start moving a conversation forward,” Harrison said. “Keeping quiet, pretending it’s not happening helps no one — especially when there are small things we can do, like carrying [naloxone].”

Steele is realistic about the effects of the opioid epidemic on the city: “It’s out your door, it’s at businesses, it’s in front of all of us.”

And it’s been like that for a while, she said. It’s also going to take a long time until that’s not the case. In the meantime, however, she sees carrying naloxone on site as an easy way to help if it’s ever needed. And for those who opt not to, they can help in other ways, like supporting employees who are in recovery or caring for someone who is.

“The face of the drug epidemic has changed, the drugs have changed, but we’re still here,” Steele said. “I think it’s our duty. It’s our duty to do what we can, and I don’t know why someone would want to stand over someone and watch them die.”

Steele said she doesn’t believe there’s an overwhelming sense that the drug epidemic, no matter what form it may take, is going to take down the city of Charleston.

Now, she said, the challenge is figuring out how to grow and improve the city while also caring for the vulnerable who are suffering.