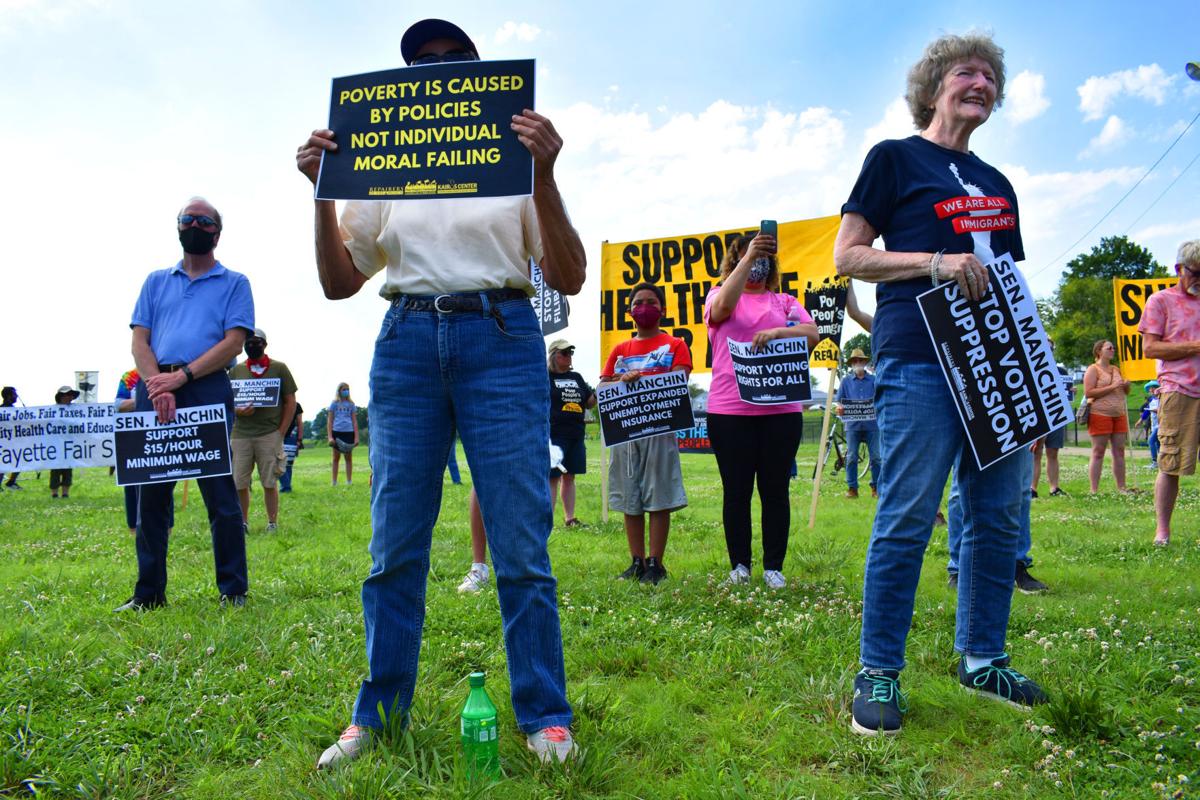 March attendees stand in the grass at Magic Island in Charleston, watching from the crowd as speakers take turns calling on Sen. Joe Manchin to vote for the For the People Act. 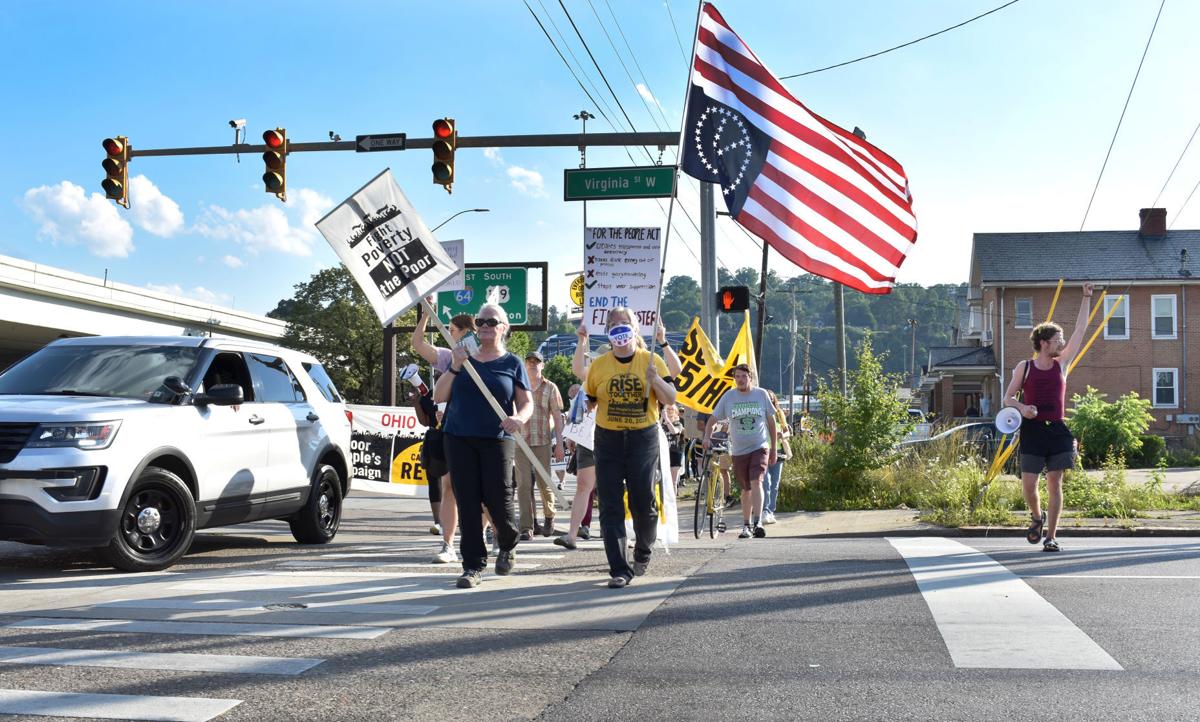 Members of the public walk through an intersection at Virginia Street West and Pennsylvania Avenue in Charleston Monday evening during the march. 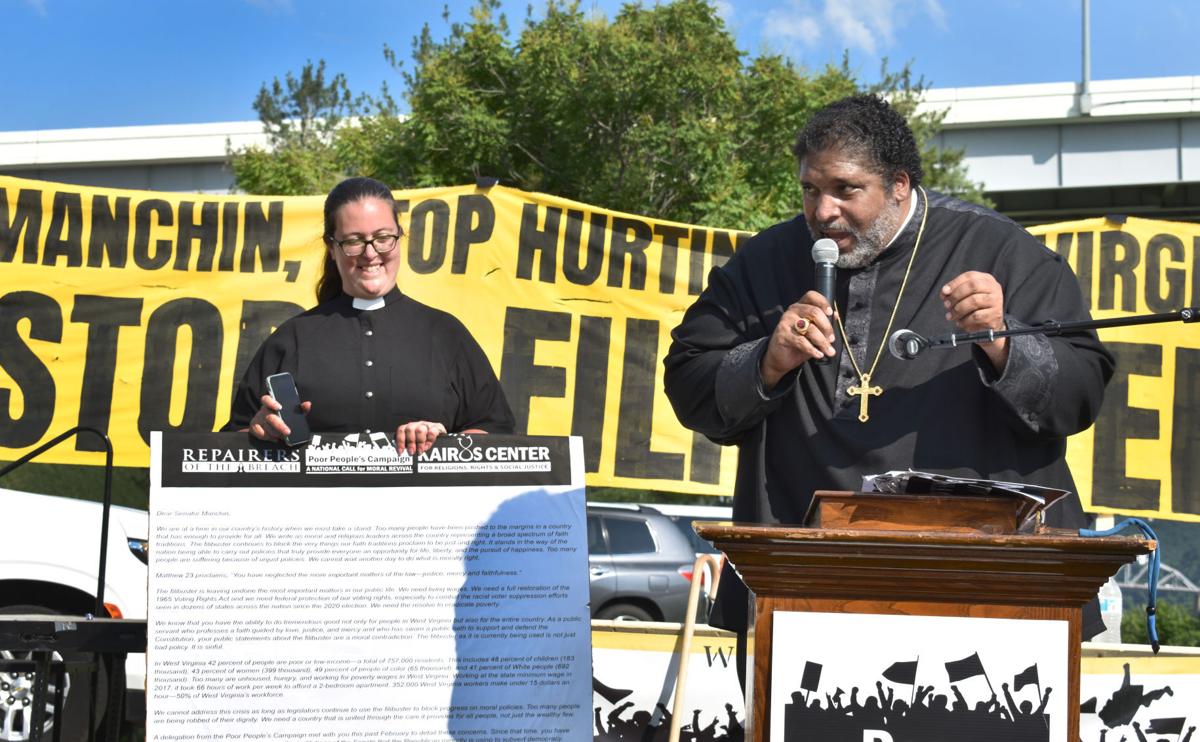 The Revs. Liz Theoharis and William Barber II, of the Poor People’s Campaign, speak to the crowd Monday at Magic Island in Charleston. 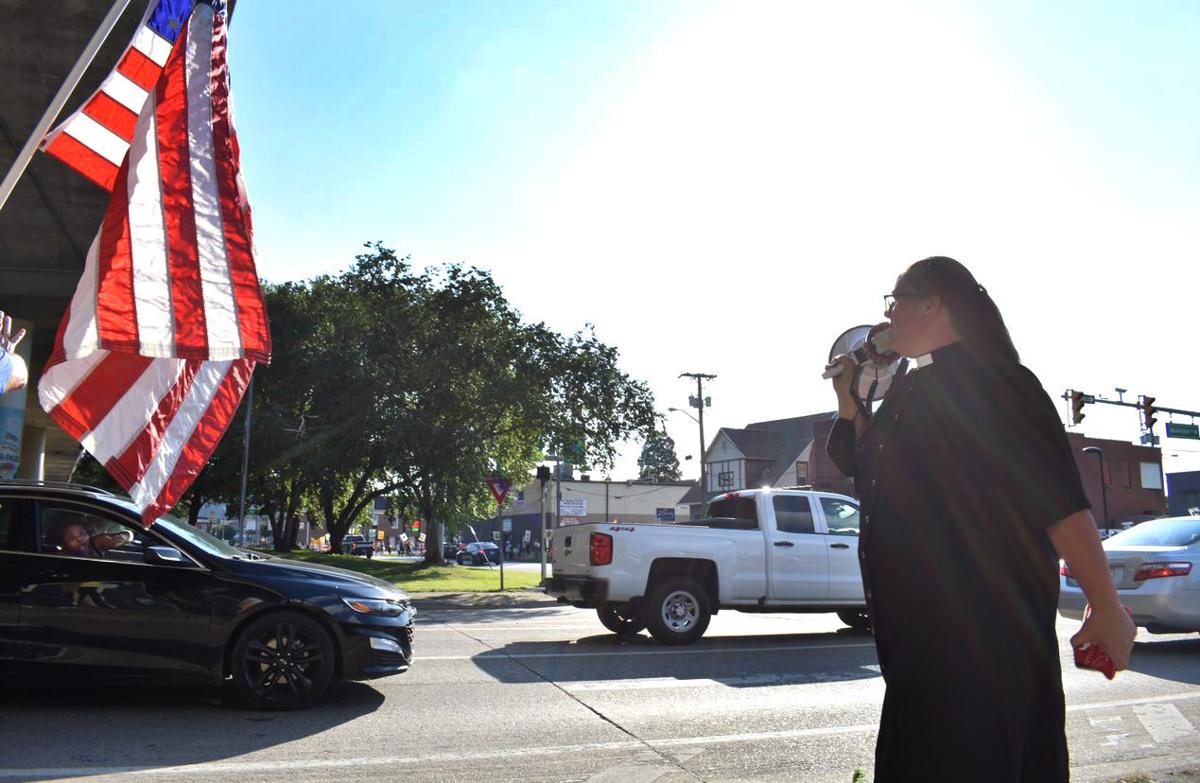 Rev. Liz Theoharis, co-chairperson of the Poor People's Campaign, walks along Washington Street as the crowd follows behind. 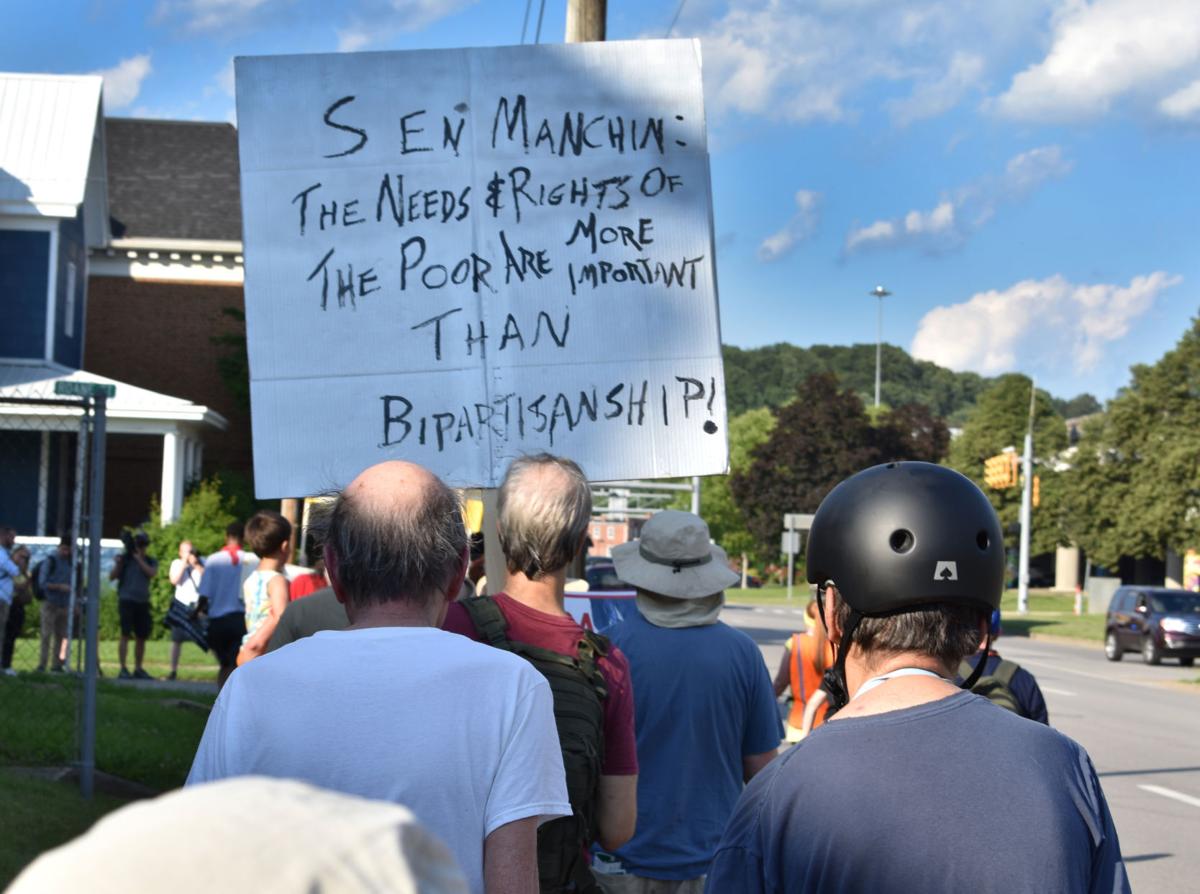 A man holds a sign during the march calling on Sen. Joe Manchin to drop his push for bipartisanship. 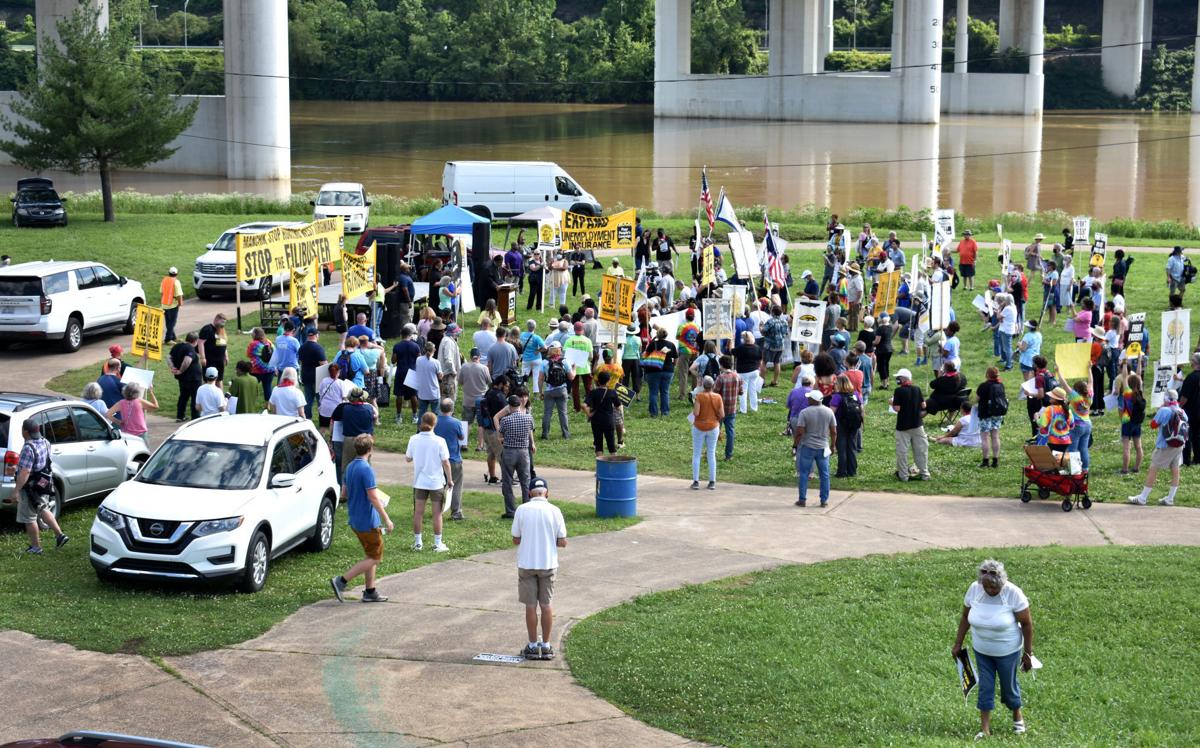 Crowd members listen to Rev. William Barber's moral plea on Monday for Sen. Joe Manchin to pass the For the People Act and end the filibuster. 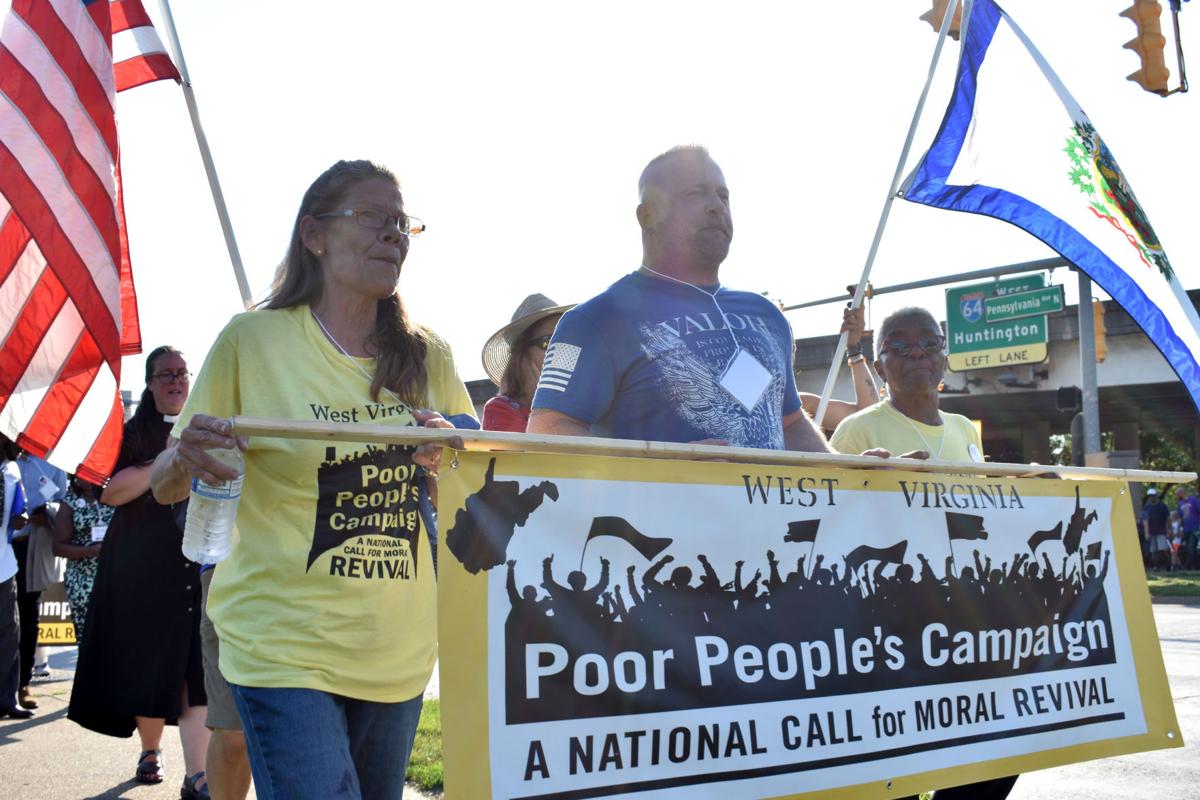 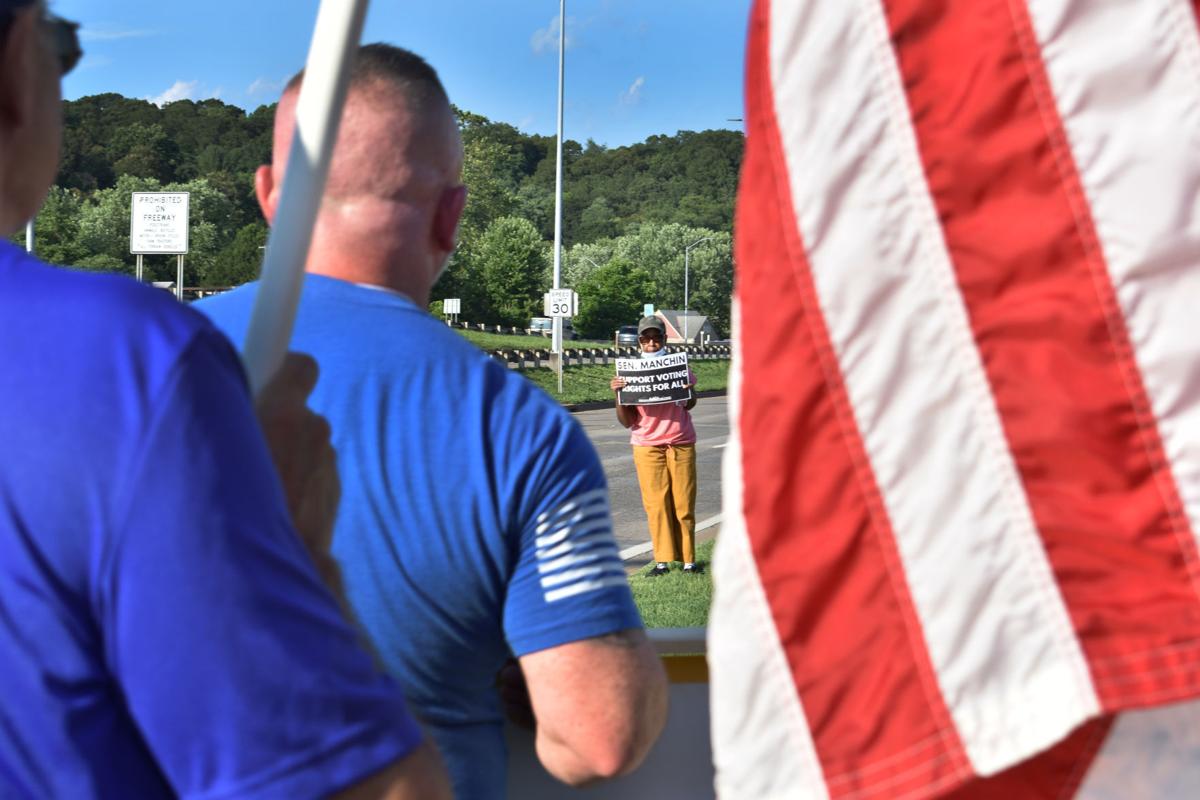 A woman holds up a sign calling on Sen. Joe Manchin to support voting rights.

March attendees stand in the grass at Magic Island in Charleston, watching from the crowd as speakers take turns calling on Sen. Joe Manchin to vote for the For the People Act.

Members of the public walk through an intersection at Virginia Street West and Pennsylvania Avenue in Charleston Monday evening during the march.

The Revs. Liz Theoharis and William Barber II, of the Poor People’s Campaign, speak to the crowd Monday at Magic Island in Charleston.

Rev. Liz Theoharis, co-chairperson of the Poor People's Campaign, walks along Washington Street as the crowd follows behind.

A man holds a sign during the march calling on Sen. Joe Manchin to drop his push for bipartisanship.

Crowd members listen to Rev. William Barber's moral plea on Monday for Sen. Joe Manchin to pass the For the People Act and end the filibuster.

A woman holds up a sign calling on Sen. Joe Manchin to support voting rights.

More than 300 people gathered Monday in downtown Charleston to call on Sen. Joe Manchin, D-W.Va., to support a landmark elections overhaul and voting rights bill and to reverse his position on several policies to help people in poverty.

Local and national organizations have ramped up efforts to sway the senator since he announced his opposition to the For the People Act, the Democrats’ signature piece of federal legislation this session. The Poor People’s Campaign: A National Call for Moral Revival, led by co-chairs the Rev. William Barber II and the Rev. Liz Theoharis, returned to Charleston to join West Virginians in protest and to pressure Manchin on his home turf. The organization has made its presence felt in the Mountain State since Manchin’s ascension into the national spotlight five months ago.

West Virginians made their strongest and loudest statement yet Monday evening, holding a speaking event at Magic Island before marching to Manchin’s Charleston office inside the West Virginia Lottery building. Dubbed the “Moral March on Manchin,” West Virginians and members of the Poor People’s Campaign made their moral pitch to Manchin to support the For the People Act.

Faith leaders led the way, asking God to reach Manchin because the people have not been able to.

“God has elevated you to put you in this place for such a time as this — to save this nation and to save this democracy,” said the Rev. Matthew Watts, senior pastor at Grace Bible Church, on Charleston’s West Side.

Before his speech, Watts said Manchin’s opposition to the For the People Act fails to consider the consequences of inaction on protecting voting rights.

“I think the threat to our democracy is really voter suppression, denying people access to the ballot,” Watts said. “I believe this can bring about healing to our nation, not divide it.”

Martec Washington, a West Side native and current resident, asked those in the crowd to bow their heads in prayer, and then began speaking.

“God, if you could just remind Senator Joe Manchin that his communities, the people that voted for him, we’re being left behind,” Washington said. “Our homes are crumbling. People are dying. People’s pockets are empty. People’s hope is deflated. All we have is prayer and love, and the love’s not coming from the people that we elected, Lord.”

Washington’s neighborhood has the 27th-lowest life expectancy of any neighborhood in the United States, according to Census data. The poverty rate is 37%, more than double the statewide average. He’s not giving up hope, Washington said, but God had better point Manchin in the right direction soon.

“So, I don’t know what to do anymore but pray, and I’m hoping that you change his heart and change his mind,” Washington said in his prayer.

The Rev. David Fryson, senior pastor of the New First Baptist Church of Kanawha City, said West Virginians showed up to the event to provide a counter-narrative to national news media reporting of Manchin’s home state. The Black community has long been a driver behind Manchin’s success in politics, Fryson said, and that’s still the case today.

“The national press keeps saying, ‘Well, Manchin is in no peril because there are no people of color here.’ Well, the truth of the matter is, if you look at his margin of victory ... it was the African American community that turned out in Charleston, Huntington, Beckley and Morgantown to really bring him over,” Fryson said.

West Virginia’s estimated Black population at the time of Manchin’s Senate race in 2018 — nearly 65,000 — more than tripled Manchin’s margin of victory — 19,397. Speakers throughout the event said Manchin wouldn’t be in office today had the tens of thousands of Black voters stayed home. Fryson said Black people still voted for the conservative Democrat not on the promise that he’d be a progressive champion, but that he’d uphold the moral conscience of the party, fighting poverty and attacks on democracy head-on.

“We’re not asking him to be a liberal Democrat,” Fryson said. “We just want him to be a Democrat.”

The Rev. Marlon Collins, senior pastor at Shiloh Baptist Church, in Charleston, said the For the People Act, a $15 minimum wage and killing the filibuster are not just the wishes of bleeding-heart liberals. These are policies that can preserve democracy, he said, and Manchin’s opposition shows where he stands on the concerns of the people.

Pam Garrison and Jean Evansmore, leaders in the West Virginia chapter of the Poor People’s Campaign, led the march to Manchin’s office. In between them walked former Democrat state senator and congressional candidate Richard Ojeda. Manchin took Ojeda as his guest of honor to the 2013 State of the Union, thanking him for his activism in his home of Logan County after returning from more than two decades of military service. But on Monday, Ojeda said he can’t support the senator’s recent actions.

“The For the People Act is not anything people should be fist-fighting over,” Ojeda said. “This is something everybody should be for.”

After arriving at the Lottery building, with Manchin’s office closed, supporters taped letters addressed to Manchin to the door and signed their names. Members of Manchin’s staff came outside to greet and address demonstrators’ concerns, but Barber said they weren’t there to speak with Manchin’s staff. They wanted the man himself.

A spokesperson for Manchin provided a statement on his absence in Charleston for the event: “Senator Manchin is in Washington because the Senate is in session. His staff [was] at the march to listen to these important voices and relay their concerns to him.”

Along the march route and at the event, West Virginians poked holes in Manchin’s arguments against the For the People Act and upholding the filibuster. They also wondered why the senator is continuing his efforts to please Senate Republicans, who they said abandoned efforts to help poor people and save democracy long ago.

“West Virginians don’t care about bipartisanship. Bipartisanship doesn’t feed us,” said Kaylen Barker, of South Charleston. “It doesn’t give us job opportunities. It doesn’t protect our rights. We want [Congress] to do right by us and make sure we have economic opportunity and that our rights are being protected and our families don’t go hungry.”

“I think he’s been getting horrible information and he needs to be told the truth, that the filibuster is a racist anachronism from a vicious past,” Kincaid said. “This is a seminal moment for his legacy. He can either stand for democracy or stand for the racist anachronism.”

Sue Julian, of Pinch, said Manchin is not representing the people who elected him.

“We voted him in to represent our needs,” Julian said. “We need for him to stop blocking federal legislation.”

Barber, from North Carolina, said he was in Charleston on Monday partially on behalf of his late grandfather, a West Virginia coal miner — but he was mainly here for the West Virginians who called for the organization to continue making noise in Manchin’s backyard. Change isn’t going to start in Washington, D.C., he said. Change will begin in the streets of Charleston.

These are not concerns of only Black people, Barber said, these are the moral pleas of all people committed to upholding democracy.

“We need to understand that, when you attack voting rights, it’s not just a Black issue. Race is a part of it, but so is class,” he said. “What extremists are doing in state legislatures is hurting all of us.”

Voter bills in Georgia and Texas have dominated local and national headlines in recent weeks. From January to May 2021, 14 states have enacted 22 laws that restrict ballot access, according to the nonpartisan Brennan Center for Justice.

Barber, along with national civil rights leaders, has told Manchin that advancing the John R. Lewis Voting Rights Advancement Act won’t be enough to stop these kinds of bills and the assault on voting rights altogether. Manchin has called on Congress to pass this bill.

Barber also called out recent financial support to Manchin by organizations linked to the U.S. Chamber of Commerce and billionaire Charles Koch. He asked who Manchin is really working for.

Now, six months into the session of the 117th Congress — where a 50-50 Senate is guaranteed only by the good health of 100 individuals — West Virginians can expect to see Barber, Theoharis and company back in these mountains soon.

“West Virginia will be heard. We are nonviolent, but we ain’t playing. We will fight for the soul of this democracy,” Barber said. “You just picked the wrong fight with the wrong people, because we’re going to fight until hell freezes over, and then fight on the ice.”