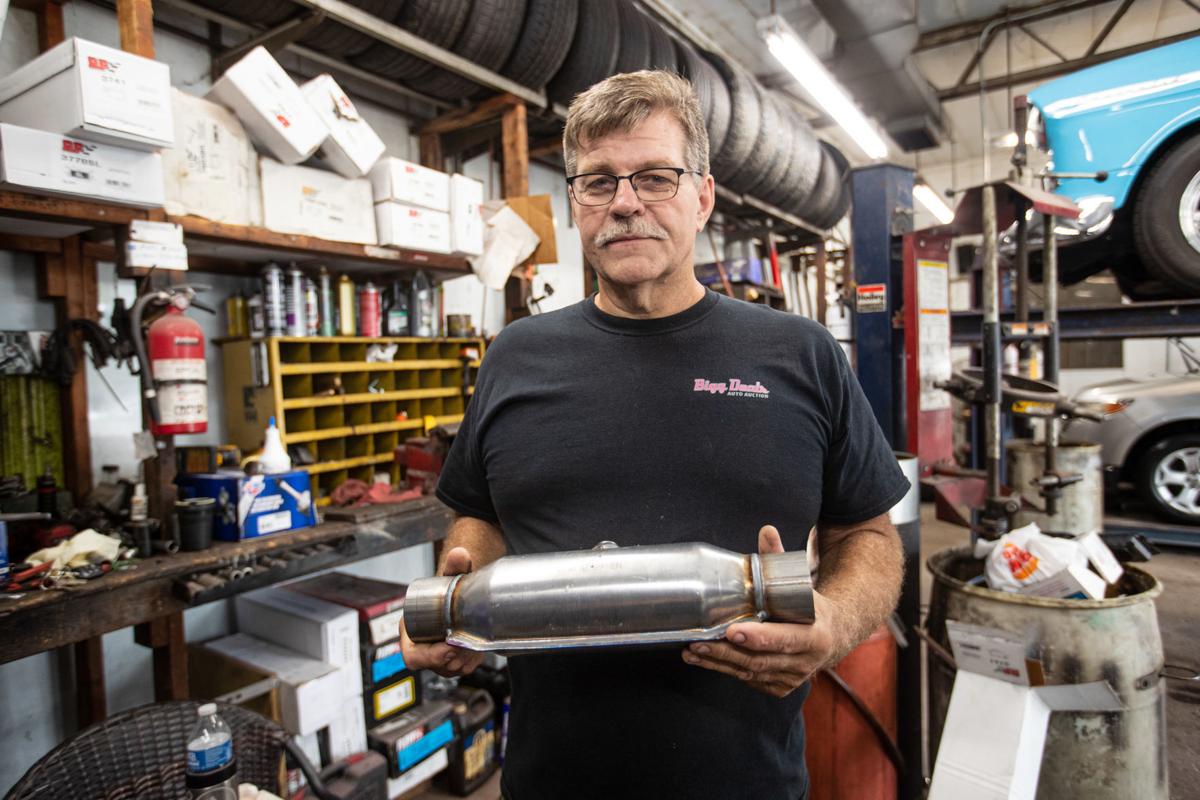 Lyndon McColgan, owner of Muffler America, holds a replacement catalytic converter Saturday in Huntington. Catalytic converter theft reports to insurance companies and police have skyrocketed in the past year. 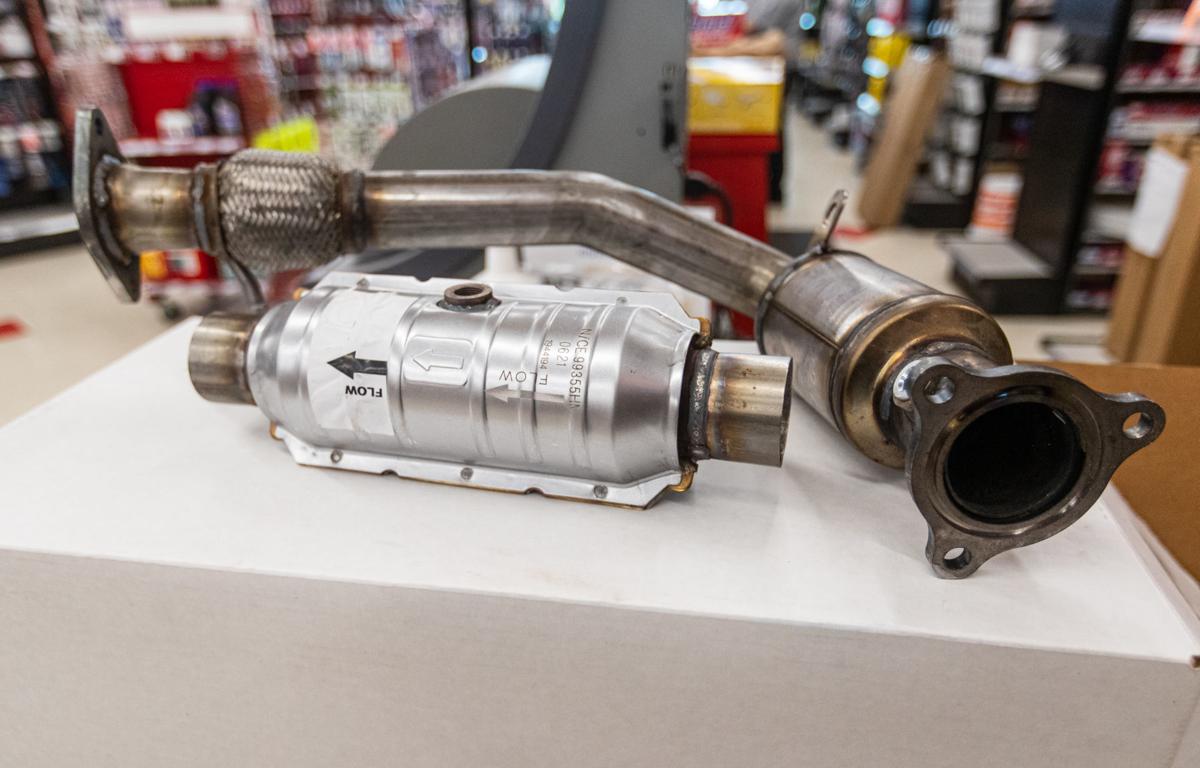 A replacement catalytic converter is seen on Saturday, Sept. 25, 2021, in Huntington. Catalytic converter theft reports to insurance and police have skyrocketed in the past year, and a Cabell County deputy said the only way to protect residents is to change laws. 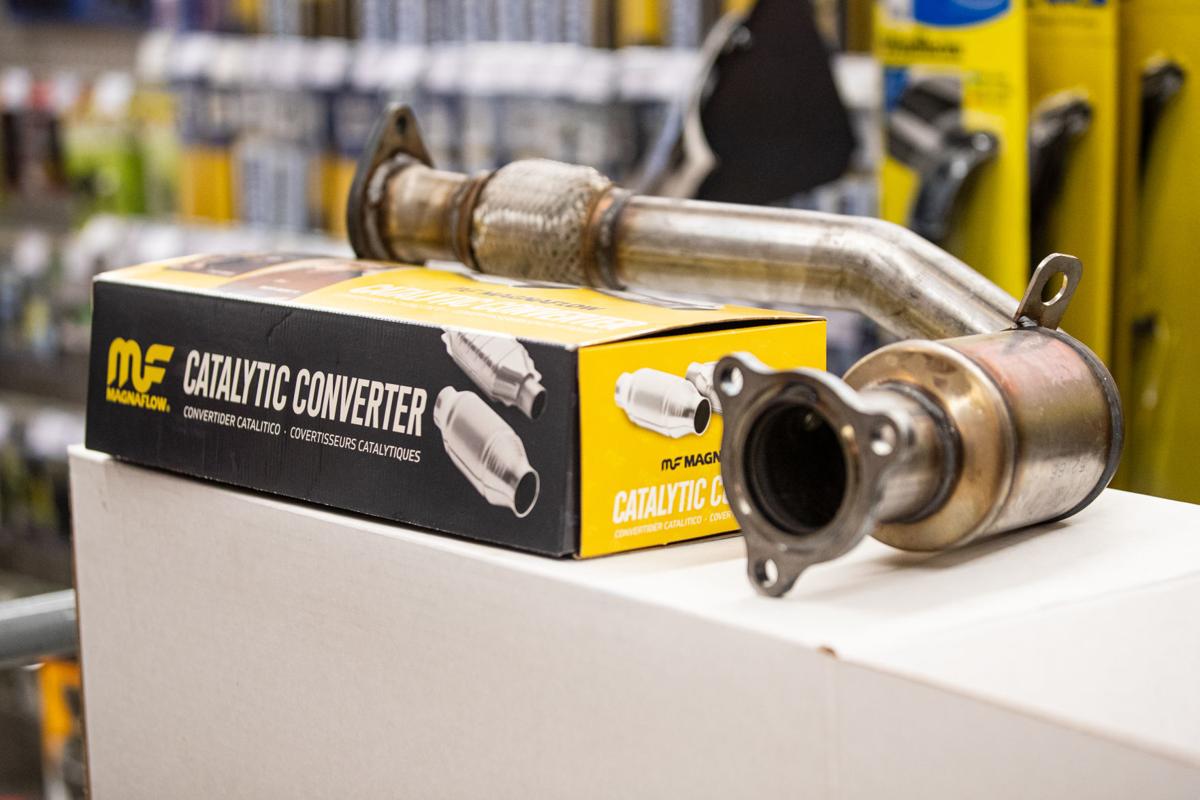 A replacement catalytic converter is seen on Saturday, Sept. 25, 2021, in Huntington. 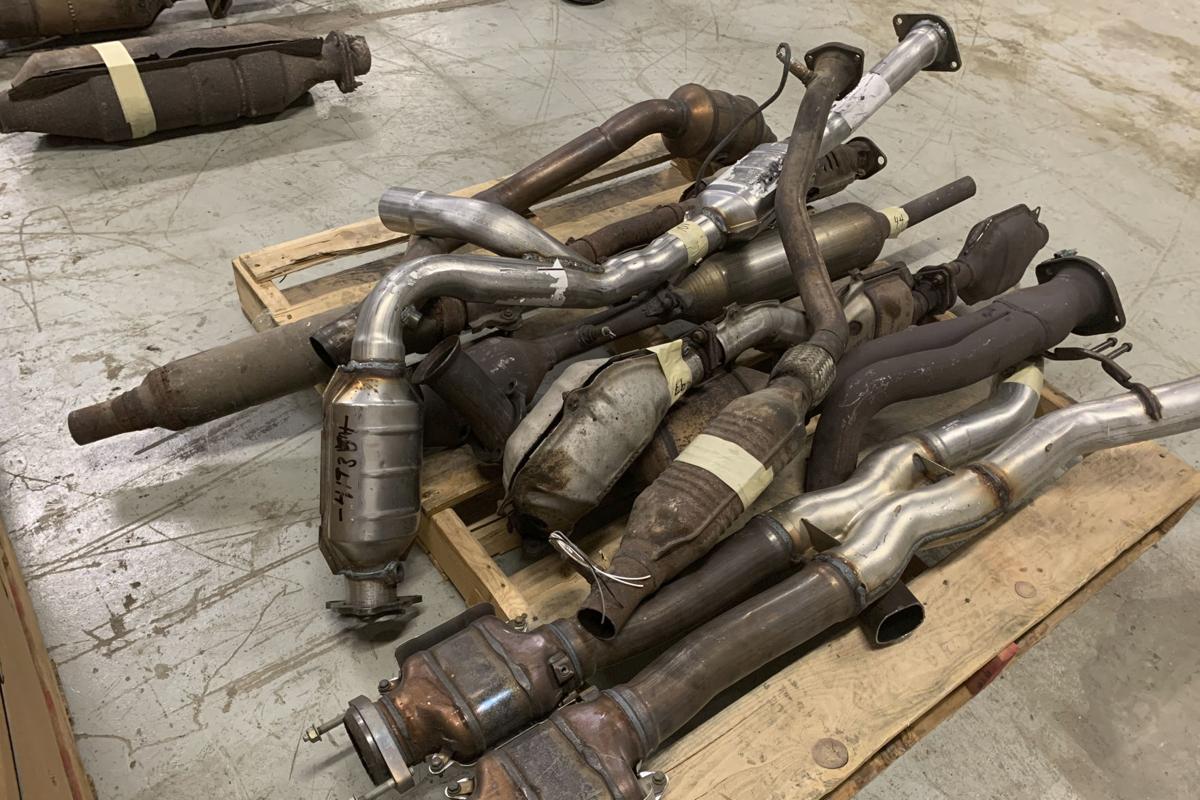 In this undated photo provided by the Utah Attorney General’s Office, catalytic converters are shown after being seized in a recent investigation.

Lyndon McColgan, owner of Muffler America, holds a replacement catalytic converter Saturday in Huntington. Catalytic converter theft reports to insurance companies and police have skyrocketed in the past year.

A replacement catalytic converter is seen on Saturday, Sept. 25, 2021, in Huntington. Catalytic converter theft reports to insurance and police have skyrocketed in the past year, and a Cabell County deputy said the only way to protect residents is to change laws.

A replacement catalytic converter is seen on Saturday, Sept. 25, 2021, in Huntington.

In this undated photo provided by the Utah Attorney General’s Office, catalytic converters are shown after being seized in a recent investigation.

HUNTINGTON — A national and local trend of catalytic converter thefts has cost residents, businesses and insurance agencies millions of dollars in the past year, along with countless hours of annoyance for people who don’t have many ways to protect themselves.

Catalytic converters are part of the exhaust system of a vehicle, required in the United States since 1975, and help reduce the amount of pollution emitted by the exhaust system. Within the converter are metals — such as platinum, palladium or rhodium — worth several hundred to thousands of dollars.

The rise in price of those metals, combined with the ease of removing the converters, have caused a rise in their thefts. Thieves remove the metals from the converter and sell them for hundreds of dollars in profits.

Last week, police in Mesa, Arizona, arrested six people who allegedly were stealing catalytic converters and selling them to undercover officers for up to $500 each, authorities said. In New York, a man died when a car fell onto him after he jacked it up to steal a converter.

These thefts have strained resources for local law enforcement and left residents annoyed. Local investigators bombarded by the rise in cases say the only way to fix the issue is by changing laws at the state and federal levels.

Detective Michael Hatfield joined the Cabell County Sheriff’s Department detective bureau in June 2020. He said that, before taking the job, he knew very little about converters, other than of their existence. Early last year, he noticed that the department had been taking a lot of converter theft calls.

Since the start of 2021, there have been 400 larceny calls taken by the sheriff’s department, 265 of which were related to converters.

Stealing converters is appealing because it can take less than a minute to cut the apparatus off, and it yields the thief thousands of dollars. It’s hard to investigate the cases, Hatfield said, because you cannot track the converter to the particular vehicle from which it was stolen.

An auto dealership just off 16th Street Road, in Huntington, has been hit the hardest, estimating over $100,000 in damages from converter thefts. While interviewing an employee of the dealership, Hatfield was told they previously had to replace about one converter in a decade at the lot because the parts are made to last the life of a vehicle.

“So, when you have a normal person taking in three, four converters every two, three days, that puts them as a person of interest for us and we need to make contact with that person,” he said. “But, at the same time, if we don’t catch them cutting it, we really can’t trace it.”

From mall parking lots to personal driveways, no vehicle is safe from having its converter cut off, causing an inconvenience for owners, many of whom are living paycheck to paycheck.

Isaiah Johnson, 22, of Huntington, said that, a couple of weeks ago, he experienced the nuisance of having his converter cut off.

“I had blown a tire and had to leave my car on the side of the road down near the hospital,” he said. “I came down the next day, and my whole catalytic converter had been taken off.”

Johnson said the assailants lifted his car using a jack, cut the converter off and left the jack behind before fleeing.

“My car isn’t nice,” he said. “It’s not something you look at and you’re like, ‘I want to steal something out of that.’ ”

Even with choosing against purchasing a replacement converter for thousands of dollars, it still cost Johnson a couple-hundred dollars to make his vehicle drivable.

At his age, he said, he doesn’t have the emergency funds to put thousands of dollars into a 20-year-old vehicle.

His story is similar to that of hundreds of West Virginians who live in a state where many residents live paycheck to paycheck.

Insurers are taking a hit

It’s not just the converter that has to be replaced, Hatfield said. Damage can be done by careless actions and that, sometimes, the entire exhaust system needs to be replaced.

Add labor, and the final bill can be in the thousands of dollars. He said he has seen a truck with $6,500 in damages.

Hatfield said law enforcement works with the West Virginia secretary of state and tax offices, which also investigate the cases for tax fraud and other possible crimes. They have found that a lot of people have not been paying taxes owed for the sales.

State government passed laws this year that recycling centers must hold converters for 14 days before selling them to a refinery, but without the ability to track the converters to cars, it is useless, Hatfield said.

For a department already stretched thin, the hours it takes to find video surveillance, interview witnesses and investigate requires a lot of resources for law enforcement.

Those investigations sometimes lead to Ohio and Kentucky, which cross jurisdictions, Hatfield said.

“If we don’t get something to lead us in the direction of the [thief], then we have to rely on what we do have in place,” he said. “That leads us to people who take metal in for scrap, and that’s just the ones that are taking them to legal scrap dealers.”

Hatfield said that, for the most part, recycling centers and similar businesses comply with laws.

He said that, during an investigation of a single recycling center, they reviewed about $25 million or $27 million in sales and speculated 92% of that was accounted for by converter sales. It’s suspicious, but proving illegal activity is hard.

For the most part, it’s illegal businesses causing the issues.

“We have issues with people from out of state coming in and purchasing the converters,” he said. “They’ll put out on, like, Facebook that they’re going to be in an area buying converters.”

Hatfield estimated that nine out-of-state converter buyers have been coming into the state every day to do business.

State Farm said vehicles should be parked inside a garage or well-lit area, preferably with a security camera pointing at the car, to prevent theft. The company also suggests making sure your auto insurance policy covers the theft of vehicle parts.

Otherwise, everyone is vulnerable.

Hatfield said that is not enough. He thinks West Virginia’s lawmakers should follow other Southern states that have made it illegal for a civilian to sell a converter.

“Everything we’ve got in place still isn’t enough. It needs to be more, or it’s going to continue,” he said. “As the price increases, it’s just going to get worse. It’s not going away, not until legislation gets passed.”

If only businesses could sell converters to recycling centers, it would narrow down the places law enforcement officers would need to investigate and the amount of theft in general, Hatfield said.