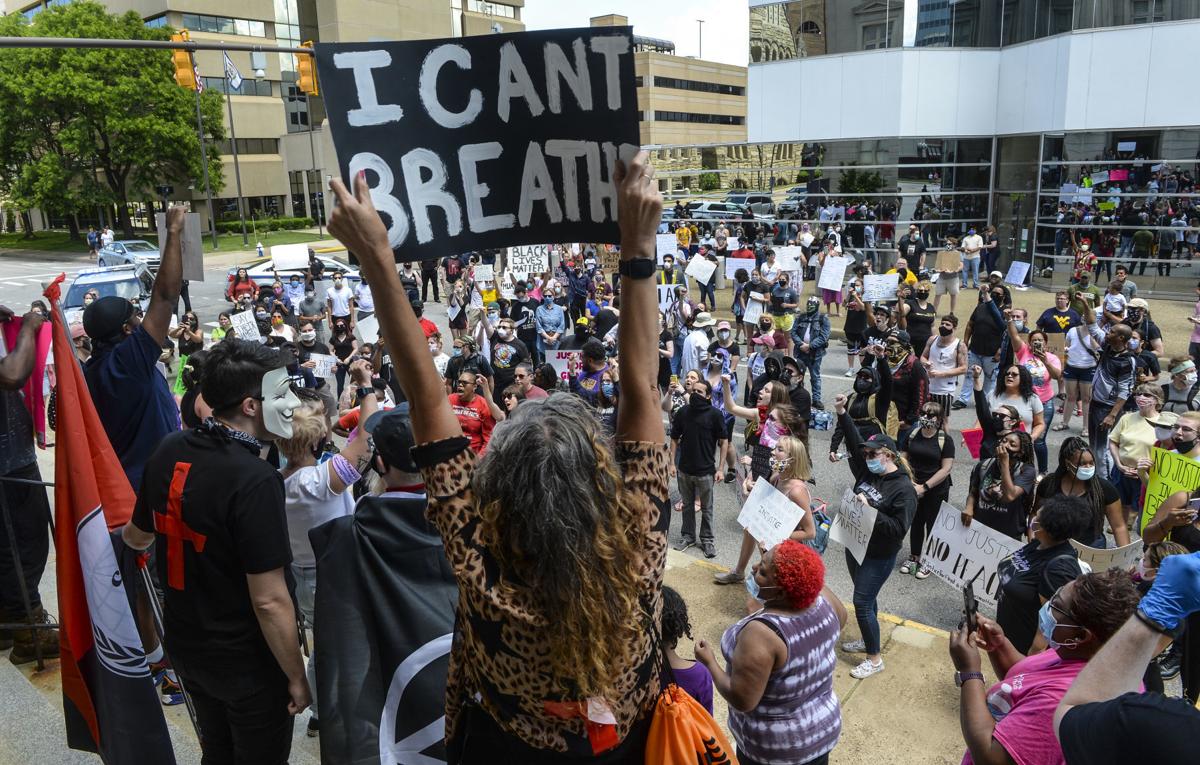 Protesters chant “I can’t breathe” at a rally at Charleston’s City Hall Sunday seeking justice for George Floyd and others killed by police. Floyd died Monday after being pinned to the ground by four Minneapolis police officers, including one who held his knee to Floyd’s neck for several minutes. That officer has been charged with murder in Floyd’s death. 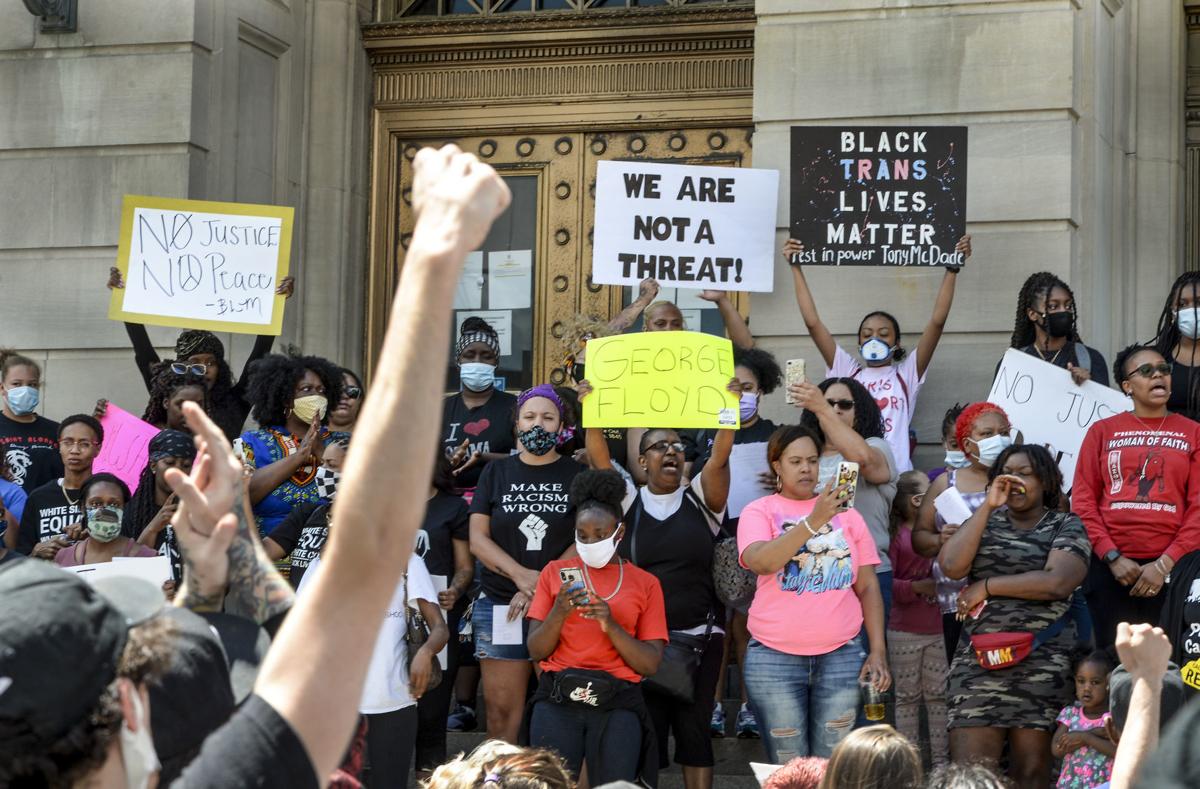 Supporters of George Floyd chant his name outside of Charleston’s City Hall Sunday. A few hundred people showed up for the second rally in as many days in Charleston. 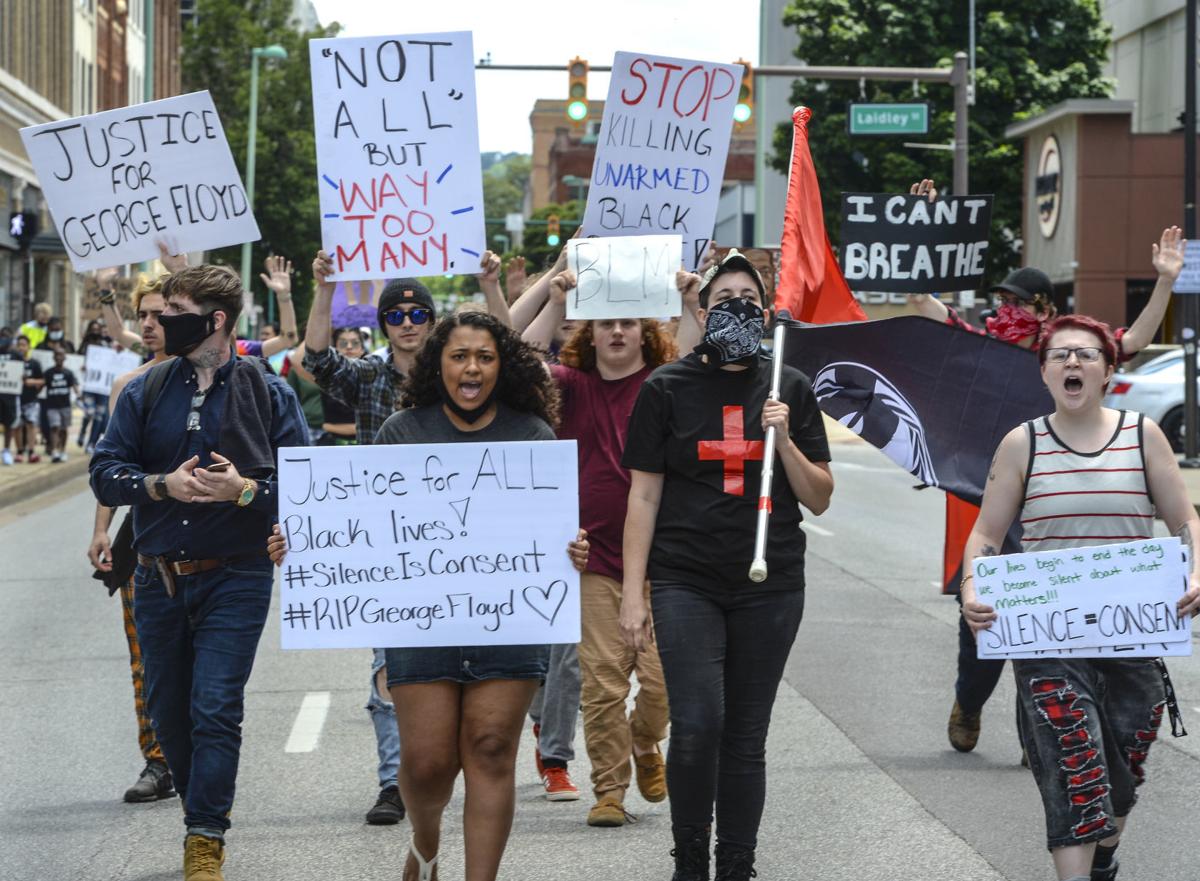 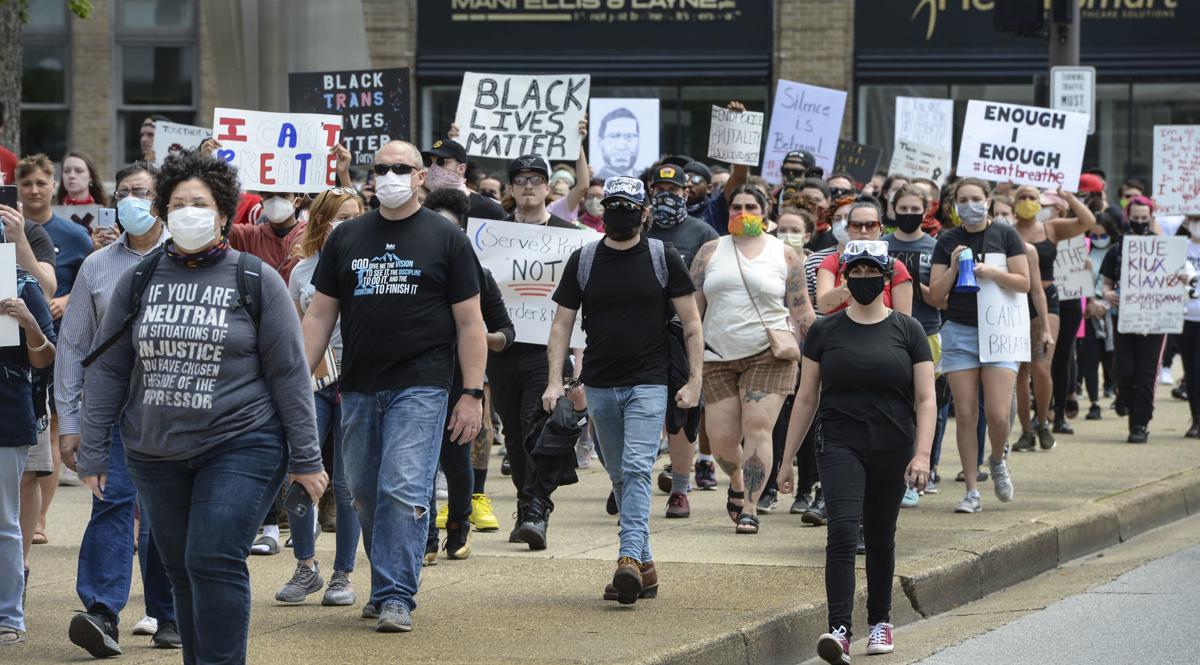 Protesters chant “I can’t breathe” at a rally at Charleston’s City Hall Sunday seeking justice for George Floyd and others killed by police. Floyd died Monday after being pinned to the ground by four Minneapolis police officers, including one who held his knee to Floyd’s neck for several minutes. That officer has been charged with murder in Floyd’s death.

Supporters of George Floyd chant his name outside of Charleston’s City Hall Sunday. A few hundred people showed up for the second rally in as many days in Charleston.

A crowd that at one point totaled roughly 300 gathered on and around the steps of Charleston City Hall on Sunday, chanting the names of George Floyd and other African Americans before him whom police killed.

The black Charlestonian’s voice broke with almost every line.

The crowd gave shouts of “I can’t breathe,” words that were among the last spoken by both Floyd and Eric Garner, who killed in 2014 by a New York City police officer.

Also among Sunday afternoon’s chants were “Black lives matter,” “Say their names,” “No justice, no peace,” “Whose streets? Our streets,” “Prosecute the police” and “Silence is consent.”

Protests have erupted in cities across the country, including Minneapolis, where Floyd was killed; Columbus, Ohio; Louisville, Kentucky; Washington, D.C.; and Los Angeles.

Some protests have included damaging storefronts, setting fires and other property destruction.

Charleston hasn’t seen that. But the event, which began at noon and only began to disperse around 3 p.m., included speakers railing against police violence.

Brandon Davis, who is black, told the crowd of white people and black people that he grew up on Charleston’s West Side.

“There’s been times where I’ve been shot at, there’s been times I’ve been stabbed. Police came. You know what they said? ‘What did you do to have them do this to you?’ Not ‘Oh, do you need help?’ I’m tired, I’m f---ing tired. I’m tired of seeing everybody sit here and just be complacent about this s--t.”

He said that after centuries of white people burning places that black people cherished, “y’all want to sit here and say ‘Oh, we couldn’t do that.’ We learned that s--t from y’all!”

After a white woman stood to say there was a need to love everyone, a couple people in the crowd shouted “that doesn’t work anymore” and “Martin Luther King was the most peaceful protester, and they still shot him.”

Marlon Collins, of Charleston, said, “We have a right to be mad.” But Collins, who is black, urged the crowd to vote.

“They ain’t going to listen until they see you in line at the voter’s box,” he said.

Despite the pandemic, the attendees stood and chanted close together, but most wore face coverings. Through their masks, speakers’ hoarse voices reached from the City Hall steps to the throng below.

The event was organized by a white person who only gave her name as Mother Mayhem. She wore a Guy Fawkes mask — the one popularized by the “V for Vendetta” movie and graphic novel — and carried the flag of Anonymous, the online hacking group.

Mother Mayhem said she has black family members, one of whom is wrongfully imprisoned.

“I would die for the black people in my life,” she told the crowd.

Though the rally was peaceful, attendees showed their willingness to stand up to possible threats.

Police had shut down sections of Virginia and other streets for the early part of the demonstration and the connected march, and the crowd agreed afterward to move onto the sidewalks.

But when a white man appeared in military gear with a rifle, causing alarm, protesters began laying down on Virginia, again blocking traffic, until the man was led away by police.

The man, Michael LeRose, of Nitro, said he was with the Sons of Liberty, and was there “actually moreso to make sure the cops didn’t f- — with them.” He said he supports the U.S. Constitution and the demonstrators’ right to protest, but was also there to oppose attacks on “local establishments.”

“If you want to burn something down, burn that f---ing police station down,” LeRose said.

“The unfortunate death of George Floyd was due to an officer’s poor tactics and decision making,” Hunt said. “The officer was obviously in the wrong and I pray that none of our officers ever think the actions in this scenario were acceptable. I have made it clear to my officers that we, the Charleston Police Department, are not that guy. I urge each officer to show our community that our primary goals are to protect life and property.”