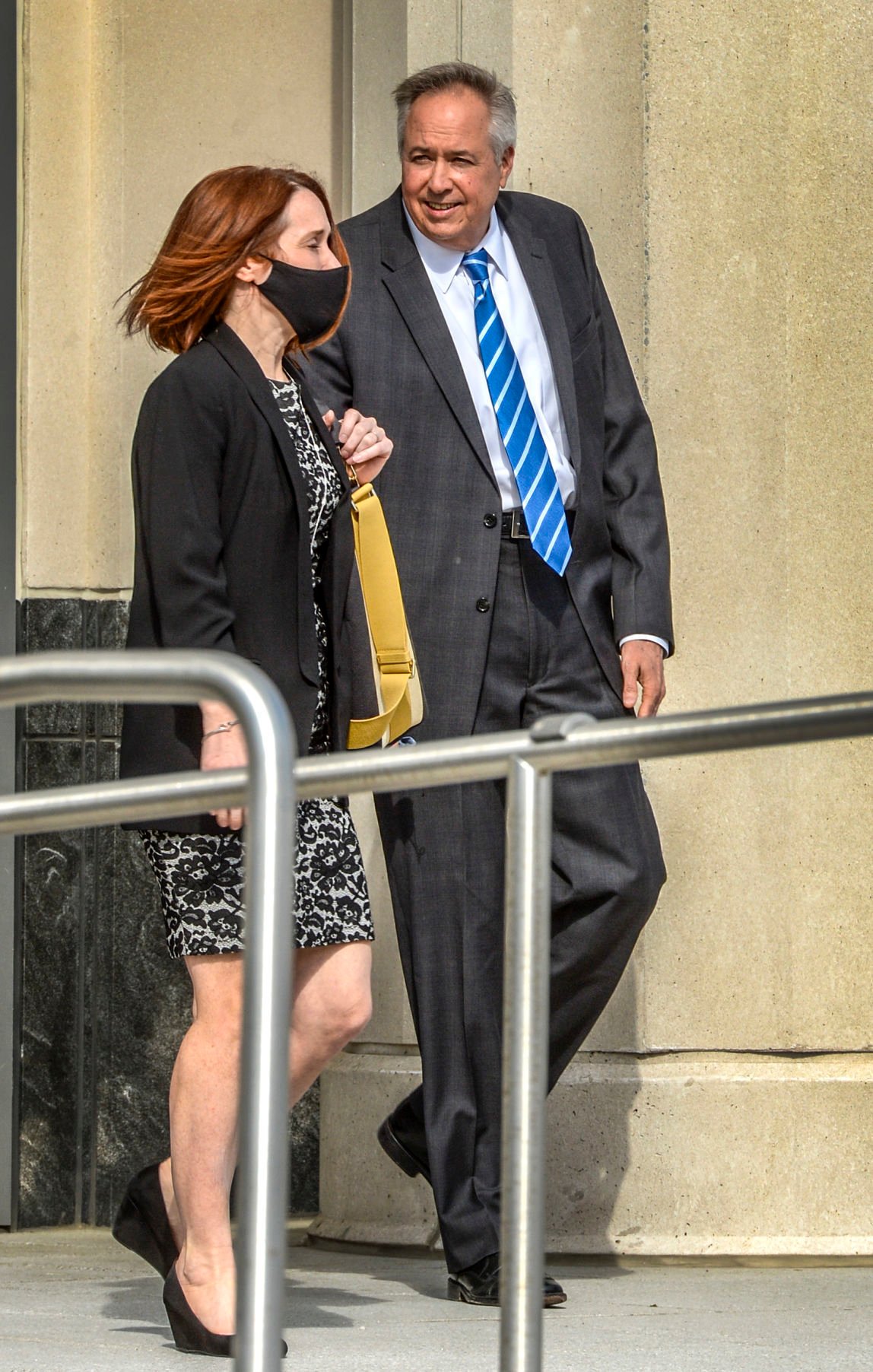 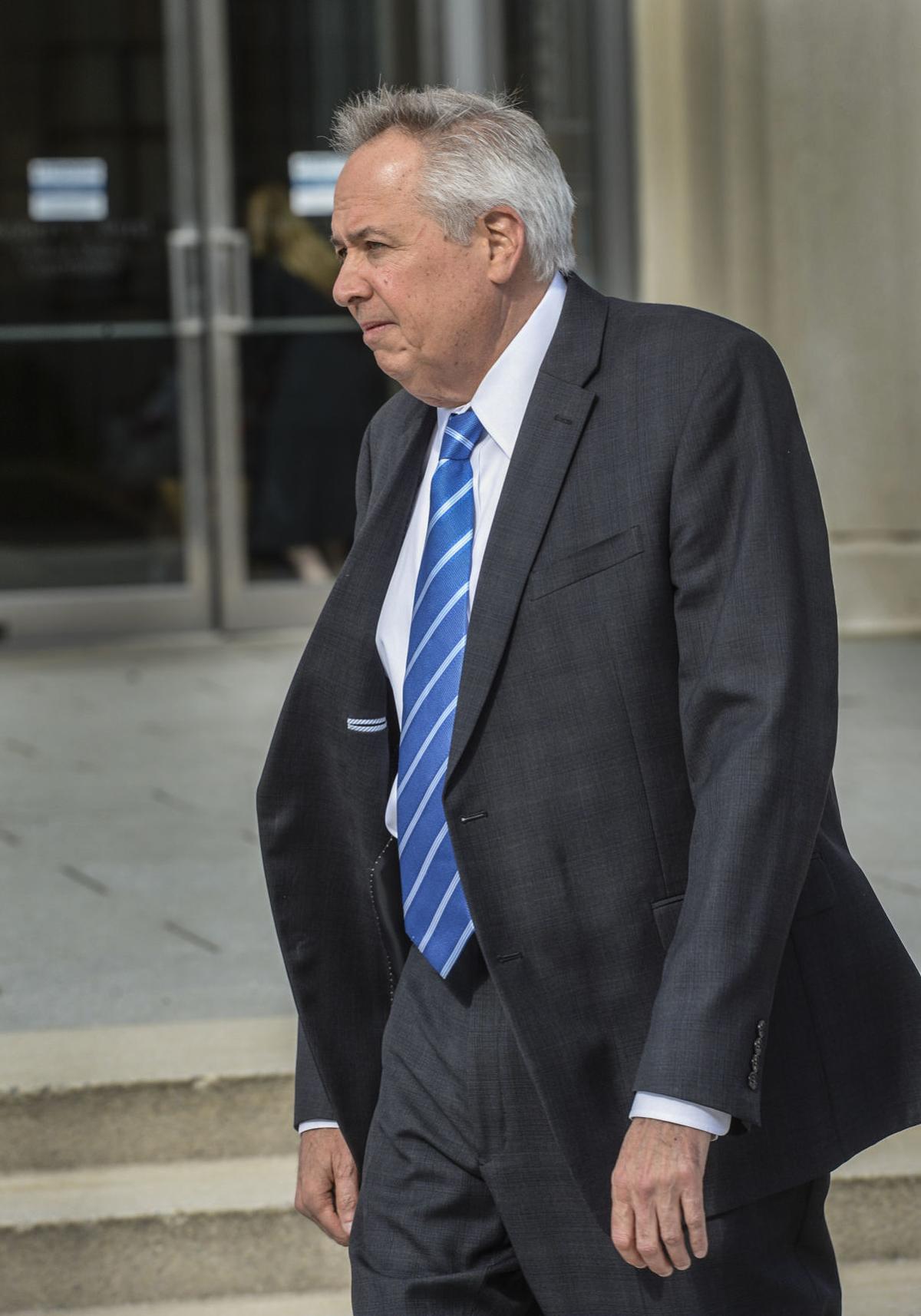 Chris Zimmerman, a senior vice president for AmerisourceBergen Drug Co., leaves the federal courthouse in Charleston on Wednesday evening, after taking the stand during the ongoing opioid trial pitting Cabell County and Huntington against drug manufacturers.

Chris Zimmerman, a senior vice president for AmerisourceBergen Drug Co., leaves the federal courthouse in Charleston on Wednesday evening, after taking the stand during the ongoing opioid trial pitting Cabell County and Huntington against drug manufacturers.

The ruling was made after an energetic and long effort by distributors’ attorneys to block the analysis ahead of testimony from Chris Zimmerman, a senior vice president for AmerisourceBergen Drug Co.

When Zimmerman took the stand, he quibbled with Cabell County attorney Paul Farrell Jr. over the word “duty,” stating that he did not believe his company had a duty to report or stop suspicious orders of opioids. It was more of an agreement, he said.

Zimmerman’s testimony is part of a trial in which the municipalities accuse AmerisourceBergen, Cardinal Health Inc. and McKesson Corp. of fueling the opiate epidemic by sending 127.9 million opiate doses into the county from 2006 to 2014. A reduction in the amount shipped after 2011 led users to turn to illicit opiate drugs, such as heroin, the plaintiffs said.

Craig McCann, a data analyst, testified over three days that nearly 90% of the opiate doses were sent to Cabell County by three distribution facilities owned by the defendants and half of the opiate supply went to just nine pharmacies in the county.

The defendants said it is the U.S. Drug Enforcement Administration that sets opiate shipment quotas, and while they reported suspicious orders to the federal regulator, they never received feedback on their next step. Zimmerman said he wished they’d had better communication with the DEA, similar to that of 30 years ago.

The high shipping rates also could be because of higher numbers of prescriptions being written by doctors of a population with poor health, the defendants said.

Plaintiffs made it over the first major hurdle in their case Wednesday, winning a battle over dozens of charts and documents detailing opioid shipments that McCann used in his testimony over three days. They wanted to use the data in their line of questioning of Zimmerman and others throughout the rest of trial.

On Tuesday, defendants said McCann changed the scales of graphs to make them look more impressive. McCann testified Wednesday that the charts are computer-generated and not manipulated by his business.

Senior U.S. District Judge David Faber also questioned McCann’s findings and asked him about eight changes he made with the data to make his analysis, like reverse distributions, and why he left it out. McCann explained that he thought some of the data was entered erroneously and accounted for a very small amount.

The defense said the plaintiffs had “cherry picked” what they wanted to start creating their conspiracy theory.

“This court has to [review] evidence, not tools hand-picked by the plaintiffs’ witness,” they said.

After nearly a half-hour of arguments about whether the data should be submitted, Faber decided to allow it, conditionally, stating that he would take up objections to the material as it is used.

After the ruling, Farrell and Zimmerman met head to head in the courtroom, Farrell joined by an oversized bar graph flanked by 16 cutouts of black flags waiting to be placed on the chart.

Zimmerman’s responsibilities were those of security, which could be anything from workplace violence to theft, but, at one point, included monitoring suspicious-order reports and running diversion-control programs.

Despite being one of the highest-ranking officials at the business, Zimmerman repeatedly said he does not know how many pills were shipped to Cabell County and that he has never visited the area, even though it received a high volume of pills from the company.

Zimmerman agreed that West Virginia, Cabell County and Huntington are in the midst of an epidemic involving opiate use and abuse, which has a devastating effect on public health and safety, as well as the physical well-being of residents, including a higher mortality rate.

Zimmerman said he had not looked at files from the case on trial or read any depositions made by dozens of Cabell and Huntington officials who told defendants’ attorneys the story of the crisis. Farrell then walked Zimmerman through the history of drug abuse and regulatory changes made since 1999, using his black flags to pinpoint important moments.

The first flag was placed on the chart around 2001, marking a congressional hearing held on OxyContin abuse, which was around the time Zimmerman took his current position. Another was placed around 2005, when the DEA placed greater responsibilities on distributors to report suspicious drug orders.

“Our responsibility is to report a suspicious order, not a bad order,” he said. “When we stop an order, it affects patient care.”

Farrell pointed to a letter sent to distributors by the DEA in September 2006 in response to the start of the drug crisis stating that they “must take responsible steps to ensure their registration is not being utilized as a source of diversion.”

It said distributors must be vigilant in deciding whether a customer can be trusted to deliver controlled substances lawfully.

“It’s not our job to police the pharmacies,” Zimmerman said.

“A distributor may not simply rely on the fact the person placing the suspicious order is a DEA registrant and turn a blind eye to the suspicious circumstances,” the letter continued.

AmerisourceBergen did not change any policy, and its Orlando, Florida, distribution center was suspended because of it. A settlement was later reached in 2007 for the distributor to continue business. The company agreed to maintain better programs to track suspicious orders and maintain compliance.

Farrell pointed to the agreement that said any orders that could not be confirmed as legitimate are to be “held” and not shipped to customers. Farrell said the companies continued to ship the same level of opiates into West Virginia, though.