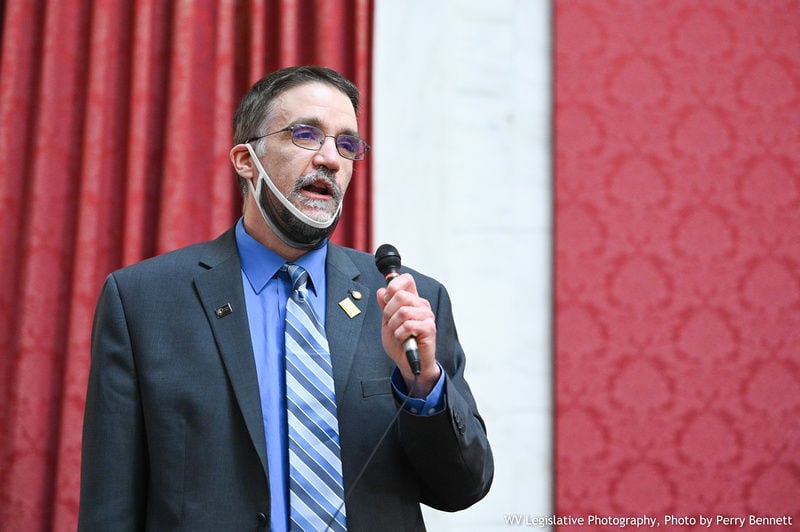 Delegate Tony Paynter, R-Wyoming, is seen with his mesh mask around his chin as he speaks on the House of Delegates floor Thursday. Delegates are required to wear a mask, but the type is not specified and it can be removed when they address the floor. 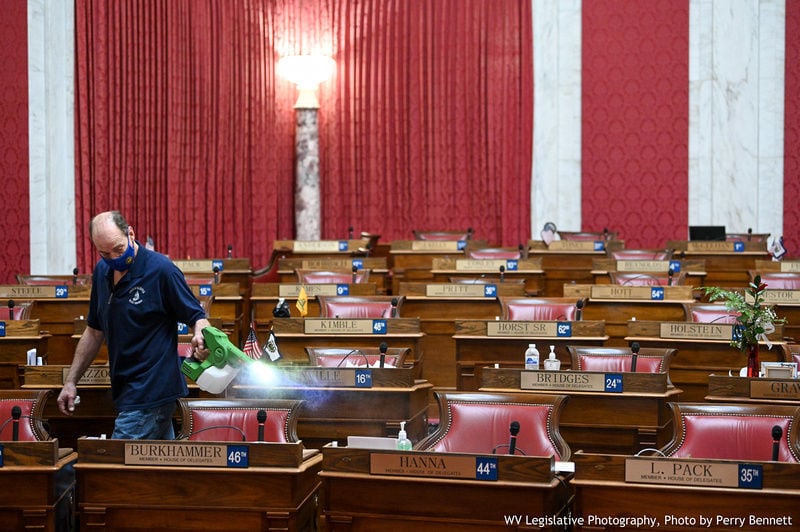 House supply clerk Cliff Harrison sprays disinfectant in the House of Delegates on Friday. Rooms are disinfected between every meeting in an effort to prevent the spread of COVID-19.

Delegate Tony Paynter, R-Wyoming, is seen with his mesh mask around his chin as he speaks on the House of Delegates floor Thursday. Delegates are required to wear a mask, but the type is not specified and it can be removed when they address the floor.

House supply clerk Cliff Harrison sprays disinfectant in the House of Delegates on Friday. Rooms are disinfected between every meeting in an effort to prevent the spread of COVID-19.

Republicans blame fears of a COVID-19 outbreak in the Capitol for bills being rushed through the state Legislature, but minority foes wonder how seriously their majority counterparts take the threat.

Among virus precautions, committee meetings are limited to larger rooms with less seating for press and other guests, chambers are being used more, galleries are open for lawmakers to get more distance if they desire and video conferencing is being used in the Senate. The public is barred from galleries and committee meeting rooms. The only way for people to get inside the people’s house is to make appointments with lawmakers.

“We’ve tried to do our very best to safeguard all those here at the Capitol, not only members but staff,” said House Majority Whip Delegate Paul Espinosa, of Jefferson. “However, we want to make sure we maintain transparency. We continue to stream all of our meetings so folks can follow the proceedings.”

Masks are required, but the type of mask isn’t specified. A faction of conservative lawmakers and staff are wearing mesh masks.

Senate Minority Leader Stephen Baldwin, of Greenbrier, and Sen. Ron Stollings, D-Boone, both said those who refuse to wear face coverings make a mockery of public health standards and endanger colleagues, many of whom have not been vaccinated.

“I think 90% of the folks are doing the right thing and following guidelines, wearing the masks, staying a distance from others,” Baldwin said. “Where we have the real issue with the people who are not compliant, the 10%. And it’s not in the chamber. It’s outside of the chamber before the session and right after session. It’s in the hallways and in the offices.”

Senate Clerk Lee Cassis said guidelines the Senate adopted don’t define face coverings or refer to public health guidelines such as those from the Centers for Disease Control for protocols about masks.

Senators who don’t want to wear a mask during can sit in the back of the chamber but are required to don coverings upon returning to their desks to vote.

Stollings, a family care physician who lost two patients to COVID-19, said not wearing a proper face covering is disrespectful to virus victims and their families.

Espinosa said which type of mask to wear has been left to the discretion of lawmakers.

“We’ve tried not to micromanage that,” Espinosa said.

“I want them to look in the eyes the West Virginians who have lost a loved one, and they think wearing a mask is inconveniencing them? Come on,” said Skaff, who is president of HD Media LLC, publisher of the Charleston Gazette-Mail and Herald-Dispatch.

While all Senate meetings are video livestreamed, the House has opted to only use audio for committee meetings. Zukoff said she sent a letter to House Speaker Roger Hanshaw, of Clay, requesting the use of video livestreaming but hasn’t gotten a response.

While most people testify in Senate committees by video, the House is inviting guests to testify in person. Because of the restrictions, Skaff said, this leads to the majority getting to choose who gets to speak, controlling the narrative.

“My concern as the minority leader is they are using COVID-19 protocols as a way to keep people in the dark,” Skaff said.

Skaff said he hoped the governor relaxing COVID-19 restrictions would lead to public access restrictions being loosened in the Capitol.

Espinosa said leaders are working to make the session as efficient as possible and have shown they are willing to send bills back to committee or double-reference them, if the need arises.

“I want to emphasize the public can continue to reach out to members,” he said. “I’ve spoken to a number of constituents, I’ve gotten emails, scheduled virtual meetings. I and colleagues in between meetings are participating in a lot of those virtual activities. I am doing my very best to remain accessible so the public can weigh in.”