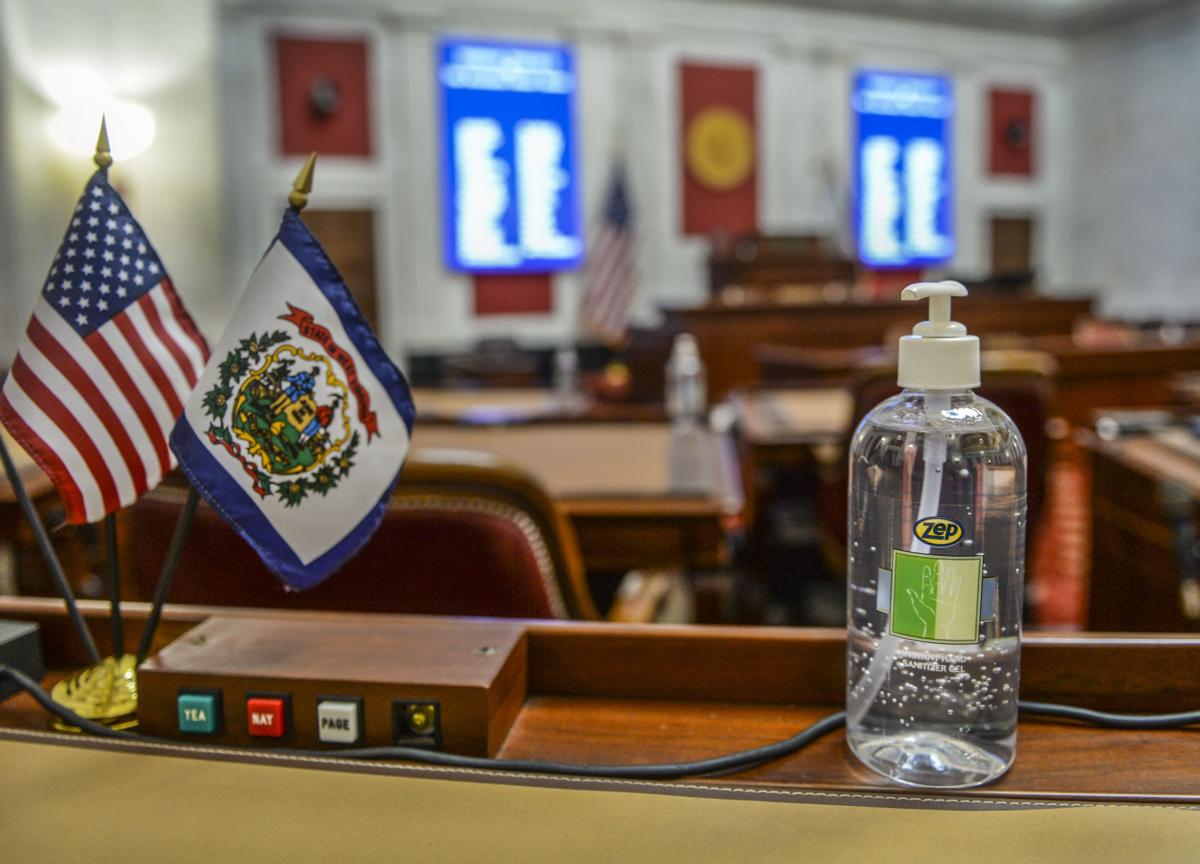 Bottles of hand sanitizer were placed on the desk of each senator in the Senate chambers. 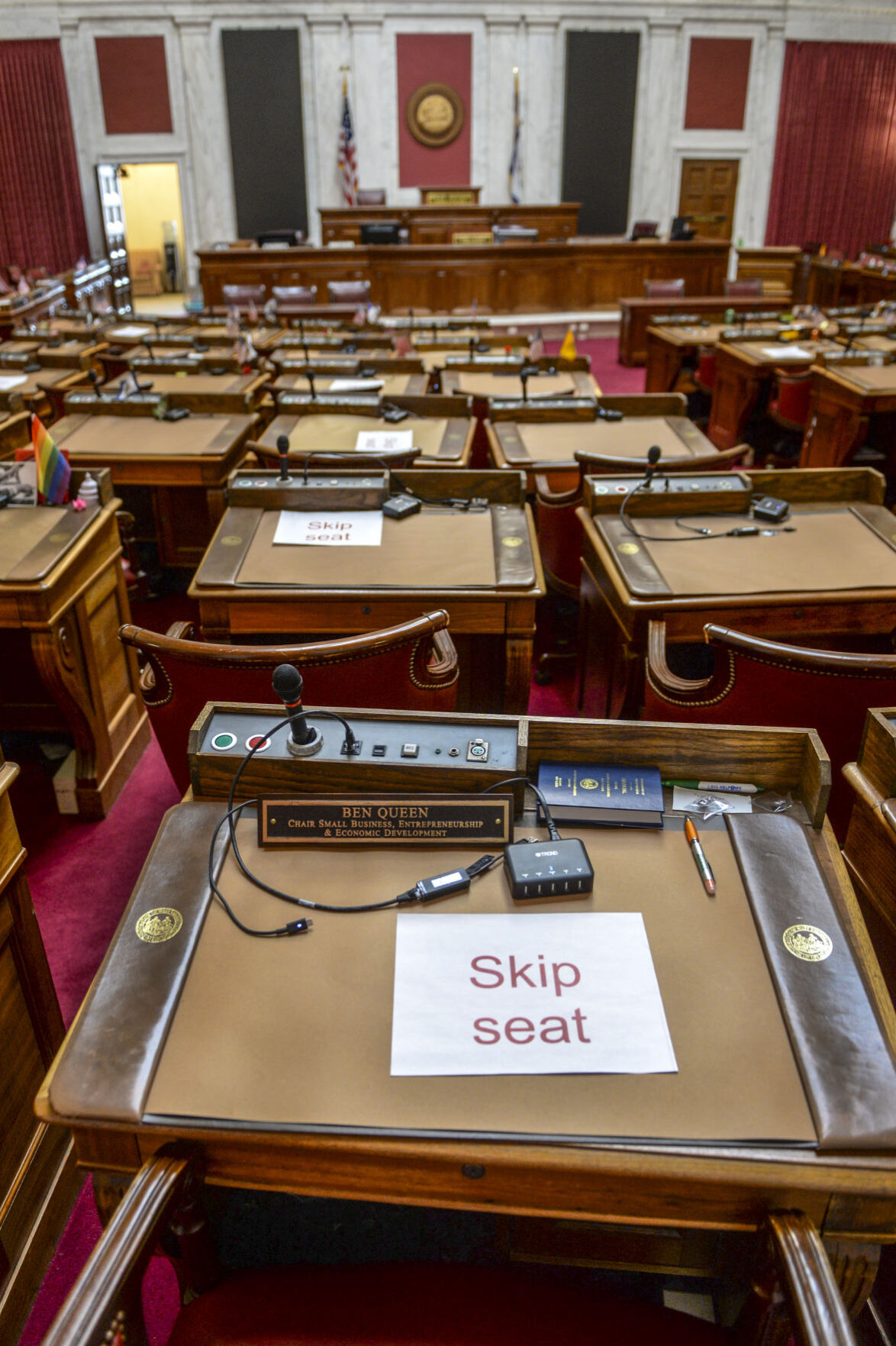 “Skip seat” signs have been placed on delegates’ desks in the House chambers. House Clerk Steve Harrison said there’s enough room in the chamber to have 52 delegates on the floor and 16 in each of the three galleries overlooking the chamber. 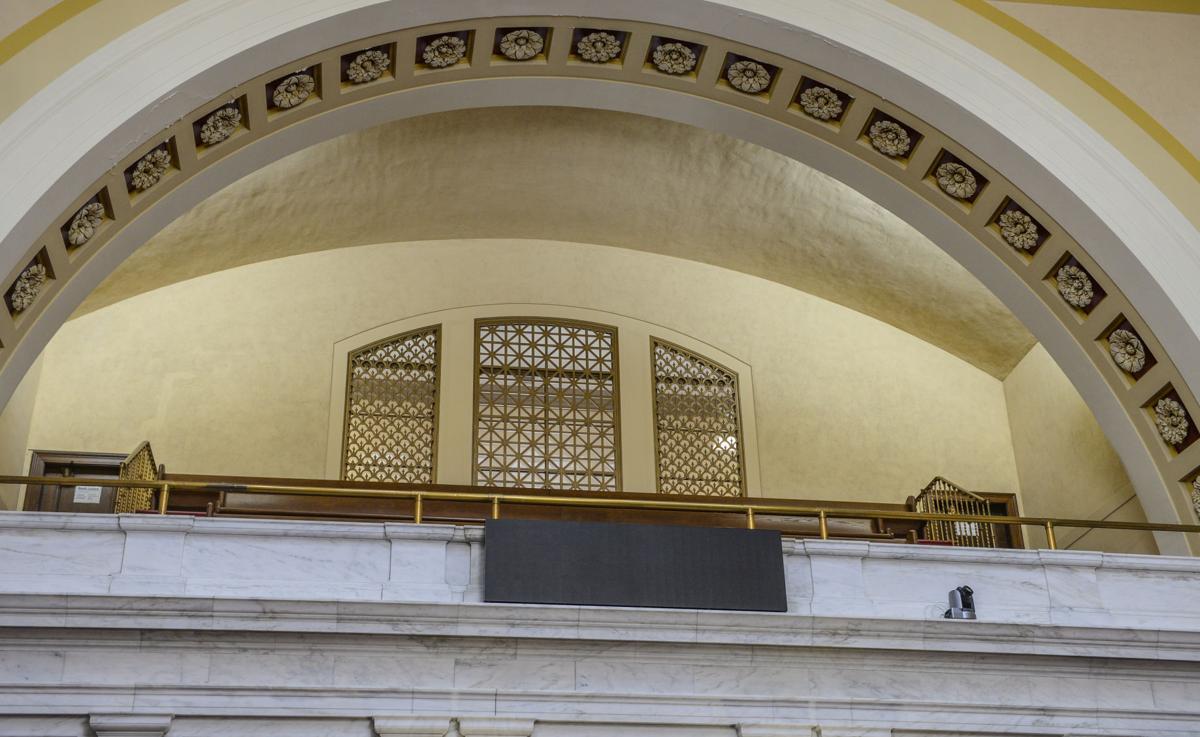 New video screens were installed in the House chambers in the last two weeks. The new screens will display bill numbers and titles and vote results as well as the proceedings on the floor. 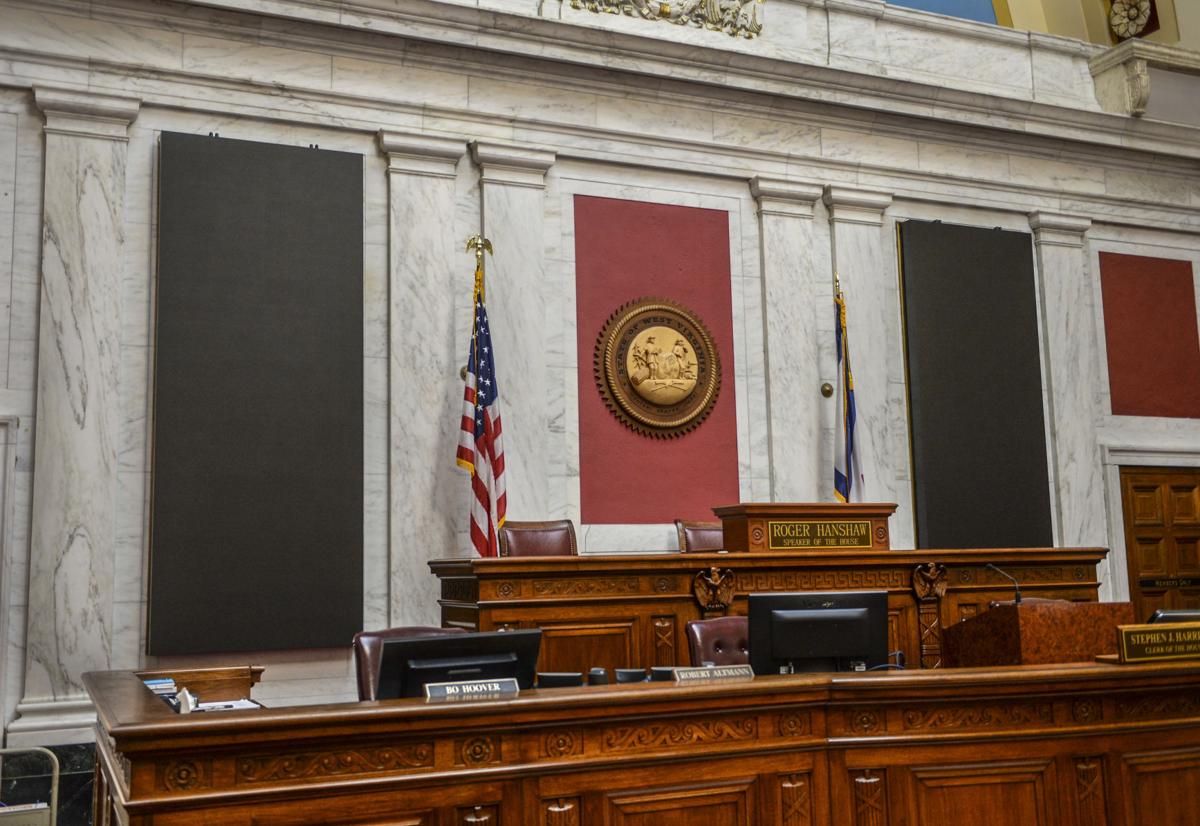 New video boards were installed in the House chambers to replace the old digital and light-up boards. 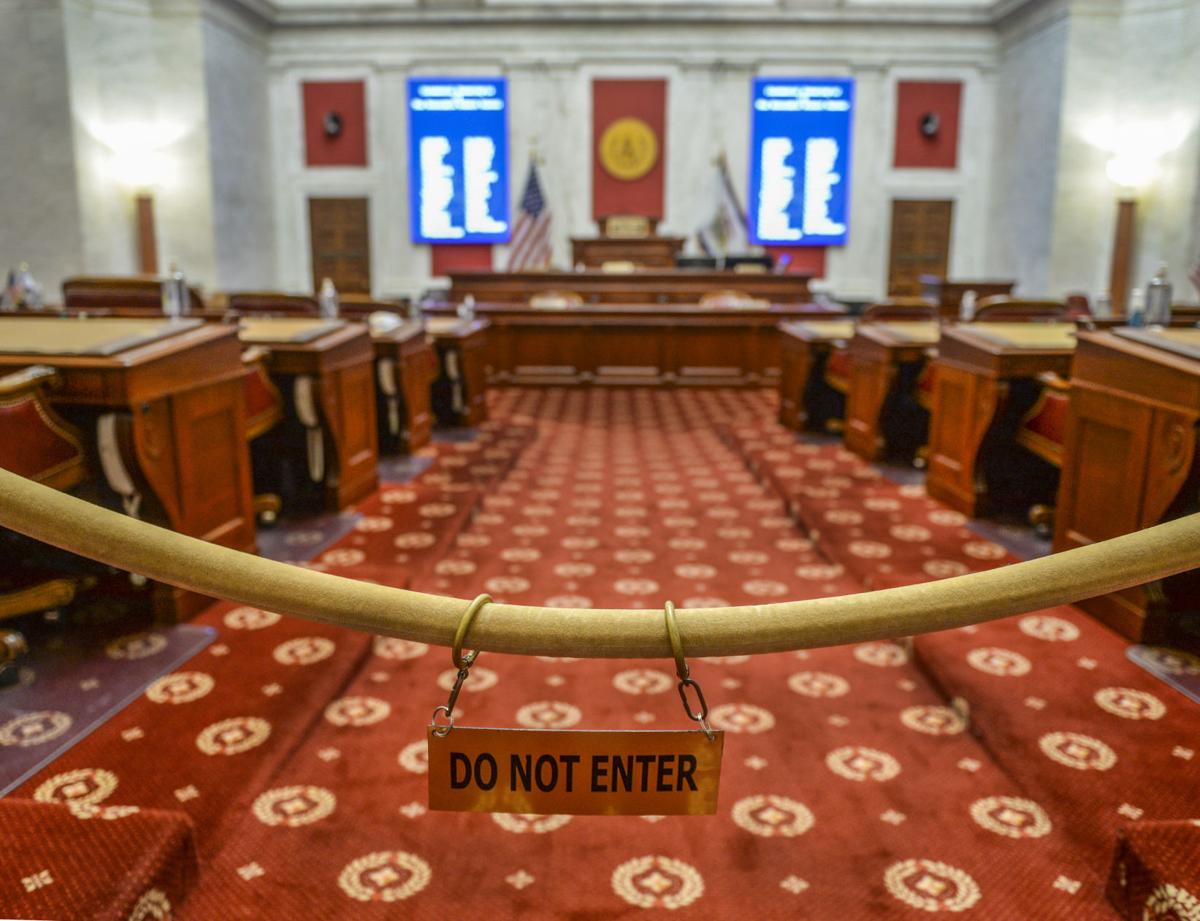 A placard in the Senate chambers warns visitors "Do Not Enter."

Bottles of hand sanitizer were placed on the desk of each senator in the Senate chambers.

“Skip seat” signs have been placed on delegates’ desks in the House chambers. House Clerk Steve Harrison said there’s enough room in the chamber to have 52 delegates on the floor and 16 in each of the three galleries overlooking the chamber.

New video screens were installed in the House chambers in the last two weeks. The new screens will display bill numbers and titles and vote results as well as the proceedings on the floor.

New video boards were installed in the House chambers to replace the old digital and light-up boards.

A placard in the Senate chambers warns visitors "Do Not Enter."

West Virginia Legislative staff is trying to figure out how to keep 134 lawmakers a safe distance apart at the state Capitol when they come together for the 2021 regular session in February.

Senate and House of Delegates leaders and staff have taken meetings with public health and security officials to determine if and how they can pull off a legislative session during the coronavirus pandemic while upholding the constitutional and procedural obligations each lawmaker must follow.

So far, there aren’t any plans to delay the session, but the option hasn’t been ruled out, said House Clerk Steve Harrison and Senate Clerk Lee Cassis, both of whom are in charge of coordinating whatever technical, physical or other changes need to happen to accommodate lawmakers.

“We’re ready to go on a number of different levels and a variety of scenarios,” Cassis said. “That’s about all I can say right now.”

Even with rough plans in place, members of the Senate and House will have to determine how they want the session to work and, potentially, vote on changing some rules to accommodate public health guidelines before some things can be implemented.

If they do vote on such changes, Cassis and Harrison said, they most likely would take place on Jan. 13, when the Legislature convenes for an organization day. Since this is a gubernatorial election year, the 2021 legislative session won’t begin until Feb. 10.

The tentative plans look different in the 100-member House and the 34-member Senate, both of which operate out of similarly sized chambers on opposite ends of the Capitol building.

As of this week, both chambers are equipped to allow lawmakers to conduct the state’s business in their normal chambers, but arrangements won’t be like normal.

Members of the West Virginia National Guard helped measure each space and determined that the Senate won’t have to move desks or spread senators throughout the chamber, since their desks already were a safe distance apart — as long as all senators wear masks at all times while they’re in the 5,875-square-foot chamber.

There already were 34 bottles of hand sanitizer sitting on senators’ desks in the chamber Thursday.

Cassis said the Senate’s accessible streaming services and archives system are a useful tool in making the Senate more accessible to the public from a distance.

The House of Delegates, which already is filled nearly wall-to-wall with delegates’ desks, will require a bit more spreading out and creative seating, Harrison said.

Breaking it down, there’s enough space to place 52 delegates on the House floor then put 16 delegates in each of the House’s three galleries, located on the top floor of the East Wing, Harrison said.

The House of Delegates chamber is slightly larger than the Senate chamber. The exact square footage of the chamber wasn’t available Thursday evening.

State technology contractors this week were working on giving delegates in the gallery the ability to vote from their laptops, Harrison said.

As is the case in normal sessions, the House speaker will decide the seating arrangements for delegates.

“We are looking at some of the wording in the rules to broadly clarify that he can assign seating [in the gallery],” Harrison said.

During the past two weeks, the House chamber has been equipped with new screens at the front and sides of the room, replacing older digital screens and light-up boards that showed how delegates voted.

In addition to posting bill numbers, titles and vote results, the new screens will be capable of projecting the House proceedings, so all members can see what’s going on, no matter where they sit, Harrison said.

If the House has to use the modified seating plan, it’s also likely delegates will have to use a modified committee schedule and only be able to meet in either the House chamber or the room where the House Government Organization Committee regularly meets. Those are the only two rooms big enough to accommodate committee members and practice safe social distancing, Harrison said.

For the Senate, Cassis said, committee meeting rooms there are big enough to accommodate social distancing among the members.

One of the biggest challenges of the session is that the rules of both chambers require members to be physically present in their respective chambers to vote. That means voting remotely or from one’s office at the Capitol isn’t written in the rules, even if technology makes it possible.

In the Senate, Cassis said, a proposed rule would accommodate senators who test positive for COVID-19 or who are exposed to the virus and are required to isolate during the session. He declined to share details because senators hadn’t yet seen the proposed rule.

In the House, such a circumstance hasn’t yet been resolved.

Neither Cassis nor Harrison could say if lawmakers are seriously considering delaying the regular legislative session or even canceling it.

The only legislation that the West Virginia Constitution requires lawmakers to complete is a balanced budget, which would have to be presented to the governor by June 30. The Legislature will have to convene to do at least that much, both clerks said.

“I think everything’s on the table,” Cassis said.

Planning in a pandemic

Meetings for a pandemic legislative session began in April, when there was a possibility of a special session, Harrison and Cassis said. At the time, staff considered renting space in the Charleston Coliseum & Convention Center, but, at least for the House, it wasn’t the top choice.

“Leadership really wants to be able to meet in the House chambers, so, several months ago, we started looking at how we could make that happen,” Harrison said.

Even with the best-laid plans and all of the Legislature’s resources, the trajectory of the session, like so many other things in 2020, will depend on the circumstances of the virus, the vaccine and the will of the lawmakers in February.

Harrison said staff members are doing their best to be prepared for anything they can anticipate.

“A lot of it won’t be determined until we see what the situation is when we get to the session,” he said. “You want to prepare, but you also have to realize that we can prepare and the situation might be a lot different a month or two from now. Hopefully, it is different in a better way, but we just don’t know.”

As COVID-19 vaccines roll out, leaders in the Supreme Court and legislature are gauging risks and demand

In the West Virginia Supreme Court’s plan to administer the COVID-19 vaccine to employees who want it, probation officers, magistrates and oth…