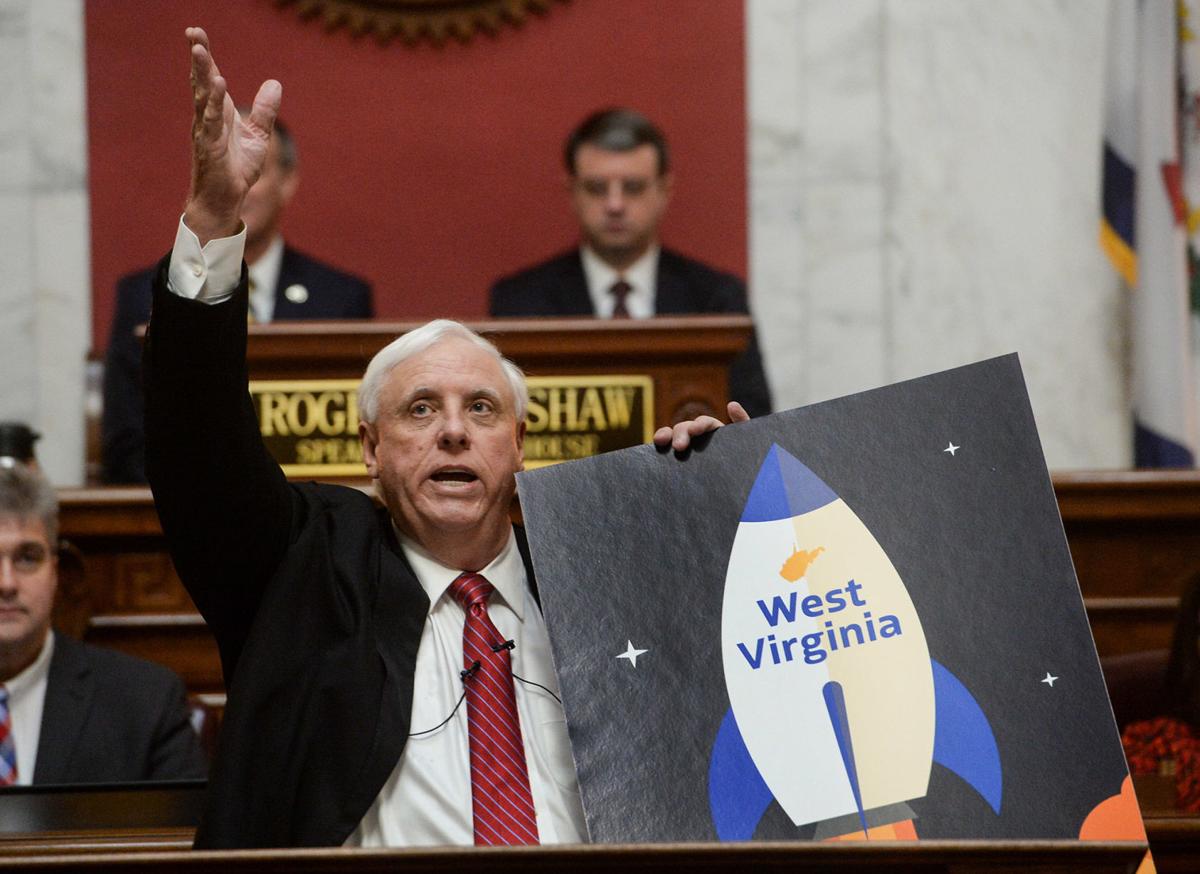 Gov. Jim Justice says West Virginia is ready to take off like a rocket ship during his State of the State speech in the House chamber Wednesday night. 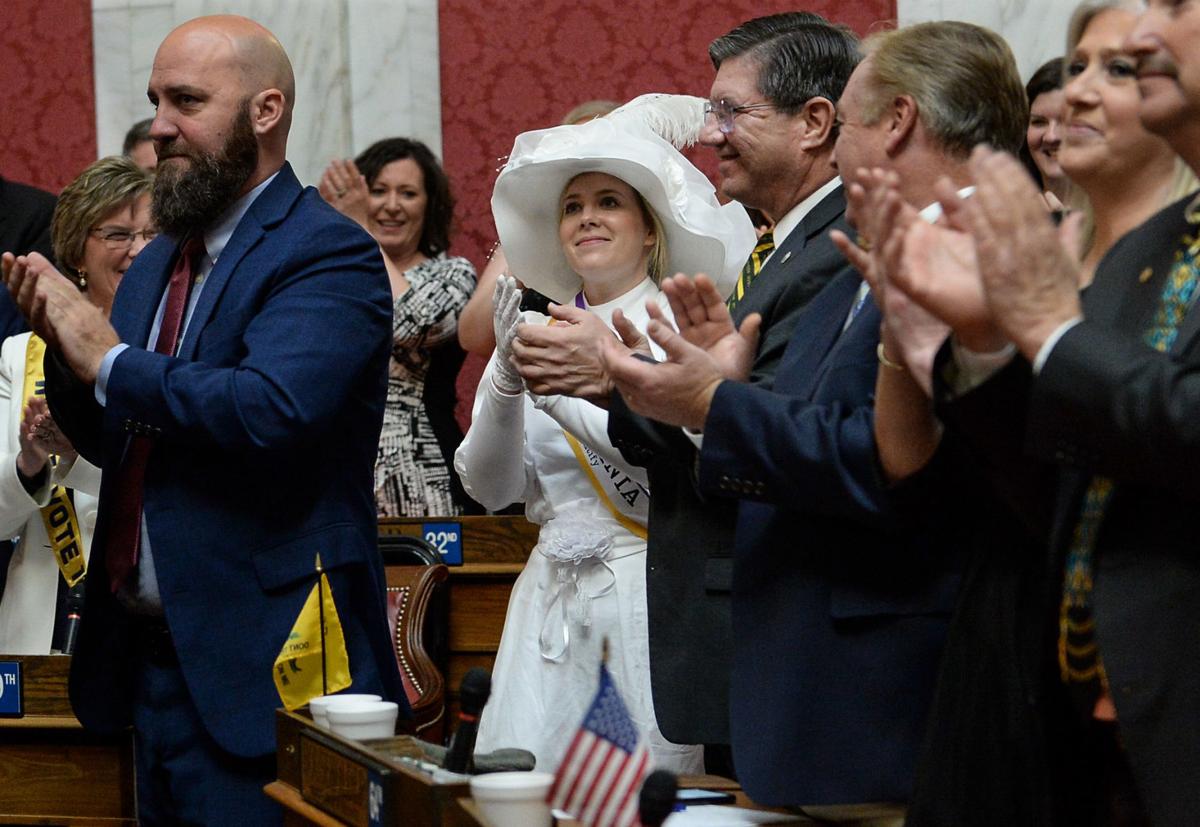 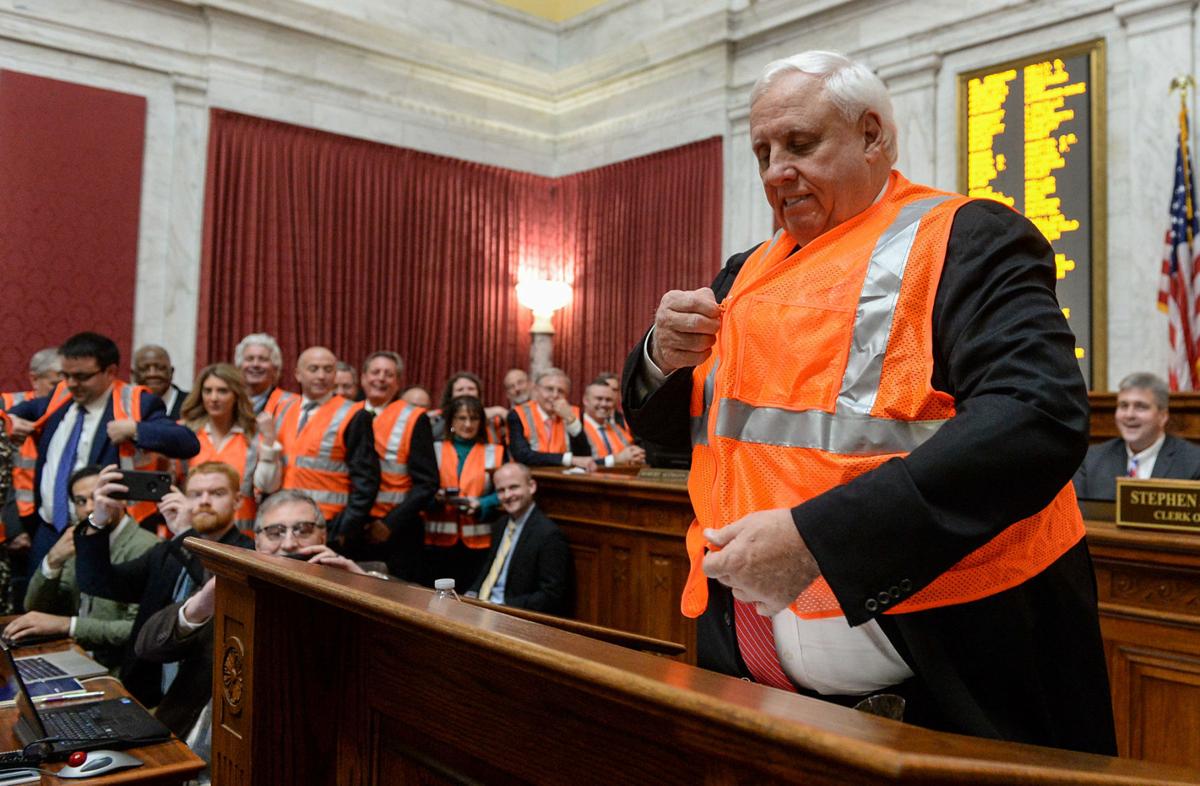 Gov. Jim Justice puts on a state Division of Highways safety vest during his State of the State address. 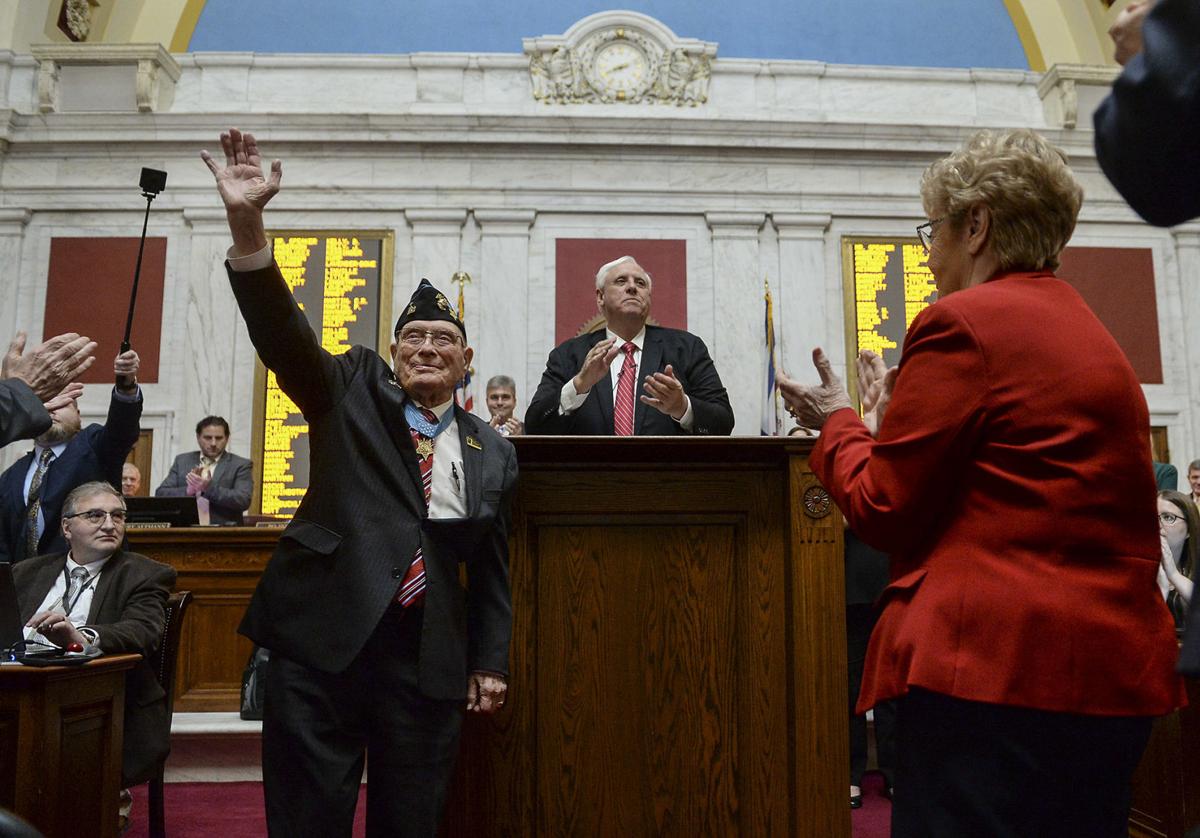 Medal of Honor recipient Woody Williams waves to the crowd while receiving a standing ovation after being recognized by Gov. Jim Justice during the State of the State address Wednesday night.

Gov. Jim Justice says West Virginia is ready to take off like a rocket ship during his State of the State speech in the House chamber Wednesday night.

Gov. Jim Justice puts on a state Division of Highways safety vest during his State of the State address.

Medal of Honor recipient Woody Williams waves to the crowd while receiving a standing ovation after being recognized by Gov. Jim Justice during the State of the State address Wednesday night.

Gov. Jim Justice lauded a flourishing economy for the state of West Virginia, but he didn’t discuss an anticipated $108.6 million revenue shortfall for next year during his State of the State address Wednesday night.

Briefly saying the state’s severance tax revenue is the lowest it’s been in 25 years, Justice did not address how he anticipated lawmakers would account for what’s been described as a “flat” budget for fiscal year 2021 during his speech in the House of Delegates chamber.

In a speech that saw a special guest appearance by World War II Medal of Honor recipient Woody Williams, Justice announced his goal to get rid of a wait list for Medicaid waivers, support for a safety net and a new purpose for the former campus of West Virginia Tech in Montgomery.

About four hours before Justice delivered his speech, Revenue Secretary Dave Hardy told reporters that the general revenue budget for the 2021 fiscal year would be flat, compared to last year, at about $4.58 billion.

At the top of Justice’s speech, he said he stood “like a rock” with President Donald Trump and the things he stands for, including “legal immigration” and being against sanctuary cities, which Justice said he hoped and prayed never came to West Virginia.

“I can tell you without any reservations, I stand with the unborn, and I’m a sportsman,” Justice said. “I love the outdoors. The Second Amendment is ingrained in me forevermore; whether you love me or don’t love me, it’s a simple fact.”

In his next point, Justice said a widely circulated photo of members of a Division of Corrections and Rehabilitation officer training class giving a Nazi salute was “not good”

Among the governor’s priorities for the 2020 legislative session is the elimination of a wait list to access a Medicaid waiver for people with intellectual and developmental disabilities. The announcement received a standing ovation, with one woman in the crowd thanking Justice as the applause died down.

Medicaid waivers allow for certain rules of the health care program to be waived for people who normally don’t qualify for Medicaid services. Among those groups who qualify for waivers are people who have intellectual disabilities.

Justice asked lawmakers Wednesday to commit to spending $19.7 million to make it happen.

He also asked them to build into the budget $26.4 million to the Department of Health and Human Resources to hire 87 Child Protective Services workers and better support social services and the Children’s Health Insurance Plan, better known as CHIP.

“We got a real problem, and we gotta own up to it and step up to the plate and do something about it,” Justice said. “So, we’re going to, within my budget ... we’re going to try to improve child welfare in the state of West Virginia until it is the very best in the country.”

The DHHR is facing a lawsuit in federal court, brought by state and national advocacy groups who say the state has violated the federal and constitutional rights of the nearly 7,000 children in its custody.

Early in his speech, Justice said he supported a bill proposed by Attorney General Patrick Morrisey and Senate President Mitch Carmichael, R-Jackson, that would create a safety net when it comes to insurance coverage.

The Affordable Care Act, also known as Obamacare, contains a provision that prohibits insurance companies from denying coverage based on preexisting conditions. The bill would prevent insurance companies from denying West Virginians health care coverage due to a preexisting condition in the event that the ACA is repealed, either through Congress or via any action in court.

A lawsuit is pending in U.S. District Court in Texas that challenges the ACA. Morrisey was one of the attorneys general who signed onto the lawsuit when it was filed in 2018.

In other statements from the governor’s speech:

The academy, currently located at Camp Dawson in Preston County, is a military-like school that allows students to earn their high school diplomas in about five months.

Statehouse Beat: Justice's fourth State of the State veers toward the conventional

In a speech that attempted to make up for a lack of new initiatives with unbridled (and probably unrealistic) enthusiasm, hyperbole and sheer …