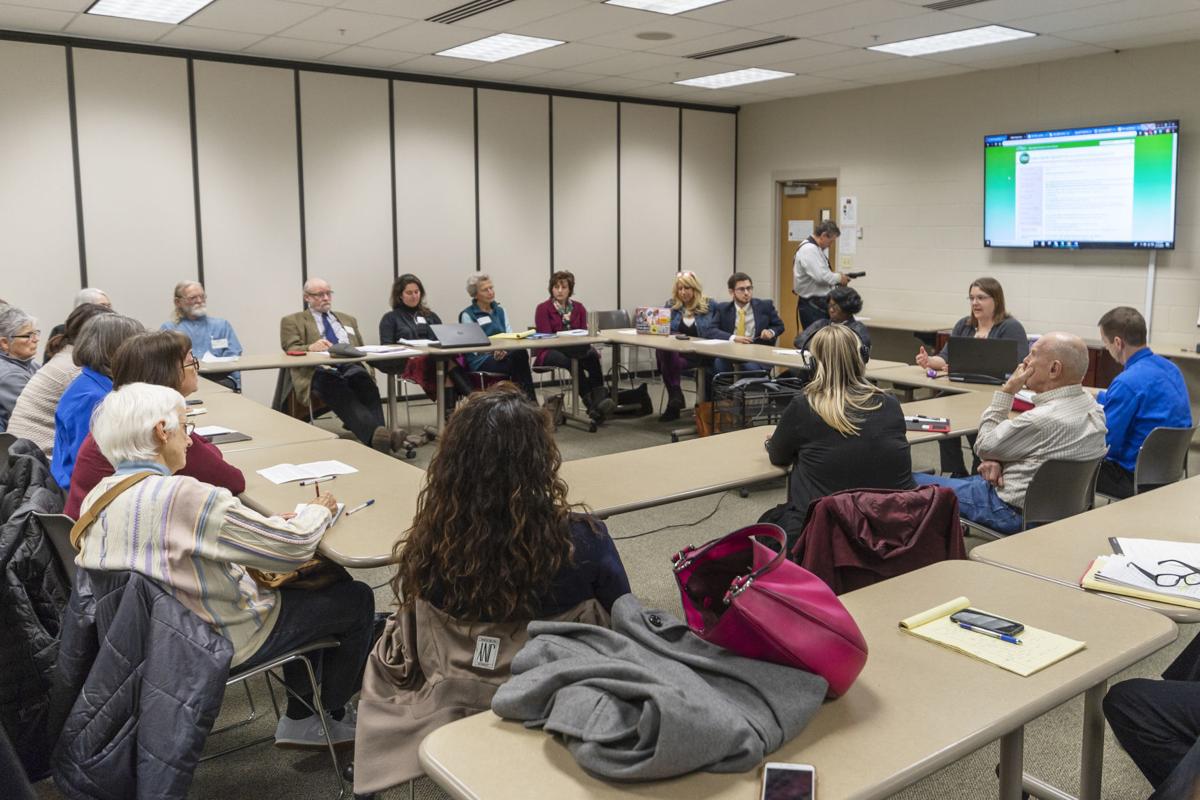 Citizens question the West Virginia Department of Environmental Protection about its decision to wait for more studies before sending water quality recommendations to the Legislature at a listening session in Charleston, on Thursday. 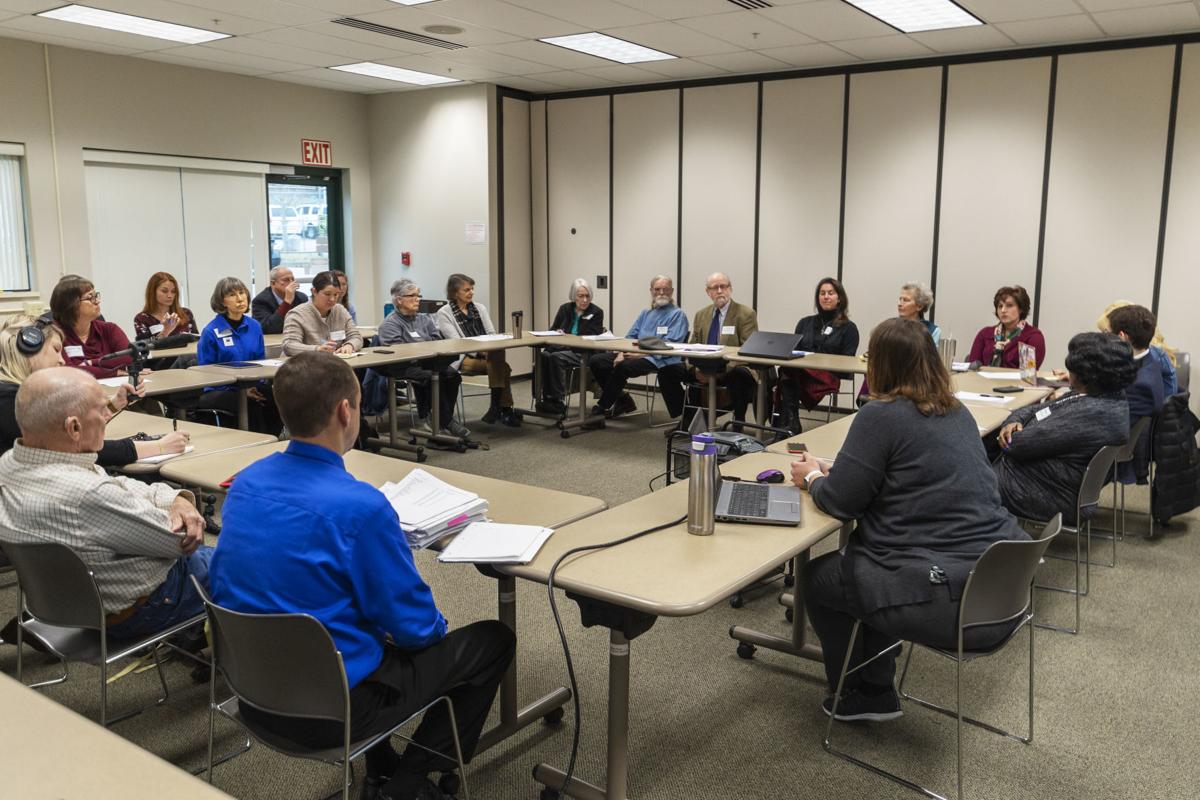 Citizens question the West Virginia Department of Environmental Protection about its decision to wait for more studies before sending water quality recommendations to the legislature at a listening session in Charleston, on Thursday.

Citizens question the West Virginia Department of Environmental Protection about its decision to wait for more studies before sending water quality recommendations to the Legislature at a listening session in Charleston, on Thursday.

Citizens question the West Virginia Department of Environmental Protection about its decision to wait for more studies before sending water quality recommendations to the legislature at a listening session in Charleston, on Thursday.

After the state Department of Environmental Protection reviewed rules on water quality standards, responded to public comments and presented their findings about those standards to the Legislature, it’s still not clear when those rules might be implemented, if at all.

The rules on human health criteria were sent to the legislative rule-making committee in November, when the West Virginia Manufacturers Association said its membership wanted more studies about the criteria. In response, lawmakers decided to eliminate all new proposals and updates to West Virginia’s limits on toxins in water, and the DEP agreed to go get more information.

Part of that information gathering included a public listening session Thursday afternoon, when state regulators were grilled for two hours on why they would acquiesce to the last-minute requests of the state’s manufacturing community.

But on Thursday, the Manufacturers Association said it was working with Jennie Henthorn, and her consulting company, Henthorn Environmental Services, to look at the criteria. Those studies haven’t really started, Henthorn said.

If the Legislature doesn’t act and update its human health criteria, the DEP will continue to implement 1980s-era criteria. Failing to update West Virginia’s water standards leaves us in the past, with high limits, said Angie Rosser, executive director of the West Virginia Rivers Coalition.

And it’s becoming apparent to everyone in the room, she said Thursday, that the DEP is being complicit in attempts to stall updates — especially following a long round of public comments and meetings.

“And suddenly now, today, or November, we’re hearing from the Manufacturers Association that they’re just now starting their study of this,” she said. “And that the DEP is saying ‘Well, Manufacturers Association, we’ll wait for your study. Show us what you got.’ When? A year from now? Three years from now? Ten years from now? How long is this process going to keep stalling while we’re living in the 1980s?”

So, several people asked, is the DEP going to go to the Legislature and stand by its initial recommendations?

“I can’t really say today what exactly we’re going to do because we’ve just started to listen to you all one more time,” said Laura Cooper, assistant director of Division of Water and Waste Management.

The DEP wouldn’t have put the recommendation forward if regulators didn’t stand by it at the time, said Scott Mandirola, WVDEP deputy secretary or external affairs.

“If they’re asking us to gather more site-specific information that we don’t have currently, then that information has to be gathered, presented to us. We need to review it and determine how it would affect those water quality standard changes. And that’s not something that’s going to be done, in my view, in the next 53 days,” he said, then deferring to the Legislature about whether there might be more credible studies.

People also brought up the DEP’s decision to only act on 56 criteria changes, instead of the federal EPA’s recommended criteria for 94 pollutants.

“Why narrow it down to 56?” asked Delegate John Doyle, D-Jefferson County, asking again repeatedly why the DEP would ignore about 30 additional pollutants.

Because it’s a big undertaking and this is the first step, Cooper said.

Not all of those new recommendations are more stringent, Rebecca McPhail, president of the West Virginia Manufacturers Association, later said in an interview.

“We want to take a look at the whole thing, not just the ones that are harder for us,” she said.

Most protective would be zero, or as low as possible, said Maya Nye, a Ph.D. candidate at WVU’s School of Public Health in the Department of Occupational and Environmental Health Sciences.

“I think we need to be thoughtful about what we’re asking the DEP to do if we’re asking for a zero risk level,” said David Yaussey, counsel for the Manufacturers Association.

Cooper said it’s not clear when the next listening session will be, what the next steps would be or when recommendations would eventually go to the legislature, if at all. The DEP will also be back in front of the Senate Energy, Industry and Mining committee next Tuesday.

“So I don’t know what will happen there,” Cooper said.