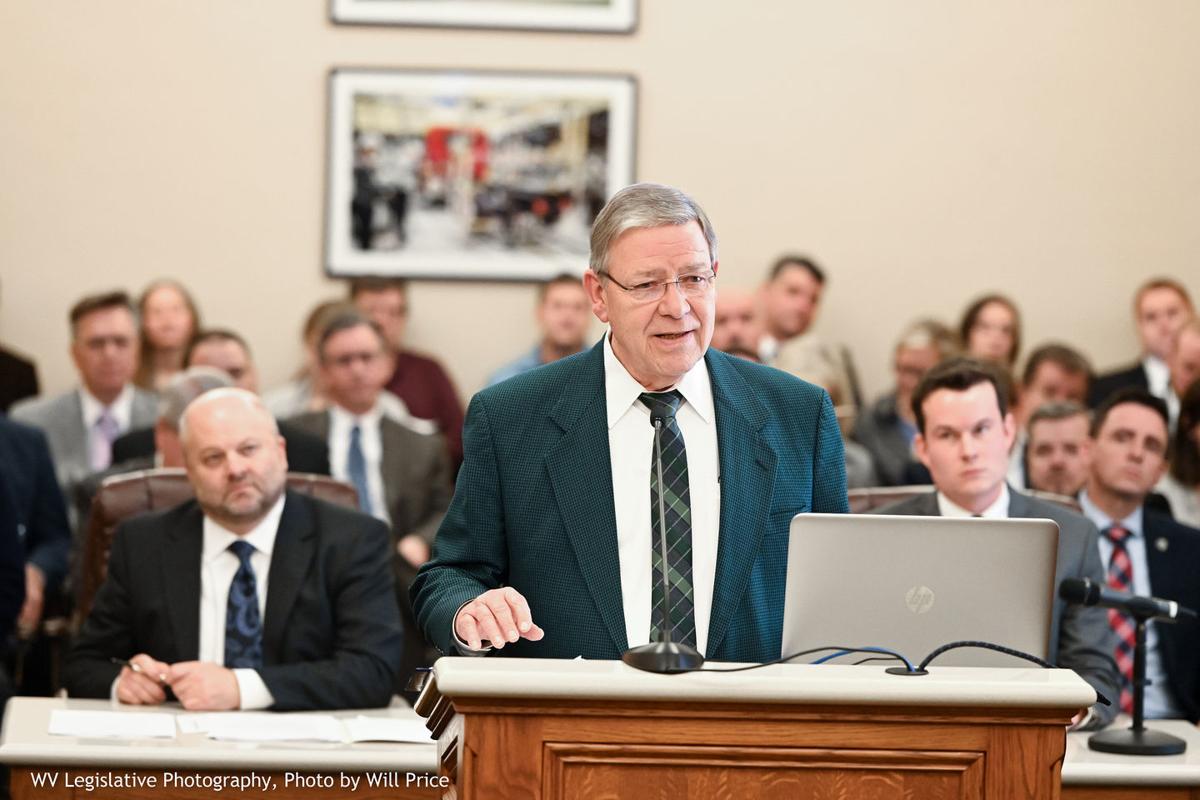 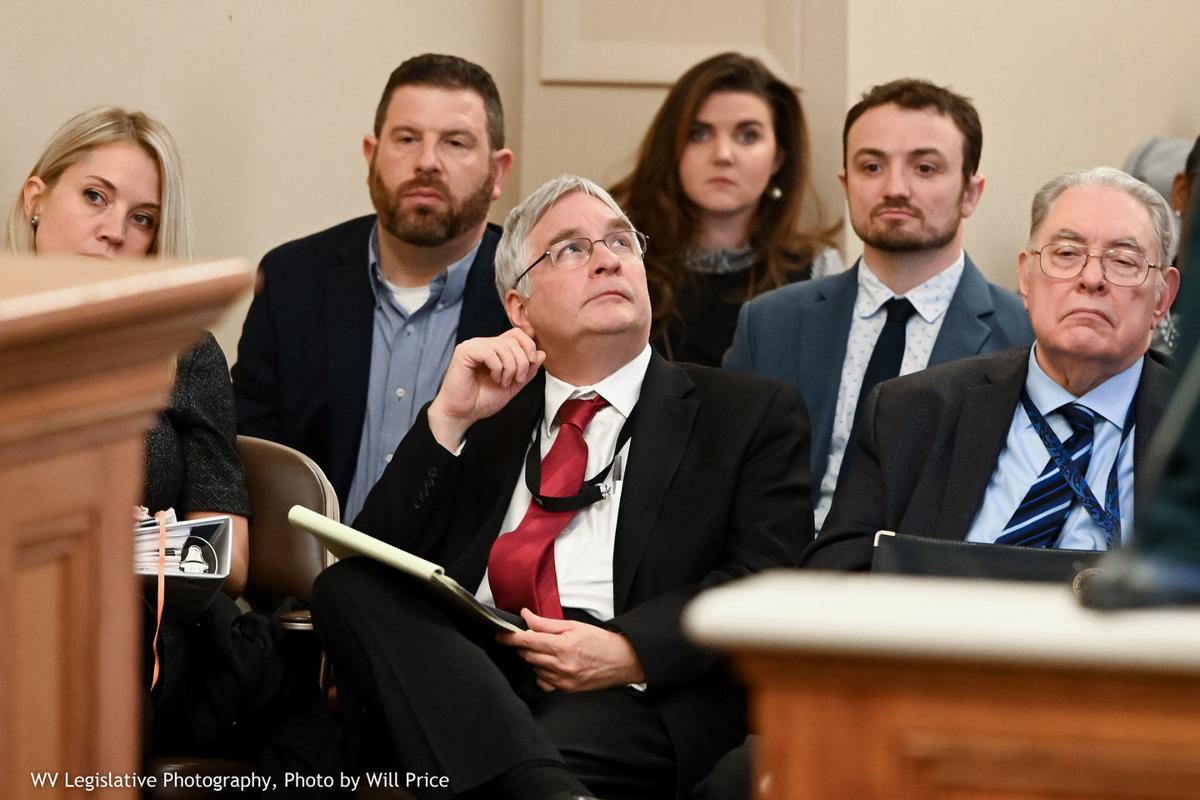 State Deputy Revenue Secretary Mark Muchow (center) listens during a Senate Finance Committee hearing on Monday afternoon. Muchow said for most West Virginia residents, getting rid of the personal property tax on vehicles and raising the consumer sales tax would probably cancel each other out. 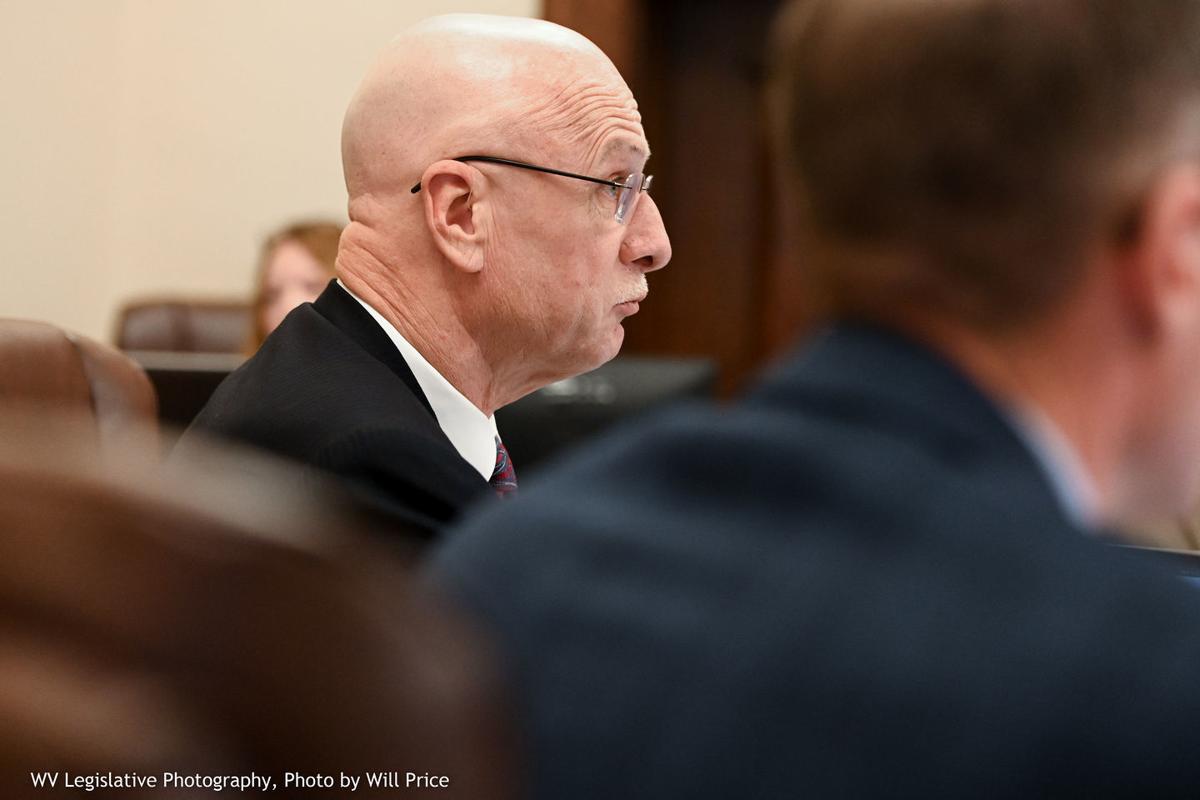 Senate Finance Chairman Craig Blair, R-Berkeley, listens during a committee meeting on Monday afternoon about ways to potential fill in $300 million in revenue that would be lost under proposed tax cuts.

State Deputy Revenue Secretary Mark Muchow (center) listens during a Senate Finance Committee hearing on Monday afternoon. Muchow said for most West Virginia residents, getting rid of the personal property tax on vehicles and raising the consumer sales tax would probably cancel each other out.

Senate Finance Chairman Craig Blair, R-Berkeley, listens during a committee meeting on Monday afternoon about ways to potential fill in $300 million in revenue that would be lost under proposed tax cuts.

West Virginia Senate Finance Committee members tried Monday to sweeten a tax break for manufacturers by adding phase-outs of taxes for other businesses and personal property taxes on automobiles, but they struggled to find the money to make up for the revenue lost from those tax cuts.

Committee members discussed increasing consumer sales taxes, and taxes on tobacco and vaping products, but that would raise only about $200 million a year — leaving about $100 million from the proposed tax cuts still uncovered.

“What we’re going to do here is give relief to corporations, and let citizens backfill it with the increase in sales taxes and the cigarette tax,” Sen. Doug Facemire, D-Braxton, said.

Discussion of phasing out the personal property tax on manufacturing equipment, machinery and inventory has been ongoing throughout the session, and long before. But Monday’s attempt to sweeten the proposal, with the additional phase-outs of personal property taxes on automobiles and on nonmanufacturing business inventory, meant the revenue lost from the tax cuts jumped from $100 million a year to about $300 million a year.

A companion bill originated Monday would attempt to make up some of that revenue by raising the consumer sales tax by 0.5 percent, to gain about $116 million a year. Increases on cigarette taxes, noncigarette tobacco taxes and vaping products would raise an additional $88 million a year.

School boards, counties and municipalities rely on property tax revenue and, as they have for years, legislators struggled to say how those public agencies would be made whole under the plan.

The bill sets up a special revenue account to replace the lost money for those entities but, as Sen. William Ihlenfeld, D-Ohio, pointed out, that fund could run out of money in about a dozen years.

An amendment proposed by Sen. Ron Stollings, D-Boone, and adopted by the committee could seemingly make that deficit larger. Stollings’ amendment calls for using an additional $200 million a year to fund state health care programs.

Advocates of phasing out the manufacturing equipment and inventory tax contend that it will encourage business investment and growth, and that growth could close the revenue deficit.

Commerce Secretary Ed Gaunch told the committee that the tax is the biggest obstacle to recruiting and retaining businesses.

“Literally, every week, and sometimes every day, we hear that tax is an impediment to companies coming here,” Gaunch said. “If we can get rid of that, and make local governments whole, I’m in favor of it.”

But Jonathan Adler, executive director of the West Virginia Association of Counties, said the proposal would take away the ability of counties, cities, towns and school boards to levy taxes, and force those entities to rely on the Legislature to give them money each year.

“Our biggest fear is taking taxing authority away from counties,” Adler said. “Certainly, that has us worrying quite a bit.”

Smokers would see a considerable increase in taxes, he said, with a rise from $1.20 to $2 a pack.

Committee members on Monday advanced the joint resolution for a constitutional amendment (SJR 9) and the companion revenue replacement bill to the full Senate.

However, the proposals face an uphill battle. The resolution requires two-thirds passage votes in the Senate and House of Delegates for adoption, at which point it would go on the November ballot for voters to approve or reject.