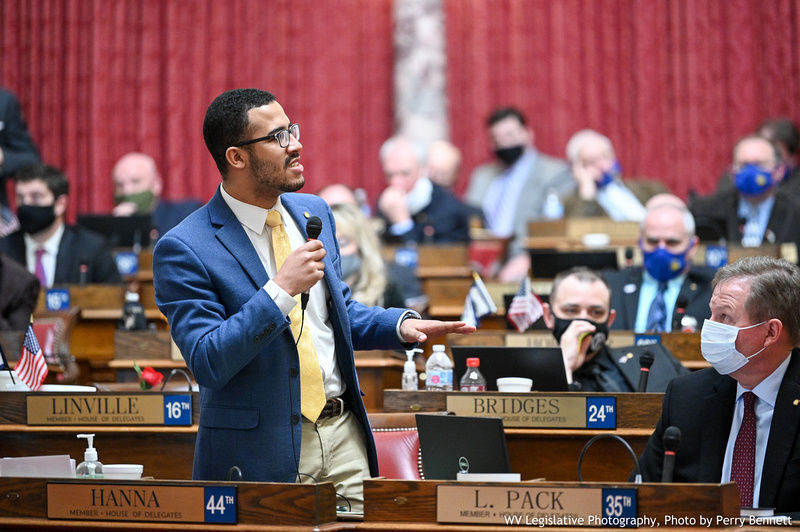 West Virginia Delegate Caleb Hanna, R-Nicholas, addresses the House of Delegates on Friday. Hanna spoke against House Resolution 19, which changes the rules about when members of the House can give general remarks outside of debate for specific pieces of legislation. 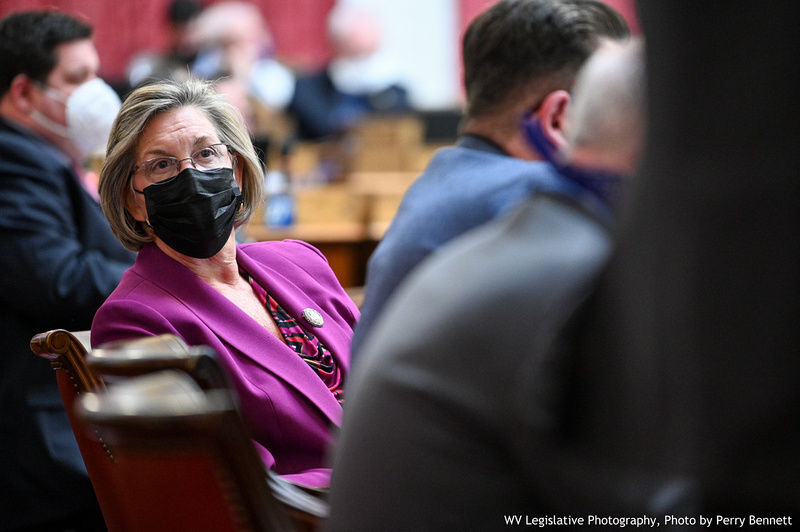 West Virginia House of Delegates Majority Leader Amy Summers, R-Taylor, looks to the front of the House Chamber on Friday. The House on Friday adopted House Resolution 19, which changes the rule about when members of the House can give general remarks outside of debate for specific pieces of legislation.

West Virginia Delegate Caleb Hanna, R-Nicholas, addresses the House of Delegates on Friday. Hanna spoke against House Resolution 19, which changes the rules about when members of the House can give general remarks outside of debate for specific pieces of legislation.

West Virginia House of Delegates Majority Leader Amy Summers, R-Taylor, looks to the front of the House Chamber on Friday. The House on Friday adopted House Resolution 19, which changes the rule about when members of the House can give general remarks outside of debate for specific pieces of legislation.

A temporary COVID-19 protocol for the 2021 West Virginia Legislative Session will carry over at least into 2022, and some lawmakers said Friday the measure could stifle their voices and those of their constituents.

The House of Delegates on Friday adopted House Resolution 19, which will continue to limit the time for delegates to make remarks about events and issues not on the House’s daily agenda.

The House adopted the resolution by a 52-46 margin, with two delegates absent.

No one debated in favor of the amendment.

Under questioning from other delegates, House Majority Leader Amy Summers, R-Taylor, told delegates if they wanted the House to go back to having remarks on a daily basis to vote against the measure and to vote for it if they wanted to keep things the way they are.

People speaking against the resolution said they understood why the amendment first existed on a temporary basis, but they said the COVID-19 pandemic had been used an excuse to advance political agendas without substantial public input and limited lawmakers’ voices as well as those of their constituents.

“I believe Winston Churchill said ‘Never let a good crisis go to waste,’” Delegate Mike Pushkin, D-Kanawha, said. “I’ve seen a lot of that, unfortunately, this session. I’ve seen a lot of that where we’ve kept the Capitol largely closed while most businesses have been reopened through executive order by the governor. The schools are open. The Capitol is still closed.”

Under the amended rule, which allows the House Speaker to designate times for delegates to speak, the House has allowed for remarks by members once a week, usually Wednesday evening after the daily session and committee meetings have ended.

House Minority Whip Shawn Fluharty, D-Ohio, said having the early evening once weekly session for remarks was limiting the delegates’ right to speech on the House floor.

“The entire intent of this is just to hide everything that’s going on down here,” Fluharty said. “Nobody’s coming in and speaking. We know that. We hid it behind COVID. COVID is an excuse for everything, and now we’re just going to move things forward in a way that lacks transparency.”

The resolution specifically upheld an amendment made to Rule 65 in the House Rules. Rule 65 establishes the House’s order of business, and remarks by members traditionally have been practiced toward the end of each day’s session.

Remarks by members aren’t required to be related to any particular piece of legislation, but members typically use that time to call attention to certain bills or events happening within their districts.

This year, the House adopted what had been a temporary amendment to that rule, which allowed for the Speaker of the House to designate a time for remarks. That amendment was in effect until the 57th day of the session, which will be Wednesday.

Under the previous rule, remarks were a daily part of the House’s agenda.

The resolution the House adopted Friday extends that rule until the end of the current session and into the 2022 legislative session.

Delegate Caleb Hanna, R-Nicholas, said Friday it was the duty of lawmakers to hear concerns from each other’s communities.

“I know each of us are busy, but our time is not so valuable that we can’t listen to each other,” Hanna said. “If you have a problem with sitting on the floor all day, I would just ask you to ask yourself, why did you run? Why did you run? And if you don’t think you could sit here and listen to the other members, I would just ask yourself that question again when you decide to come back in ’22.”

Delegate Brent Boggs, D-Braxton, said the change wasn’t consistent with the spirit of duly elected delegates being able to hear from one another and determine which issues they want to pursue.

Boggs and other delegates, including Barbara Fleischauer, D-Monongalia, Larry Rowe, D-Kanawha, and Mick Bates, D-Raleigh, suggested allowing daily remarks but capping the amount of time each delegate could speak.

“We’re missing an opportunity to represent our people in a way I believe is why they intended us to come down here and represent them, so we can be heard,” Boggs said.

“The desk you’re sitting in is not just you sitting behind it,” Pushkin said. “It’s roughly 17,000 West Virginians that you represent. You want to vote to limit their voice in here? You’re voting to limit the people’s speech if you vote for this resolution.”