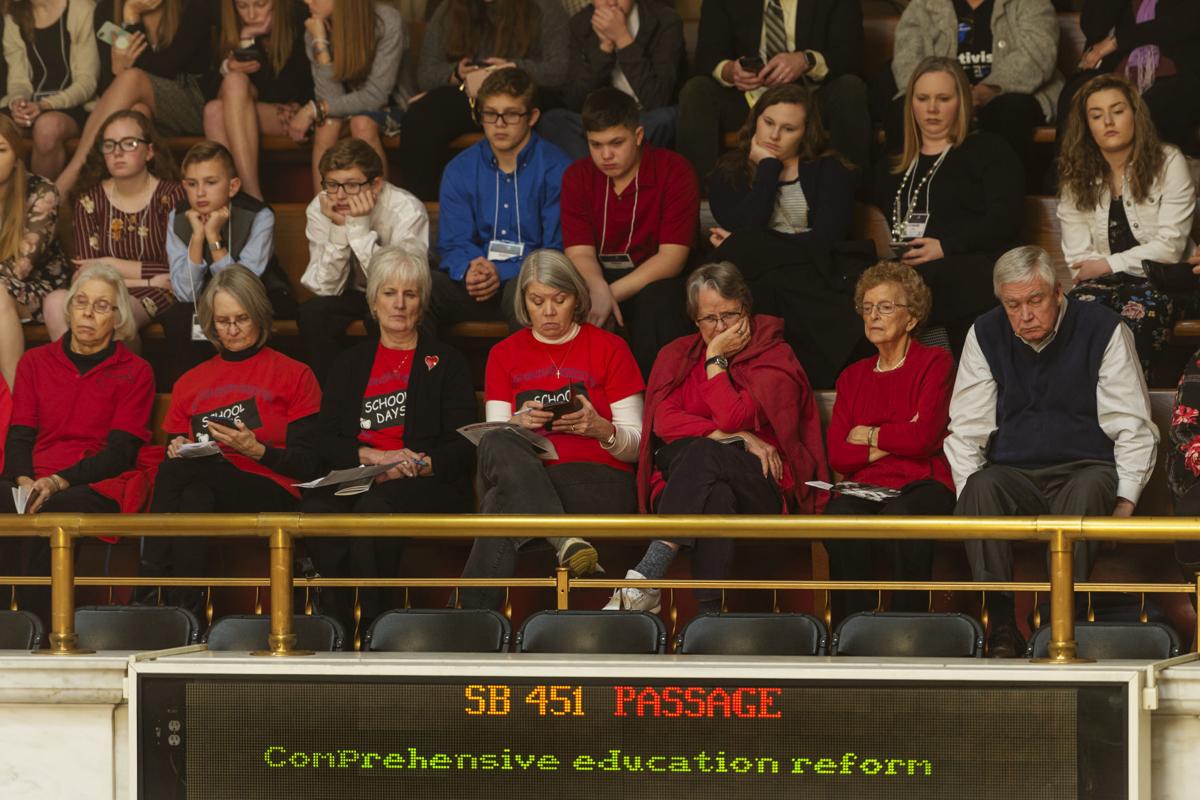 Current and retired teachers, as well as students, from Braxton County sit in the gallery of the House chamber Thursday to watch delegates debate Senate Bill 451 at the West Virginia Capitol. With bipartisan support, the House passed a stripped-down version of the bill the state Senate passed earlier this month.

The House of Delegates passed its version of the Senate bill with a 71-29 vote.

Current and retired teachers, as well as students, from Braxton County sit in the gallery of the House chamber Thursday to watch delegates debate Senate Bill 451 at the West Virginia Capitol. With bipartisan support, the House passed a stripped-down version of the bill the state Senate passed earlier this month.

The House of Delegates passed its version of the Senate bill with a 71-29 vote.

With bipartisan support, the House of Delegates passed a stripped-down version of an omnibus education bill that the West Virginia Senate passed earlier this month.

Now, the Senate will either need to accept the revised bill as is, amend it and send it back to the House, or both chambers will need to bridge the chasm between their versions in a conference committee.

Chief among the differences between chambers: education savings accounts and public charter schools. The Senate’s original bill allows for ESAs and an unlimited amount of charter schools in the state.

The House version nixes ESAs and allows for two charter schools that are narrower in scope than those envisioned by the Senate.

Additionally, the House revision provides $40.5 million in new spending to fund a police officer in every school, and an expanded bonus of $1,000 to teachers who miss fewer than five days of school during the year.

Delegate Daryl Cowles, R-Morgan, voted for the bill Thursday. While he lamented some of the stripped provisions that came over from the Senate, he said the bill provides for more local control, school choice, teacher pay and other reforms.

Likening the omnibus bill to a bowl of chili, he said some good ingredients might be missing, but that’s no reason to pass on the whole stew.

“There are some good things that went into this pot of chili,” he said. “I’d suggest we get ourselves a bowl.”

Delegate John Mandt, R-Cabell, who is married to a teacher, voted yes on the bill and commended the body for finding a road to compromise.

Three Republicans — Jim Butler of Mason County, Pat McGeehan of Hancock County and Tony Paynter of Wyoming County — joined a contingent of Democrats in opposing the bill. McGeehan said he did so because the bill violates the one-object rule of the state constitution, and the issues should have been debated on a case-by-case basis.

“The single-object provision that was stuck in our state constitution was put there precisely to preclude and prevent situations we are now facing, when we have to struggle and weigh some kind of greater good or picking the lesser of two evils,” he said.

About two-thirds (26 of 41 members) of the Democratic caucus voted against the bill. Delegate Shawn Fluharty, D-Ohio, said that, while he commends the work the House Education Committee did to taper it down, it is just a spruced-up version of a bad bill and warned about what could happen in conference committee.

“You took a pile of garbage, and now it doesn’t smell so bad anymore,” he said. “I’m not falling for the tricks; I’m not taking the bait.”

Other pieces of the bill include: pay raises for teachers and school service personnel; incentives for math teachers; funding boosts for smaller schools; and a $250 teacher tax credit for school supplies.

While the House version found support from members of both parties, the Senate had no such luck. Eighteen of 20 Republicans in the chamber voted for passage of its version, with Sens. Kenny Mann, R-Monroe, and Bill Hamilton, R-Upshur, breaking from the caucus to join Democrats.

Assuming the two chambers can find an agreement, Gov. Jim Justice has already said he’s opposed to ESAs, charter schools, paycheck protection, non-severability and other pieces of the bill passed by the Senate. His threat of a veto only further obscures the bill’s path to codification.

Facing opposition from unions, the public education system, Democrats in both chambers and some Republicans, legislative leadership has plunged into the depths of parliamentary procedure to deliver the bill to this point.