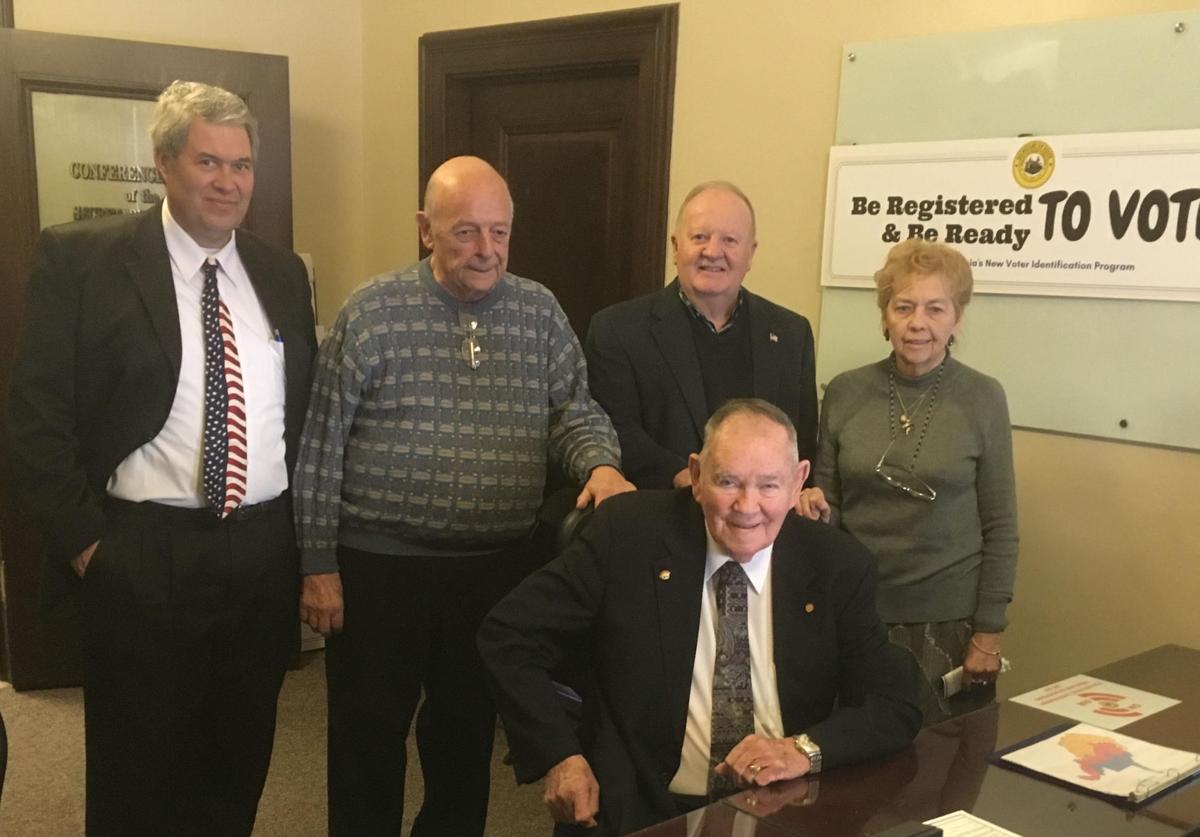 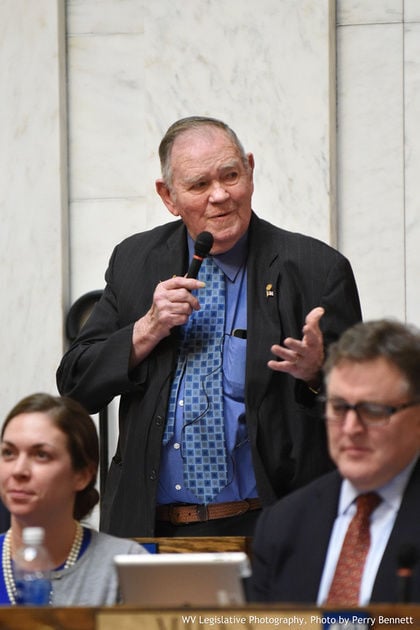 Delegate Shirley Love, D-Fayette, addressed the West Virginia House of Delegates on April 5, 2017. Love, who served in the state legislature for a total of 16 years, died Friday. 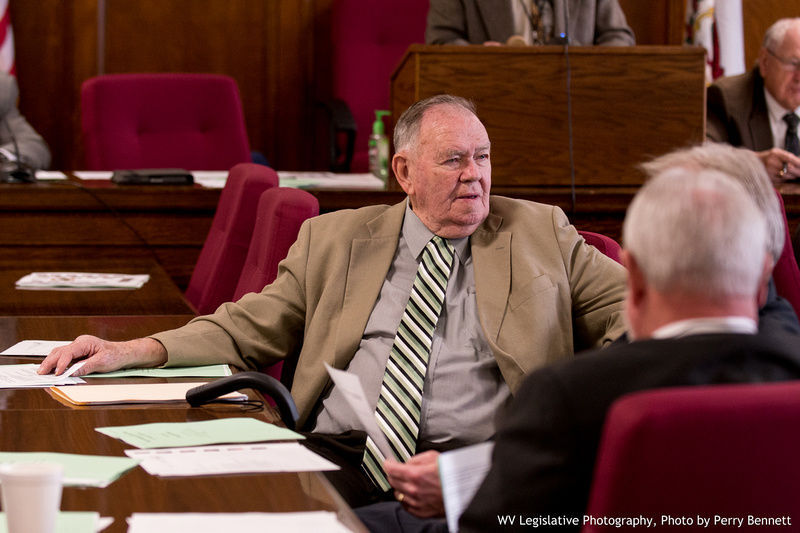 Delegate Shirley Love, D-Fayette, addressed the West Virginia House of Delegates on April 5, 2017. Love, who served in the state legislature for a total of 16 years, died Friday.

As a friend, a colleague, a ‘wrasslin’ enthusiast, people throughout West Virginia remembered longtime lawmaker and broadcaster Shirley Love, who died Friday morning at age 87.

Named for the husband of the nurse who cared for his mother after he was born, Shirley Love grew up and grew old in Fayette County, where he studied to be a machinist and a welder when he was young and ended up becoming a well-known broadcaster for “Saturday Night Wrestlin’” from 1954 to 1977, before serving several terms in the West Virginia Legislature between 1994 and 2018.

Then-Gov. Gaston Caperton appointed Love to temporarily serve in the state Senate in 1994, and Love subsequently won the election to complete the rest of the Senate term the same year.

He went on to serve in the Senate through 2008.

Love again returned to the Legislature in 2016, when he was elected to the House of Delegates. He served a term there before an unsuccessful campaign for West Virginia’s 3rd Congressional District seat in 2018.

West Virginia Sen. Stephen Baldwin, D-Greenbrier, posted to Facebook on Friday, saying he first met Love when they served in the House of Delegates together in 2016.

“I felt like I was meeting a legend,” Baldwin said in his post. “As a wrestling fan, I’d seen many replays of “Saturday Nite Wrestlin’” in Fayette County. Shirley was the star of that show, because of his sincerity and charisma.”

“Shirley had a voice of gold. And a heart to match,” Baldwin said. “He reminded us what really mattered. He was a wise soul who will he dearly missed by a region he served faithfully for decades.”

Sen. Joe Manchin, D-W.Va., who served in the state Senate with Love, called him an “incredible broadcaster.” Manchin said he and his wife, Gayle, send their hearts out to the late senator’s family.

“I consider myself lucky to have called Shirley a dear friend, and I know I am not alone in my admiration and respect for Shirley and his work. Gayle and I, along with all West Virginians, especially those in Fayette County, will keep Shirley’s family, friends, loved ones and community in our prayers.”

Love was born in May 1933 to Earl and Winona Love.

In 1994, Love recounted to then-Charleston Gazette reporter Susan Williams that his mother was under the nursing care of the wife of the Rev. Shirley Donnelly when he was born. The Donnellys’ son had recently died, and Mrs. Donnelly commented that the infant Shirley Love looked like her late son, so “Love inherited the famous preacher’s name,” Williams reported.

He graduated from Collins High School in 1952.

When he ran for Congress in 2018, Love listed his education as “Public High School, University of Hard Knocks” in a candidate biography for The Herald-Dispatch of Huntington.

A man best known for his voice on the radio, in television and in the marbled halls of the West Virginia Capitol, Love was a singer in church, and he first began working in broadcasting as an announcer for “Chapel Hour” for Oak Hill television station WOAY. He also reported local news stories for the station.

Love told the Charleston Gazette in 2009 that covering the Sitlex Mine explosion near Mount Hope in 1966 was one of the greatest experiences he’d had as a reporter, but “it was a sad day.”

Love went from Chapel Hour to working as a news director, a sports director, announcer and, later, as an account executive for the station.

But it was his work as the wrasslin’ announcer for “Saturday Night Wrestlin’” that people most recall about Love.

“It was a Southern West Virginia Saturday night opera,” Love said in 1994, noting that the wrestling show had a longer television run than “Gunsmoke.”

On the advertising side of his job, Love found his way into politics, first selling ads for politicians, to endorsing them, then becoming one himself.

“I’d latch onto someone who wanted to do some good for the county,” Love said in 1994. “Everyone should participate in politics.”

On his days off from the television station, Love sold Electrolux vacuum cleaners. He said he sent his kids to college on the money he earned from his second job.

Love joined the Fayette County Democratic Executive Committee in 1972. He remained mostly behind the scenes until Caperton appointed him to the Senate in 1994. The appointment came after Charles S. Smith resigned less than a month after being appointed to replace Robert Holliday, who said at the time that he’d been forced out of office.

Love told the Gazette-Mail in 1994 that his work in broadcasting helped him gain insight into the problems of the communities he would go on to represent in Charleston.

“A pothole in front of someone’s house is just as important to that community of 20 as a superhighway is to an 18-wheeler,” Love said. “I grew up with these people on television. They were on one end of the tube, and I was on the other. I never saw these people before, but I was always glad to see them when we met. I just hope I can relate to them in a meaningful way.”

Delegate Kayla Kessinger, a Republican who also represents Fayette County, tweeted that she was heartbroken to hear the news of Love’s death Friday.

“I loved serving with him and always admired his genuine love for Fayette County,” she said. “He was the embodiment of a public servant that all elected officials should strive to emulate.”

Delegate Josh Higginbotham, a Republican from Putnam County, said Love was “one of the most kindhearted gentlemen I’ve ever served with.”

“As a Democrat, he was willing to work with Republicans, share a warm story, & a laugh,” Higginbotham said in a tweet. “Keep his family in your thoughts and prayers.”