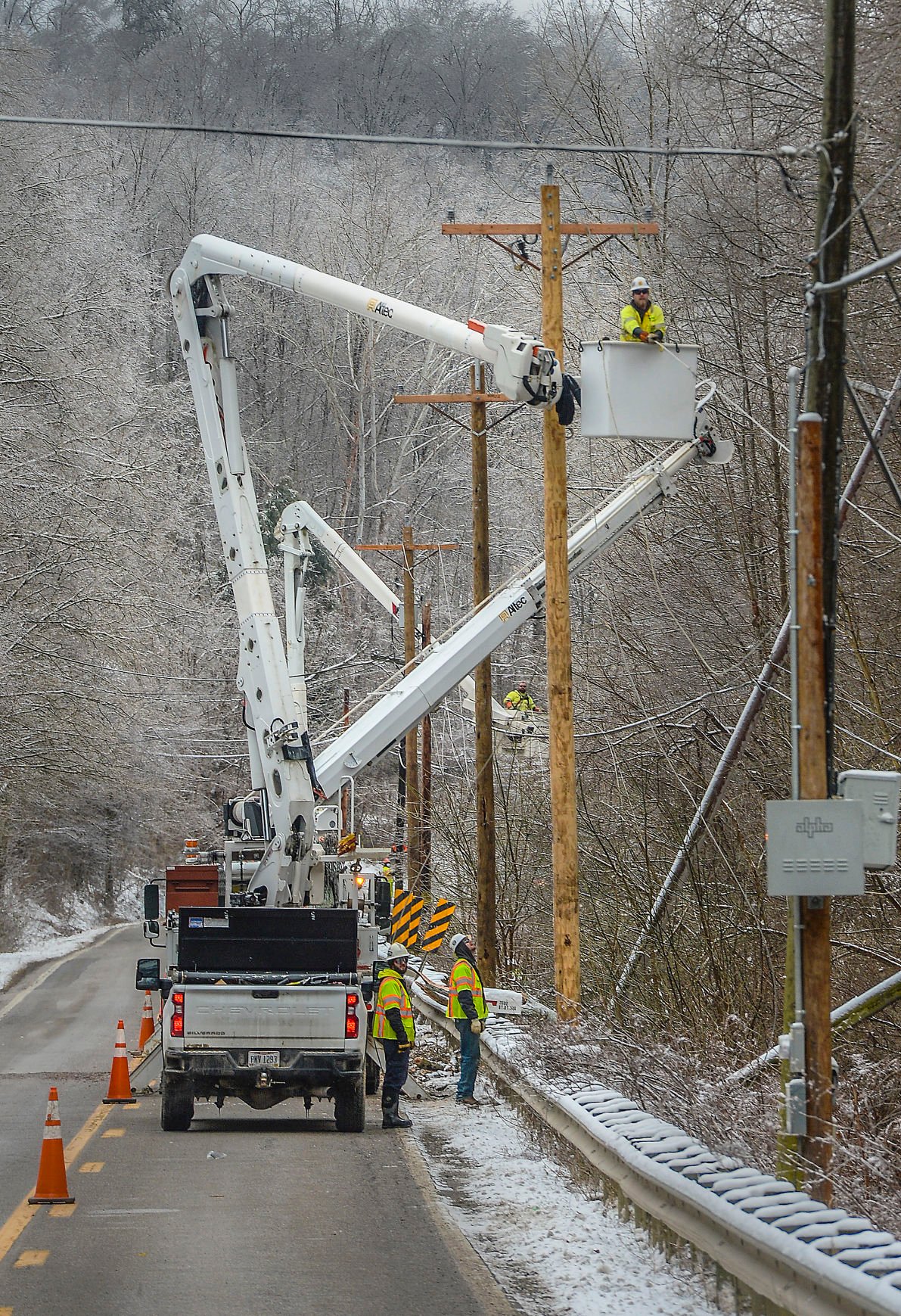 Crews work to repair power lines along W.Va. 34 near Hurricane on Wednesday. 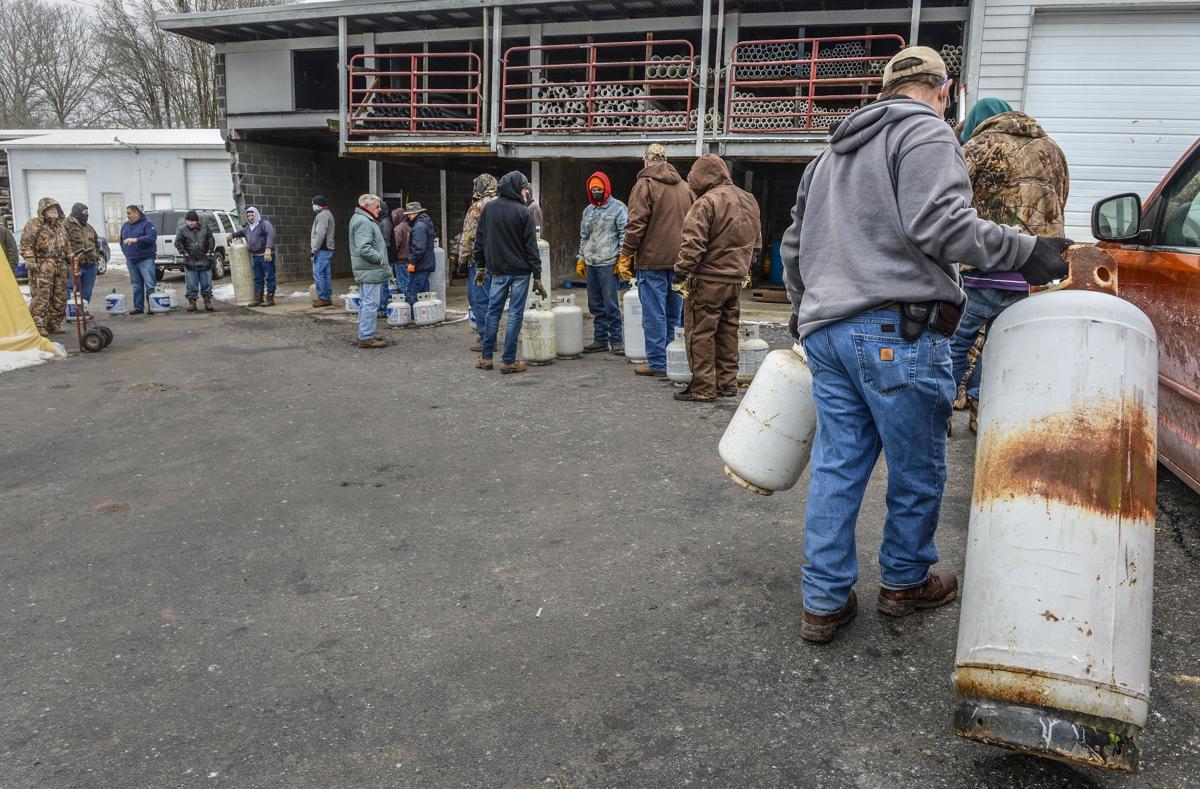 Residents lined up at Teays Valley Hardware to refill their propane tanks Wednesday.

Crews work to repair power lines along W.Va. 34 near Hurricane on Wednesday.

Residents lined up at Teays Valley Hardware to refill their propane tanks Wednesday.

The sun emerged from a curtain of clouds for the first time in a week on Wednesday, as repair crews across Western West Virginia gained ground in their struggle to restore power to more than 97,000 homes and businesses knocked off the grid in the wake of a nonstop wave of winter storms.

By midday, electrical service had been restored to about 30,000 of the 97,000 Appalachian Power customers left without power when the storms peaked on Monday — just in time for the arrival of a new winter storm packing wet, heavy snow to bring more trees and limbs down atop power lines.

According to a winter storm warning for the area issued by the National Weather Service, the new storm is expected to produce periods of moderate to heavy snow through the night Wednesday and into Thursday morning, “which will likely cause additional power outages, especially in areas hard hit by recent ice storms.”

The snow is expected to mix with rain later in the day Thursday, then turn to all-snow Thursday night and early Friday. Total snow accumulations from the storm are expected to range from 4 to 6 inches in the southwestern counties, with 6 to 10 inches likely in the eastern mountains.

On Wednesday, more than 1,500 men and women were working 16-hour shifts repairing power lines, poles and substations from Wayne County to Mason County along the Ohio River, and the inland counties they adjoin.

Ice began accumulating on tree limbs and power lines in the area when the first in a series of winter storms swept into the state Feb. 10. On Wednesday, thousands of those living in the counties hardest hit by the ice storms were facing the start of a second week without electricity and a new, more localized round of outages, along with an assortment of roads blocked by ice-toppled trees.

In Putnam County, W.Va. 34 between its intersection with U.S. 35 and the town of Winfield was closed throughout the day by ice-downed pine trees, while dozens of secondary roads were temporarily blocked by hundreds of toppled trees.

In Cabell County late Wednesday, more than 25,000 Appalachian Power customers lacked electricity, while in neighboring Wayne County, nearly 17,000 homes and businesses remained in the dark. Outages in Putnam County late Wednesday totaled more than 8,800 while in Lincoln County the number was 6,141; Jackson, 3,500; Mason, 3,400; and Kanawha, 1,174.

At least 15 warming stations and shelters were operating in the area Tuesday and Wednesday, including one at the Teays Valley Church of God, in Scott Depot, where 17 people whose homes lacked power spent Wednesday.

“Some spent last night and all day today here, while others spent a few hours here to warm up and charge their cellphones,” said Tom Pratt, one of the church’s pastors. “We have room for more, and anyone’s welcome. The Red Cross brought us 50 cots, and we have 17 beds set up now.”

“My power’s been out for a couple of days, and then I ran out of gas for heat in the middle of the night,” said one of the shelter’s occupants, Lynna Skaggs of Sycamore Ridge, near Hurricane. “I called the [Putnam County] EMS, and they came out to pick me up, but they had to cut through a lot of tree branches to get to my place.”

Skaggs said she is thankful for the EMS providing her with a way to reach the shelter, and to the church for making her welcome.

“I slept pretty good here last night,” she said. “It’s good to have a warm place to go to.”

Among those on hand to assist other residents who are stranded and without power were Putnam County paramedic Errin Ballard and her husband, Scott, a paramedic supervisor, who had been on the job nonstop since Monday morning.

“The fire departments in the county have been the saving grace in this storm,” Errin Ballard said. “They saw up trees and carry patients over ice, and use their four-wheel-drive trucks to get people in from hard-to-reach places.”

The Ballards had been scheduled to begin a vacation Wednesday, but instead spent the day on the job.

“We’re going to Blackwater Falls to go sledding,” she said. The couple booked the trip when the weather was warm, she said. “Now, we could go sledding here, but it wouldn’t be the same.”