A mix of forested hills and former surface mines stretches for miles in this view from the West Virginia Land Trust’s new Mammoth Preserve. 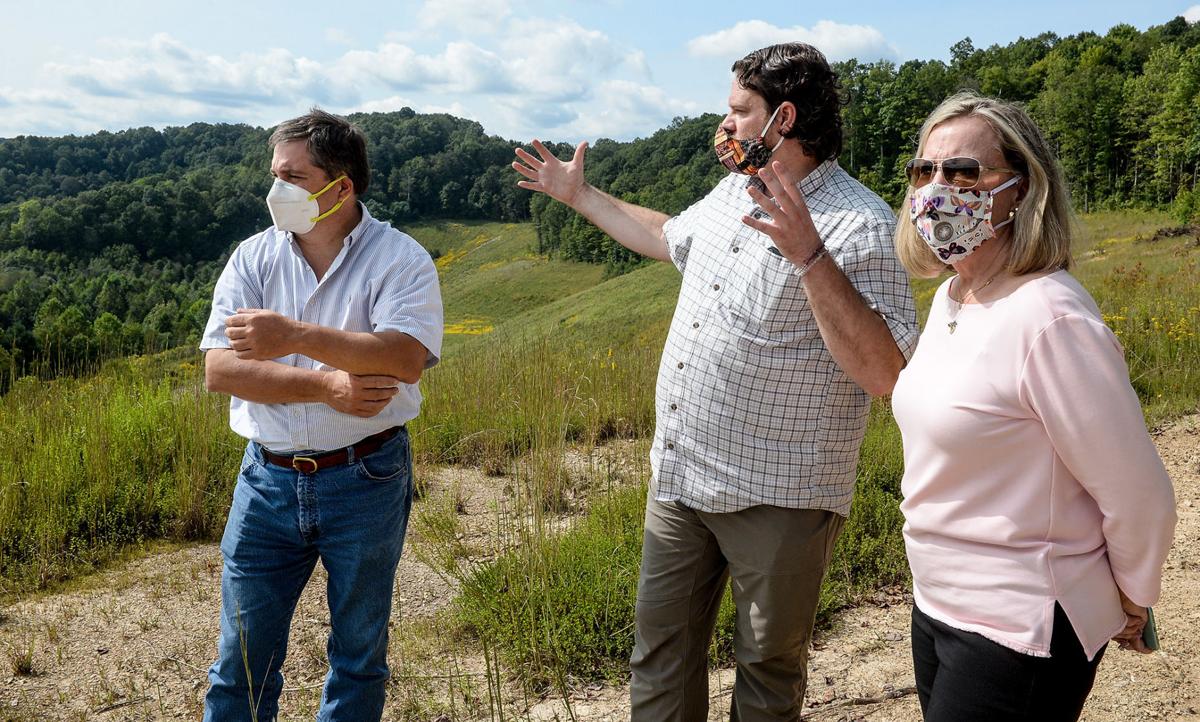 The West Virginia Land Trust’s Ashton Berdine takes a view of the new Mammoth Preserve with Mike Becher of Appalachian Headwaters and Smithers Mayor Anne Cavalier. The preserve encompasses nearly 5,000 acres, most of it in Kanawha County. 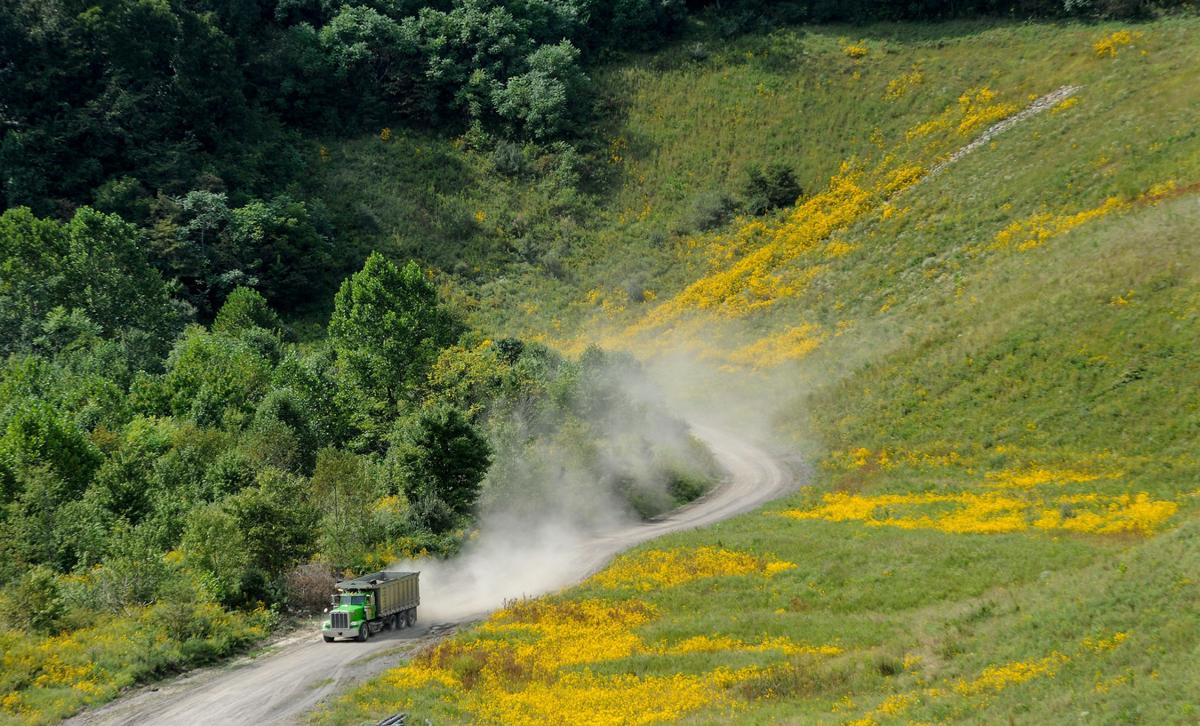 A dump truck hauls gravel to place on an access road to the new preserve, soon to be the site of a major reforestation project. 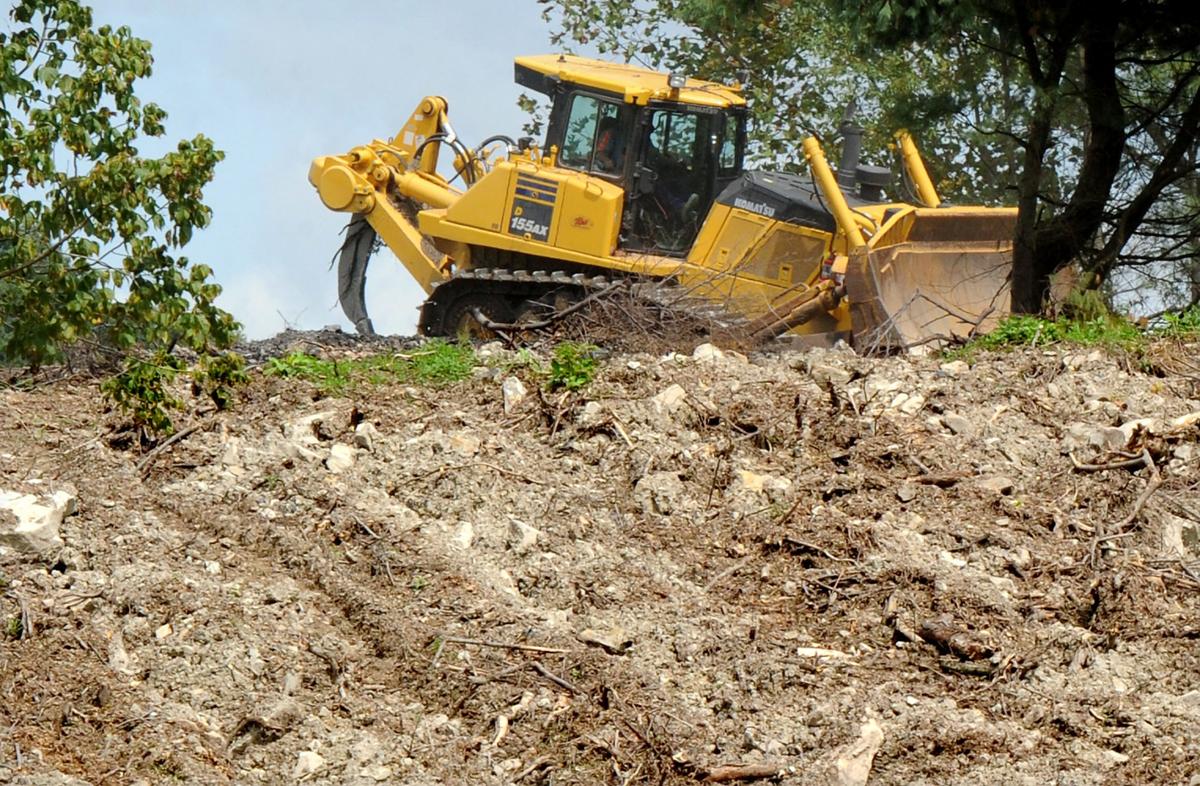 A bulldozer equipped with a ripping bar to loosen compacted soil clears a section of the preserve that had been overrun by non-native trees and shrubs planted during a decades-old reclamation project at the preserve.

A mix of forested hills and former surface mines stretches for miles in this view from the West Virginia Land Trust’s new Mammoth Preserve.

The West Virginia Land Trust’s Ashton Berdine takes a view of the new Mammoth Preserve with Mike Becher of Appalachian Headwaters and Smithers Mayor Anne Cavalier. The preserve encompasses nearly 5,000 acres, most of it in Kanawha County.

A dump truck hauls gravel to place on an access road to the new preserve, soon to be the site of a major reforestation project.

A bulldozer equipped with a ripping bar to loosen compacted soil clears a section of the preserve that had been overrun by non-native trees and shrubs planted during a decades-old reclamation project at the preserve.

A 5,000-acre expanse of woodland and former surface mines along the Kanawha-Fayette County line east of Mammoth is being repurposed as a public recreation area and a demonstration site for post-mining reforestation and stream restoration by its new owner, the West Virginia Land Trust.

Mountain bike and hiking trails are among recreational amenities initially planned for the property, with the first trails likely to take shape in the un-mined segments that make up about half of the tract, named the Mammoth Preserve.

“It’s not wilderness, but it looks pretty wild,” said Ashton Berdine, lands program director for the West Virginia Land Trust, as he took in a miles-long view of wooded ridges and hilltops from one of the new preserve’s highest ridges. At the bottom of a narrow valley between the steep, tree-cloaked spines, the path of Hughes Fork could be seen twisting its way toward the Gauley River, along with the grassy slopes of re-contoured highwalls and mine benches.

“We will be managing this preserve for wildlife habitat, water protection and recreation access,” Berdine said.

“Mountain biking is only going to grow, and here we have room for maybe 50 or more miles of trail,” Berdine said. Trails for hiking are also planned, and paths for horseback riding and sites for camping will likely be considered, he said.

“The preserve also gets us involved with restoration,” he said. “We’re proud to be a part of the restoration of this land and having the opportunity to make it available to the public for recreation and to benefit the local economy.”

The West Virginia Land Trust was given the land and its management responsibilities by another nonprofit, Appalachian Headwaters. Appalachian Headwaters received the tract to use as a demonstration project for reforestation and stream restoration techniques as part of a settlement agreement in a stream pollution lawsuit against Alpha Natural Resources. The suit was filed by the Ohio Valley Environmental Coalition, West Virginia Highlands Conservancy and the state chapter of the Sierra Club, represented by attorneys from Appalachian Mountain Advocates.

Appalachian Headwaters, based in Lewisburg, was formed four years ago to support reforestation of native hardwood forests and restoration of streams on former surface mines. It is working with scientists at Green Forests Work in Lexington, Kentucky, to plan the mix of trees to be planted on mine lands at the Mammoth Preserve.

“The goal is to return the mined land to the closest possible approximation of the forest that was here before the mining took place,” said Mike Becher of Appalachian Headwaters.

Once the blend of nursery-raised young trees is in the ground and growing on about 2,000 acres of former mine land in the preserve, it will be one of the largest, if not the largest, legacy mining reforestation site in Appalachia, according to scientists at Green Forests Work.

Preparation work for reforestation is already underway on about 300 acres of the preserve, where thickets of non-native autumn olive and Russian olive have been dozed into large piles, where they await burning. The two brushy plants do well in rocky, compacted soil, sometimes reaching heights of 20 feet or more, which is why they have been used extensively in the region to satisfy post-mining ground cover requirements.

The preserve lies adjacent to the remnants of Bullpush Mountain, the nation’s first mountaintop removal mine site, which Cannelton Coal began operating in 1970. Most of the mining that took place on the preserve also occurred decades ago, according to Becher.

“Past mine restoration throughout Appalachia often focused on getting anything to grow on these mine sites,” according to Berdine. The two olive species, both native to Asia, have frequently been planted on reclaimed strip mines, along with black locust, pine and certain hardy grasses and legumes, to help anchor the soil.

Where thickets of autumn and Russian olives have been scraped off old reclamation jobs at the Mammoth Preserve, dozers pulling giant, hydraulic “ripper” spikes tear up compacted soil to accommodate the successful planting of young hardwoods. The ripping is done in a crisscross pattern, at least three feet deep into the hardened soil.

“To get trees to grow in the compacted ground, you have at the Mammoth Preserve and other mine sites that were reclaimed as grasslands in the ’80s, you have to rip up the soil,” said Chris Barton, a professor of forest hydrology and watershed management at the University of Kentucky. “Ripping allows the natural infiltration of water to occur again,” he said. “It gives young trees the water they need for growth, and allows seeds from native plants to germinate.”

Without ripping and reforestation with native tree species, former mine sites like the Mammoth Preserve remain in “a state of arrested succession,” said Barton, who founded the non-profit Green Forests Work to help owners of former surface mines plan reforestation. “Our goal is to speed up the natural process,” he said.

Starting in March or early April, young trees will be planted in the land now being processed for reforestation. “We try to mimic the native forest with a blend of 20 to 30 species of trees and native shrubs found in an oak-hickory forest like the one at the Mammoth Preserve,” Barton said.

The return of a natural hardwood forest canopy above the former mine land will also improve water quality in streams crossing the new preserve.

Leaves in the canopy can absorb large volumes of rainwater while dissipating rainfall before it reaches the soil, Barton said, “and trees are deep-rooted and use a lot of water. That means less runoff and less erosion.”

“There are five or six guys operating heavy equipment here now, and later a dozen or so tree planters will be hired,” said Becher, as he watched a dozer with a ripper bar slowly ascending a small slope. “That’s the start of the sustainable economic activity that we’re wanting to make possible on this site. We want to do good for the environment while creating economic benefits for the community.”

“In the long term, we’ll be working with the local towns and county government to find out what they would like to see happening with the preserve and how we can draw more people to the Upper Kanawha Valley,” said Berdine.

Trail development at the Mammoth Preserve “ties into a local initiative Montgomery and Smithers have for new trails on both sides of the Kanawha,” said Smithers Mayor Anne Cavalier, who visited the preserve with West Virginia Land Trust officials on Monday.

“This would be another place to hike and bike you can reach without having to drive for hours,” she said, and maybe stop in Smithers or Montgomery afterward to get a bite to eat. “The best industry to support new development is the tourism industry.”

The preserve stretches from Hughes Creek, a Kanawha River tributary, in the west to a point within one mile of the Nicholas County line in the east near the town of Dixie. Bells Creek forms much of its northern boundary. All but a 400-acre arm of the preserve that extends into Fayette County in the Mount Olive area lies in Kanawha County.

In addition to the Mammoth Preserve, the West Virginia Land Trust has protected more than 10,000 acres of land in the state, including seven public preserves, since it was created in 1994.