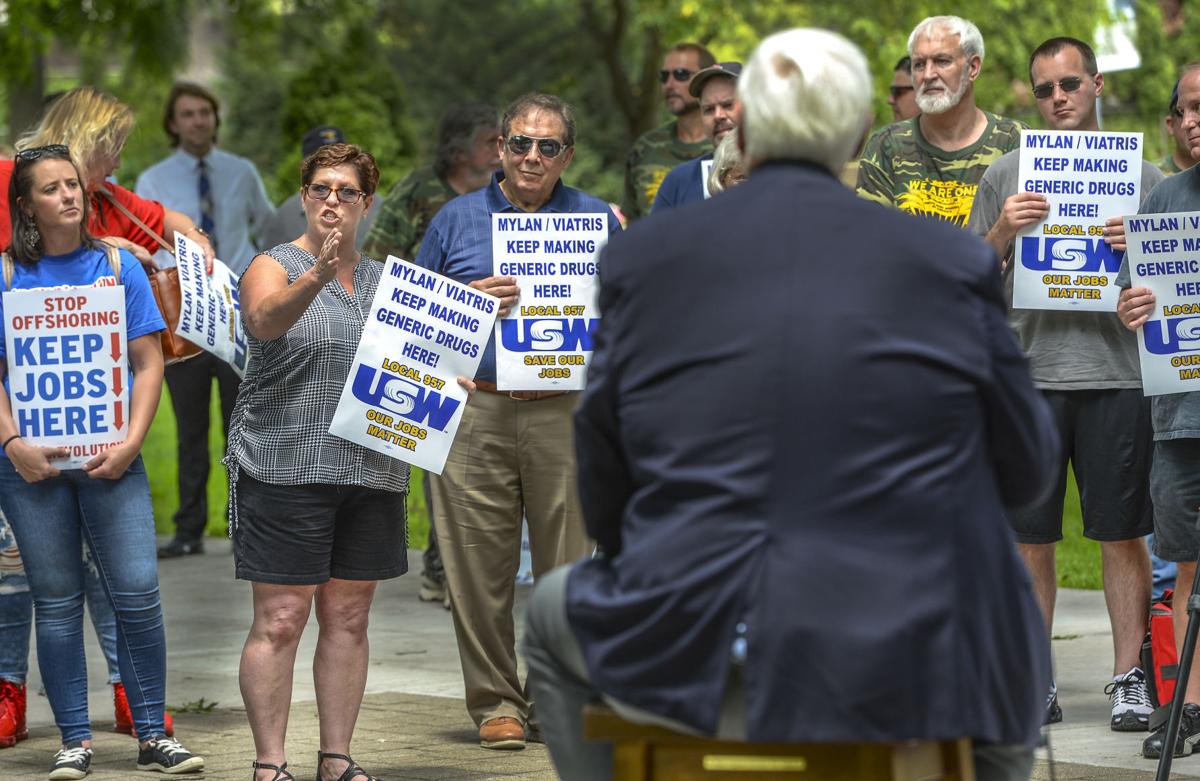 Mylan worker Donna Walls-Ford challenges Gov. Jim Justice to do more in helping the workers fight for their jobs during a protest on Tuesday at the West Virginia State Capitol in Charleston. 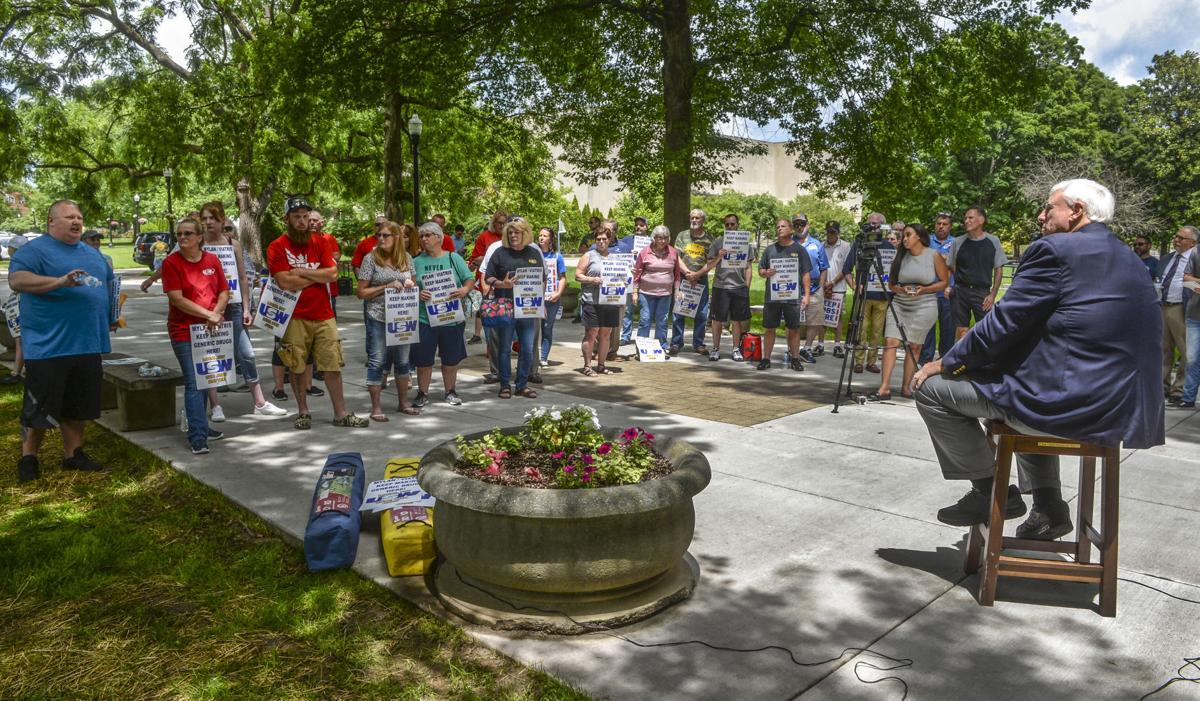 Justice listens to Union Vice President Bill Hawkins (left) offer ideas for the Mylan plant in Morgantown, the closure of which would leave 1,500 union workers without jobs. 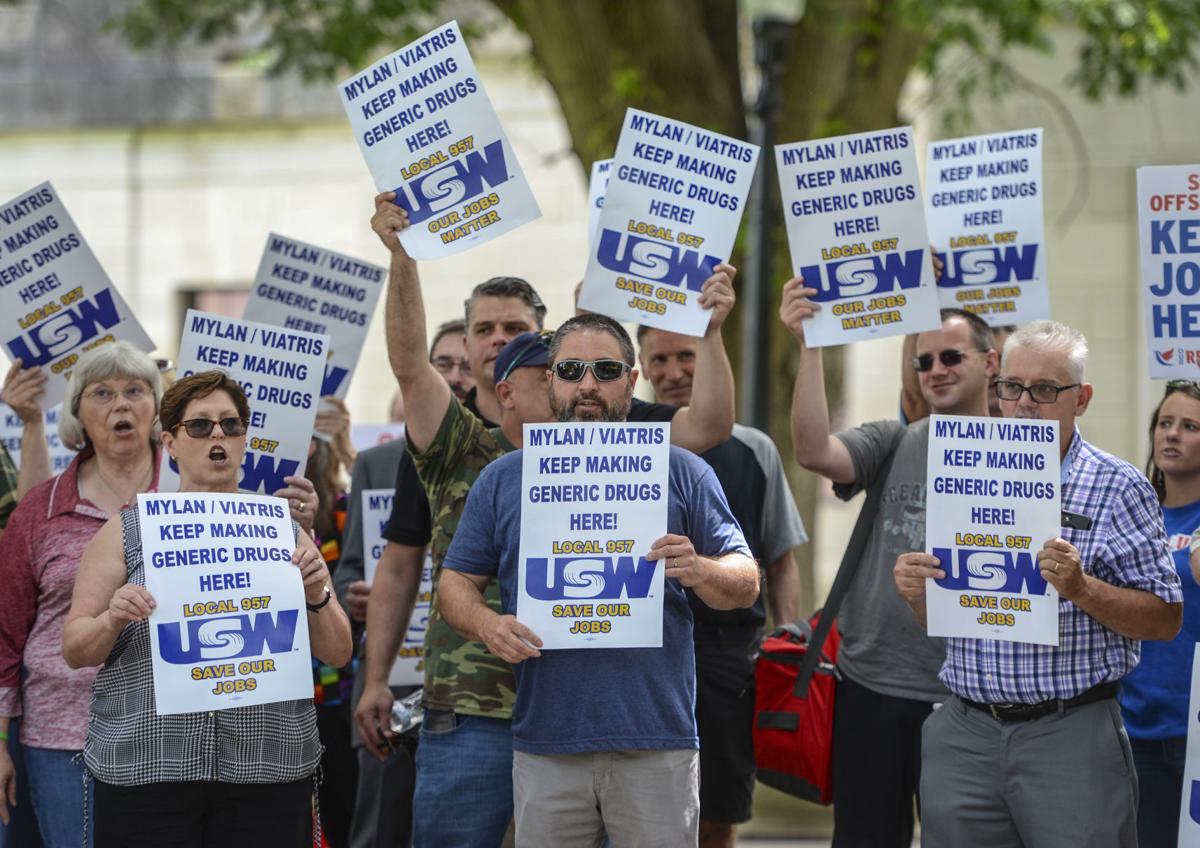 Mylan workers protest outside the Capitol on Tuesday.

Mylan worker Donna Walls-Ford challenges Gov. Jim Justice to do more in helping the workers fight for their jobs during a protest on Tuesday at the West Virginia State Capitol in Charleston.

Justice listens to Union Vice President Bill Hawkins (left) offer ideas for the Mylan plant in Morgantown, the closure of which would leave 1,500 union workers without jobs.

Mylan workers protest outside the Capitol on Tuesday.

Manufacturing workers from Morgantown, and other union groups, protested outside the West Virginia Capitol on Tuesday, calling for Gov. Jim Justice to save the nearly 1,500 jobs to be lost in the former Mylan Pharmaceuticals plant closure set for July 31.

Members of the United Steelworkers Local 8-957 bused to Charleston early Tuesday morning in hopes of speaking with Justice about finding a new operator to purchase the former Mylan plant and keep its workers in place. Several statewide union groups joined the nearly 50 plant workers to stand in solidarity.

While a small fraction of the 850 total union members took off work to travel to the Capitol, that group relayed their colleagues’ concerns to Justice, who spoke to the crowd following his COVID-19 briefing. Set to be out of work Aug. 1, members said they just want a clearer vision of their future.

“I promise you to God above, we are trying all in us,” Justice told the crowd. “We’ve got people that are really, really working it.”

Justice said he could not speak in-depth about conversations with new operators, because they are private entities. But the governor said he and Commerce Secretary Ed Gaunch have spoken with at least two companies that are seriously looking at the facility. One of the interested buyers is a pharmaceutical company, the governor said.

However, Viatris, the corporation formed after Mylan and Upjohn, a company under Pfizer, merged in November 2020, has not yet come to the table for serious discussions, Justice said. While the state has gone to Viatris’ leadership with talks of a potential replacement, Justice said the company hasn’t acted as if it’s looking to make a deal.

“They’ve been difficult to work with,” he said. “[But] I don’t mean that in a really super-negative way.”

While nearly 1,500 workers are set to lose their jobs this summer, the plant closure ultimately will affect about 2,000 families, Justice said, as nearly 500 non-union workers have been laid off since the merger.

“To walk away from 2,000-plus jobs, I mean I hate to say this, but it’s a big-ass deal in West Virginia,” Justice said. “So the least you could do, if you were [Viatris] is be cooperative in every way. Every way.”

Asked by a reporter why he thinks Viatris might be stonewalling talks, Justice said, “I can’t answer that. I really don’t know.”

Justice also said he has not spoken yet with President Joe Biden about the closure. As part of concurrent West Virginia House and Senate resolutions passed last session, lawmakers called on Justice to urge Biden to invoke the Defense Production Act of 1950, to keep the plant in operation. The governor said he did not create the task force lawmakers also called on him to do, saying the group would have gotten nothing productive done.

Donna Walls-Ford, a plant worker nearing her 25th year at Mylan, was one of the few members who pressed Justice on keeping these jobs in the United States. With one of the largest generic drug manufacturers in the world soon to ship their jobs to India and Australia comes further American reliance on foreign drug makers, Ford said, and this is the last thing Americans should want.

Tim Banick, a 14-year worker in the quality department, told Justice that employees were in no way interested in finding new jobs after the plant closes — and even less interested in going on unemployment.

“We even offered to take less wages, if that would help,” Walls-Ford said of Viatris. “They didn’t want to talk about it.”

“Let’s invest in our own company, domestically, with our own tax dollars and stimulus money,” Gouzd said. “Let’s keep it in house. Let’s do something [in] our own interest.”

“Let us work a little bit on that,” the governor replied. “Again, I don’t want to give false hope or anything, but that’s an idea we have got to vet as a possibility. But it’s a good idea.”

Union members have railed against state and federal lawmakers and the Governor’s Office since the closure announcement, saying they’ve been left in the dark.

On Tuesday, Gaunch and union officials spoke privately in the Capitol. Justice said Gaunch will keep the line of communication open between the union and the state as the plant enters its final weeks.