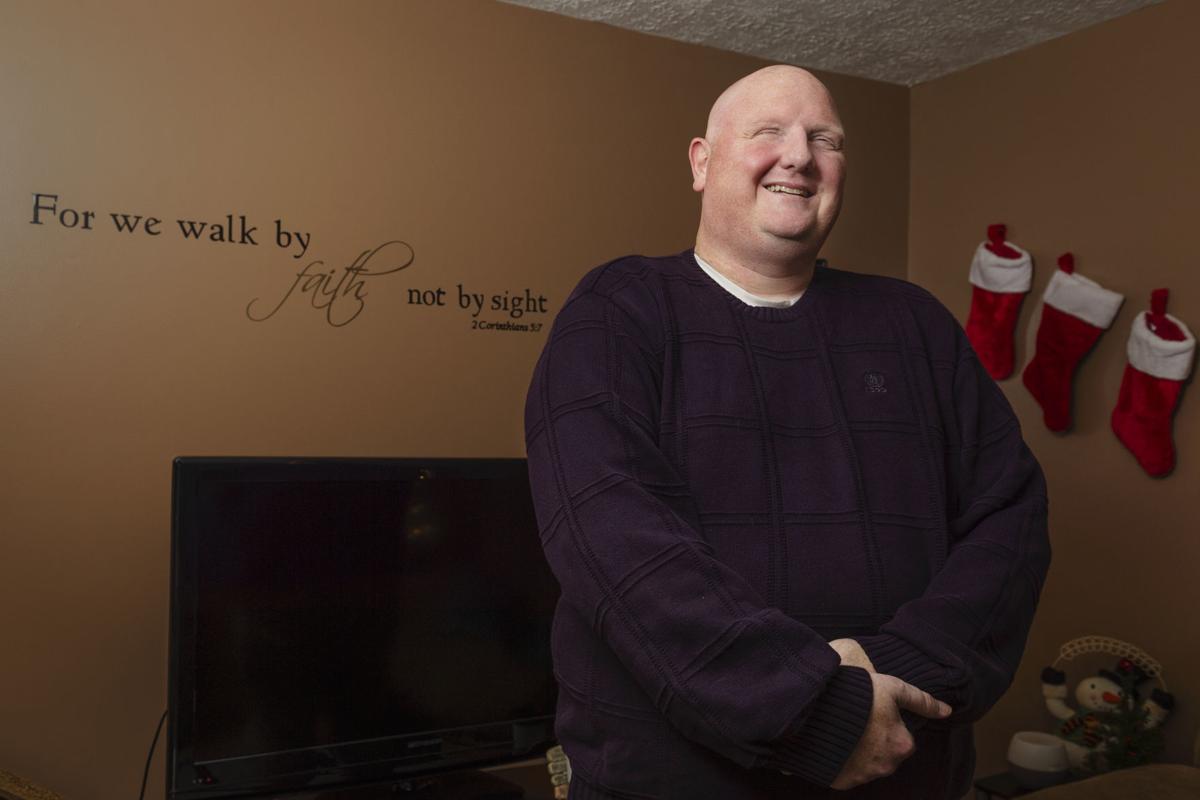 Delegate Eric Porterfield inside his home in Princeton in 2018. Porterfield was blinded in a brawl 12 years ago. 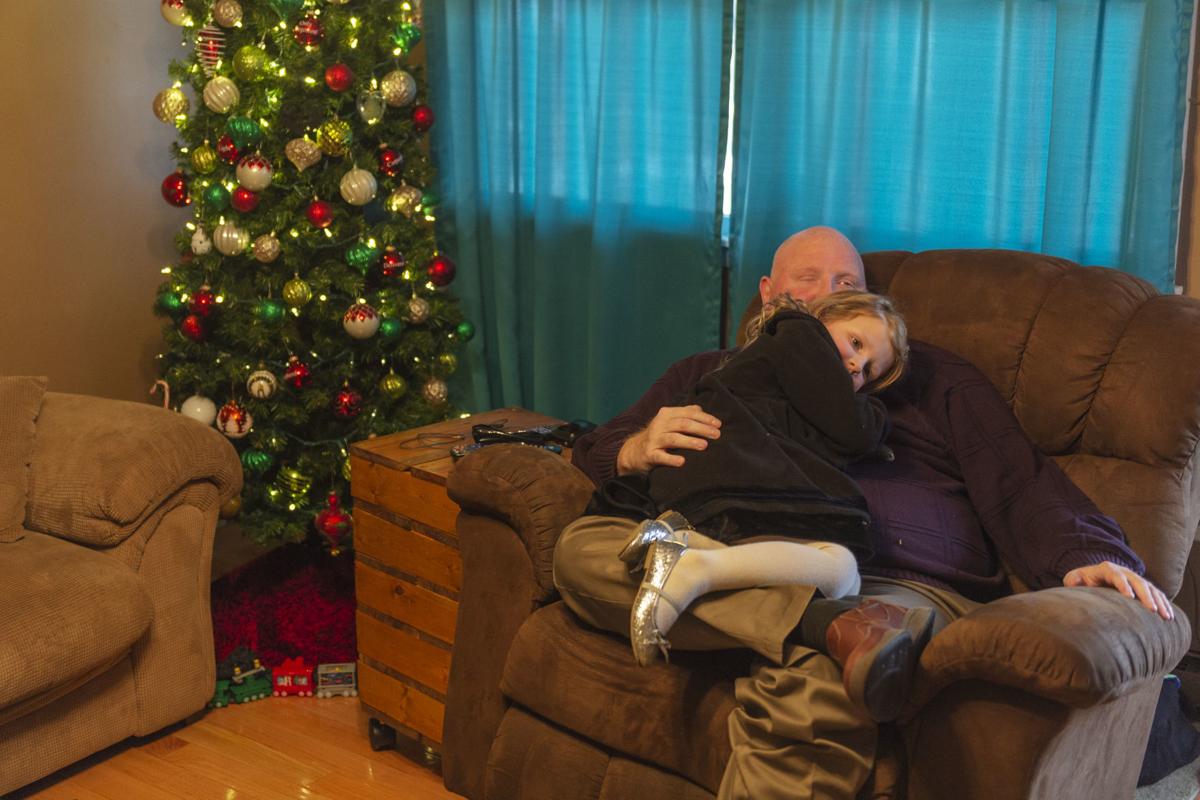 Delegate-elect Eric Porterfield and his 4-year-old daughter, Beth, inside their home in Princeton earlier this month. 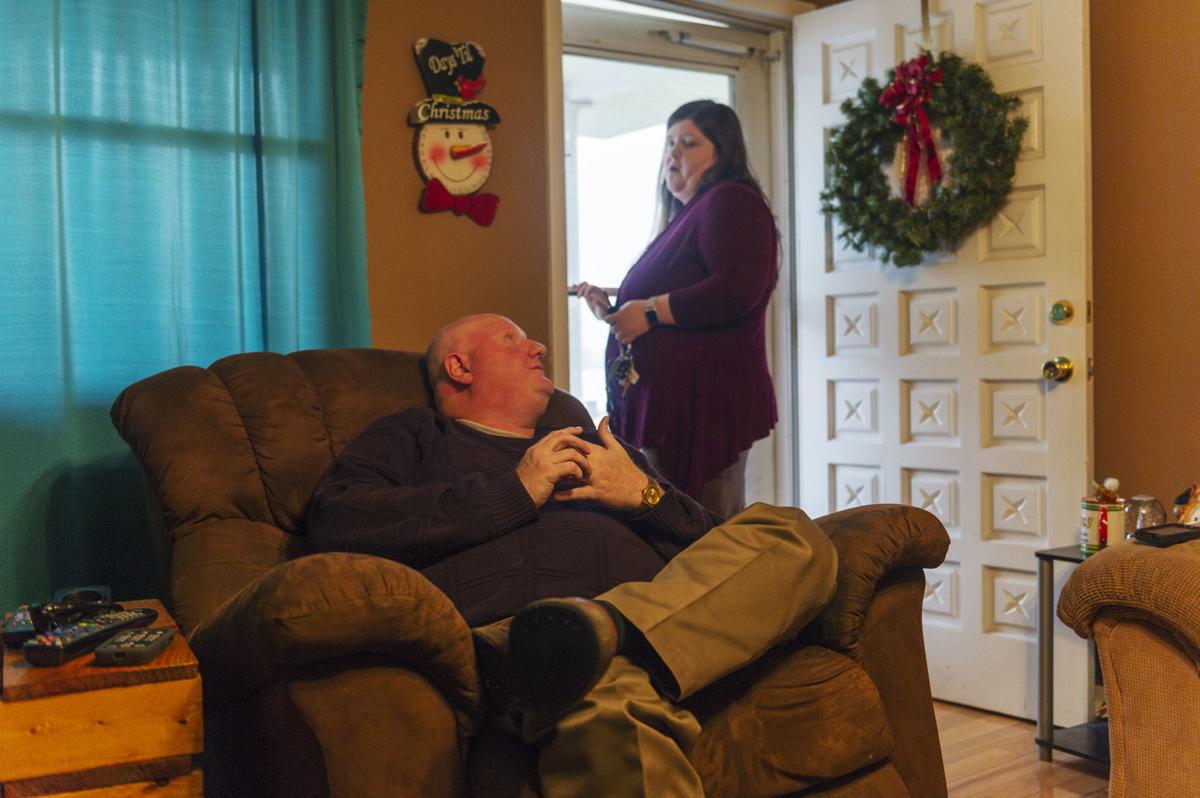 Delegate-elect Eric Porterfield speaks with his wife, Jessica, inside their home in Princeton earlier this month. Porterfield, a Republican, was elected to the House of Delegates in November.

Delegate Eric Porterfield inside his home in Princeton in 2018. Porterfield was blinded in a brawl 12 years ago.

Delegate-elect Eric Porterfield and his 4-year-old daughter, Beth, inside their home in Princeton earlier this month.

Delegate-elect Eric Porterfield speaks with his wife, Jessica, inside their home in Princeton earlier this month. Porterfield, a Republican, was elected to the House of Delegates in November.

PRINCETON – You could learn something about Eric Porterfield by reading the writing on the wall. Literally.

A Bible verse — “For we walk by faith, not by sight” — sits in black text on a partition facing his front door.

Porterfield, 44, was elected in November to serve the West Virginia House of Delegates, after surviving a crowded Republican primary by an eight-vote margin. He believes he will be the second blind member of the chamber. Delegate Robert Hunt, D-Barbour, was the first, elected in 1948.

Having lost his vision in an altercation 12 years ago, Porterfield said, he still hasn’t learned to get around as well as someone who’s been blind since birth, and some tasks take him longer to complete than others.

At the end of the day, the born-again independent Baptist missionary said he’s thankful to God for it all.

“Sometimes there’s just not an A to Z solution; you’ve just got to figure out how to get things done,” he said. “All the things we talk about, I can give these padded answers, but a lot of it, you’ve just got to take it as it comes and goes.”

Porterfield, a Princeton native, founded Blind Faith Ministries, a nonprofit group that conducts missionary trips in places including Sudan, Uganda, Cuba and Brazil. He sometimes travels with the organization, which requires extra work, like arranging transportation or escorts through the airport. This hasn’t stopped him.

While the organization also sometimes helps secure water and food for those in need, Porterfield said its principal focus is “doing the foundational work of what the Bible has told me to do” — baptizing new followers and teaching them the Bible.

“If you try to do everything, you won’t be successful at getting anything done, because the needs there are so overwhelming,” he said.

He said he’d like to be a role model for the blind, but more so for those not afraid to speak their mind.

The road to Charleston

Porterfield said he was first spurred to run for office after a dispute with his family’s OB-GYN, and the actions of a Mercer County magistrate who granted a protective order against Porterfield.

By Porterfield’s account, he saw a Facebook post from the doctor in 2016 favoring abortion rights. He said he told her in a Facebook message that, if she didn’t change to an anti-abortion position, he’d organize an economic boycott of her practice.

The situation escalated to the point of him filming a Facebook video calling for the boycott, and the doctor obtaining a protective service order from Magistrate Sandra Dorsey against Porterfield in court. Mercer County sheriff’s deputies then confiscated guns owned by Porterfield and his wife, Jessica.

According to a copy of the order’s dismissal, which Porterfield provided along with the initial order and public posts, Porterfield did not make any threats of physical harm, and all of the Porterfields’ weapons were returned.

Still, Porterfield resents the actions of Dorsey, whom he called an “Oregon liberal,” even though she was elected as a Republican.

“Those are the kind of things why guys like me need to be in politics, because our local party would never back someone like that if they knew their ideology,” he said.

Another thing that spurred him to run was the Youth Mental Health Protection Act. The 2018 bill, had it passed, would ban the practice of conversion therapy on minors.

Conversion therapy, which seeks to change a person’s sexual orientation or gender identity, has been condemned by a wide range of medical groups, including the American Medical Association and the American Psychiatric Association. The bill to ban it had bipartisan support, and several lawmakers attributed its failure to resistance from then-House Speaker Tim Armstead, R-Kanawha.

For Porterfield, it’s an issue of free speech.

“To tell someone they cannot counsel from a certain perspective without offering certain behaviors is just ludicrous,” he said. “I don’t understand how anyone could be that bigoted and discriminatory.”

Other issues drew him in, as well. He supported repealing the prevailing wage, he supports right-to-work, he wants to protect Americans’ right to bear arms.

“Environmentalists, LGBT, gun-control activists, pro-choice, they want to tell us all how we have to live,” he said.

Porterfield lost his sight at 32 years old. He won’t say exactly what happened, but it was the result of trauma, and it occurred 12 years to the day before he took his oath of office.

“I can’t fully get into all the details of it, because there’s still some stuff pending on it, but a major altercation with a multitude of men ended up leaving me instantaneously blind on December the 10th, 2006,” he said.

Coming to terms with a life without vision didn’t happen easily. He said it was a rough first Christmas, knowing that, save for some new feat in medicine or biotechnology, he would likely never see again.

As time went by, he started to work things out. He uses a cane to get around. His brother and sister-in-law live across the street and look out for him. He relies on technology to help with emails and texts. He’ll probably hire an assistant for the legislative session. And even without a sense of sight, he said he still lives better than 90 percent of the world.

“Adjusting to that was very, very tough, spiritually, mentally, physically and psychologically,” he said. “But with the help of the lord, my family and support system, we managed and started to work through it.”

It was only after he went blind that he met his wife, Jessica, who is now the mother of their two children.

The term disabled, he said, isn’t an offensive term to him, it’s just a reality. He keeps a light touch about things — he can’t drive, he said, “until they get that Braille windshield perfected.”

The general rules are easy enough to follow, he said — treat people with respect.

“If there’s things I missed, that you’re sighted and you mock or make fun of those things, then you’ll make me mad and upset me greatly, because all it is is I might need a little extra time or need to look at something here, or I’ve got eyes for me,” he said. “A lot of life is not rocket science that we complicate.”

At just 4 years old, Porterfield’s daughter, Beth, has a philanthropy endeavor of her own: “Beth’s Blessings,” an extension of Blind Faith, was created to provide farm animals and other goods to Africans during Christmastime.

Porterfield also has a son, John Rex Porterfield III, who’s now just a few months old. They both have the same birthday, June 6, the same day that, in 1944, Allied forces invaded the beaches of Normandy, France, during World War II.

“I live in freedom and don’t speak German today because of that,” he said.

Porterfield likes to talk (“as a preacher, I’m one of the long-winded ones”) and has no qualms saying what’s on his mind: “Wait till they get a hold of me in the Legislature.”