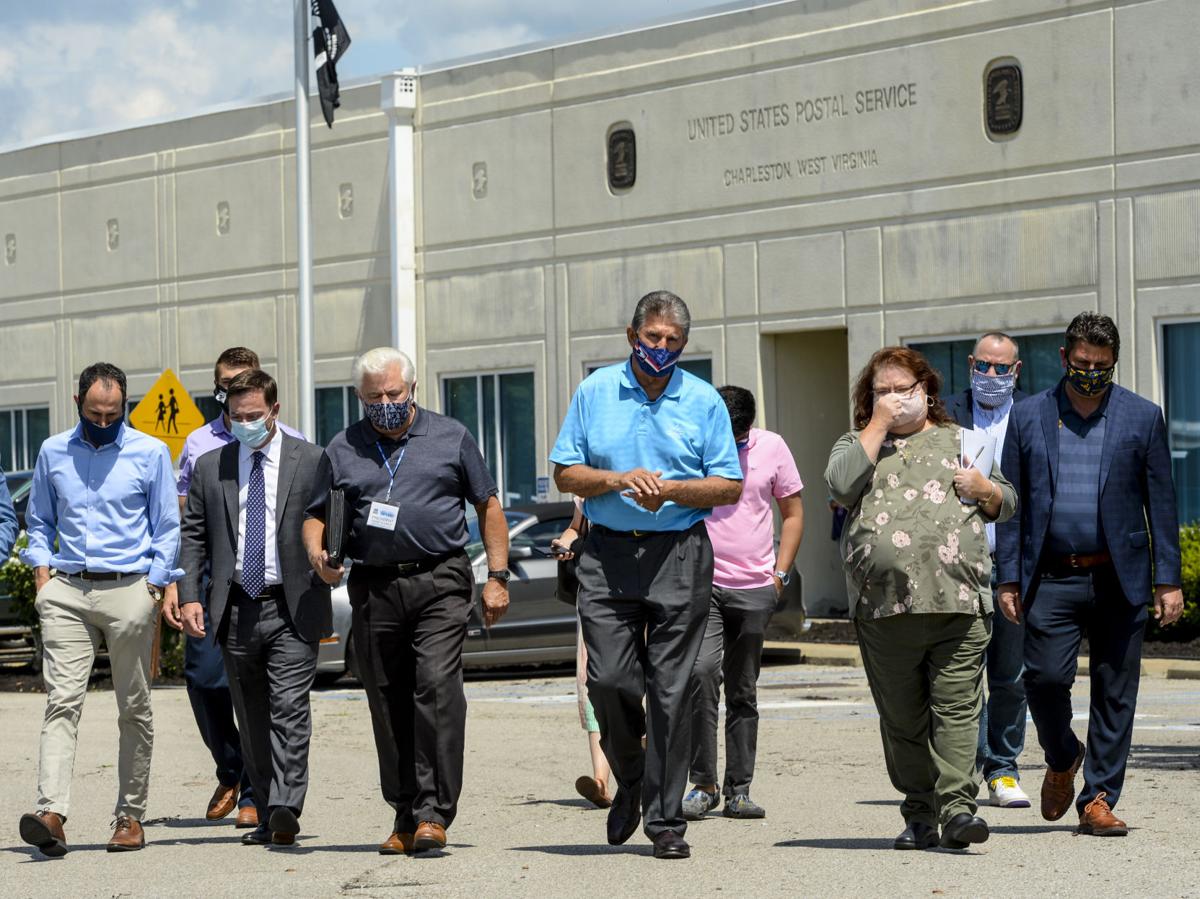 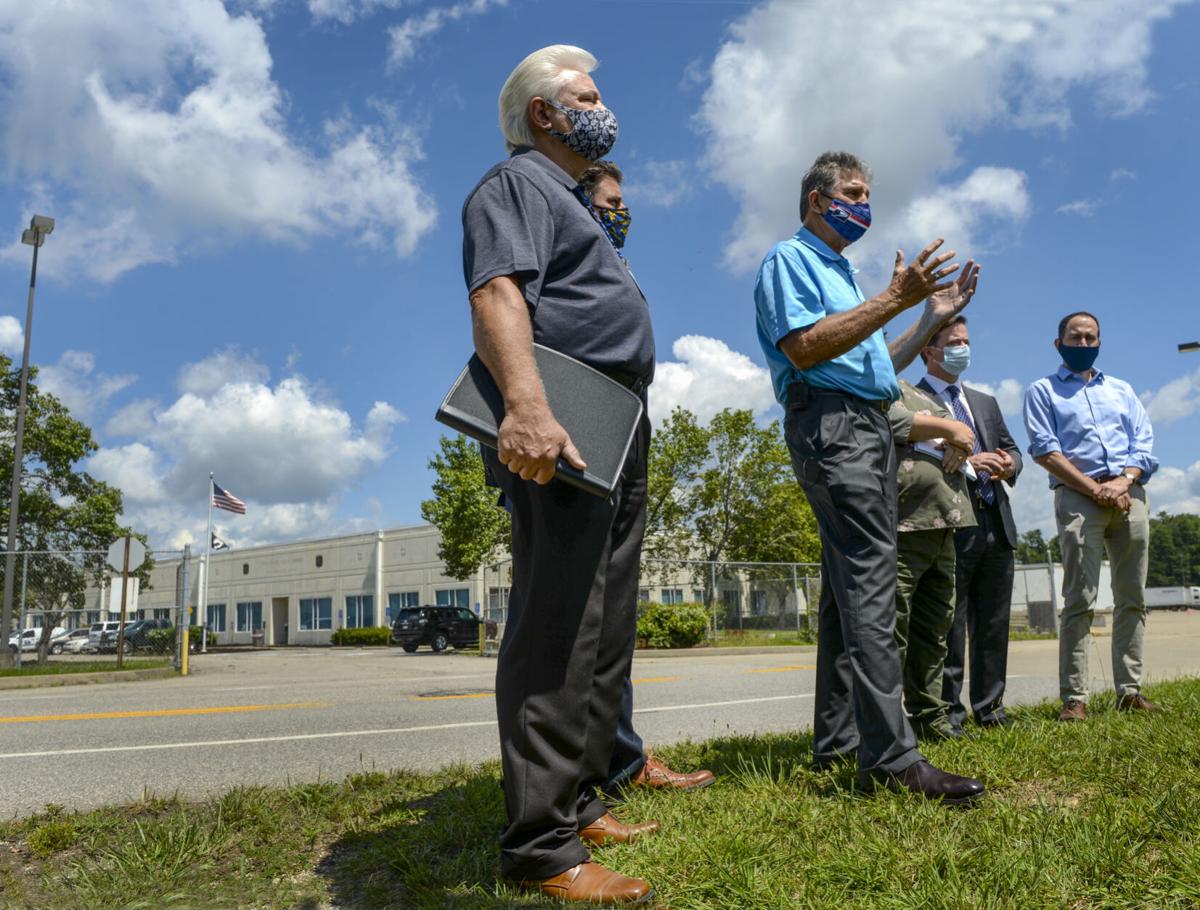 Sen. Joe Manchin, D-W.Va., toured the U.S. Postal Service’s Charleston Processing and Distribution Center, in South Charleston, on Monday to “thank employees for getting mail to West Virginians” during the COVID-19 pandemic, according to a news release issued before the visit.

But as he prepared to enter the facility, accompanied by a pair of postal union representatives and three Kanawha County elected officials, Manchin said he also would be trying to find out why three bar code-reading sorting machines reportedly were ordered removed from service there recently.

Monday’s visit to the Charleston Processing and Distribution Center followed a tour of postal facilities in Clarksburg, Fairmont, Morgantown and Sutton last Friday, in response to what Manchin termed “an all-out war on the U.S. Postal Service” by the Trump administration.

Manchin said Louis DeJoy, President Donald Trump’s postmaster general, had notices sent to 21 West Virginia post offices late last month, informing 10 that they were scheduled for closure — three by the end of August — while the remaining 11 offices would have their hours of operation cut.

“Then we learned the Postal Service was considering changing their longstanding practice of treating all election mail as first-class mail, which could result in slower delivery times and increase risks that voters would not receive and return ballots in time for the election,” Manchin said.

“Now, we’re hearing reports that the post office is removing sorting machines and reducing capacity a few months before an election where we’ll see more mail-in ballots than ever before,” he said. “This is unacceptable.”

Manchin said any slowdowns in mail delivery stemming from changes in policy or instances of equipment being taken offline were the result of actions taken by postal officials in Washington, not at the district level.

“I’ve never seen callousness on this scale before,” Manchin said. “Here we are in the middle of pandemic, with 80% of our veterans relying on the Postal Service to deliver their medications, and most of our Social Security recipients relying on it to deliver their checks. And now, the president is putting together a scenario to use the Postal Service as a scapegoat if he loses the election.”

On Aug. 4, Manchin and Sen. Gary Peters, D-Mich., introduced the Protect Our Services Today Act, which would bar the closure of any U.S. Postal Service facility built prior to January while the coronavirus outbreak remains at pandemic scale.

Manchin said he received assurances from DeJoy late last month that no West Virginia post offices were in imminent danger of closure. However, 10 post offices in the state remain on a review list for possible closure, which could take place only after additional study and public hearings, and others remain under consideration for possible curtailments in operating hours.

“Why close or cut back any of them?” Manchin asked.

He cited an April Pew Research Study indicating that 91% of the American public has a favorable view of the U.S. Postal Service.

“If more than 90% of the country approves of it, why not leave it alone?” he said.

Kanawha County Commissioner and Democratic Party gubernatorial candidate Ben Salango, among those touring the distribution center with Manchin on Monday, said he hoped the visit would provide answers “to one of the biggest questions I am hearing these days: Are the ballots going to be arriving in time to be counted?”

DeJoy’s motivations for cost-cutting policies on the eve of the election “are purely political,” said Delegate Doug Skaff, D-Kanawha, who also took part in the tour.

If enough pressure is brought to bear on DeJoy to focus on helping the Postal Service fulfill its mission, rather than pare its resources, Manchin said, “there’s still enough time to make sure we can get all the ballots in and counted on time.”

The Charleston Processing and Distribution Center, located in Southridge Center, processes mail for delivery to homes and businesses in all but the northern tier of counties in West Virginia, plus part of Eastern Kentucky.

Because of cost-cutting measures implemented since DeJoy became postmaster general in mid-June, “the mail is already being delayed,” said Paula Barker-Harless, president of the Charleston local of the American Postal Workers Union, among those touring the distribution center with Manchin.

According to Barker-Harless, the post offices in Marmet, Charleston Town Center mall and Station C in North Charleston are among those listed for closure or curtailment by the Postal Service.

“I don’t understand what the postmaster general is doing,” she said. “We’re handling more packages now, due to the coronavirus, than we were last Christmas. Instead of getting funds to help us deal with the pandemic, they want us to borrow money to get by. It seems like they’re coming after us.”