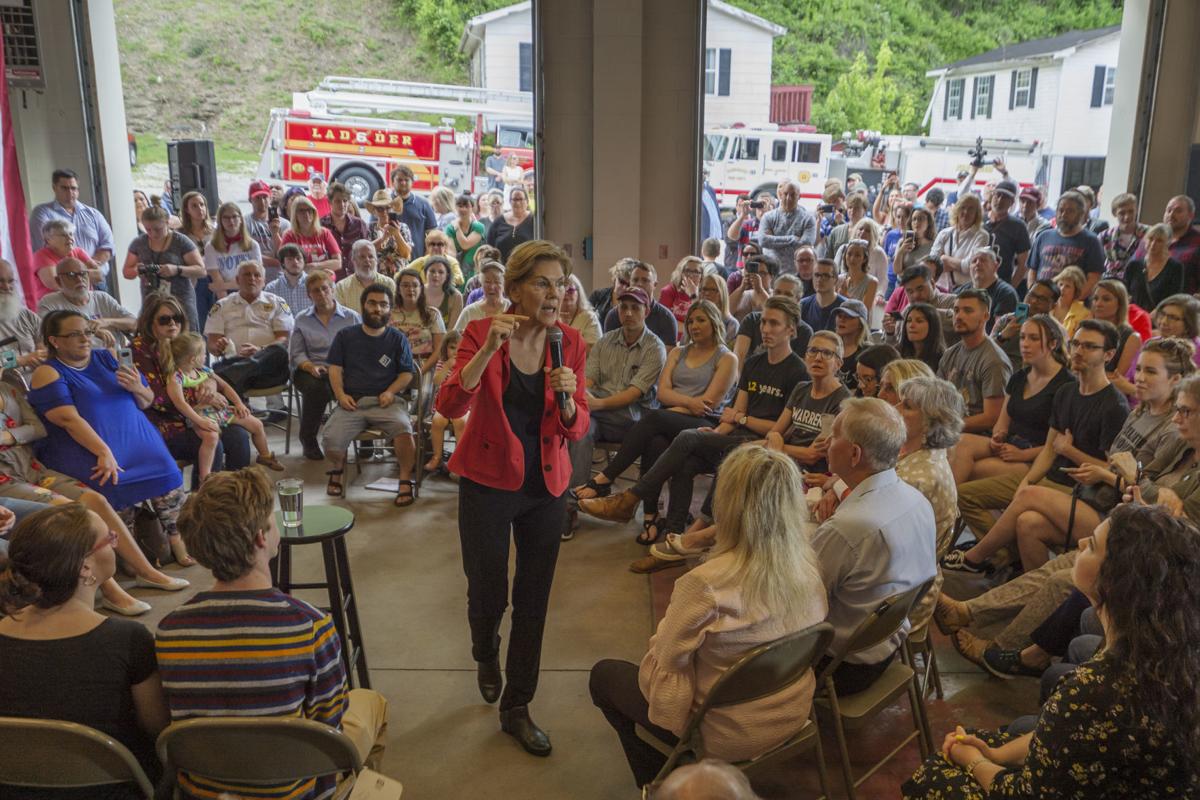 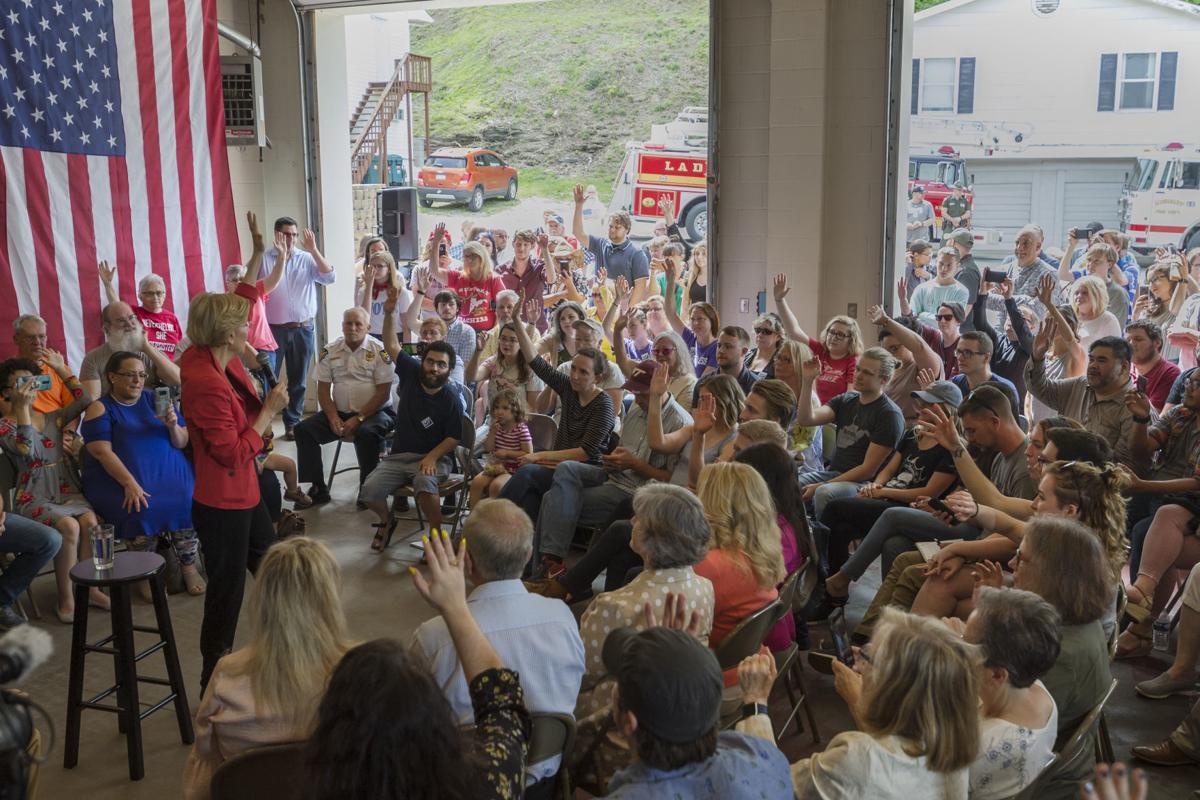 People raise their hands Friday after being asked by 2020 Democratic presidential candidate Sen. Elizabeth Warren, D-Mass., if they know someone affected by the opioid crisis during a “community conversation” event at the Kermit Fire & Rescue Headquarters Station. 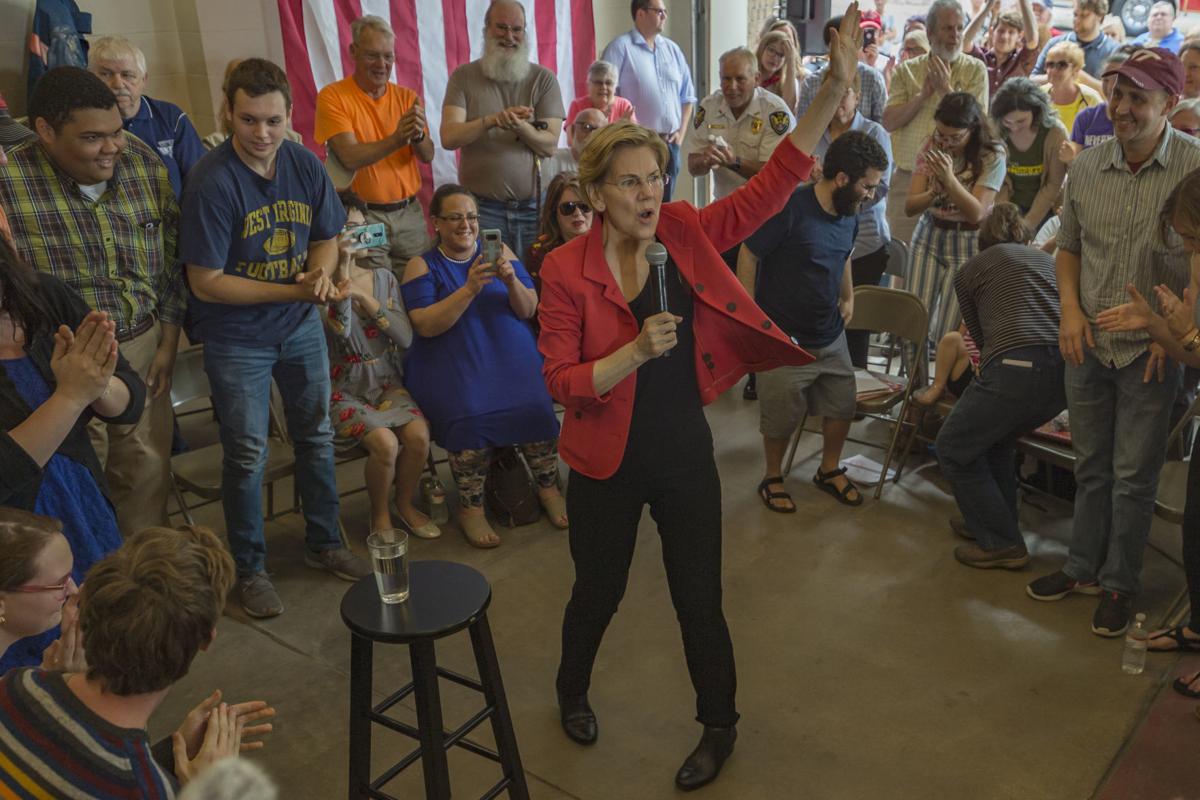 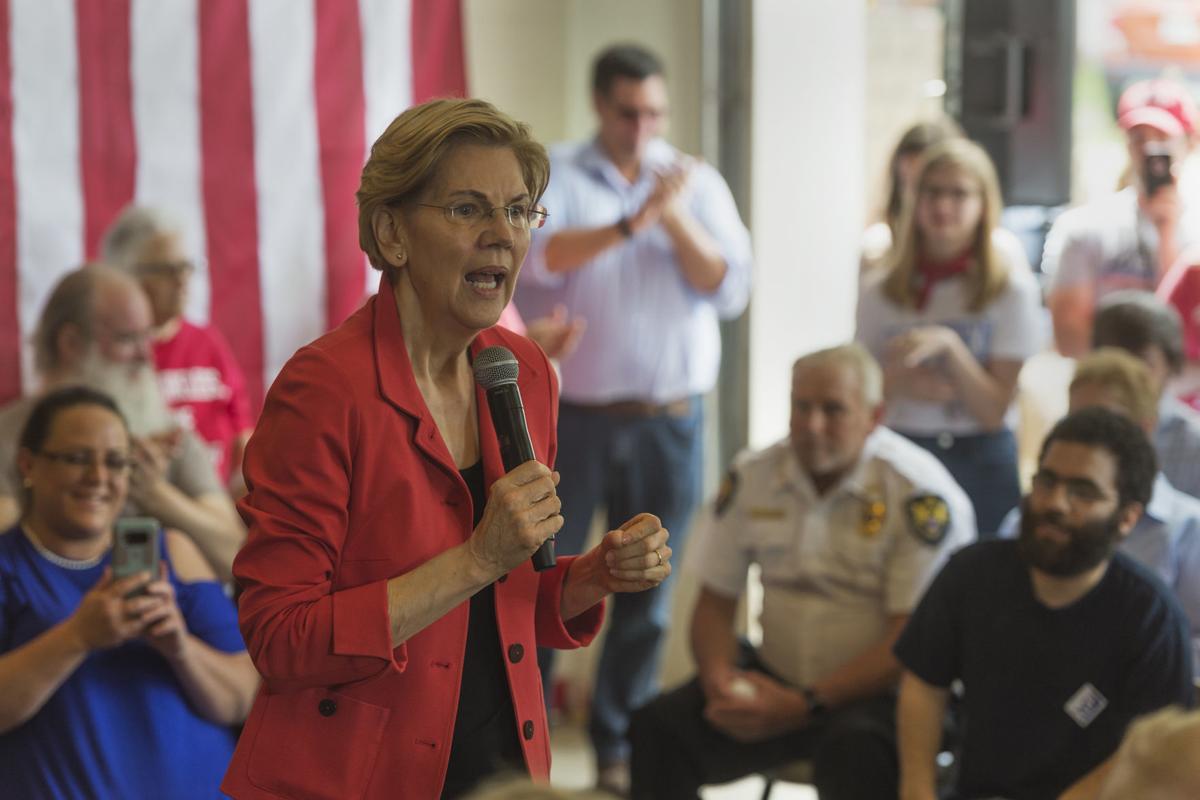 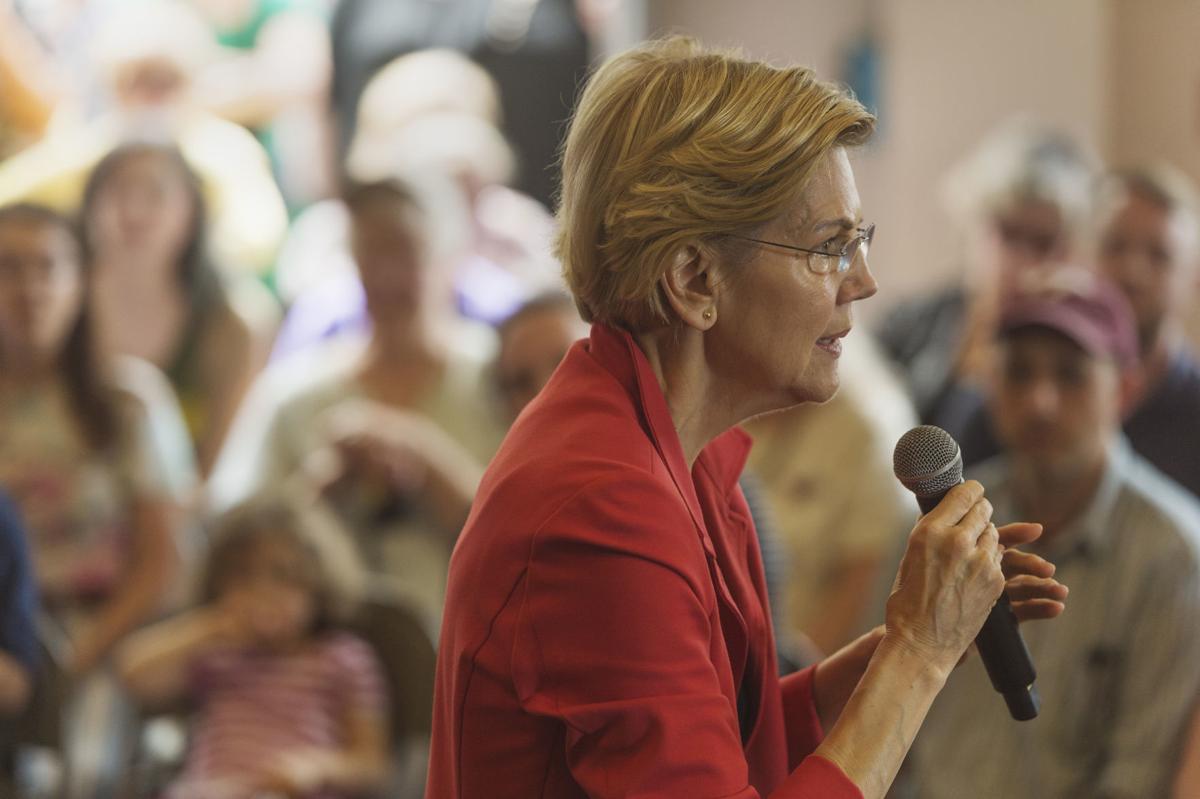 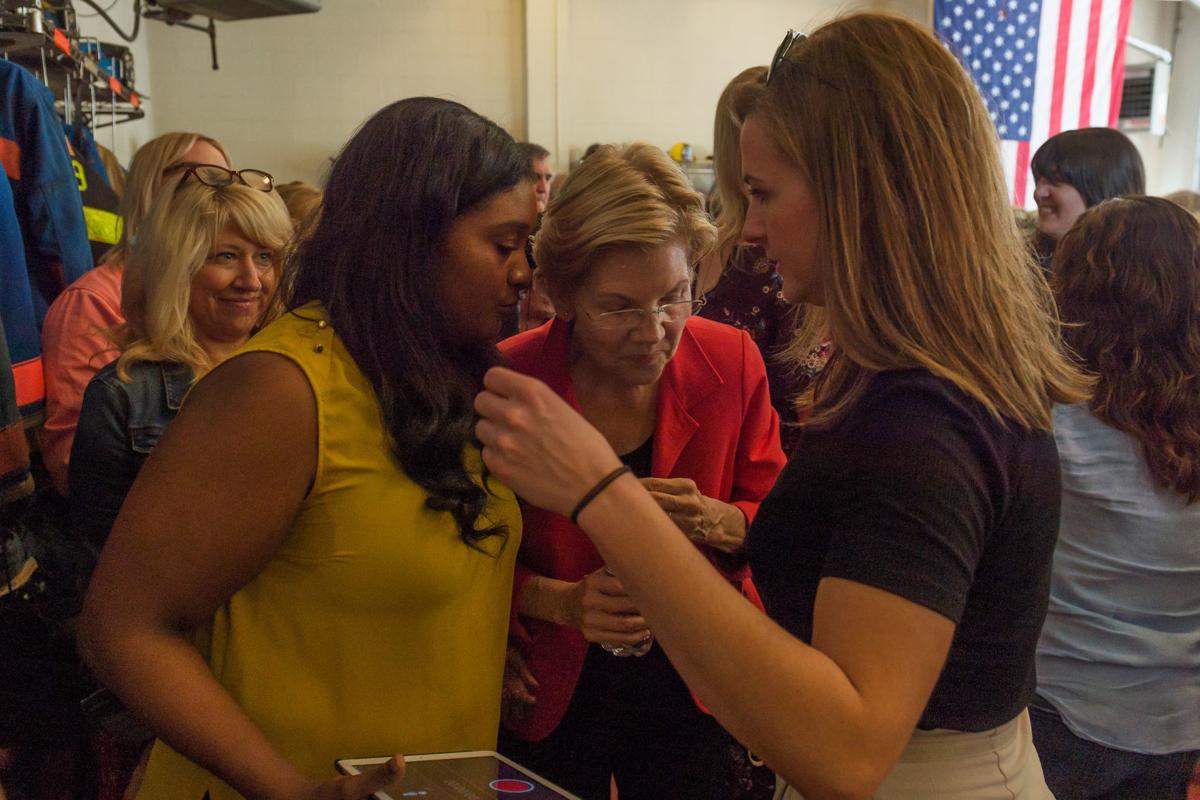 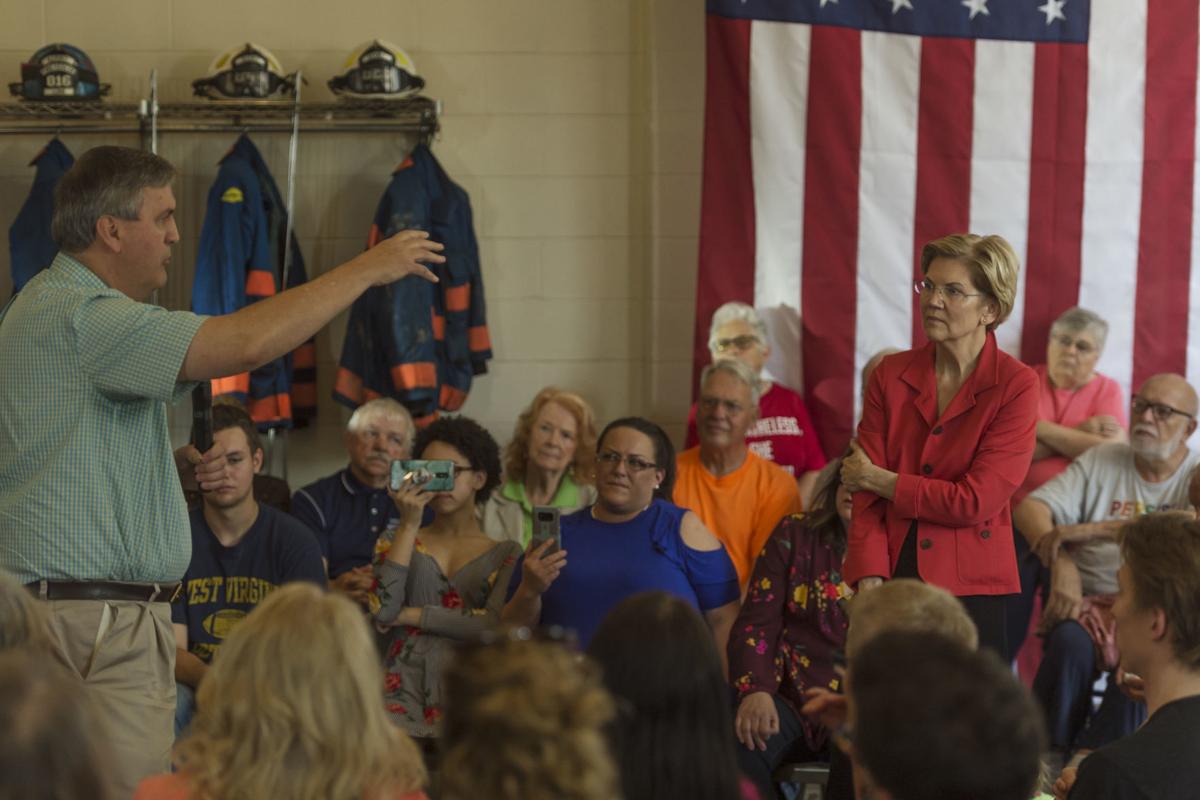 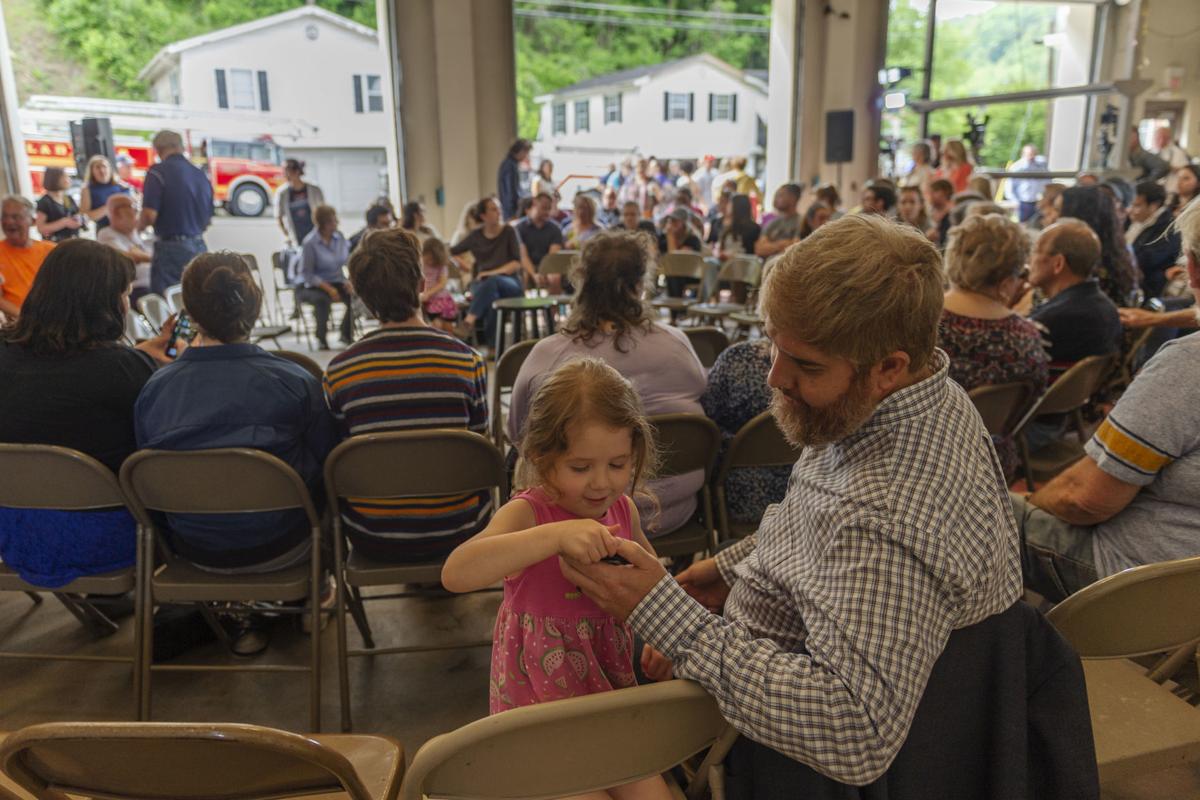 Ryan Frankenberry watches as his daughter Julia, 4, plays a game on a phone while waiting for 2020 Democratic presidential candidate Sen. Elizabeth Warren, D-Mass., to arrive for a “community conversation” event Friday at the Kermit Fire & Rescue Headquarters Station. 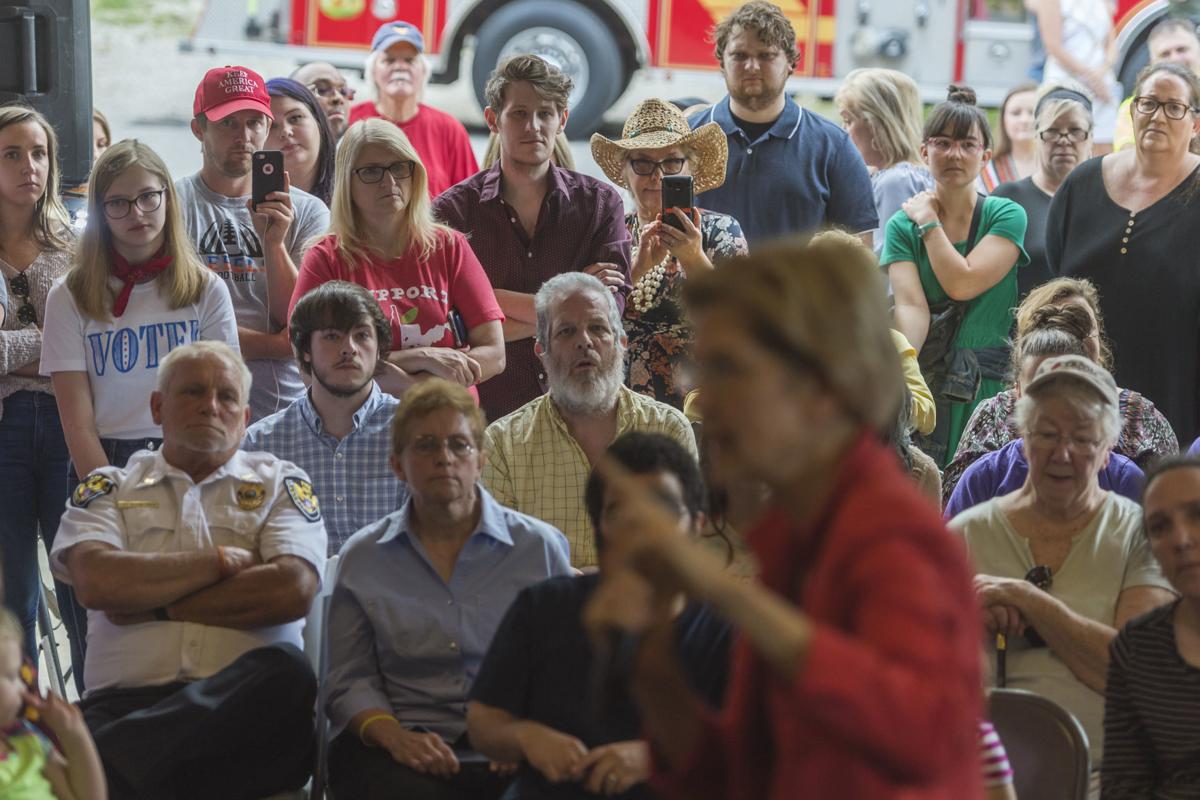 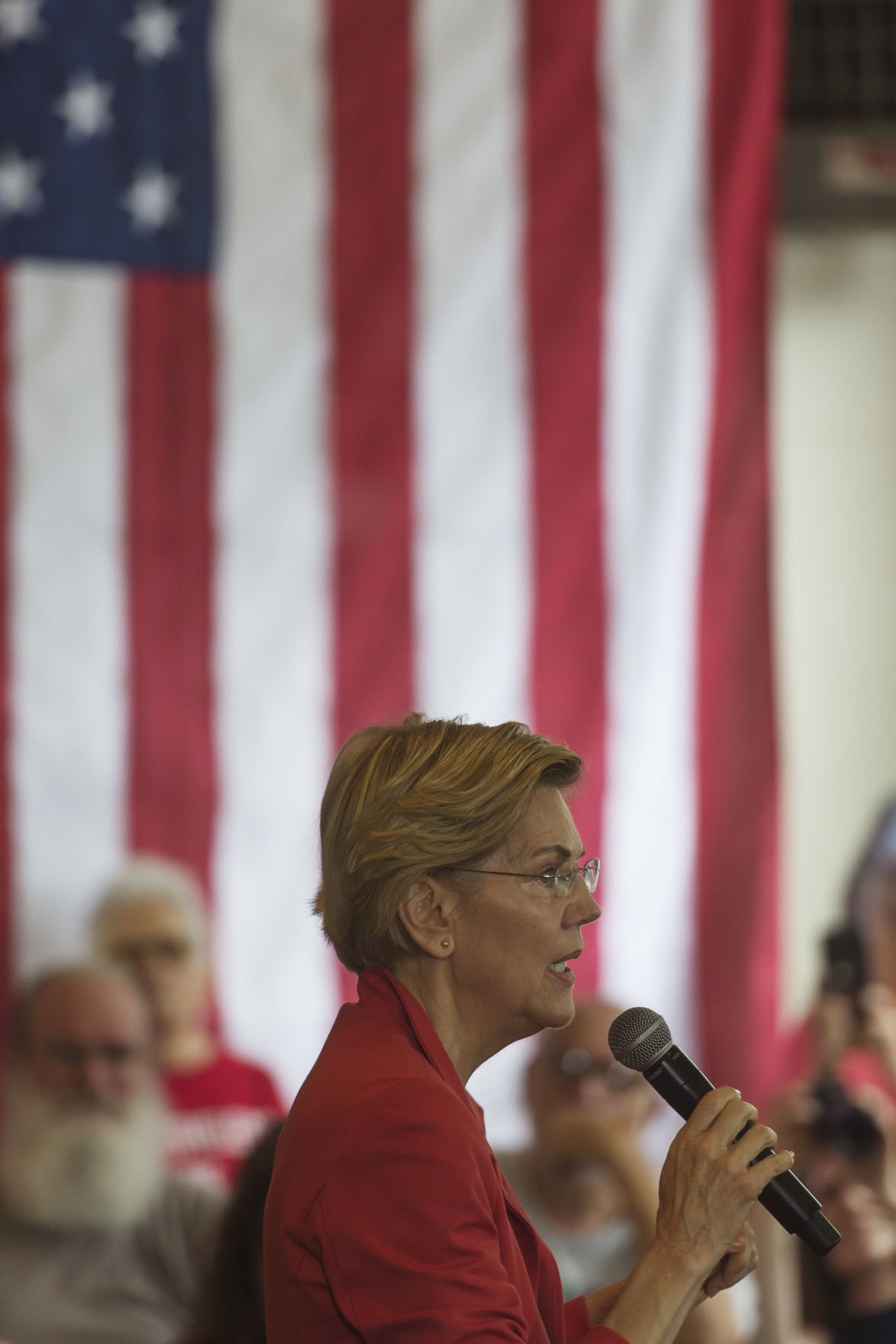 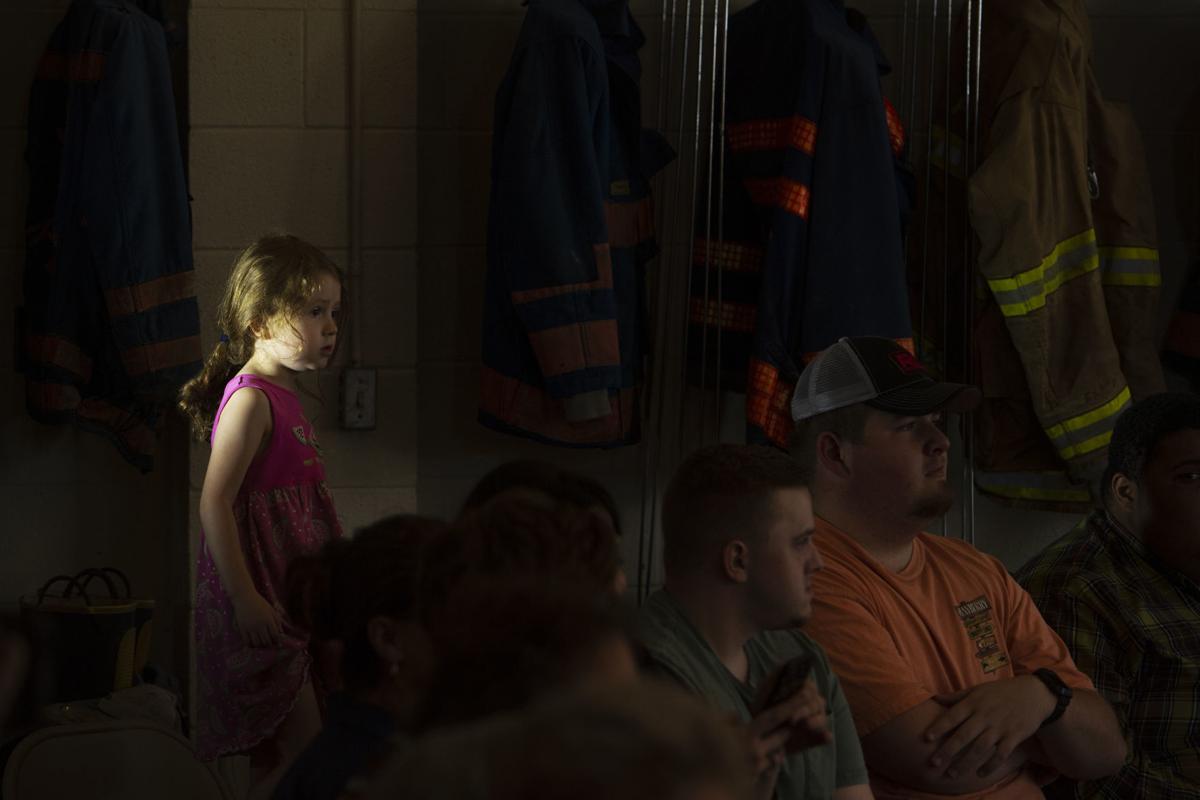 People raise their hands Friday after being asked by 2020 Democratic presidential candidate Sen. Elizabeth Warren, D-Mass., if they know someone affected by the opioid crisis during a “community conversation” event at the Kermit Fire & Rescue Headquarters Station.

Ryan Frankenberry watches as his daughter Julia, 4, plays a game on a phone while waiting for 2020 Democratic presidential candidate Sen. Elizabeth Warren, D-Mass., to arrive for a “community conversation” event Friday at the Kermit Fire & Rescue Headquarters Station.

KERMIT — Backdropped by a town that has come to epitomize the pill dumping that preceded an addiction crisis, the first of the 2020 Democratic presidential contenders visited West Virginia on Friday.

Massachusetts Sen. Elizabeth Warren addressed a full house at the Kermit Fire and Rescue Station, ostensibly to unveil a plan that would provide $100 billion in federal funding over 10 years to expand access to treatment and recovery service for people with substance abuse disorders.

At the firehouse, Warren riffed on some of the central pegs of her platform: student debt relief, corporate accountability, universal child care and others. To cover costs, she proposed an “ultramillionaire tax” — a 2 percent tax on every dollar earned after the first $50 million.

Under her plan, West Virginia would receive $50 million per year, she said, and municipalities would offer their own ideas on how to fix the damage sustained by places like Kermit.

“Here’s a town of 400 citizens that got nearly 13 million opioid pills pushed into this town,” she said. “That’s more than 30,000 pills per resident of this town. And what do the corporations do? They just kept making money. They just kept pushing it in.”

Among those listening was Dr. J.W. Endicott, a family practice physician who lives and works in Kermit. He said that, while the high-water mark of the prescription drug abuse wave has passed, users have since pivoted to heroin and synthetic offshoots.

As for who’s to blame, Endicott said, he saw the pill dumping himself.

“I saw this firsthand,” he said. “In 2007, over a 10-month period, there were 3 million prescriptions that came through our little Sav-Rite pharmacy there. That was 10,000 pills a day. We’re talking about who’s to blame; Big Pharma is to blame.”

Now, the state has huge needs when it comes to access to care. He said inpatient or outpatient drug treatments, and other resources to stymie the effects of “losing a generation” to opioid abuse are in dire need.

Kermit Volunteer Fire Chief Tommy “Tomahawk” Preece works on the front lines of the addiction epidemic, reviving overdose victims, sometimes in their own homes with children present. He said he and his crew respond to those calls in trucks and cars that were made as early as 1981. Some of this money, he said, could help stations like his buy some new equipment.

“We depend on these vehicles to get out to people and help them,” he said.

Although Warren came to talk about her opioid plan, many in the crowd indicated more interest in her focus on wealth and income inequality.

“I first heard her talking about economic inequality, so that was the first issue that really drew me to her,” she said. “Then I was extremely drawn into her practicality. She talks about plans, she’s very organized, she lays out an issue and she tells you how she’s going to manifest that issue later, how she’s going to make it happen.”

Manuel Ojeda was out in the crowd, as well. The uncle of former state senator and one-time congressional candidate — and early 2020 presidential candidate, until dropping out — Richard Ojeda, he knows well the political clout President Donald Trump wields in the region and how tough things could be for Warren. That said, the gap between the wealthy and poor continues to widen, Ojeda said, and eventually something’s got to give.

“In the area I live in, you’ve got some people that are trying to work minimum-wage jobs, and you just simply can’t keep a car on the road, maintain a home and put groceries on the table with a minimum-wage job,” he said. “Things have to change in this country.”

Warren’s proposed tax apparently would be felt by few, if any, West Virginians. Internal Revenue Service data from 2013 shows just over 600 of the richest 480,000 Americans live in West Virginia. Meanwhile, an estimated 979 residents died of drug overdoses in 2018, a higher rate than any other state, according to data from the Centers for Disease Control and Prevention.

Even so, some are skeptical about whether Warren’s policies could sway voters in a county where Trump carried 83 percent of the vote in 2016.

The political realities of Warren in Mingo County — which hasn’t backed a Democrat for president since John Kerry in 2004 — weren’t lost on Charles Saul. He said he’s not affiliated with any party, although he said he was a Republican until about seven years ago. Although the U.S. economy is strong, he said, he wants to “explore some options” besides Trump, who he said is hurting America’s image with his abrasive style.

While he doubts Warren would win Mingo, Saul wanted to see what kind of reception she’d get from a place that’s “probably not her base.”

Undeterred by working a deep-red state, or by a GOP-affiliated counter-rally taking place down the street, Warren kept at it. She’s tired, she said, of the “freeloading billionaires,” and it’s time for the government to refocus around the people, not the corporations.