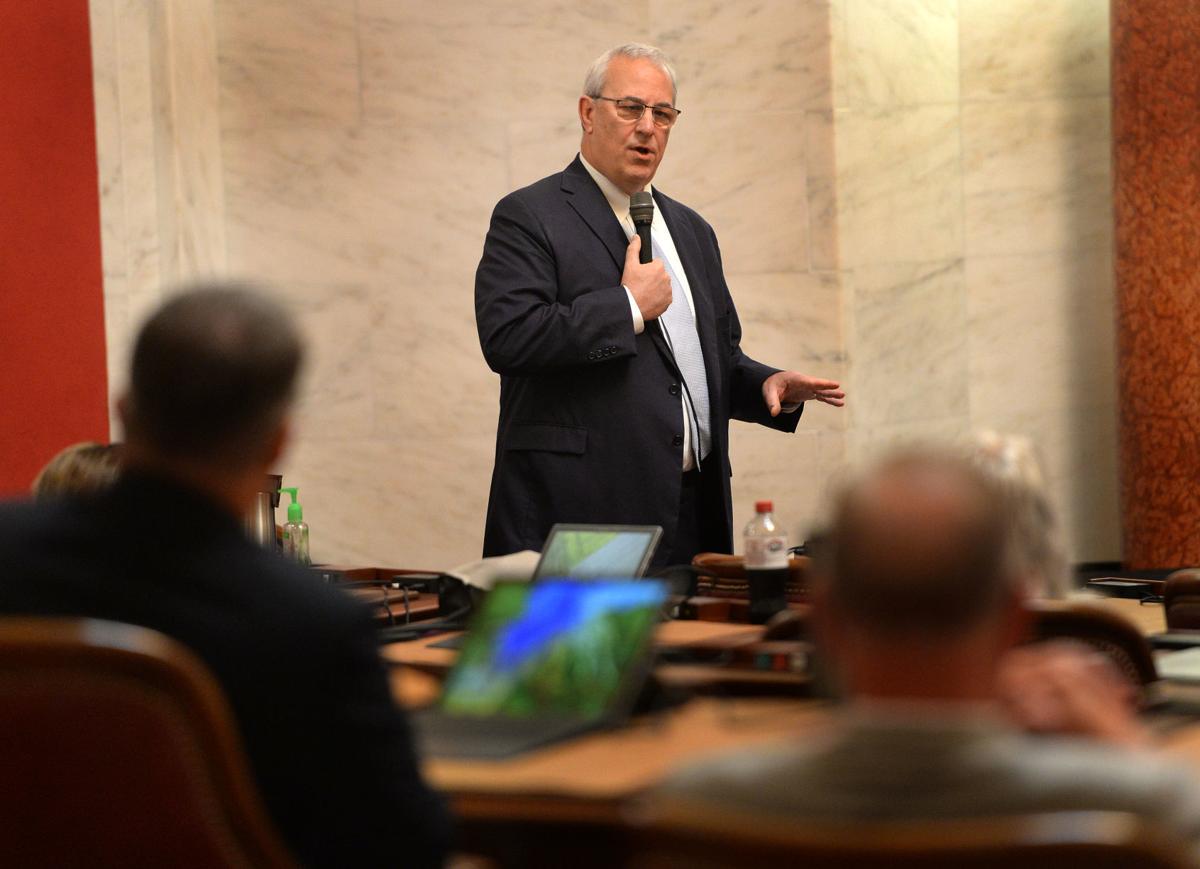 Sen. Charles Trump, R-Morgan, speaks on the floor of the Senate during Monday’s debate about the impeachment trial of Supreme Court Chief Justice Margaret Workman. 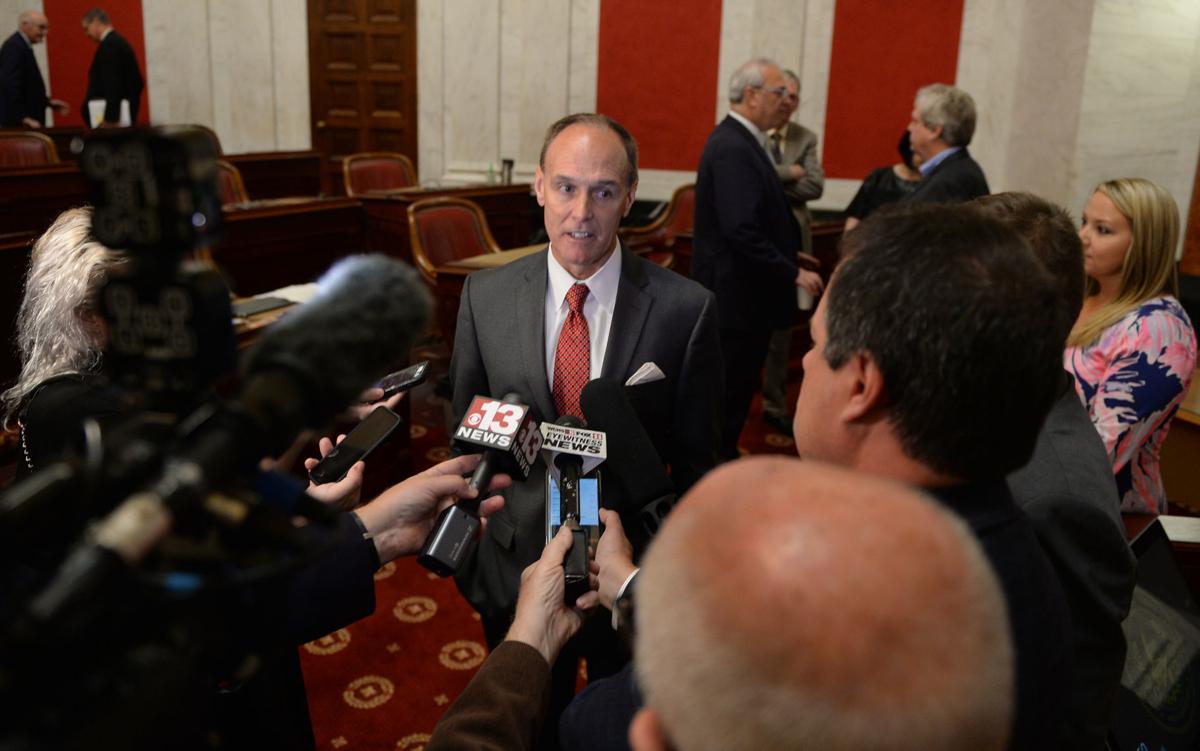 Senate President Mitch Carmichael, R-Jackson, talks to reporters after the Senate adjourned for the day.

Sen. Charles Trump, R-Morgan, speaks on the floor of the Senate during Monday’s debate about the impeachment trial of Supreme Court Chief Justice Margaret Workman.

Senate President Mitch Carmichael, R-Jackson, talks to reporters after the Senate adjourned for the day.

Blocked by a state Supreme Court writ of prohibition from moving forward with the scheduled start of Chief Justice Margaret Workman’s impeachment trial Monday morning, senators instead spent more than 90 minutes debating how, and whether, to proceed.

Although the Senate floor session adjourned without a formal decision, Senate President Mitch Carmichael, R-Jackson, said afterward the Senate will appeal the court order in hopes of being able to proceed with remaining trials against Workman and other impeached justices.

“We’ll be filing a petition for reconsideration with the West Virginia Supreme Court,” he said Monday.

“We believe this is a far-ranging decision that has implications beyond the current issues before us, but to the future interaction of the branches of government, and our ability to hold people accountable,” he added.

Senate Judiciary Chairman Charles Trump, R-Morgan, one of five lawyers in the Senate, told the Senate he believes there could be grounds to appeal the court’s finding that the House of Delegates’ articles of impeachment were fatally flawed because the House had failed to follow proper procedures, including failing to ever vote on the House’s impeachment resolution.

However, he conceded, “Let’s be honest. We’re in uncharted territory here.”

The court issued the writ of prohibition Thursday afternoon, blocking Workman’s trial — and most likely by precedence, pending trials for retired justice Robin Davis and suspended Justice Allen Loughry — from proceeding in the Senate.

With the sitting justices either disqualified or not participating, the 5-0 decision by acting justices was written by acting Chief Justice James A. Matish, a Harrison circuit judge.

Trump said that because the Senate was the respondent in the writ for prohibition, Senate attorneys were not in a position to address whether the House had violated its own procedures in advancing articles of impeachment against justices Workman, Beth Walker, Loughry and Davis.

Trump said the House should be invited to intervene in the motion for appeal, noting, “The question of whether the procedures followed by the House of Delegates were improper or not is woven into all the cases.”

Trump stressed that the Senate is facing a crucial moment in state history.

During the lengthy floor debate that followed, opinions ranged from accepting the court’s order, concluding that attempting to overturn it to pursue impeachment charges would be costly and futile, to demanding that Workman’s trial proceed immediately.

“To what ends do we move forward?” asked Sen. Mike Romano, D-Harrison, who also is a lawyer.

He said the only count remaining against Workman is the catch-all maladministration charge, a charge that the Senate acquitted Walker of during her impeachment trial earlier in the month.

Trump had previously said he does not believe the Senate has a basis to appeal the court’s ruling throwing out impeachment charges for overpayment of senior status judges. The ruling concluded that a law setting caps on those payments was an unconstitutional infringement on the Supreme Court’s authority to administer its own budget.

“We’re fooling with our democracy. We can’t come up with reasons or violations of law that don’t exist,” Romano said, arguing against appealing the court order.

“The Legislature does not have an absolute right to impeach and remove,” he said, adding that it would be unconstitutional to impeach individuals based on race, gender or political affiliation.

However, Sen. Robert Karnes, R-Upshur, took the other extreme, declaring that the Senate should have its sergeant-at-arms physically bring Cabell Circuit Judge Paul Farrell to the chambers and force him to preside over Workman’s trial as acting justice. Farrell announced Thursday that he could not continue to preside under the writ of prohibition, and did not appear in the Senate on Monday.

While Farrell did not attend Monday’s floor session, he did issue an order granting a continuance for Davis’ Senate trial after two of her attorneys withdrew for health reasons. Prior to the writ of prohibition, Davis’ trial was scheduled to begin on Oct. 29.

“There is no confidence in this court because the justices destroyed that confidence,” said Karnes, who was defeated in the May primary election. “Impeachment is about restoring confidence in public office.”

Senate Majority Leader Craig Blair, R-Berkeley, said he was confident the Senate could give all justices impartial trials, even though he said they’ve already been convicted in the court of public opinion.

Romano, however, argued that the Senate should follow the rule of law, not mob rule.

“To allow a mob to scream, ‘We need to have a head in the courthouse square’ shows we have no courage. We have no principles,” he said.

Sen. Richard Ojeda, D-Logan, questioned why senators who are now adamant about challenging the writ of prohibition in order to pursue the impeachment trials were not so enthusiastic back in February, dismissing as partisan politics calls that he and House Democrats made for impeaching Loughry.

“It bothers me that now everybody’s fed up, when they should have been fed up in February,” said Ojeda, who is running for Congress.

Sen. Ryan Weld, R-Brooke, argued that if the writ of prohibition is allowed to stand, future Legislatures would effectively need permission from the Supreme Court to pursue any impeachment charges.

He also questioned how the House could violate its procedures for impeachment, given little precedent for the proceedings.

“There was no dusty binder in an office that said, ‘Impeachment Rules,’ ” he said.

Carmichael said Senate leadership is well aware that they are under a deadline, since any pending impeachment charges will expire when the 83rd Legislature ends in about seven weeks, and aware of potential costs for pursuing an appeal of the court order.

“What we do today will be used as precedence in the future, so we want to do it right,” he said.

Also Monday, the court’s Office of Disciplinary Counsel announced that the Supreme Court had annulled the law licenses of five individuals, including former justice Menis Ketchum, who pleaded guilty in federal court in August to one count of wire fraud for using a state credit card for personal benefit during a golf outing to Virginia. Ketchum resigned from the court on July 27.