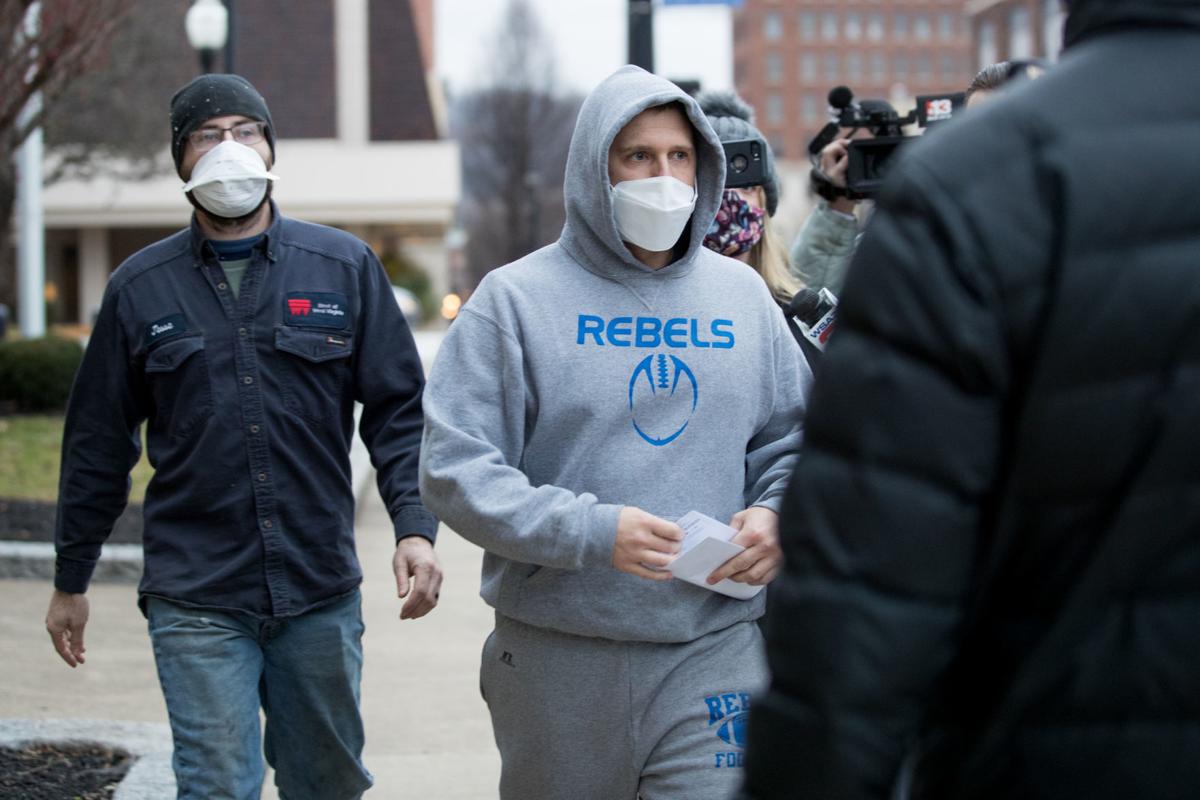 Delegate Derrick Evans, R-Wayne, exits the Sidney L. Christie U.S. Courthouse and Federal Building after being arraigned on federal charges Friday in Huntington. Evans was arrested and charged after breaching the U.S. Capitol during a deadly riot on Wednesday. 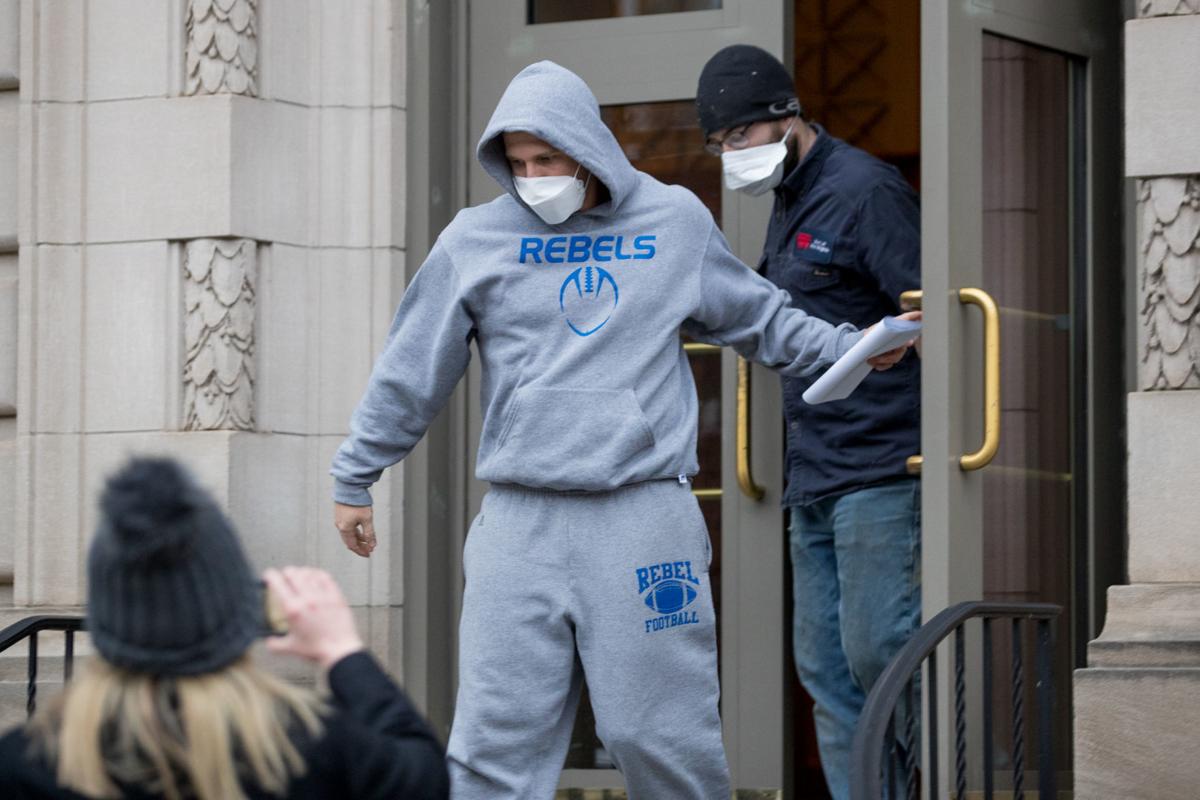 Derrick Evans exits the Sidney L. Christie U.S. Courthouse and Federal Building after being arraigned on federal charges Friday, in Huntington. Evans, a Republican from Wayne County, resigned from the House of Delegates on Saturday.

Delegate Derrick Evans, R-Wayne, exits the Sidney L. Christie U.S. Courthouse and Federal Building after being arraigned on federal charges Friday in Huntington. Evans was arrested and charged after breaching the U.S. Capitol during a deadly riot on Wednesday.

Derrick Evans exits the Sidney L. Christie U.S. Courthouse and Federal Building after being arraigned on federal charges Friday, in Huntington. Evans, a Republican from Wayne County, resigned from the House of Delegates on Saturday.

Delegate Derrick Evans, R-Wayne, was arraigned Friday on federal charges for his role in an insurrection at the U.S. Capitol earlier this week.

Evans, whose full name is Jonathan Derrick Evans, was arraigned at the federal courthouse in Huntington and released on his own recognizance.

The 35-year-old is charged with two misdemeanors — entering a restricted area and violent entry or disorderly conduct. He could face up to 18 months in federal prison and a fine as a result.

While Evans was being arraigned, his new colleagues in the West Virginia House of Delegates were considering a means by which he could be removed from office and Republican Gov. Jim Justice called Evans’ actions “a scar on West Virginia.”

On Jan. 6, Evans was part of a group of supporters of President Donald Trump who made their way past barricades and forced entry into the U.S. Capitol that forced Congress to temporarily stop its work in certifying election results until law enforcement cleared the rioters from the facility.

Evans livestreamed himself as part of a crowd of people pushing forward into the Capitol, eventually screaming “Derrick Evans is in the Capitol!”

Evans later deleted the video from his personal “Derrick Evans — The Activist” Facebook page, but the footage has been widely shared since then.

The affidavit filed by an investigating FBI agent references the video, as well as previous Facebook posts in which Evans referenced “taking back America,” “Stop the steal” and “storm coming.” Evans also posted a picture of a charter bus full of maskless people, which he said was headed to D.C.

In a tweet he posted on Jan. 2, Evans said he was going to Washington, D.C., on Jan. 6 “Because this is the 1st time @realDonaldTrump has asked me to do anything.”

The agent said that, while Evans claimed he was there as part of the media, he believes nothing on Evans’ social media pages indicates he was acting in such capacity.

The federal government has 30 days to indict Evans, but it did not seek to detain him Friday. Evans was released on a personal recognizance bond, which means he did not have to post money for bail.

As a condition of his bond, he must continue with his employment and must cease all contact with anyone who could be a witness in the case. He must turn over any firearms he possesses and also must refrain from using drugs or alcohol during the case. However, his travel within the United States was not restricted. If Evans violates any of the conditions of his bond, a judge can order him to jail to await trial.

If indicted, Evans will have to report to a federal court in the District of Columbia.

Charges against Evans were announced Friday by acting U.S. Attorney Michael Sherwin at a news conference announcing charges against people who forced entry into the Capitol on Wednesday.

Gov. Justice relayed the announcement of the charges during his tri-weekly news conference Friday. Earlier in the conference, Justice said he didn’t know all of “the particulars” of the situation.

“I think it’s terrible,” the governor said. “I think it’s a scar on West Virginia. I think, you know, he can come up with any excuse in the world. But being there and rushing and entering the Capitol of the United States of America — I mean — how in the world could we possibly think that’s anything but bad stuff?”

Justice, who often talks about his friendship with, and support for, President Trump, said he wished there had been more time to vet the results of the Nov. 3 election, but he has faith in the people who “were checking things out nonstop in regard to the elections.”

“When you get to the end of the time situation, then we have got to fall back and be America again,” Justice said.

Evans was elected to his first term in the House of Delegates during the same election in which Trump alleged there was widespread fraud that led to his failed reelection bid.

Trump never presented any evidence or other possible proof that the fraud occurred, and dozens of state and federal courts and Republican officials have rejected Trump’s claims.

West Virginia lawmakers have called for Evans to resign from the Legislature or, if he refused, for House members and Speaker Roger Hanshaw, R-Clay, to take action to remove Evans from office.

On Thursday, Evans’ attorney, John Bryan, released a statement saying Evans is not guilty of any crime and did not participate in any violent activity or property theft or damage. Bryan also said Evans has no intention of resigning from office.

On Friday, House Minority Counsel Joe Altizer said attorneys in the Legislature had identified at least two means by which the House could prevent Evans from participating in actual lawmaking.

The first way would be to invoke Rule 30 in the Rules of the House of Delegates. In that rule, any member who is found to have engaged in “disorderly conduct” can be removed from the chamber if two-thirds of the members of the House vote in favor of it. The rule does not say whether the conduct has to have occurred in the House chamber for a member to be expelled from the chamber.

House members also have the means to object to the seating of any of their colleagues if they believe there is a reason they should be disqualified from serving, Altizer said.

Something that might earn that disqualification would be a delegate who is elected but isn’t old enough to serve in office.

In the case of Evans, who was sworn into office Dec. 1, it could be a matter of him violating the oath of office.

Regardless of the reason, it takes only a simple majority of the House to disqualify another member from being seated.

“The oath requires him to uphold the United States and state Constitutions,” Altizer said. “After taking the oath, he went to D.C. We see that evidence on his Facebook posts would show he was part of an effort to disrupt the process at the U.S. Capitol for certifying the election of the president. That’s clearly an unconstitutional act on his behalf and certainly could be considered by the membership as a reason to disqualify him for eligibility to be seated.”

If it is the will of House members to challenge Evans’ eligibility to be seated, they will have to do so when the West Virginia Legislature certifies the state’s election results when it convenes for an organizational day on Jan. 13.

The 60-day regular legislative session is scheduled to begin Feb. 10.