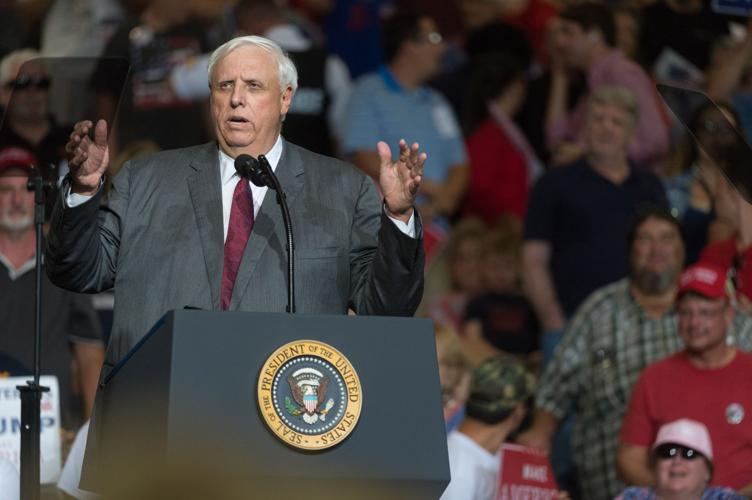 Gov. Jim Justice speaks during President Donald Trump’s political rally inside the Big Sandy Superstore Arena in Huntington on Thursday. Justice announced he was switching his party affiliation from Democrat to Republican. 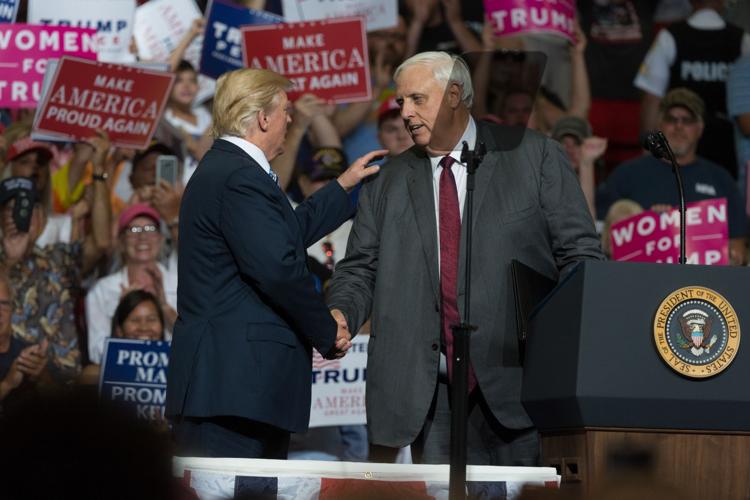 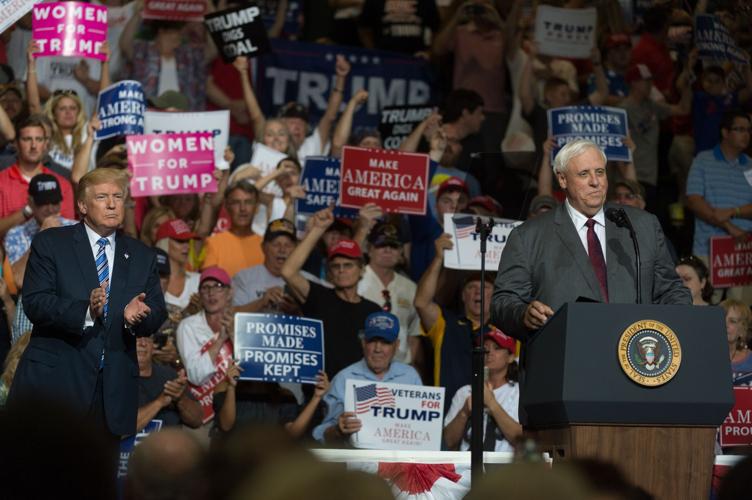 Gov. Jim Justice speaks during President Donald Trump’s political rally inside the Big Sandy Superstore Arena in Huntington on Thursday. Justice announced he was switching his party affiliation from Democrat to Republican.

West Virginia Gov. Jim Justice announced Thursday night that he is switching political parties, changing from a Democrat to a Republican — a move that apparently caught almost everyone in his administration and West Virginia politics by surprise.

Justice made the announcement at President Donald Trump’s rally in Huntington. The president invited Justice onto the stage about midway through his speech.

Justice spoke about the difficult special session and his displeasure with the budget that came out of it.

“Today, I will tell you, with lots of prayers and lots of thinking ... I can’t help you anymore being a Democrat governor,” Justice said. “So tomorrow, I will be changing my registration to Republican.”

Justice, a coal and real estate magnate, ran for governor last year as a Democrat.

During the election, Justice frequently trumpeted his friendship with Trump and his family.

Before he ran as a Democrat, Justice had been a registered Republican and also a political independent. Still, many of West Virginia’s Democratic leaders embraced his run. Sen. Joe Manchin, West Virginia’s sole Democrat in Congress, endorsed Justice more than a month before the Democratic primary.

“There are three extremely capable candidates in the Democratic race for governor, but I believe that Jim Justice is uniquely qualified to handle the major challenges that West Virginia is facing,” Manchin said at the time.

Manchin issued a statement Thursday, minutes after Justice confirmed he is switching parties.

“I have been and always will be a proud West Virginia Democrat. I am disappointed by Governor Justice’s decision to switch parties,” he said. “While I do not agree with his decision, I have always said that I will work with anyone, no matter their political affiliation, to do what is best for the people of West Virginia.”

For decades, West Virginia was one of the most reliably Democratic states in the nation, but residents have voted for Republicans for president each year since 2000. Since then, four of the state’s five seats in Congress have flipped from Democrat to Republican.

Justice’s chief of staff, Nick Casey, is a former state Democratic Party chairman, as is Larry Puccio, who ran Justice’s campaign for governor.

Casey said Thursday afternoon he didn’t know anything about Justice’s party switch. Told that the Times had reported it, he said, “I thought they were fake news?”

“I have no idea what you’re talking about,” Casey said while he was in an elevator at the Capitol Complex, leaving a meeting of the state School Building Authority, which he chairs.

Butch Antolini, Justice’s communications director, would not comment on a gubernatorial party switch before the Trump event in Huntington.

A source close to the Justice administration said staffers were caught by surprise.

“They began to hear rumblings Tuesday but really didn’t have a clue what was happening or going on,” the source said. “When this first broke, I texted a couple of them, and they said, ‘You know as much as we do. We’re in the dark.’ ”

Goodwin, Justice’s Democratic primary opponent, said on Facebook, “Jim Justice switching parties is totally unsurprising. I am surprised it took him this long to switch back. He’s always done only what he thinks is best for him — to heck with everybody else. It’s why I could not endorse him. This should be a huge wakeup call for the current leadership of the West Virginia Democratic Party. Character and integrity matter.”

“Jim Justice said he became a Democrat because Democrats care about people. I think we can all guess just who he cares about by his decision today and it’s not the people of West Virginia,” Biafore said in a statement. “During his campaign for governor, Jim Justice said he would never lie to the public; he said he would never be a politician, and he would definitely be a full-time governor. None of those promises were kept.

“Jim Justice took advantage of Democrats by taking our money and our votes. It’s a slap in the face to all of us who believed in what he was promising. I never thought I would see Jim Justice be anyone’s puppet. Shame on him.”

Rep. Evan Jenkins, who switched from Democrat to Republican before his successful run for Congress in 2014, said outside Trump’s Huntington event Thursday that he will welcome Justice to the Grand Old Party.

“We have had scores of people who have changed their party registration from Democrat to Republican,” Jenkins said. “If Jim Justice is the next one to do it, I welcome him to the Republican Party. I changed parties because I couldn’t be part of a liberal agenda that was so contrary to who we are and what we believe in West Virginia.”

West Virginia Attorney General Patrick Morrisey said he looks forward to working with Justice “to advance economic opportunity and to advance conservative principles.” Morrisey and Jenkins are running for the Senate seat currently held by Manchin.

Rep. Alex Mooney, R-W.Va., also said he’ll welcome Justice to the GOP, although he wanted to wait until an official announcement before commenting further.

“This is why politics is so interesting. You never know what’s going to happen,” Mooney said. “I want to hear what he has to say. The state is obviously more Republican these days, so it would be more reflective of the voters.”

Sen. Shelley Moore Capito, who flew to Huntington on Air Force One with Trump and attended the rally, issued a statement after the speeches Thursday.

“The Republican Party represents the future of West Virginia. Today, Governor Justice joins me and other Republican leaders in Congress and at the state level who stand for policies that will improve the lives of West Virginians,” she said in the statement. “As the lead Republican in West Virginia, I stand ready to work with him to grow the economy, fight for energy jobs, and create a stronger West Virginia.”

Senate President Mitch Carmichael, R-Jackson, said he had texted and emailed Justice but had not received a reply as of 4:30 p.m.

“If this is true, I need to be there to welcome him on board,” Carmichael said before the rally. “I wasn’t planning on being at the event, but I feel kind of compelled and required to be there, to welcome our new Republican governor to the fold.”

Carmichael said he has talked to Justice about changing parties before.

“We’ve spoken about this kind of thing previously, so I’m not terribly surprised,” Carmichael said. “I just think he feels more comfortable, apparently, in the Republican Party.”

“It doesn’t really change the dynamic, because the Democratic Party in the Legislature has been opposed to him anyhow. They fought him on most of his initiatives,” said Carmichael, who worked with Justice on the final night of the regular session to attempt to put together an 11th-hour budget plan that would have included reductions in state income tax rates.

“The majority of the Legislature was elected on a platform of strong, Republican principles, and we hope the Governor embraces these principles as he joins our party.”

State Republican Party Chairman Conrad Lucas, who is away on his honeymoon, said early Thursday afternoon that he could not confirm or deny anything regarding a Justice party switch. Later Thursday, the party released a statement from Lucas that said he looks forward to Justice “reflecting the conservative values of our party and platform.”

About an hour before the Times report was published online, the West Virginia Republican Party criticized Justice on Twitter, referring to a Gazette-Mail story that noted a company caught up in a kickback scheme was still getting state contracts. “Low-Energy @WVGovernor Refuses To Stop Millions Of $$ In Contracts To Companies Who Cheated WV Taxpayers. Sad!” the tweet read.

In his statement, Lucas acknowledged the GOP’s previous fights with Justice, but said, “Jim Justice’s past differences with our Party and our Party’s platform came while he was a Democrat.”

The Republican National Committee issued a statement Thursday after Justice and Trump spoke. Chairwoman Ronna McDaniel called Justice’s switch “another blow to a Democratic Party that would rather obstruct than work to make our country great again.”

“Across America, voters have put their faith in the Republican Party because we are the Party fighting to give every individual the opportunity to achieve the American Dream,” she said. “With only 15 governorships and control of the fewest state legislatures in history, Governor Justice’s announcement is just the latest rejection of a party that is leaderless from top to bottom and unable to find a positive, unifying message. While Democrats continue to put politics before the American people, Republicans are working with President Trump to lead America towards a future with fewer burdensome regulations, greater economic stability, and stronger national security. Governor Justice, welcome back to the Republican Party.”

During Justice’s first legislative session, and the 21-day special session that followed to break a budget impasse, the governor was frequently critical of legislators from both parties.

He was outspoken in his opposition to bare-bones Republican budget proposals with significant spending cuts, which he said would harm the economy and hurt individual West Virginians.

“The bottom line is just this: They can’t get there without hurting you and they know it,” he said at one point. “You’ve got a faction saying, ‘I’m a Republican first and a West Virginian second,’ and I don’t like that.”

His attacks often could be personal, with Senate Majority Leader Ryan Ferns, R-Ohio, a frequent target. At one point, Justice likened Ferns’ exchanges with him to a poodle barking at a grizzly bear.

However, Justice worked closely with Senate leaders on a revenue plan that would have cut state income tax rates, with the cuts offset — temporarily — with a increase in the state sales tax. However, the House rejected that proposal on multiple occasions with bipartisan opposition.

When Senate Democrats also walked away from the Senate GOP plan, Justice said it was “despicable, terribly disappointing and petty politics.”