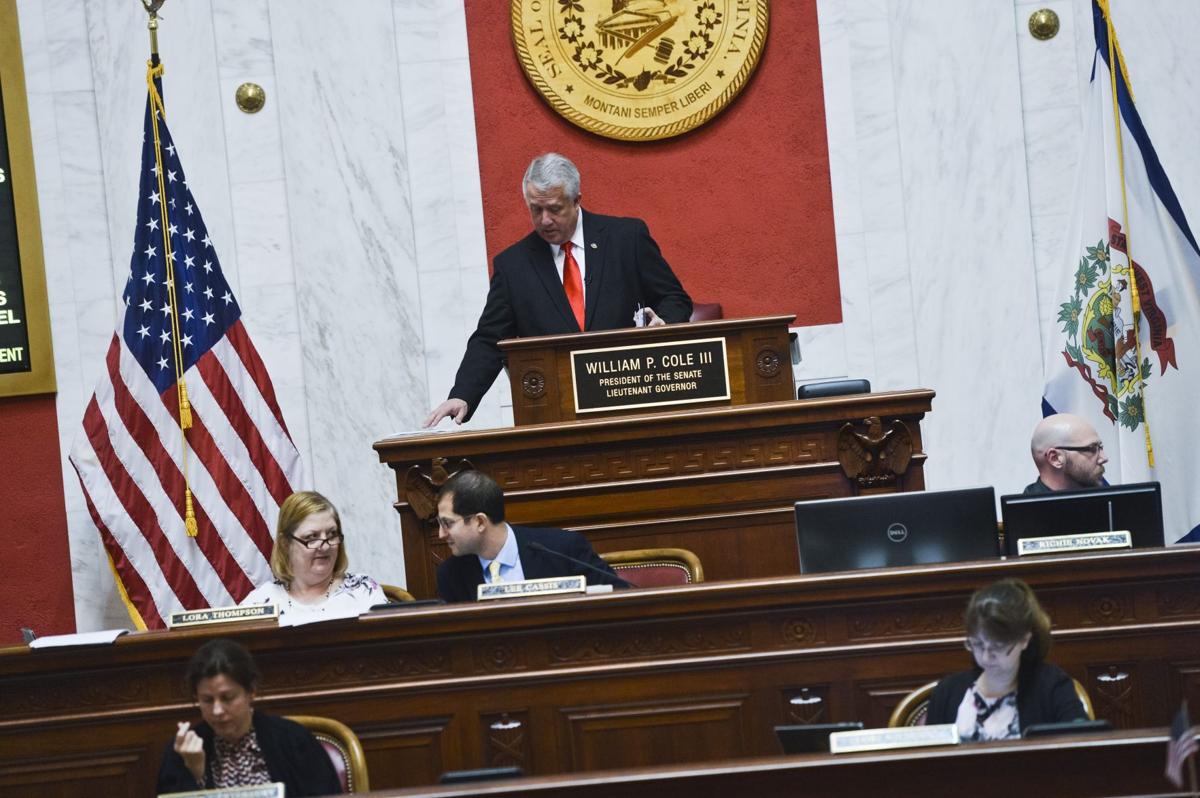 Senate President Bill Cole speaks after a 27-7 vote against the amended HB 4012 in the Senate on Wednesday. The amendment added Tuesday extended protections to LGBT West Virginians. 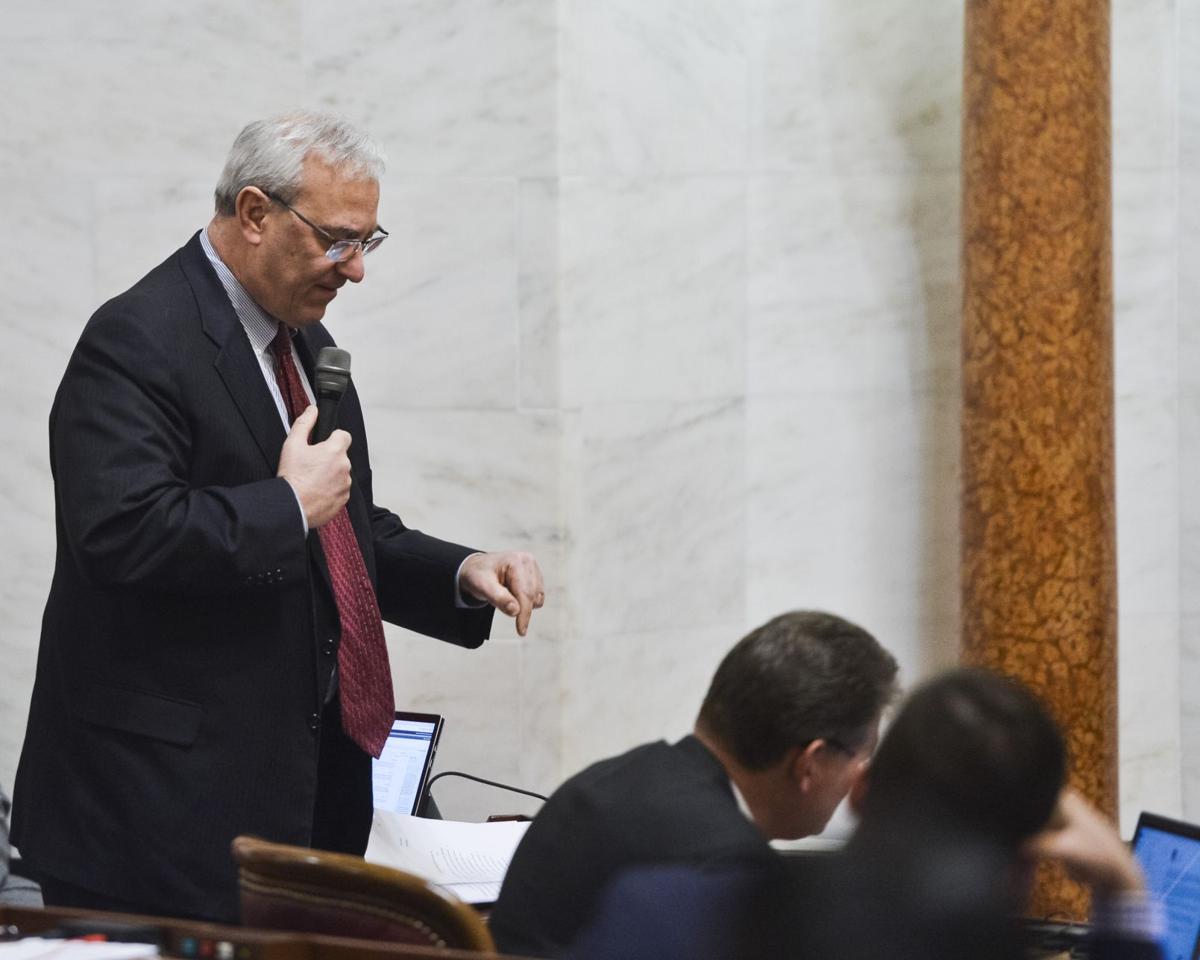 Sen. Charles Trump, R-Morgan, introduces the amended HB 4012 before a vote in the Senate at the Capitol in Charleston on Wednesday.

Senate President Bill Cole speaks after a 27-7 vote against the amended HB 4012 in the Senate on Wednesday. The amendment added Tuesday extended protections to LGBT West Virginians.

Sen. Charles Trump, R-Morgan, introduces the amended HB 4012 before a vote in the Senate at the Capitol in Charleston on Wednesday.

House Bill 4012, formerly called the Religious Freedom Restoration Act, was voted down on a 27-7 vote Wednesday afternoon, after being amended Tuesday to include protections for lesbian, gay, bisexual and transgender West Virginians.

Hoping to ease those concerns, senators had amended the bill Tuesday to say people who feel their religious beliefs are being violated could not use the bill to argue they shouldn't have to abide by nondiscrimination ordinances and laws.

Senate Minority Leader Jeff Kessler, a Democrat representing Marshall County and a 19-year senator, called it a “proud day.” Kessler opposed the bill but voted for the nondiscrimination amendment.

“It's probably one of the proudest days I have served in the Senate when we sent that kind of a signal clearly, not only to our colleagues across the hall, but to the people of the state, particularly our young people who, I think, need to know that leaders of their state stand for each and every single one of them,” he said.

Some senators said they voted against the bill Wednesday because they supported the original House version.

“Listen, we each have to live our lives as we see fit, and I know what my beliefs and feelings are, and that's how I go forward in life,” Cole said.

.@SenatorBillCole remarks on #RFRA. Cole voted against non-discrimination amendment and then against the whole bill. pic.twitter.com/T073BtSJE1

“The amendment [Tuesday] totally gutted the bill and actually turned it into a bill that was hostile to religious freedom,” he said. “The provisions that were contained within there specifically set aside that your religious freedom might be getting violated any time a local ordinance related to discrimination were enacted.

“That sounds like it's very tailored to one particular group of people, but the reality is, there's a lot of different kinds of discrimination ordinances out there. This effectively turned this bill into a 'discriminate against religious people bill.' We'll be back next year.”

The conservative Family Policy Council of West Virginia, which rallied its supporters to lobby for the House version of the bill, had sent emails and written social media posts in opposition to the nondiscrimination language included Tuesday evening, saying that it “gutted” the bill.

Sen. Corey Palumbo, D-Kanawha, noted that proponents of the House bill were using social media to oppose the amendment.

“When you say [that because] you can't use this bill to invalidate nondiscrimination ordinances, that that 'guts the bill,' then you know what the bill's about,” Palumbo said. “When you get people saying that this amendment would allow men to go into women's bathrooms, that's just absurd fearmongering. That's all that is. We have nondiscrimination ordinances in all kinds of cities. Where has that ever happened?

“It's disingenuous, at the least, and intentionally false and misleading, at the worst, and that's what the proponents — not the proponents in the Legislature, but the outside proponents — are trying to do is scare people. They're being totally dishonest, and it's despicable.”

The Family Policy Council, which opposes same-sex marriage and other laws meant to expand rights to the LGBT community, has told its supporters that local nondiscrimination ordinances that expand protections to the LGBT community allow men to put on dresses, sneak into women's bathrooms and assault women and children. The organization used the same rhetoric to oppose Tuesday's amendment. The ordinances permit no such action.

Allen Whitt, president of the organization, would not comment Wednesday evening.

Senate Majority Leader Mitch Carmichael, R-Jackson, voted for the amendment after an emotional speech Tuesday, and also voted for the bill Wednesday.

The bill had passed the House of Delegates on a 72-26 vote. Speaker of the House Tim Armstead, R-Kanawha, said in a statement that he was disappointed by the Senate's decision.

“The defeat of this bill was driven by the negative hyperbole and misinformation that incorrectly characterized the purpose of this legislation,” he said. “This bill absolutely did not condone or encourage discrimination in any way.

“I continue to believe we should have state legislation, mirroring current federal law, that protects individuals' sincerely held religious beliefs from government infringement.”

Jennifer Meinig, executive director of the American Civil Liberties Union of West Virginia, sent out a statement thanking the Senate, saying that the ACLU is “beyond pleased that the WV Senate forcefully rejected discrimination under the guise of religion.”

“As West Virginians, we respect the dignity and humanity of one another. We are bigger than that. We are, as a state, more than divisiveness and hatred. We are welcoming and inclusive,” she said. “What the West Virginia Senate did today was to stand firm against misguided efforts to turn back the clock to a time when we look at each other as enemies. Instead, the Senate chose to see each and every one of us as part of the fabric of our society, each valued for our own individual talents and traits.”

“With similar discriminatory legislation being considered in states across the nation, West Virginia sent a clear message to the world that Mountaineers do not tolerate discrimination,” he said. “This action proves once again that bipartisan support for nondiscrimination principles is a guiding force in our state.

“We are grateful to the Senators and Delegates who voted to uphold nondiscrimination principles and to honor the dignity and humanity of all West Virginians regardless of who they are or who they love.”