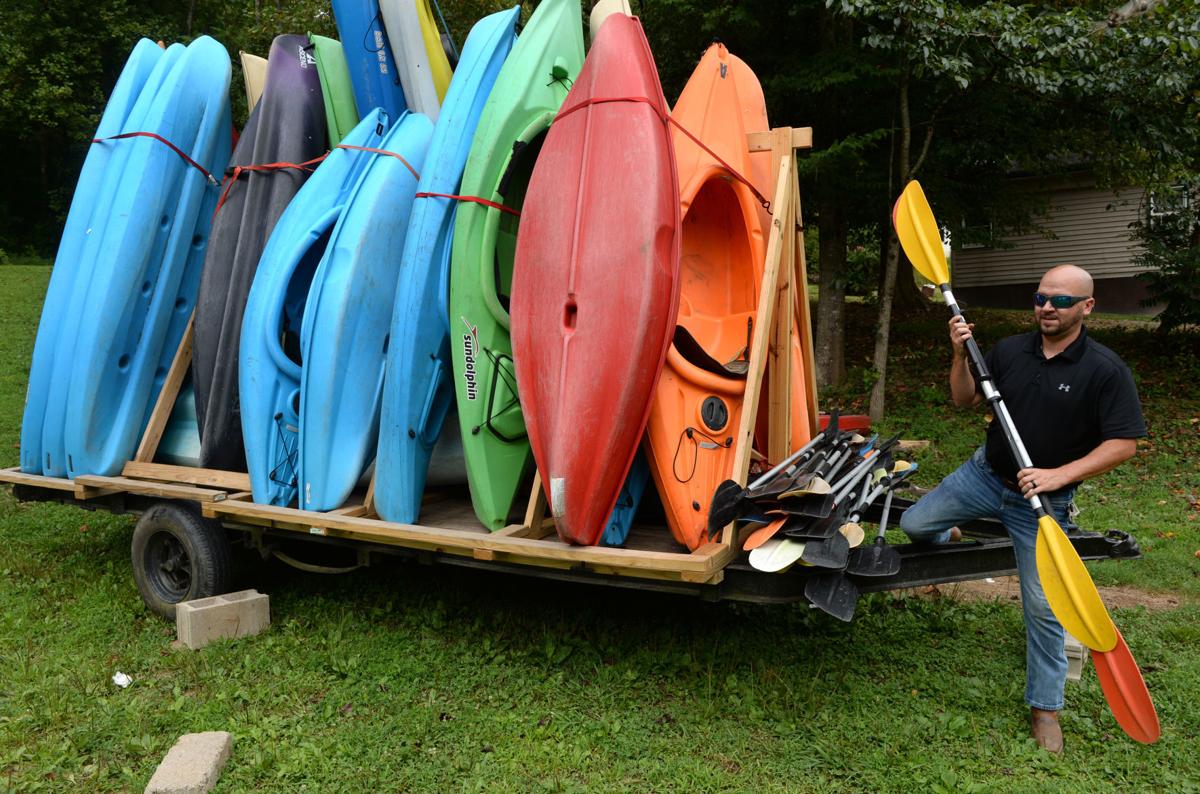 Jeff Petry, who works full-time at an engineering firm, launched Big Coal River Outpost, a kayak rental business, at his Boone County home last year. More and more people are coming to Petry’s hometown of Ashford to kayak and fish on the river. 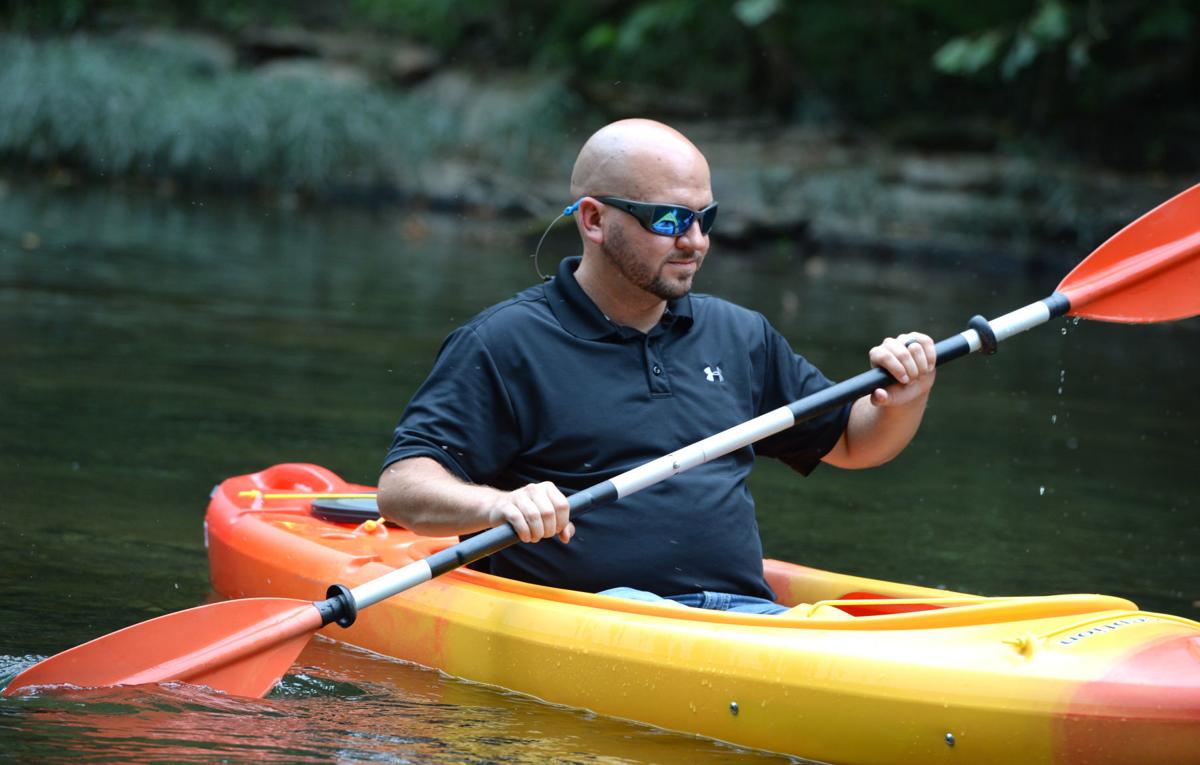 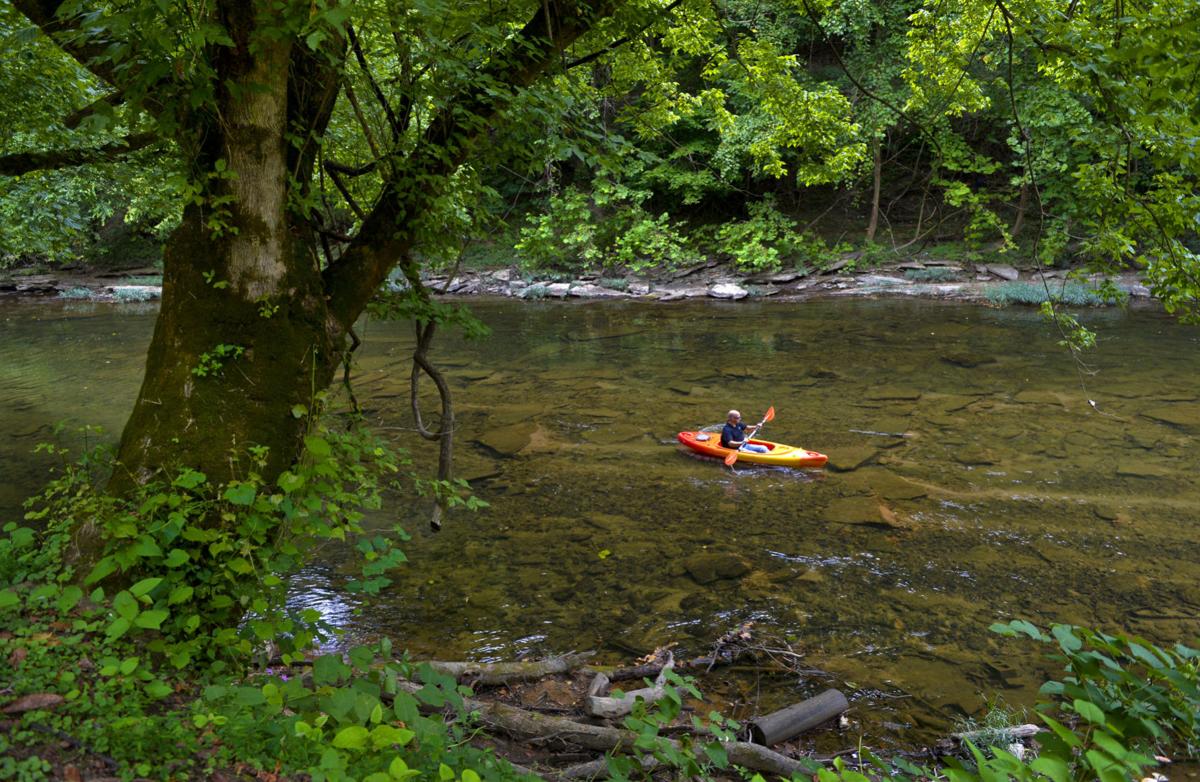 Jeff Petry takes a kayak down the Big Coal River on a hot August day.

Jeff Petry, who works full-time at an engineering firm, launched Big Coal River Outpost, a kayak rental business, at his Boone County home last year. More and more people are coming to Petry’s hometown of Ashford to kayak and fish on the river.

Jeff Petry takes a kayak down the Big Coal River on a hot August day.

A rainbow of kayaks stands in Jeff Petry’s yard, their neon colors unmissable as you drive down a narrow, winding road in Ashford.

Last year, Petry, a full-time project manager at an engineering firm, invested his own money in dozens of kayaks and launched a rental business from his home in Boone County.

He shuttles kayakers to entry ports along the shallow river, sometimes more than 10 miles away from his home.

More and more people are coming to Petry’s hometown to kayak and fish on the Big Coal River, and he is happy to showcase the quiet streams and untouched land in the former mining town.

“I like seeing people happy,” he said. “And if they can have a good time in my backyard, that’s even better.”

Petry’s business, Big Coal River Outpost, is one of two kayak rental businesses that have opened in the past year in Boone County. The businesses, operated by local residents, follow a growing interest in water tourism in Southern West Virginia, and signal hope for other economies in the wake of coal’s decline.

“I think this is one of our lifelines,” Petry said. “Everyone is kind of hanging their hats on Hobet, but we’ve got a river here that’s already clean. We’ve got plenty of room for expansion.”

In May, Dain and Brenda Bender opened Little Coal River Camping & Kayaking, in Julian, about 20 minutes from the Southridge shopping center in South Charleston. Along with kayak rentals and a shuttle service to Madison and Danville, the business offers a handful of RV and tent campsites. A concession stand serves hot dogs, snacks and other things.

The couple owns multiple businesses in Boone County, including a construction business and pawn shop.

Brenda Bender said that, last year, she noticed an increase in customers coming to their pawn shop looking to buy kayaks. Her husband saw the interest as a business opportunity.

Business has been “touch and go,” Brenda Bender said. The couple has hired a few people to work in the concession stand and shuttle service.

“I’m hoping it will take off,” she said. “Hopefully, as it grows, we can hire more people.”

The growing interest in kayaking in Southern West Virginia can, for many reasons, be attributed to Bill Currey.

In 2004, Currey co-founded the Coal River Group, a nonprofit in Tornado, that looked to promote tourism on the three Coal Rivers — the Big, Little and main — in four counties: Boone, Lincoln, Kanawha and Raleigh.

“The history of this area is intertwined with fun on the river,” Currey said.

The Coal River was labeled “the dirtiest river in the country” in 2002, following an American River Association report. Currey, who had paddled on the river since he was a child, took it as a challenge to clean up the water in his backyard.

The Coal River Group worked on cleaning out the rivers, mostly murky with soot from Corridor G construction, Currey said, and volunteers removed dumpster-truck-loads of trash from the water.

The group also rents kayaks out of its Tornado headquarters, where summer interns receive college credits and cash tips for their work promoting water tourism.

“We took the fear of Southern West Virginia away from tourists who had never been before,” he said.

In June, nearly 2,000 people participated in the Coal River Group’s Tour de Coal, one of the largest one-day paddle events in the country. The annual 11-mile float trip runs from Tornado to St. Albans.

And Kevin’s Lazy River Adventure, a one-day event that started 13 years ago as a memorial, brought more than 1,000 people to Boone County for a 101/2-mile float down the Big Coal River in July.

Petry benefited from the event, renting out his share of kayaks to participants.

“It brings money, and it brings millennials and makes them want to stay,” Currey said. “It presents a different picture than what they’ve seen.”

Currey’s promotion of water tourism has extended past the Coal rivers, and many people trying to grow river-rated businesses cite him as an influence and guide.

Pete Runyon, who is working to build up water tourism on the Tug Fork River in Southern West Virginia and Eastern Kentucky, said Currey reached out to help him.

“He has taught me so much,” Runyon said.

The Tug Fork River, Runyon explained, was once a dumping ground for trash and was darkened with coal slurry. Mine closures over time have helped flush the water out, and outside groups have cleaned up the water.

“The fishing is tremendous,” he said. “We’re noted for our smallmouth bass, especially.”

Several years ago, Runyon approached Matewan leaders about turning the town into a kayak destination.

He detailed a number of businesses, including a campground and kayak rental business, opening in Matewan and Williamson. The Fish Trap, opening soon in Matewan, will sell live bait, fishing gear and West Virginia fishing and hunting licenses.

Runyon operates a Facebook page, “Friends of the Tug Fork River,” with more than 6,200 followers who regularly share photos of fishing, paddling trips and fun on the river.

“We have people from all over the country come here to kayak, because of the Facebook page,” he said. “This is a regular vacation area, if we can work on it.”

‘I just want to see change’

James Frye, fresh out of college, is working with communities across Southern West Virginia to coordinate cleanup and boost tourism of the Guyandotte River. He is an interpretive trail consultant through the AmeriCorps VISTA program, and the position allows him to focus solely on promoting growth in multiple counties that encompass the river.

He recently led a cleanup near Branchland, in Lincoln County.

“We pulled 120 tires out of the river in a 2-mile stretch. There was scrap metal, a water heater and kitchen parts,” Frye said. “The idea is to make it as clean as possible, and that is an ongoing process.”

Water tourism on the Guyandotte could be an added stream of revenue for counties, including Wyoming, where tourism has gotten a recent boost from the Hatfield-McCoy ATV trails.

“The communities are putting forth a lot of effort and energy,” Frye said. “It’s difficult to find resources to help perpetuate growth.”

In Boone County, despite the massive success of events like Kevin’s Lazy River Adventure, dwindling finances make it difficult to rely on local government support.

Boone, in an effort to make up a multi-million dollar budget shortfall due largely to coal’s decline, recently proposed eliminating lights and maintenance at county-owned parks. The list of parks included Dartmont Park, where the river adventure ends.

Currey noted Boone’s financial difficulties, and then emphasized, “[Leaders] need to support the boat launches [that] bring people in to spend money. You don’t want to cut back on something that you’re winning with.”

Petry has seen his business ebb and flow since it launched last year. But he said he dreams of a day the kayak rental business could be his main source of income and a source of jobs for his community.

“I just want to see change,” he said. “You hear all the horror stories of Boone County, and all the bad. Then, you get out here, and there are people having a good time.”

Amelia Ferrell Knisely is a corps member with Report for America, an initiative of The GroundTruth Project. Reach her at amelia.ferrell@wvgazettemail.com, 304-348-4886 or follow @ameliaknisely on Twitter.