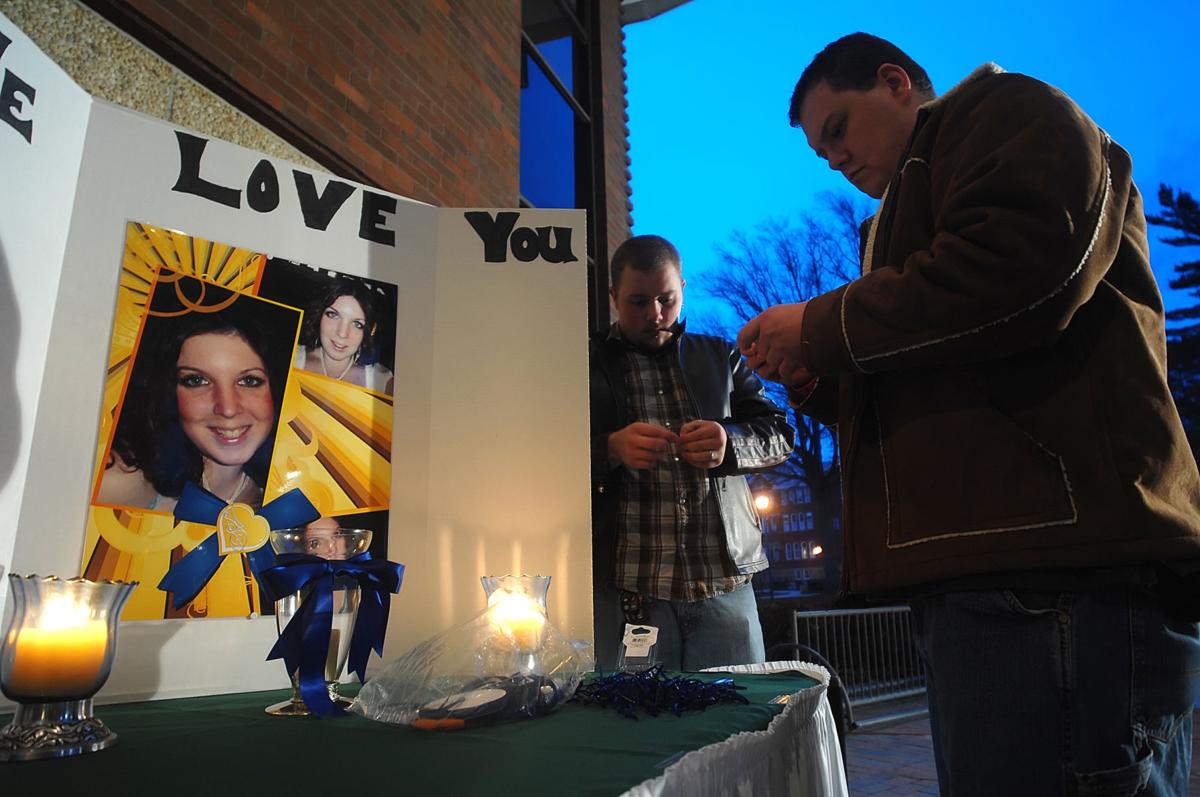 Joshua Conley (right) and Isaac Hay help set up a display for a candlelight vigil at the Marshall University student center on Dec. 20, 2007, in Huntington. The vigil was for Marshall student Leah Hickman, who was last seen alive on Dec. 14, 2007. One day after the vigil, investigators found her body in a crawl space at the apartment building where she lived with her half-sister, Jessica Vickers. 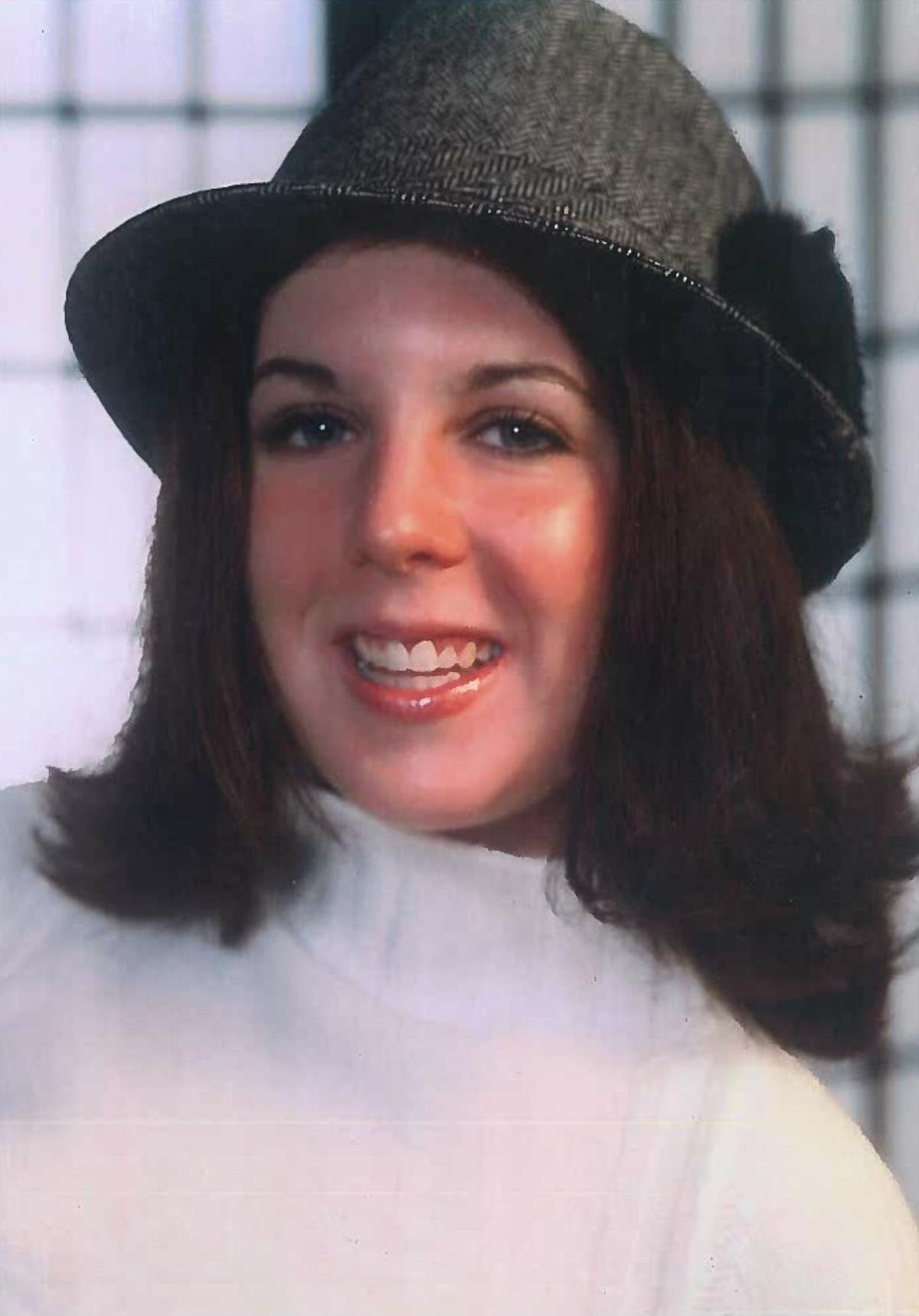 Leah Hickman was a journalism student at Marshall.

Ten years after her mysterious death, Leah Hickman lives in memories and shades of blue.

Hickman was last seen alive on Dec. 14, 2007. Blue ribbons adorned the trees outside her apartment on Eighth Avenue, in Huntington, where the Marshall University student was found murdered.

Grace Baptist Church, at 7051 Ohio River Road in Point Pleasant, will hold a community prayer vigil at 6:30 p.m. Thursday — the 10th anniversary of her death.

Guests are asked to wear blue in honor of Hickman and her favorite color. She was the daughter of Ron Hickman and Sherry Russell.

The church’s nursery cared for Hickman after she was born on Nov. 11, 1986. She later joined its Sunday school, her father said.

Ron Hickman used to pray that his daughter would be found alive. Now he prays for justice.

“I still want to press as much as I can for an answer,” he said.

The father last spoke with his daughter on the day she vanished, a Friday. They caught up on the week’s events, and Leah Hickman said she had to work the next day.

She missed her shift at Dress Barn. As a model employee, Hickman’s disappearance raised urgent concern.

Tips flooded the Huntington Police Department, and residents plastered hundreds of flyers around the city.

Police found Hickman’s keys, purse and packed bags at her apartment. She’d planned to visit her parents’ homes in the Point Pleasant area, something she did most weekends.

Initially treated as a missing-person case, Hickman’s disappearance garnered national attention on cable news for the better part of a week.

Ron Hickman said he was driving to Huntington with a batch of flyers when he received the dreaded news.

His daughter’s body was found on the afternoon of Dec. 21, one week after she went missing. Someone had strangled Hickman and concealed her body in the common laundry room at her apartment.

Investigators found her body in a crawlspace as they collected forensic evidence. Nothing from the scene has led to criminal charges in Hickman’s death, and a suspect has never officially been named.

Her half-sister and roommate, Jessica Vickers, had said she last spoke with Hickman at their apartment. Hickman washed dishes and shared the details of her new college schedule. She had just received her grades for the semester, and she was happy.

The sisters enjoyed watching TV shows such as “America’s Next Top Model,” “Friends” and “Arrested Development.”

“She really liked to be with people she loved,” Vickers said in 2007.

Hickman’s early education took place at Ohio Valley Christian School, in Gallipolis, Ohio, before she went on to graduate from Christ Academy, in Point Pleasant

She later enrolled at Marshall to study broadcast journalism — the perfect career for someone who valued the community, Ron Hickman said.

“Leah, she was pleasant and she was nice,” he said. “She cared for people.”

Hope and unanswered questions remain a decade later. So, too, does the outpouring of love from friends and family.

“She had a lot of friends and, of course, I come from a large family,” Ron Hickman said. “People in the community really turned out to show their support.”

Dress Barn offered a $10,000 reward before Hickman was found. After her death, the business temporarily closed on the weekend before Christmas. A sign on the door said Dress Barn had closed out of respect for Hickman, who had worked there for about five months.

Friends also had held a candlelight vigil and a benefit concert to raise awareness about her disappearance.

“I’d like to thank all the community and my friends and family, my church family, for all the support they have given for the last 10 years,” Ron Hickman said.

A DNA test at a special lab in Arizona brought Hickman’s family new hope, but the results yielded no answers in 2009.

The young woman’s murder again received attention in 2014, after an unknown person spray-painted a message on her former apartment: “Who Killed Leah Hickman?”

Ron Hickman spoke with Huntington Police Lt. John Williams at least once a month about the case, until Williams retired from the police department.

“They still follow up every lead and hope to solve it,” he said. “It’s still an active investigation.”

Anyone with information about Hickman’s death is encouraged to call the department’s Criminal Investigations Bureau, at 304-696-4420.