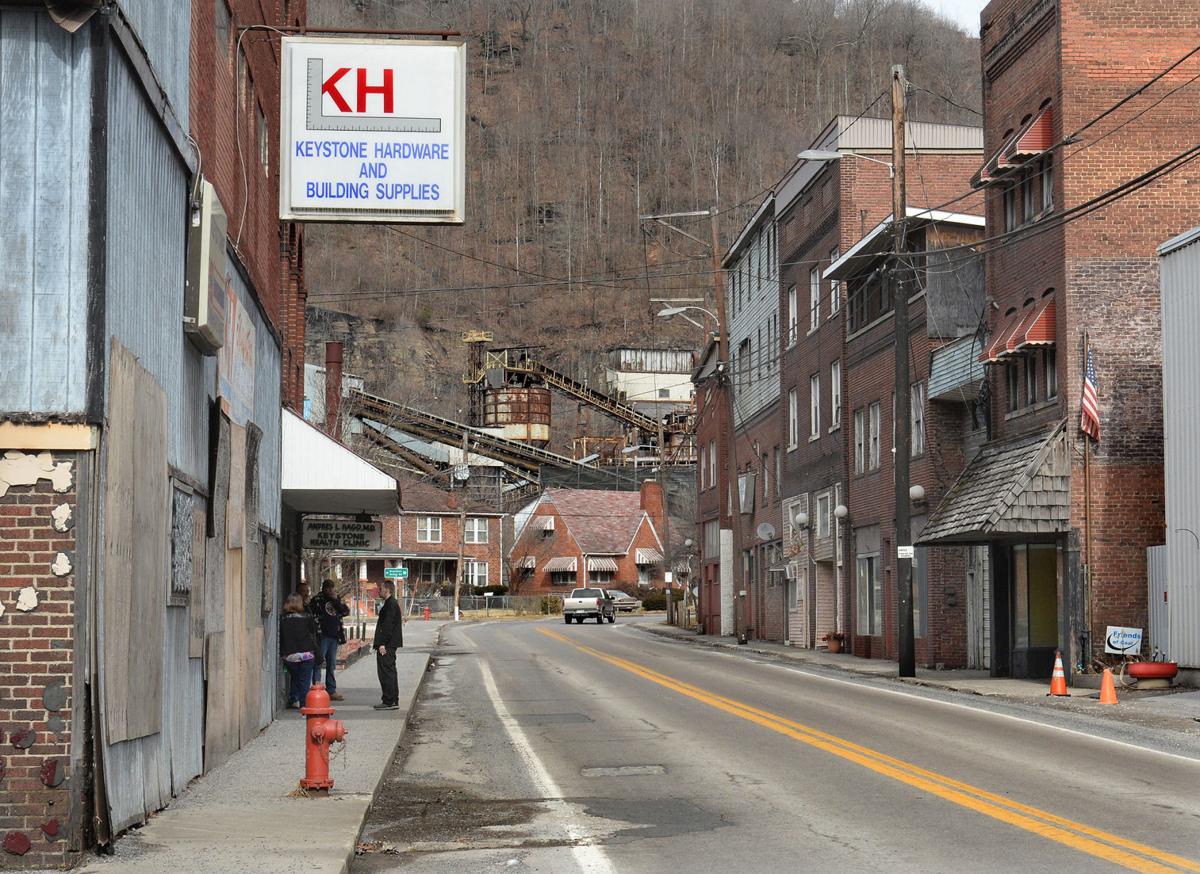 People stand in front of a doctor’s office on East Main Street in Keystone. Remnants of the town’s mining past stand in the distance. 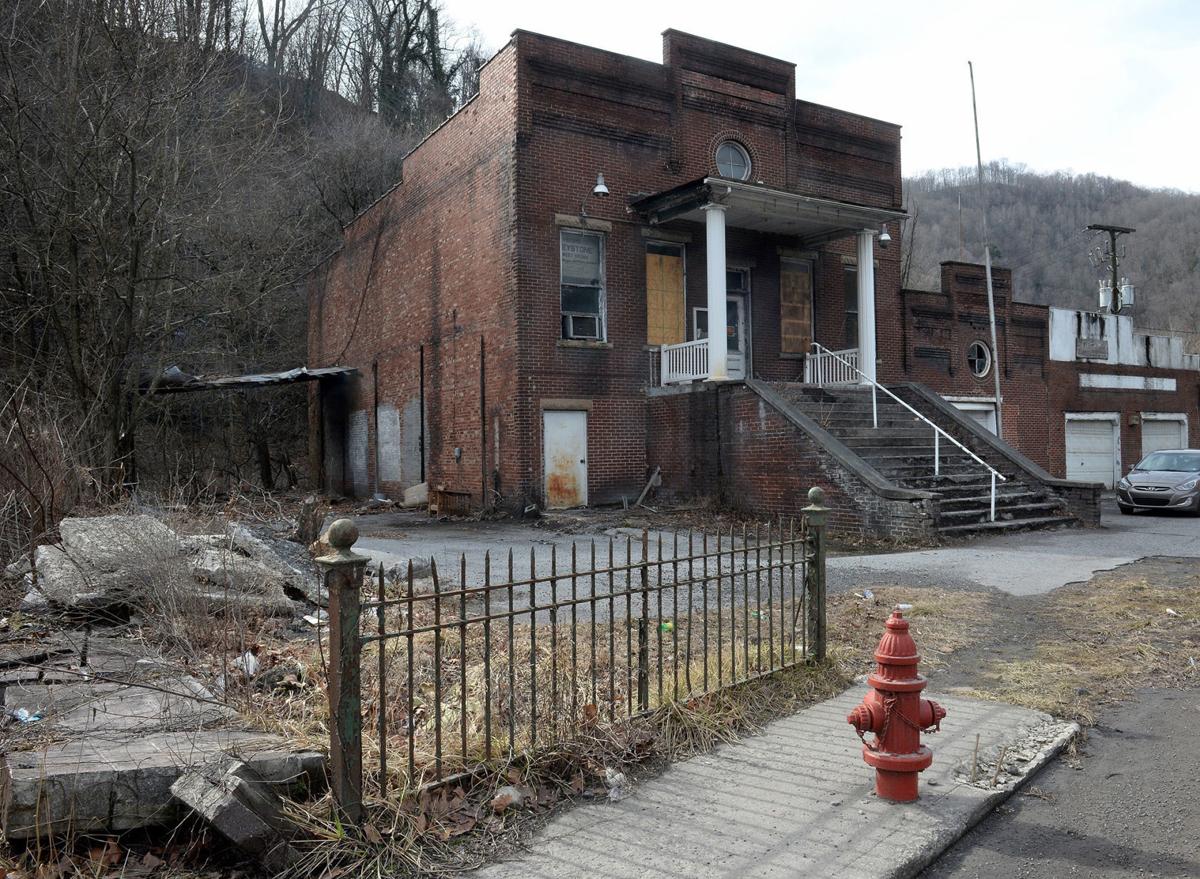 The decrepit building which used to be Keystone’s City Hall now houses the town’s water plant.

People stand in front of a doctor’s office on East Main Street in Keystone. Remnants of the town’s mining past stand in the distance.

The decrepit building which used to be Keystone’s City Hall now houses the town’s water plant.

KEYSTONE — One of the only things standing between the residents of Keystone, in McDowell County, and more reliable water service is access to a backhoe, said Vondalere Scott, the town clerk and current acting mayor.

For some residents, it’s been more than one week since they’ve been able to run water from their home faucets. A broken pipe disrupted water service last week, and another one again affected more residents a few days later.

The town, which serves about 80 customers on its water line, doesn’t have equipment like a backhoe available to dig a hole deep enough to fix the pipes in a timely manner, and it doesn’t have the money to buy or rent one for long enough to get the work done, Scott said.

“It costs us $200 to $400 a day to rent one, and we don’t have enough money usually to pay our regular bills, our daily or monthly needs. It’s not feasible. We used to get help with things like this, but not anymore, not in a long while,” Scott said. “The state ... why can’t they donate to us through [the Department of Highways] or something else? No one else will stand up and help, either, but that’s just how things go in Keystone.”

A few years ago, Scott said the state did just that — allowed the city to borrow equipment to repair things as needed. But in recent years, as troubles have compounded on the small town, assistance has been insubstantial.

The town’s water system, which is comprised of a mishmash of terra cotta, concrete and steel piping crisscrossing under its roads and buildings, was installed in the early 1900s when Keystone was a coal company town. In the years since, no maintenance has been performed on the system, and as money has continued to leave the town — per the Secretary of State’s business database, there are only two businesses operating in Keystone, neither of which pay the total business and occupational taxes they owe, Scott said — those in charge have been left with more debt and less money to fix problems.

Last year, residents voted to unincorporate the town that’s home to about 250 people, but until debts are paid off — Keystone owes almost $40,000 to Appalachian Power for unpaid electric bills — Scott said they’re unable to move forward with the proceedings.

Earlier this year, more than $6.3 million in grant funding was secured to replace the town’s water system, along with the one in neighboring Northfork, but per the Public Service Commission, construction on the project isn’t slated to start until fall at the earliest, and it will take at least a year — possibly longer — to complete.

When service is out, like it has been, drinking water is available at city hall, off U.S. 52, the main drag of Keystone.

Once work is done on the water project, the McDowell County Public Service District will take over Keystone’s system, but until then, those in the town are restrained by resources and funding as they try to keep things running.

“The PSD, they step in and help when they can, but their resources — mostly manpower — are limited, too. Same with the fire department; they help, but there’s only so much they can do,” Scott said.

The town has been under a boil-water advisory for more than six years due to the lack of a certified operator and constant leaks that make it impossible to lift the advisory.

When the PSD takes over the town’s water system, Scott knows service will be more efficient, and the repairs will mean water will be more reliable. But the takeover will mean other changes, too.

There are currently no water meters installed on Keystone’s lines, meaning customers pay about $24 for their water bills, no matter how much they use. If they don’t pay, it’s impossible to shut water service off, so for years many have gone without paying a single water bill.

PSD service will mean certain shutoffs for unpaid bills and, Scott believes, a possible increase in rates — the first in more than 10 years for customers.

“They will cut you off and they will make you pay. They should,” Scott said. “Water is a necessity, it’s something everyone needs, but it costs money to provide. It’s not free for us and it won’t be free for them. They just have the means to collect what they’re owed.”

Even if water bills were paid by everyone who owes, Scott said the town still wouldn’t have enough money to pay for what it needs, including servicing its debt, paying employees or for its regular functions.

In the past year, two mayors have quit on the town, leaving Scott as acting mayor. For 24 years, Scott has worked for the town of Keystone in almost every position but elected mayor. Today, in addition to acting as mayor until another election is held, she works as the town’s treasurer, clerk, recorder and secretary, as well as in any other positions that need to be filled.

When finances got especially tight last year, Keystone cut its police force and business days for the town dropped to three days a week instead of five. Town workers willingly took pay cuts to limit the strain of payroll on finances, and despite holding more than three positions, Scott is only taking one check for her work.

When pay day does arrive for town employees, Scott is also the last one to cash her checks, leaving a small stack of unopened paychecks on her desk as she waits to ensure the other employees get theirs to clear first.

“If I didn’t do it, no one else will. No one else would. It’s what you do for your home if you want it to survive,” Scott said.

Dennis Robertson, who was mayor of Keystone from 2005-2012, said the town’s troubles aren’t new, but there is more apathy now than there was 15 years ago, and less of a willingness among residents to try and understand where the problems come from.

“People don’t care. If it’s not affecting them, if it’s their neighbor’s problem but not their own, they feel no responsibility or motivation to get something done,” said Anita Winfree, city manager. “They complain, they call, and when they do I tell them one thing: come down to city hall and see how things are working here, then see how you can help if you want it to be better.”

Winfree grew up in Coalwood, about 20 miles from Keystone, and moved back to McDowell last year after spending several years out of state. When she settled into Keystone, she said she realized there was a lot of work that needed to be done in the town, and people who lived there needed to help.

Those in charge, elected or otherwise, couldn’t do it themselves, she said.

“I walked into city hall, I talked to Vondalere — she was here, she’s always here, I swear — and I asked, ‘What can I do around here? What do you need from me?’ Then, I took a position on city council and have been doing other work here ever since,” Winfree said. “Other people, they don’t seem to want to put that effort in, and instead they want to blame, blame, blame.”

The current water troubles in Keystone are illustrative of the bigger challenges facing the town that once produced mountains of coal for West Virginia, and was once home to what was allegedly the most profitable community bank in the nation before it was shut down by federal investigators after they discovered a $515 million discrepancy in fraudulent bookkeeping.

Today, people call to complain the water is out, and they’re told bottled drinking water is available at city hall.

“Then, they want us to bring it to them. We can’t do that, go door-to-door when there’s only two of us working here anyway,” Scott said.

One man is responsible for operating the water system, as well as garbage services and performing all maintenance duties around the town. Scott said he’s not getting the whole pay he’s owed — a norm for the town, and a parallel to how the city provides services for its businesses without taking in the taxes it’s owed.

“He’s spread thin, and then everything else is spread thin, too,” Winfree said. “It’s like, looking at the money we could be bringing in, it still wouldn’t be enough, but maybe we could give people what they’re owed, maybe we could invest in some of the smaller things we need to make things a little better.”

In the town’s early days, coal mining brought prosperity to Keystone — a rail line through town meant a constant stream of visitors and workers, and coal production was booming. As with many towns and cities in West Virginia’s coalfields, though, taxes paid by coal companies when they operated were not substantial enough to set Keystone up for long-term success.

When companies started leaving the area, taking profits with them, they abandoned the infrastructure they installed, like water systems, into the hands of people who didn’t have the means to maintain them.

A Bluestone Coal Company mine, owned by Gov. Jim Justice’s family, still sits at the entrance to Keystone, and Norfolk Southern railways still load and transport coal through the town, but there is nothing paid to the town. Instead, Scott said, now Keystone pays — in different ways — for the consequences of coal in the region.

Coal trucks regularly pull off the road on places explicitly marked prohibiting such activities. When they do, water lines under the ground burst under the pressure, leaving residents without water and the town on the hook to pay for repairs.

“There’s no responsibility here for the hurt they can put us through, the costs they put onto us,” Scott said.

Robertson, Keystone’s former mayor, was a coal miner himself, working for years in that Bluestone mine before he retired. He said he respects the opportunities mining provided to his home for decades, but Scott wishes today the companies could respect the people left in the town they abandoned, and that others, outside the town, would remember how they once prospered off the backs of people in areas like Keystone.

“We’re still here, we’re still alive, and no one wants to acknowledge it. We’re not going to cry and whine for help, but we need it — especially from the people living here, but we’ll welcome it from others,” Scott said. “We’ve always been the city that gave more than it got, that’s just the curse of Keystone. But it’s about time people started giving some back.”’

Caity Coyne is a corps member

with Report for America, an initiative

of The GroundTruth Project.