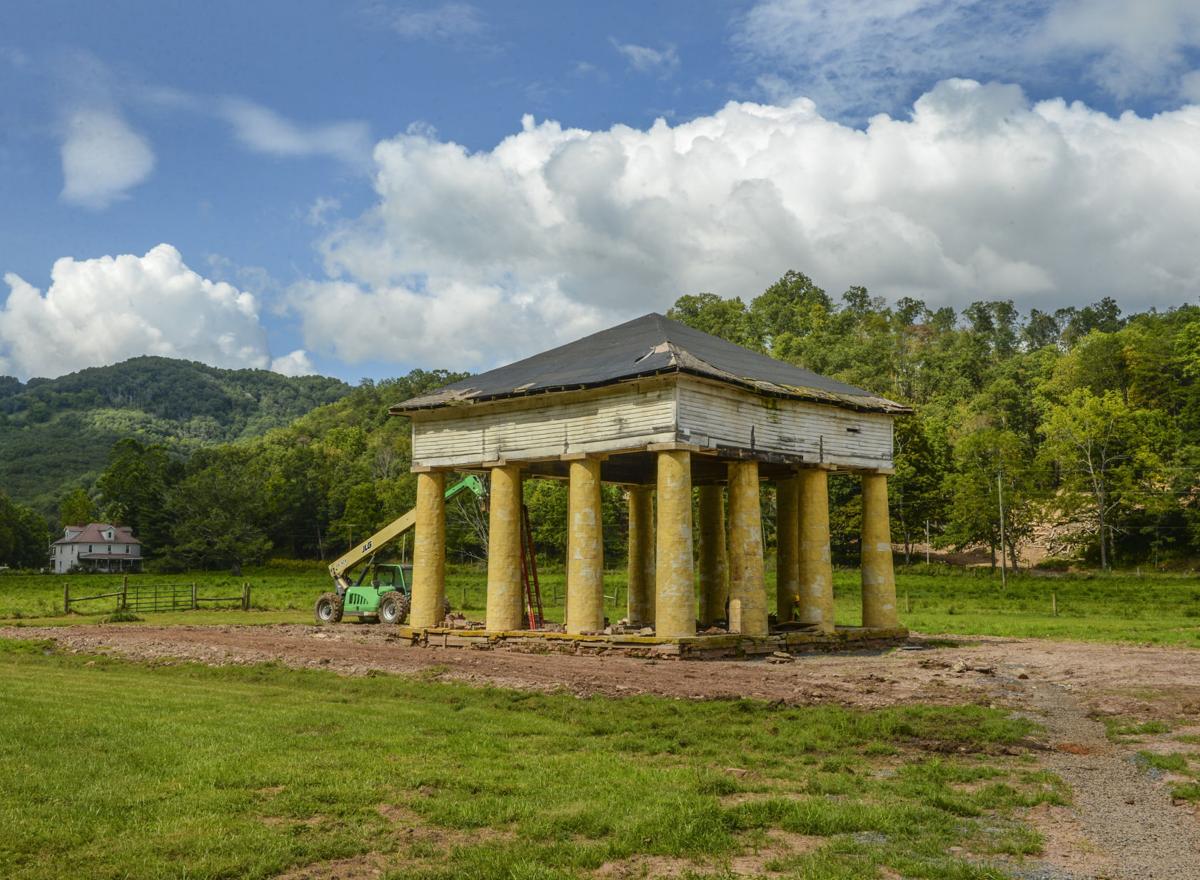 The Blue Sulphur Springs pavilion stands in a field in Greenbrier County while restoration continues. 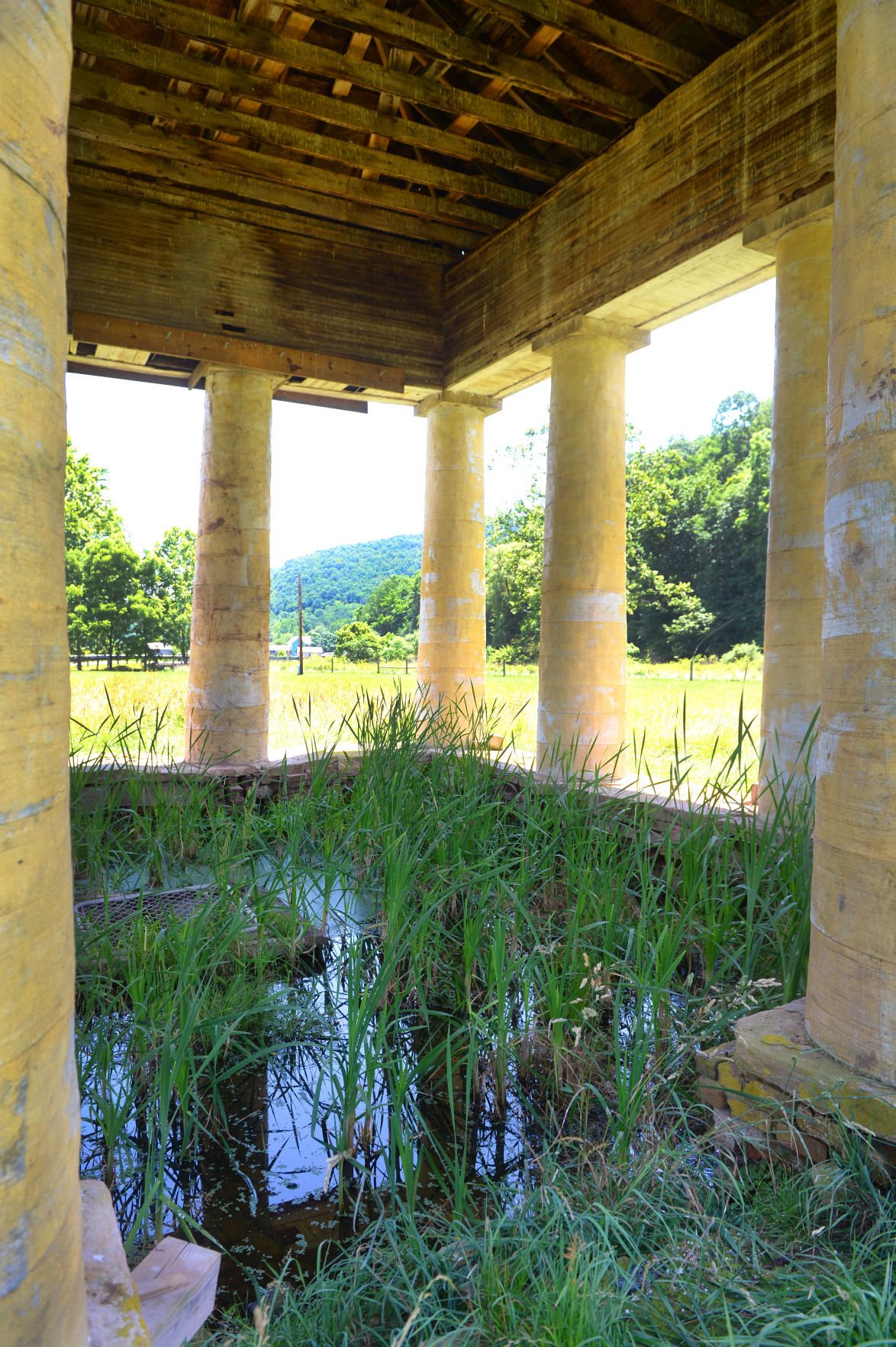 The pavilion at Blue Sulphur Springs before restoration. 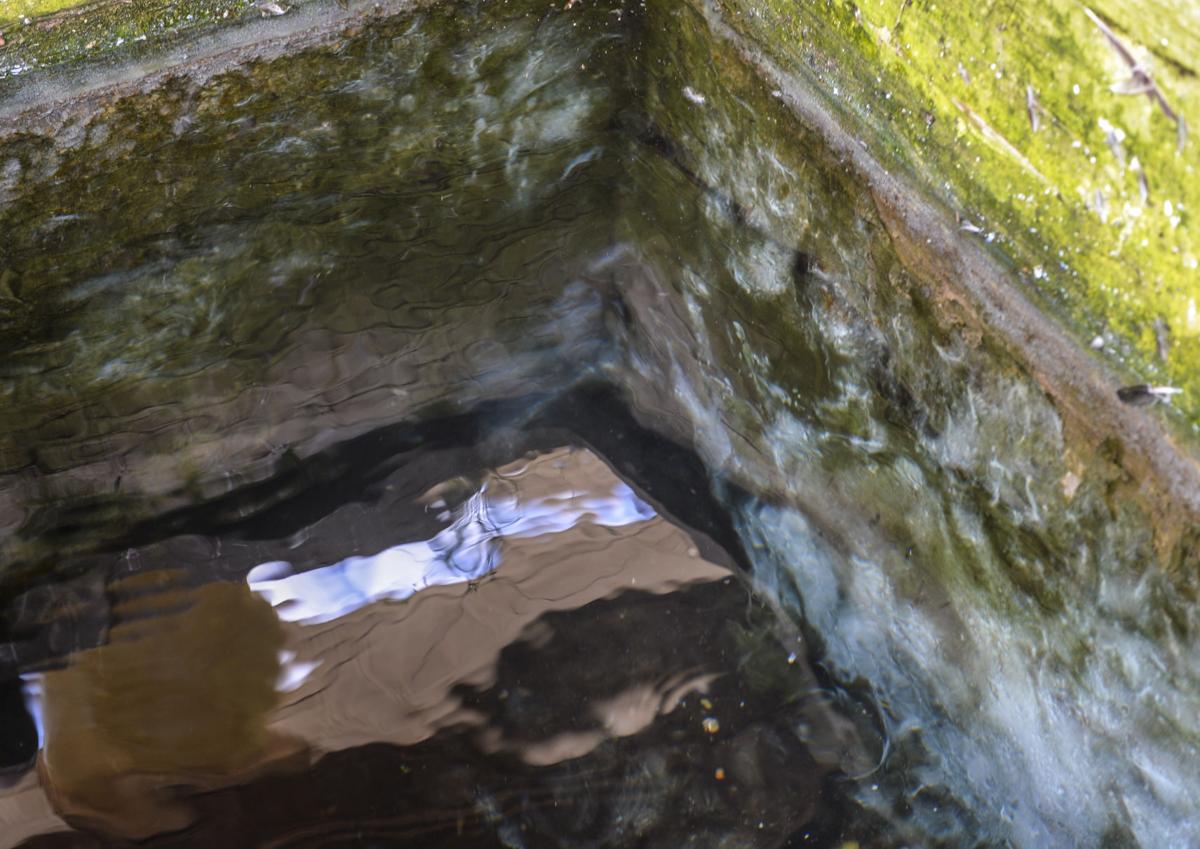 Water in the spring at Blue Sulphur Springs. 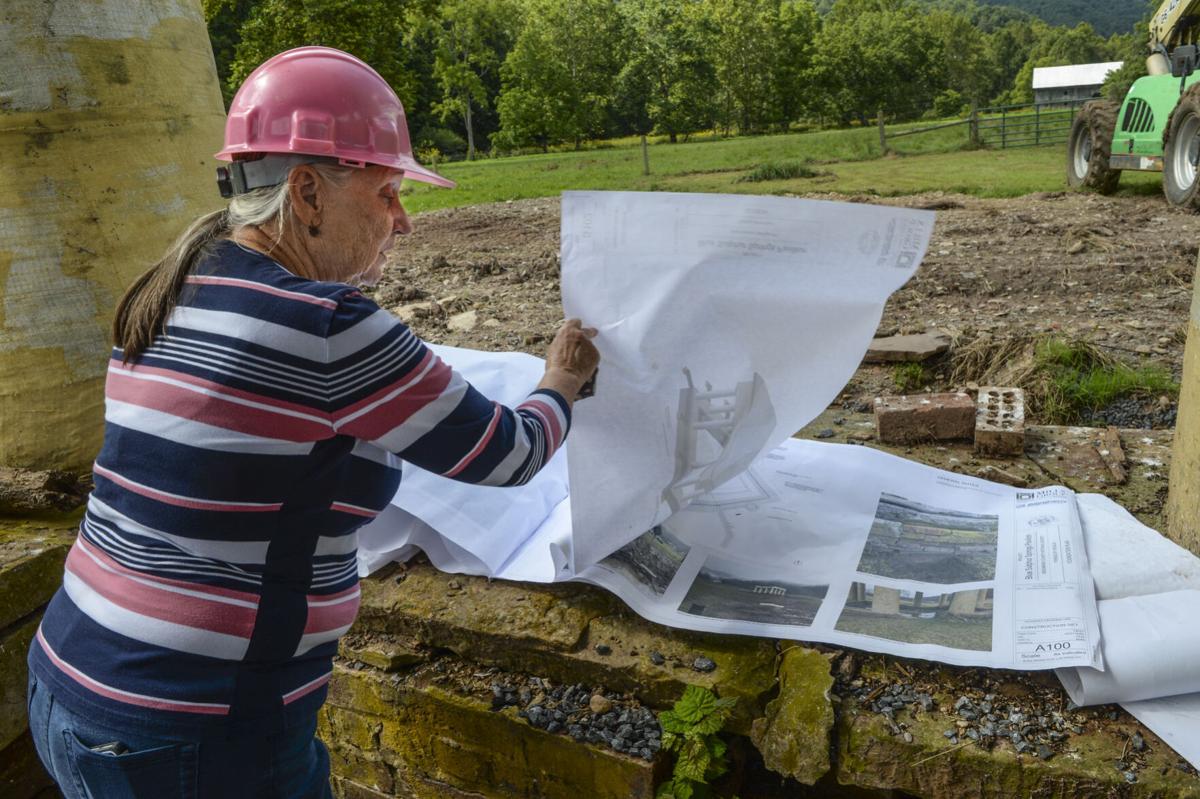 Margaret Hambrick looks at drawings of the plans for the Blue Sulphur Springs pavilion restoration. 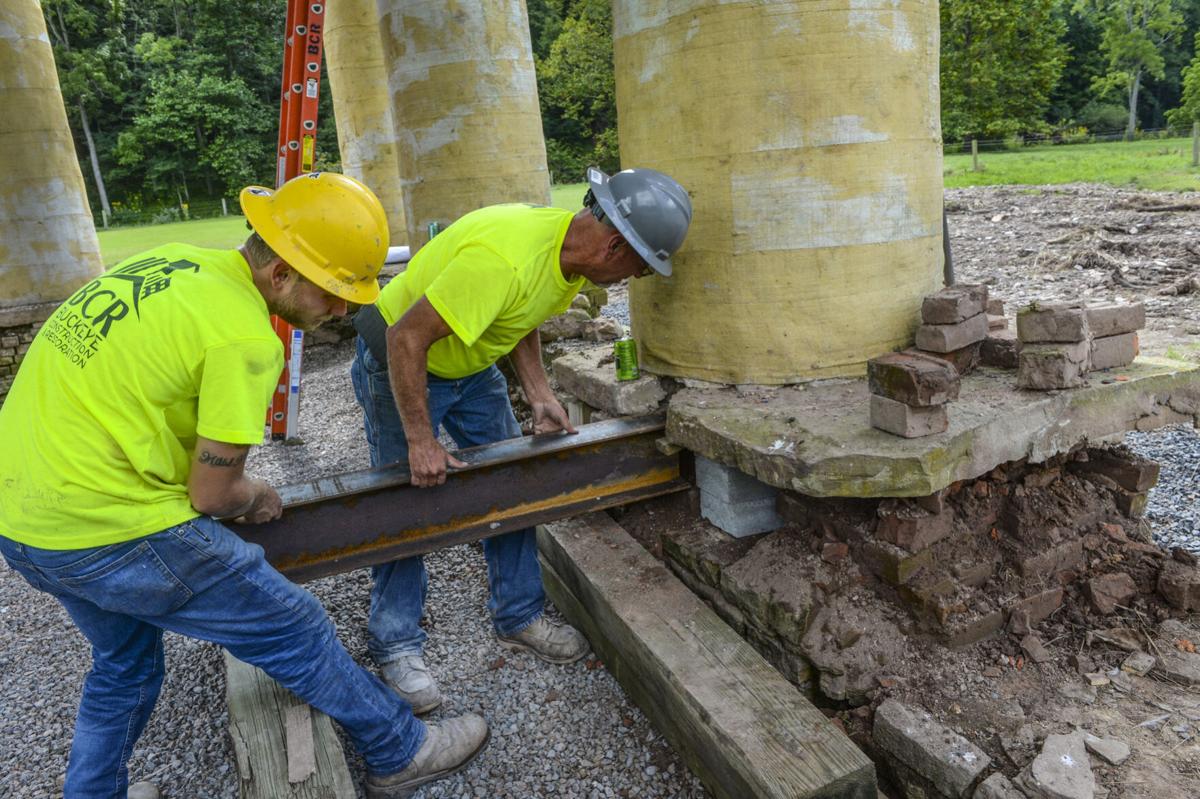 Buckeye Construction and Restoration workers Jerry Bragg (right) and Kyle McClaskey place an I-beam under a pillar to help stabilize it while they remove bricks that are more than 100 years old. 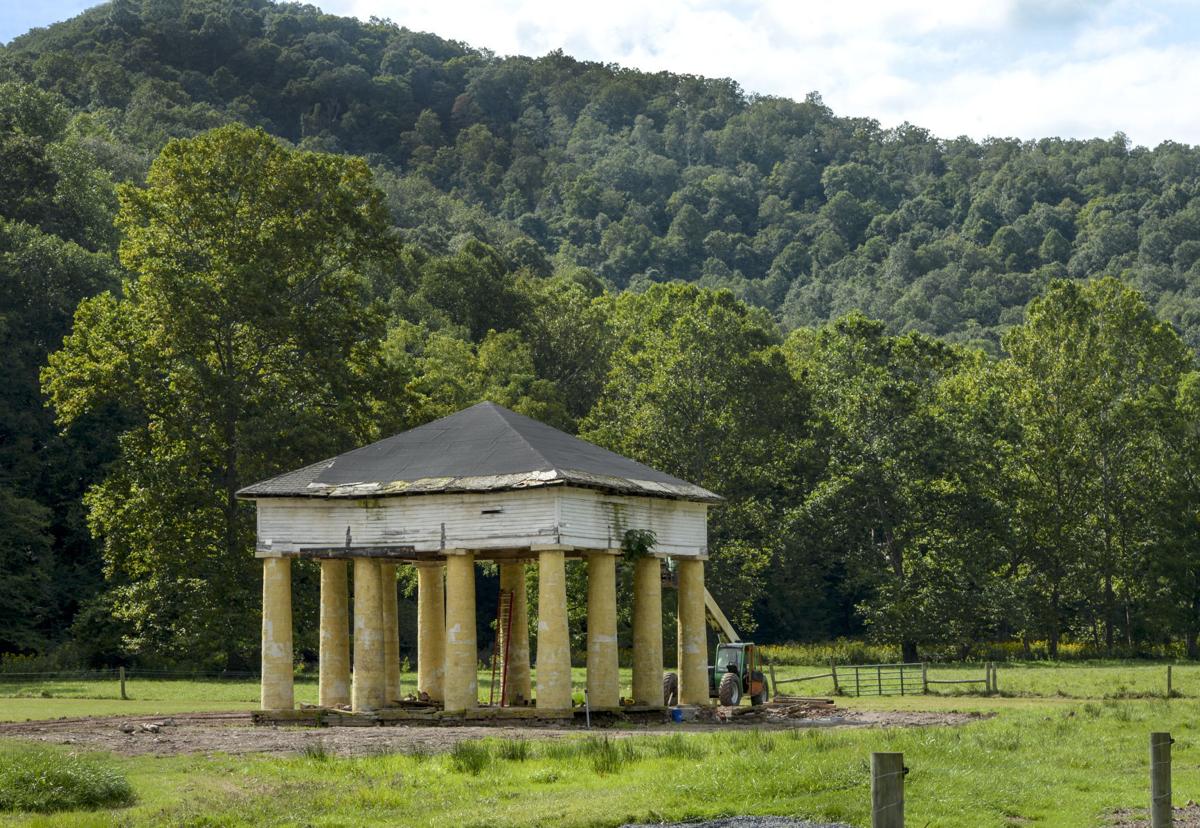 The pavilion at Blue Sulphur Springs stands in a field in Greenbrier County while restoration continues. 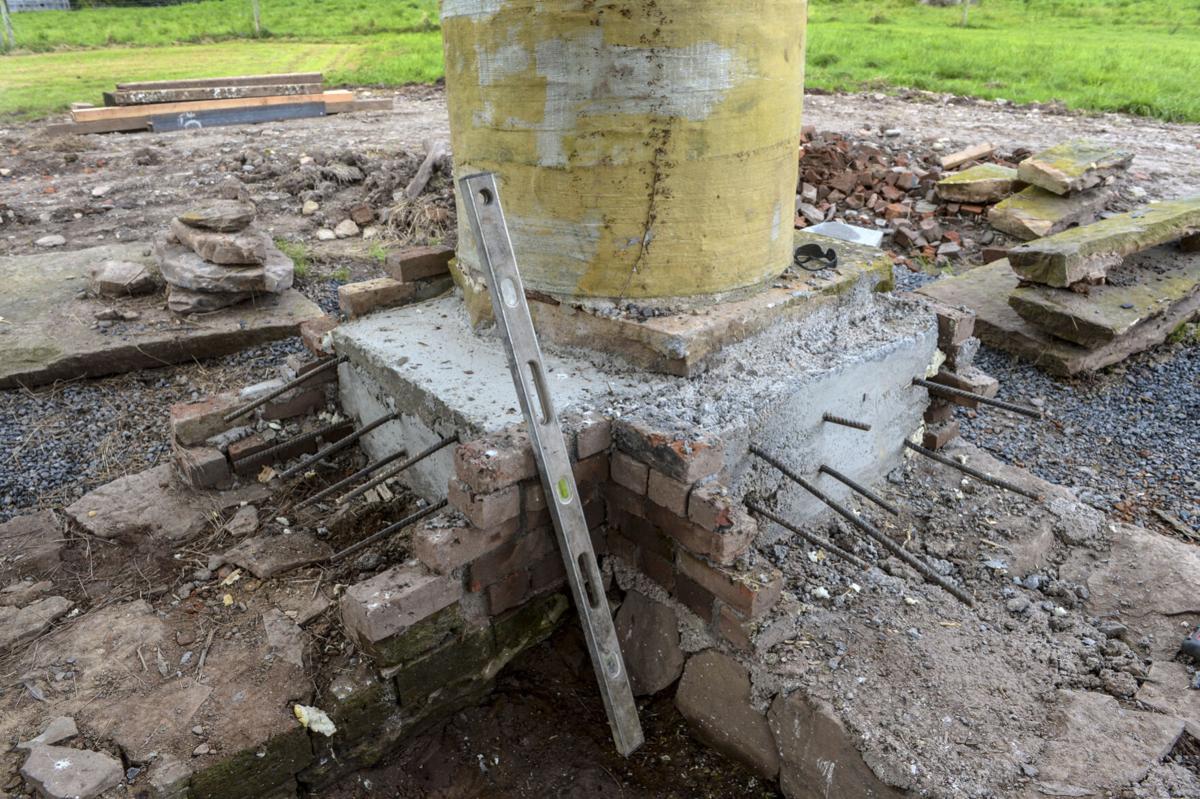 Concrete and rebar is used to stabilize a pillar at Blue Sulphur Springs. 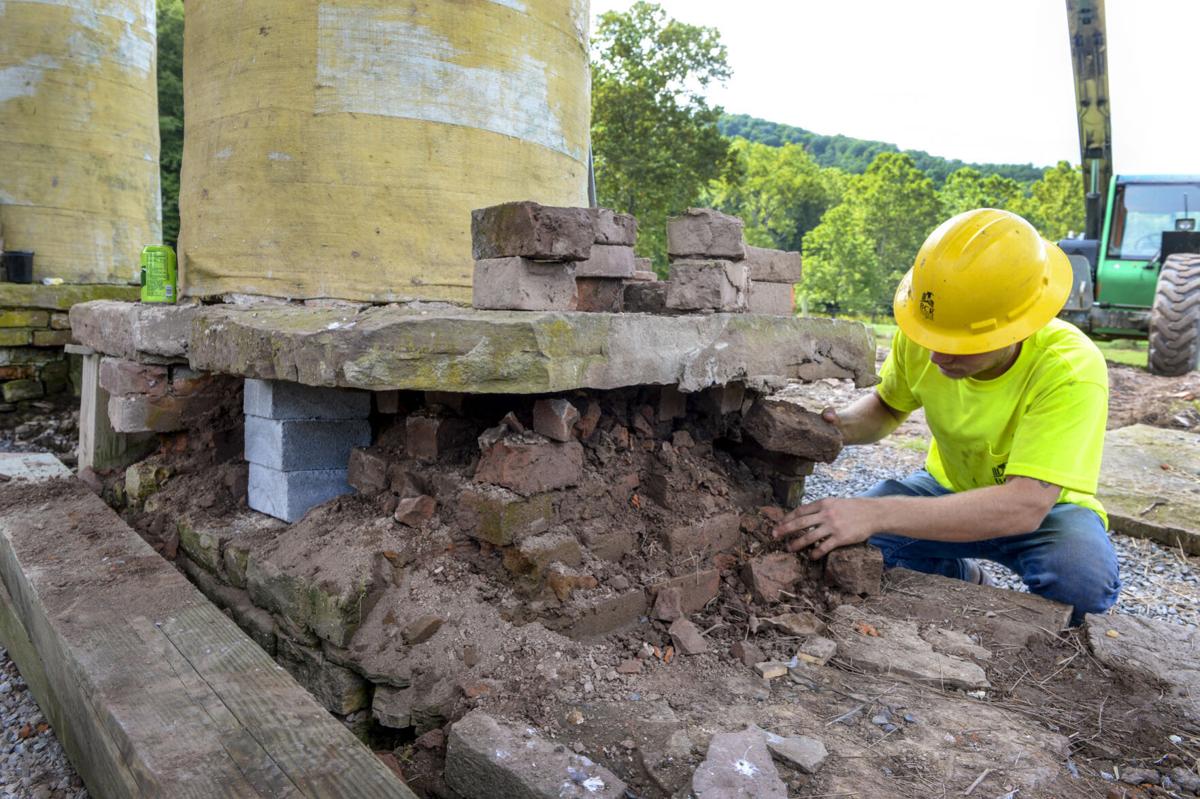 Buckeye Construction and Restoration worker Kyle McClaskey removes bricks that are more than 100 years old from beneath a pillar. 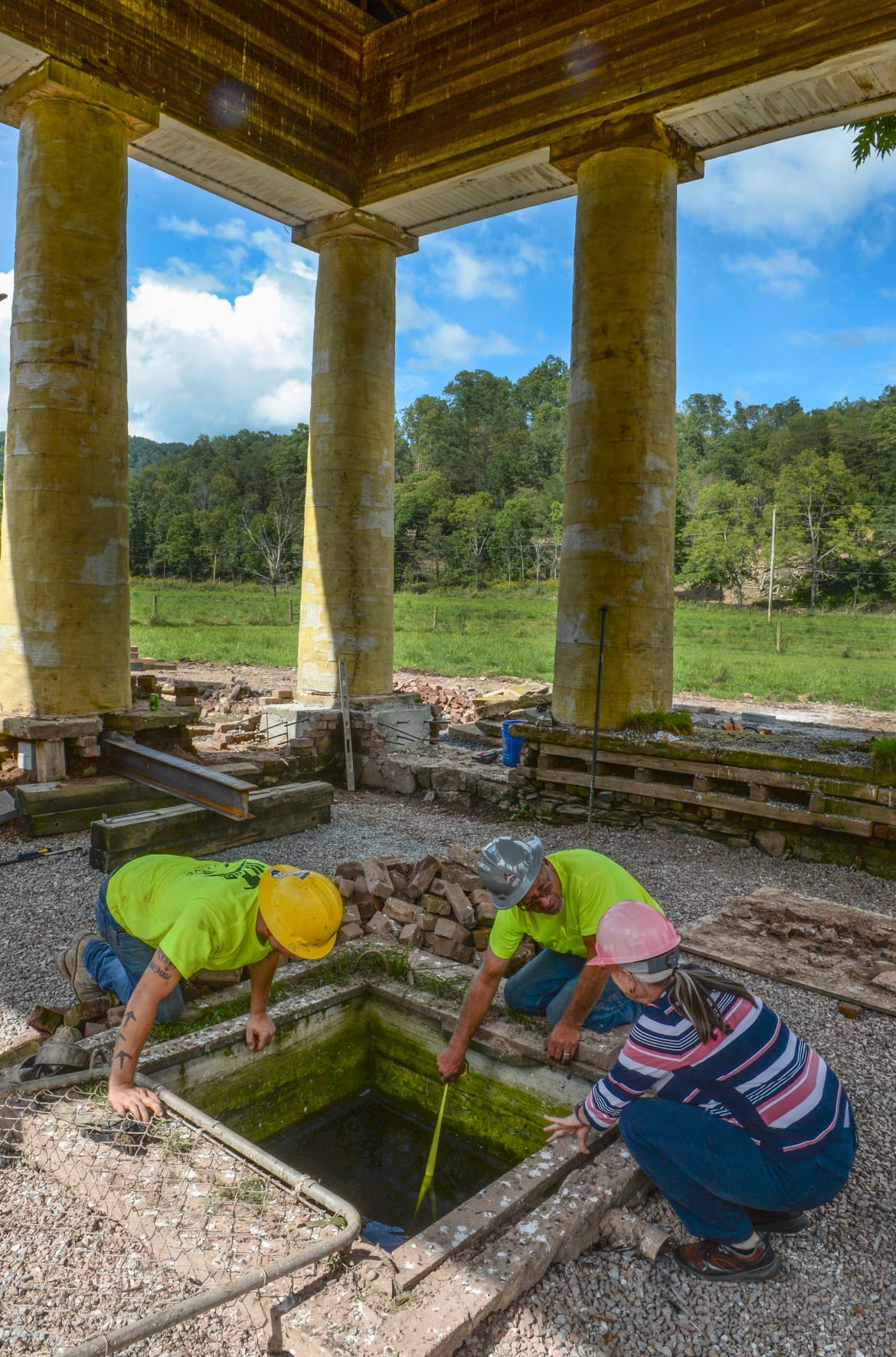 Buckeye Construction and Restoration workers Jerry Bragg (middle) and Kyle McClaskey measure the depth of the water in the spring.

The Blue Sulphur Springs pavilion stands in a field in Greenbrier County while restoration continues.

The pavilion at Blue Sulphur Springs before restoration.

Water in the spring at Blue Sulphur Springs.

Margaret Hambrick looks at drawings of the plans for the Blue Sulphur Springs pavilion restoration.

Buckeye Construction and Restoration workers Jerry Bragg (right) and Kyle McClaskey place an I-beam under a pillar to help stabilize it while they remove bricks that are more than 100 years old.

The pavilion at Blue Sulphur Springs stands in a field in Greenbrier County while restoration continues.

Concrete and rebar is used to stabilize a pillar at Blue Sulphur Springs.

Buckeye Construction and Restoration worker Kyle McClaskey removes bricks that are more than 100 years old from beneath a pillar.

Buckeye Construction and Restoration workers Jerry Bragg (middle) and Kyle McClaskey measure the depth of the water in the spring.

ALDERSON — For 186 years, the Blue Sulphur Springs Pavilion has protected the mineral water fount for which it is named.

Now, the last surviving remnant of a once-thriving resort is itself getting the protection it needs to continue its mission for the next two centuries.

Supported by 12 Doric columns, the roof of the open-sided structure towers 32 feet above a pasture once occupied by a 200-room hotel, an assortment of cottages, and outbuildings in which mineral water treatments and the nation’s first curative mud baths took place. All but the pavilion were destroyed in an accidental 1861 fire and an 1864 torching by Union Army troops.

Since early August, a crew from Waterford, Ohio-based Buckeye Construction and Restoration has been at work in and around the historic pavilion, located nine miles north of Alderson. So far, they have excavated and installed a drainage and sump system around the outer perimeter of the structure, and dug down four feet along the inner perimeter to expose the pavilion’s limestone foundation.

“After all these years, the limestone foundation is in wonderful shape,” said Jerry Bragg, project supervisor for the Ohio firm.

The same can’t be said for the five tiers of brick that topped the limestone slabs or the off-kilter angles assumed by some of the columns. No rods or pins were used to connect the columns to the roof or the foundation. Its builders, Bragg said, “depended on gravity to hold it together.”

Under a previous restoration project, the solid brick columns were re-pointed and snugly sealed in fabric wrap designed to stabilize structures during earthquakes. Cement blocks and thick wood braces were used to temporarily stabilize the pavilion.

The Buckeye Construction and Restoration crew is adding a much more durable fix. As a hoist lift braces the pavilion roof, the columns are jacked up to the appropriate elevation and steel I-beams are placed beneath them to take their weight and keep them in place.

The original bricks and brick debris from the areas between the pillars are being removed and replaced with concrete, poured into forms in which rebar has been placed. The old bricks will then be used as facing for the rebar-reinforced concrete walls.

In addition to the preservation work, the Buckeye Construction and Restoration crew has installed an electrical conduit to the pavilion for use once the project is complete.

Before the work began, archaeologists Steven and Kim McBride conducted a survey of the pavilion and the two-acre tract surrounding it. In terms of artifacts and features, “they found almost nothing,” said Margaret Hambrick, secretary of the Greenbrier Historical Society, which sponsors the restoration work through its Friends of the Blue committee.

Hambrick said she suspects that repeated flooding of nearby Kitchen Creek may have swept away and buried items associated with the early 19th century resort. “They did find a wooden floor inside the pavilion,” she said. “They took a sample of it and then covered up the rest of it.”

The restoration crew found a mother of pearl button, possibly used to fasten an article of clothing of a long-ago resort guest, while digging inside the pavilion. The McBrides sent it to a specialist in an effort to determine the period in which it was used. A more startling discovery was unearthed when the crew found a large black snake resting under a capstone.

The work is being financed through a $30,000 grant from the State Historic Preservation Office, plus private donations.

Crystal clear, 53-degree mineral water, accompanied by the eggy aroma of sulfur, continues to flow through a spring box in the center of the pavilion, the sides of which bear a pale blue tint from nearly two centuries of constant contact.

Built in 1834 in the Greek Revival style, the square pavilion building, its sides 33 feet, 10 inches long, was listed on the National Register of Historic Places in 1992, and added to the Preservation Alliance of West Virginia’s Endangered Properties List in 2013. That year, the two-acre tract encompassing the structure was donated to the Greenbrier Historical Society by Rebecca Fleshman Lineberry, and the Friends of Blue began initial stabilization work.

Opened in 1834, by George Washington Buster, a former Kanawha County sheriff, the Blue Sulphur Springs resort was built on land on which a previous owner built cabins to accommodate visitors who flocked to the spring for its purported curative powers.

“The water was fabled to cure virtually everything,” said Hambrick.

An 1841 flyer promoting the resort described the water as “combining all the sanative qualities and ingredients peculiar to the White and other Sulphur Springs in Virginia,” generating “strong testimonials form highly respectable sources in Louisiana, Mississippi and other states.”

The hotel portion of the resort was described as a 200-foot-long brick structure “with a spacious dining room extending its entire length.”

Travel writer Philip Nicklin, under the pen name Peregrine Prolix, described arriving at the resort at 3 p.m., too late for the regular midday meal, only to have the staff whip up a snack of “beef, mutton, venison, fowls, potatoes, corn, tomatoes, various pastry, preserves, ice cream and Chinese ginger.”

As for accommodations, Nicklin wrote that in 1834, the Blue’s “chambers are furnished with good, thick hair mattresses not yet invaded by the fleas, and he that sleeps on one of them is non fleabit in the morning.”

Many of the resort’s guests were from the Deep South, willing to take on a lengthy journey by riverboat on the Mississippi, Ohio and Kanawha rivers, and stagecoach over the Midland Trail, to reach the cooler mountain climes of western Greenbrier County. Here, they spent their summers, often dividing their stays between Blue, Red and White Sulphur Springs.

Dr. Alexis Martin, a former surgeon in Napoleon Bonaparte’s Imperial Army, was the resident physician at Blue Sulphur during its heyday, and administered cold baths, hot baths, vapor baths and mud baths, among other treatments.

In the 1850s, the nation entered an economic downturn, and Blue Sulphur Springs faced increased competition from similar spas that had sprung up nearby at Red Sulphur, Salt Sulphur and Sweet Springs, in addition to the resort at White Sulphur Springs.

In 1859, Buster sold the resort to a Baptist group, which began operating it as Allegheny College. It operated for only two years until being forced to close by a fire and the arrival of the Civil War.

During the war, both Union and Confederate troops camped at the resort. In 1863, a Confederate regiment from Georgia overwintering here lost nearly 100 men to exposure and disease. Many of them were buried on a hillside overlooking the resort, some occupying coffins made from furniture scavenged from Blue Sulphur’s cottages.

All that remained of the resort, except for the spring pavilion, was torched by Union troops who camped at the site in 1864.

Once the work now underway at Blue Sulphur is complete, the next phase of restoration will likely be replacement of its roof, according to Hambrick.

“We’re told not a board of it is worth saving,” she said.

Once construction is complete, signage will be added for visitors wanting to self-tour the site and learn some of its history.

The pavilion itself could be rented out for reunions, weddings or other events to generate income for upkeep, Hambrick said.

Those interested in following the progress of the restoration may do so by visiting the Blue Sulphur Springs Facebook page. Contributions to the pavilion’s restoration fund may be sent to Friends of the Blue, Greenbrier Historical Society, 814 Washington Street W., Lewisburg, WV 24901.