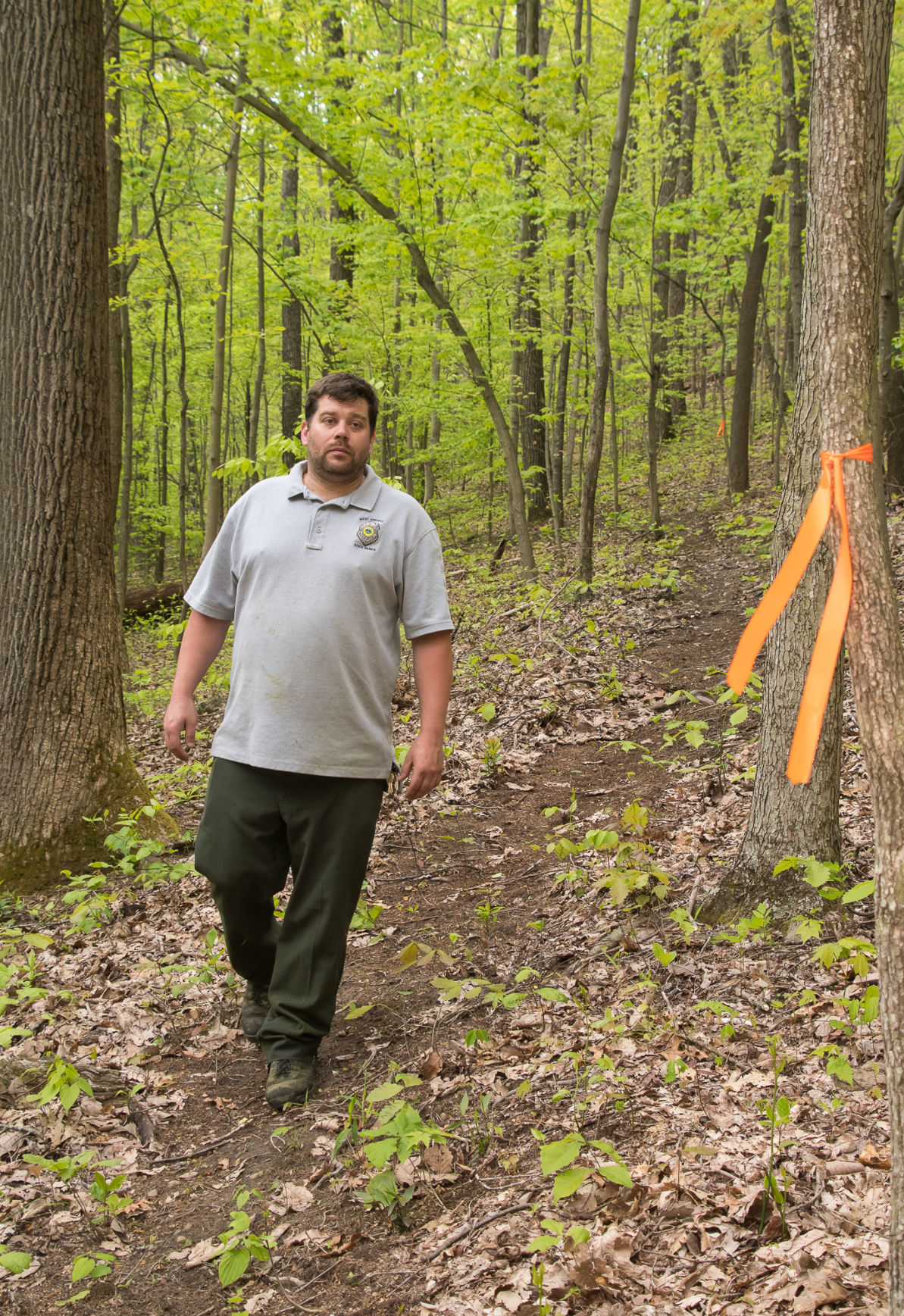 Orange surveyors’ tape marks the course of Laurel’s Trail, an unofficial addition to the Kanawha State Forest trail system. Superintendent Chris Bartley said more than 20 miles worth of “off-the-map” trails have been built in the forest in recent years, mostly by mountain-bike enthusiasts. 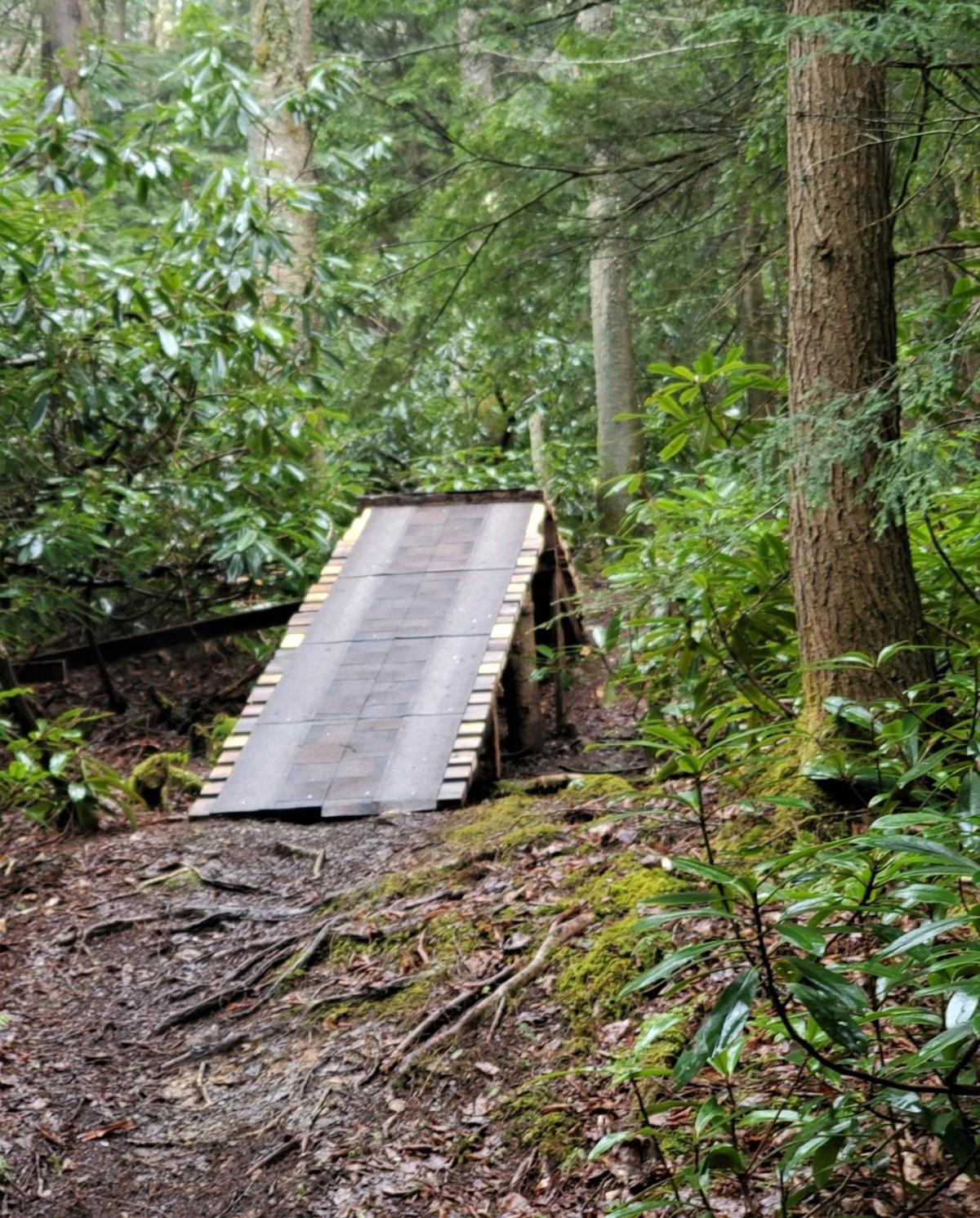 Volunteers have built an unauthorized mountain-bike “flow trail” at Blackwater Falls State Park in Tucker County. The trail includes wooden bridges, ramps and jumps, all constructed by the trail builders.

Orange surveyors’ tape marks the course of Laurel’s Trail, an unofficial addition to the Kanawha State Forest trail system. Superintendent Chris Bartley said more than 20 miles worth of “off-the-map” trails have been built in the forest in recent years, mostly by mountain-bike enthusiasts.

Volunteers have built an unauthorized mountain-bike “flow trail” at Blackwater Falls State Park in Tucker County. The trail includes wooden bridges, ramps and jumps, all constructed by the trail builders.

Just off the Johnson Hollow Trail in Kanawha State Forest, pieces of bright-orange surveyor’s flagging tape mark another trail that comes in from a different direction.

You won’t find it on the park’s official trail map.

Volunteers built that trail, and close to 20 miles worth of others, over the past several years. The work nearly doubled the park’s trail mileage. Parks officials appreciate the help, but they have a message: Please stop, at least for a while.

Chris Bartley, the forest’s superintendent, said he found out about all the new trails not long after he transferred in from Watoga State Park last summer.

“Someone said they saw a bunch of people working on a trail,” Bartley recalled. “I hadn’t heard about it, so I went to check things out.”

What he discovered surprised him. The volunteers said they’d been given permission to construct that trail, and others, by the previous superintendent. After some research, Bartley discovered an “off-the-official-map” trail network that rivaled the forest’s existing 24-mile network.

“It’s a little overwhelming, when you consider that we practically doubled what we had on the map,” Bartley said.

Kanawha State Forest isn’t the only park where ad-hoc trails have been built. At Blackwater Falls State Park, volunteers built a “flow trail,” complete with wooden bridges, ramps and jumps. Steve McDaniel, director of the West Virginia Division of Natural Resources, visited the park recently. He said what he saw frightened him.

“The ramps looked rickety and unsafe, and there were no signs to let people know how difficult the trail is,” he added. “People went onto state park property and cut trees, dug holes and built all that without letting anyone know. You just can’t do that.”

McDaniel said Blackwater and Kanawha are the only places within the state park system where unauthorized trails have popped up, at least so far.

“At many parks, we have volunteers who help with trail maintenance, but they work within an existing plan,” he said. “We’re happy to have people working with us, but we need to know what they’re doing.”

“Director McDaniel is a forward thinker who is always looking for avenues to create new recreation and revenue,” Reed said. “We aren’t a regulatory agency; we don’t want to say no. We have to have oversight, though.”

McDaniel said agency officials “want to embrace all this energy.”

McDaniel said state parks and forests that have at least 15 miles of trails will qualify to have “trailmasters,” employees dedicated specifically to maintaining the trail network.

At Kanawha State Forest, where there now are 44 miles of trails, maintenance has become a very real issue.

“We’re faced with the task now of having to go in, name all these trails, mark them and blaze them so that people can enjoy them the way they’re meant to be enjoyed,” Bartley said. “We also have to get our trail map updated to include them.”

Having an accurate map, he added, is more important now than ever.

“It’s a safety issue. If, God forbid, someone gets lost or hurt on our trails, we need to know where to send searchers or paramedics to help them,” Bartley said.

Until all the ad-hoc trails are properly named, marked and on the map, Bartley said, no further trail building will occur.

“I’ve explained to the Kanawha State Forest Foundation Trails Committee that we need to take care of what we have first, before we can even consider any additional trails,” he continued. “Once we get to that point, if we feel there’s a need to add any more, any additions will need to come to me, and I will need to pass them along to my bosses for the necessary approvals.”

“We want to embrace all this [volunteer] energy, not eliminate it,” he said. “We just want to get people involved in the planning process, as well as in the trail-building process.”